4 Month Update: A Day In the Life

My little boy is officially four months old. How did this happen?! Instead of a “My Mommy Mind” post to mark the occasion though, I thought I’d write a “Day in the Life” post so you can see what we’re up to everyday. 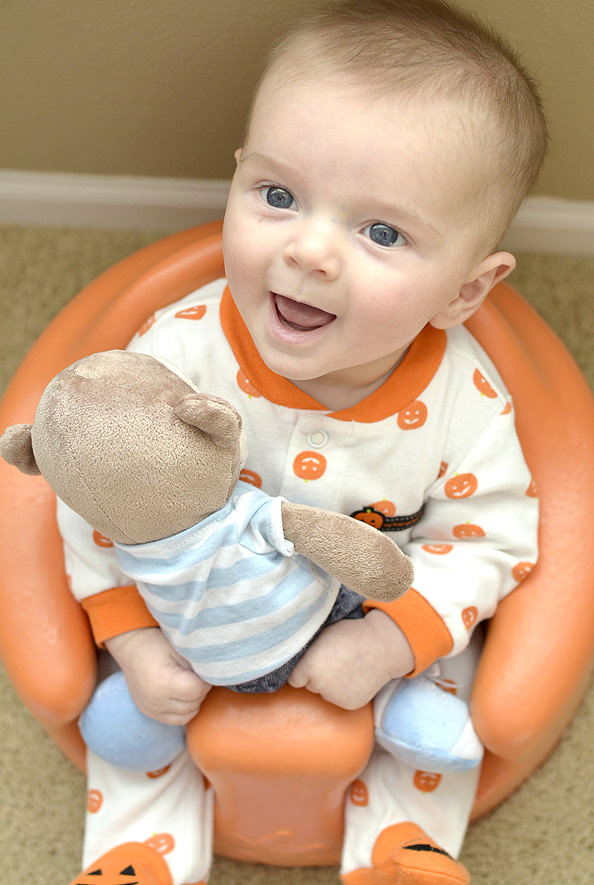 Over the past month or so we’ve finally gotten into a routine that we can all count on, more or less – until the day I decide to record it, of course! I’ll let you read on to find out what a day in the life of work at home mom of a four month old looks like! 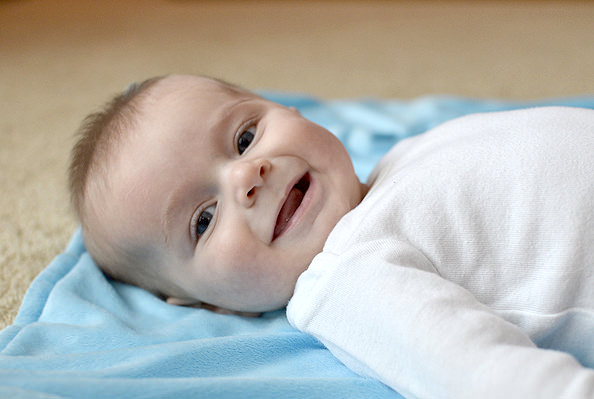 1:15am: My day starts at the ungodly hour of quarter past one with a wakeup call from a hangry baby. This is unusual as Lincoln has been sleeping until at least 3:30am before needing to eat. Me thinks the four month sleep regression is on the horizon which, from what I’ve read, means every nap and nighttime sleep strategy we’ve worked so hard to develop over the past month is about to go to hell in a hand basket for the next 2-3 weeks. Awesome.

5:15am: I hear Lincoln crying again. After I put him down at 1:30, I went to the couch to sleep (ahem, someone was sawing logs.) When I got back upstairs to see what was going on, Ben tells me he’s been up pretty much every 30-45 minutes since 1:30. The 4 month sleep regression is definitely here – BLARG. I take over and feed Lincoln, get him back down around 5:45, then head to bed to catch another hour of shut eye before he’s up for the day.

7:03am: Our day has “officially” begun! I start counting down the days until Google comes out with contacts to replace their glasses so I can blink to take snapshots of Lincoln’s morning smiles. No matter how the previous night went, my heart instantly melts when I see his enormous grin.

7:15am: We head downstairs then open all the blinds before I set him on his activity mat to play while I clean up the kitchen and make coffee. I met with a new friend last week and she asked how my kitchen always looks so tidy in the pictures on my blog. Here’s my big secret – cropping! This is how my kitchen usually looks, especially in the morning: 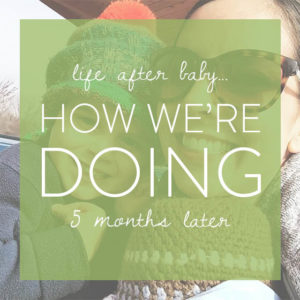 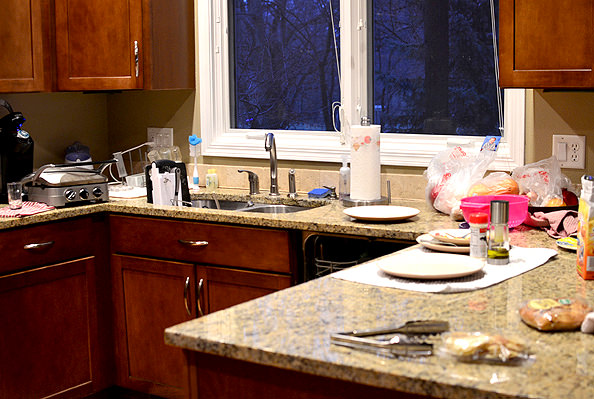 There’s a sound warp that goes directly from our kitchen to Lincoln’s bedroom so if we’ve made a mess after dinner we usually clean the kitchen the morning after. The previous night Ben and I had randomly decided to make microwaved potato chips (which were amazing) and, while they were a huge success, the kitchen was a disaster zone when all was said and done. 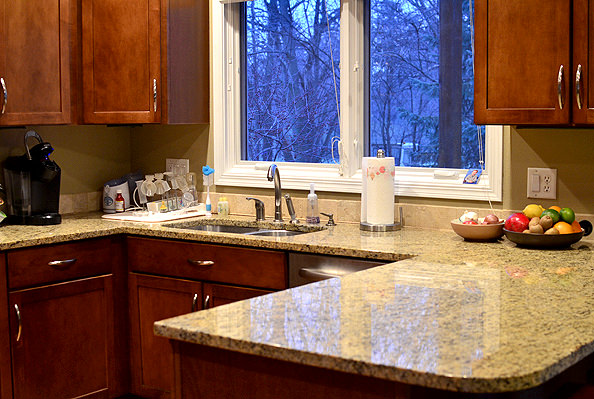 10 minutes later it’s clean so I go to feed and play with my little nugget. 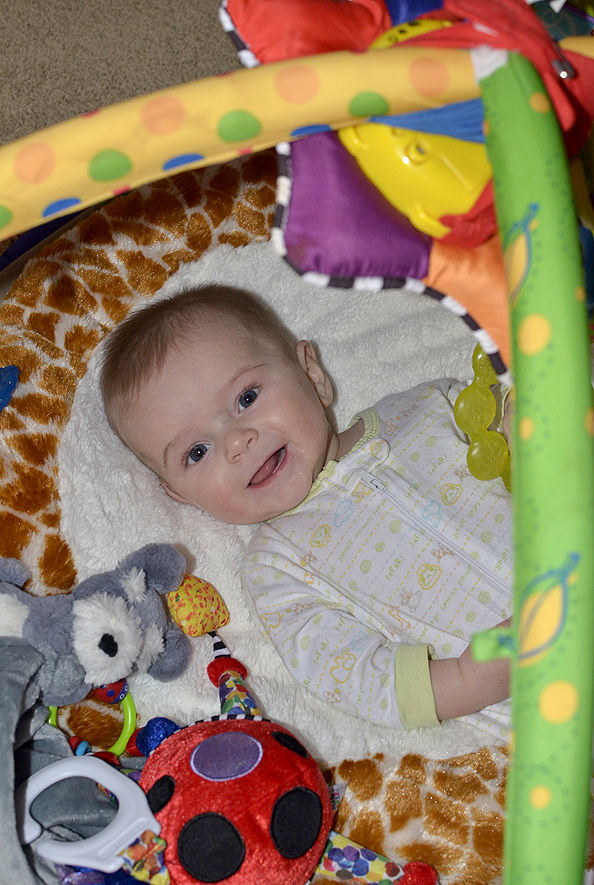 8:05am: Lincoln starts rubbing his eyes so we go up to his bedroom and I walk around with him until he’s drowsy. After I put him down in his bassinet he instantly starts hiccuping. #$%! 10 minutes later the hiccups have stopped, but then Ben tiptoes in to say goodbye and Lincoln wakes back up. And starts hiccuping again. Double @%*! My arm is about to fall off so after another few minutes of bouncing I put him down in his bassinet awake, hoping he’ll fall asleep on his own. He doesn’t. I go back up and after 1 more minute of bouncing, he’s out. A process that usually takes 5 minutes, has just taken 30. Cest la vie! I head off to pump/eat breakfast/answer emails/start a post/return some calls, and then shower for the day. 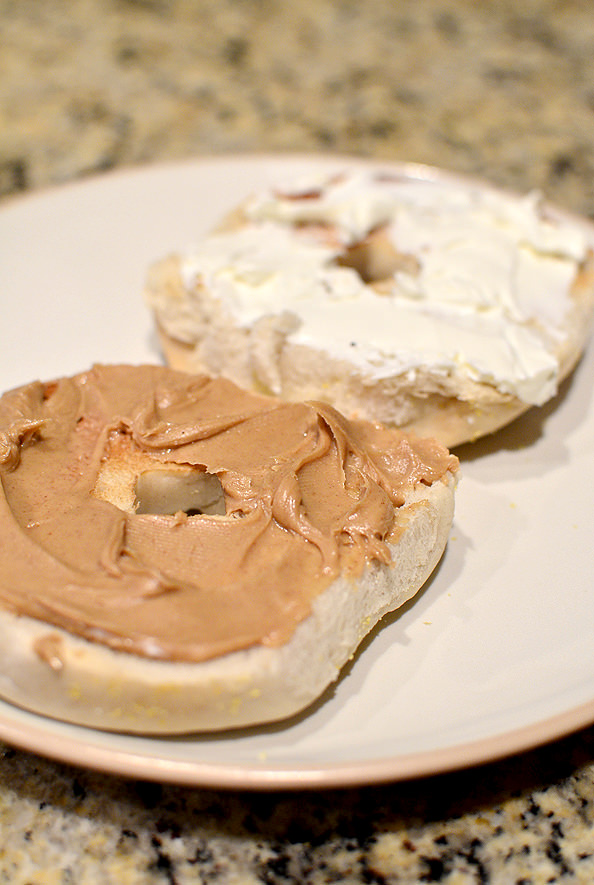 9:15am: Lincoln wakes up crying instead of cooing which means he’s still tired. I pop a pacifier in his mouth then rock him for 15 minutes before he’s finally back out. That took longer than usual. I finish getting ready then head downstairs to start prepping ingredients for a blog dish I’m testing today. 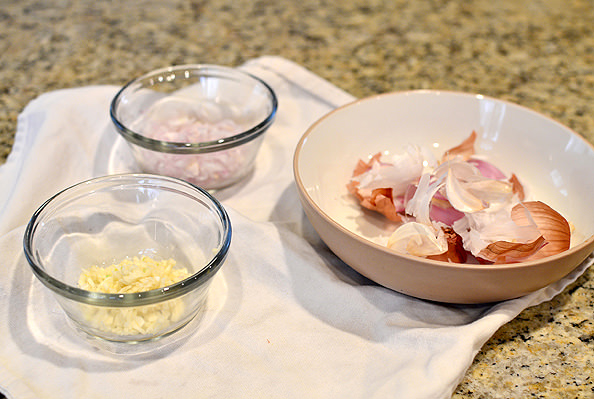 10:15am: Hooray! I got another 40 minutes out of Lincoln, and he wakes up much happier. We play on a blanket, getting in some tummy time and rolling practice before nursing. 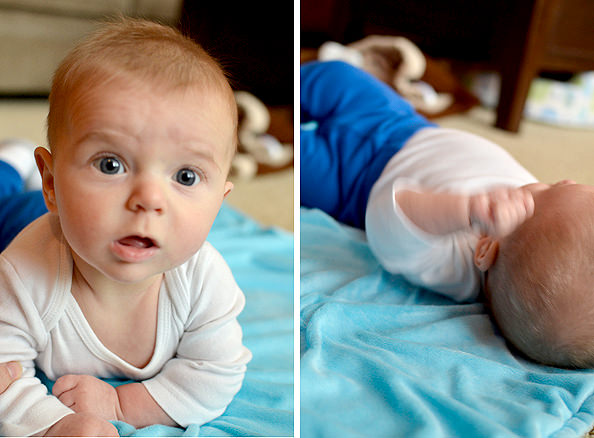 Lincoln has dessert, my wrist, while I check some emails one-handed then try to figure out how/when/why a feature on the blog is no longer working. Email my developer to see what he has to say. 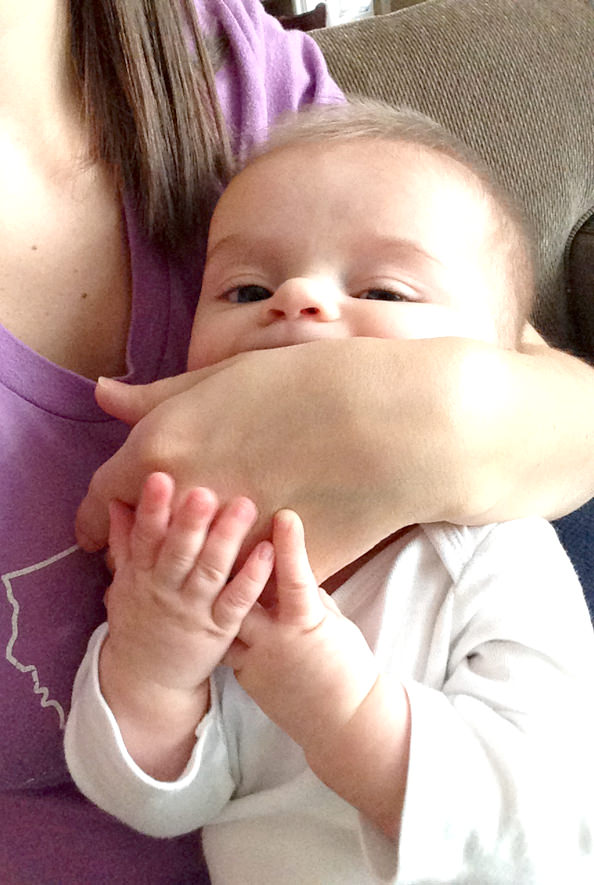 11:35am: Lincoln rubs his eyes and starts to stare into space so I take him up to nap. Five minutes of rocking later and he is asleep. I head down to start cooking the blog dish I’m testing but before that I throw in a load of laundry, scarf a Chobani, then chug a glass of water. I look at the clock and can’t believe it’s almost noon. Where has the morning gone?! 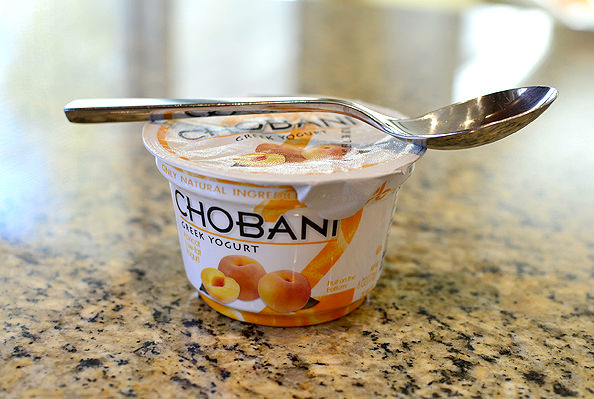 12:15pm: The dish was a flop – good enough to eat for lunch, but not blog-worthy – and just as I’m cleaning up the little man wakes up. It was a super short nap, but he’s smiling on the monitor. I don’t know about other moms but my main concern throughout the day is making sure Lincoln is sleeping enough. If he sleeps well during the day, generally he’ll sleep well that night. If he doesn’t sleep well during the day, I have no idea how the night will go. I usually aim for 4 hours of naps during the day, today especially since he slept so poorly last night, which has been yielding decent nighttime sleep. Hope he meets his quota today…

1:15pm: After an hour of play, including under his new elephant mobile from our friend Jess, which he LOVES (seriously I’m putting off hanging it in his room somewhere, probably above the changing table, because he’ll laugh and giggle under it for like 20 minutes. Easy entertainment, FTW!) we head upstairs for his third nap. 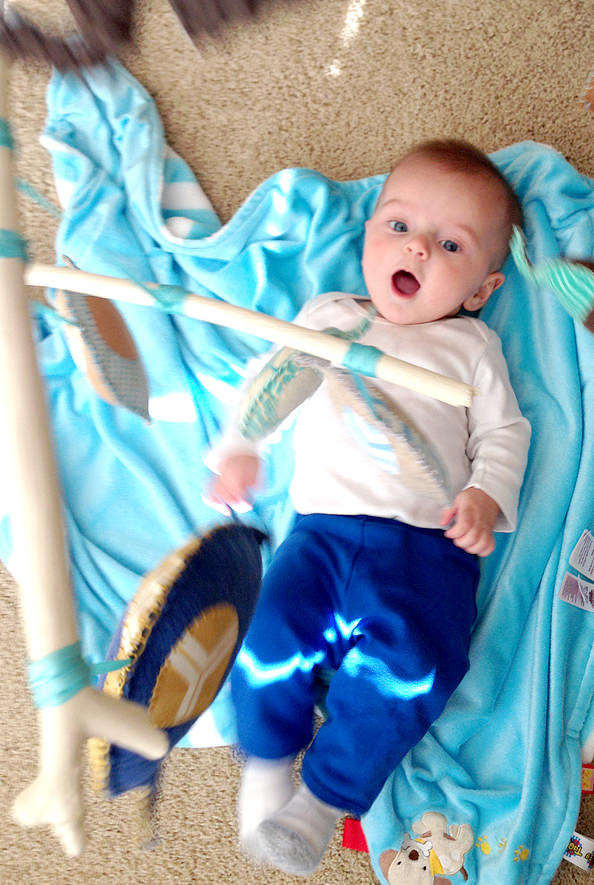 1:25pm: I switch the laundry over, snag a CLIF bar for a snack, then dig into my work for the day. I need to write a freelance post, come up with 25 things about me for a feature a local company has contacted me about, answer a few urgent emails, and then meal plan for next week. Ready, set, GO! 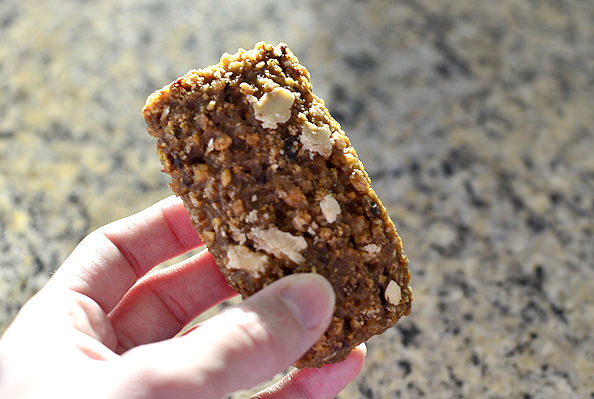 3:45pm: Epic nap! I had to go in a couple of times after the one hour mark – once because the garbage truck noisily rumbled by, the second time because he’s just not sleeping the best today. Regardless, I’ll take it, and I got a ton done. He nurses right away then I discover a way to make at him laugh (come at him with wiggly fingers saying boogey boogey boo!) so we repeat x100 because the sound of his laughter makes me happier than pretty much anything in the world. After the novelty finally wears off I pull him into the kitchen with me so we can start prepping dinner while listening to Christmas music. Restaurant-Style Chicken Tortilla Soup is on tap!

5:00pm: Like clockwork, an hour and 15 minutes after he wakes up, Lincoln starts rubbing his eyes again. We head up for a quick catnap, then he gets the hiccups again. SON OF A! Luckily Ben walks in the door just then and takes over so I can go finish dinner and catch up on emails.

5:50pm: Lincoln’s up. Perfect timing as I usually like his last nap to be short, sweet and never go past 6pm. Ben gets him then they entertain each other for about 30 minutes while I eat some dinner. 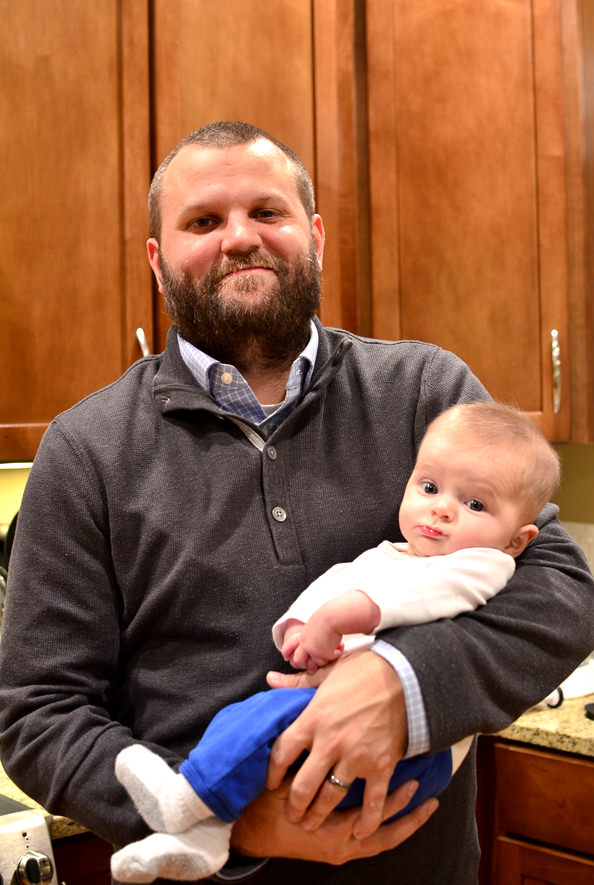 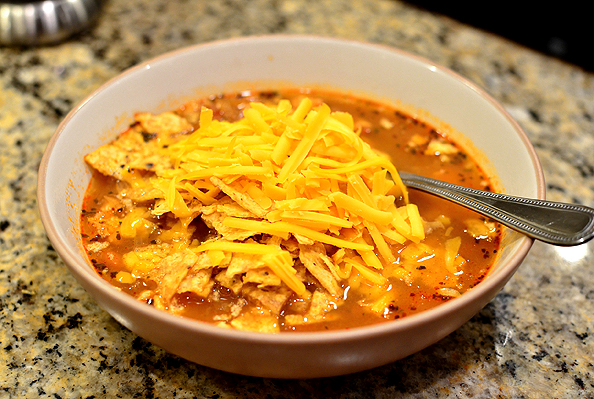 6:20pm: Eye rubs are in full effect. It’s not a bath night so I wash Lincoln’s face and hands then change him into his PJs and we read several books. He’s really loving them tonight, flapping his arms up and down as I flip the pages. So cute. We get up to get him in his swaddle then nurse but he wants NO part of it. Several minutes of shrieking later he’s finally eating. 10 minutes later he’s asleep, and by 6:50 I’m tiptoeing out the door.

7:00pm: He’s back up. I am cursing the 4 month mark. He’s down again three minutes later so I head back down to answer emails. Ben’s run off to the store for me while I put him to bed to pick up supplies for a freelance recipe I need to make tonight. I am tired but it involves Oreos so I’m not that mad.

8:00pm: We snack on mini magnum gold bars (so good) before finally shutting down shop and catching a few DVRd episodes of Modern Family. Ben finally convinced me to start watching it recently and OMG WHAT HAVE I BEEN WAITING FOR?! Best show on television – I am obsessed! 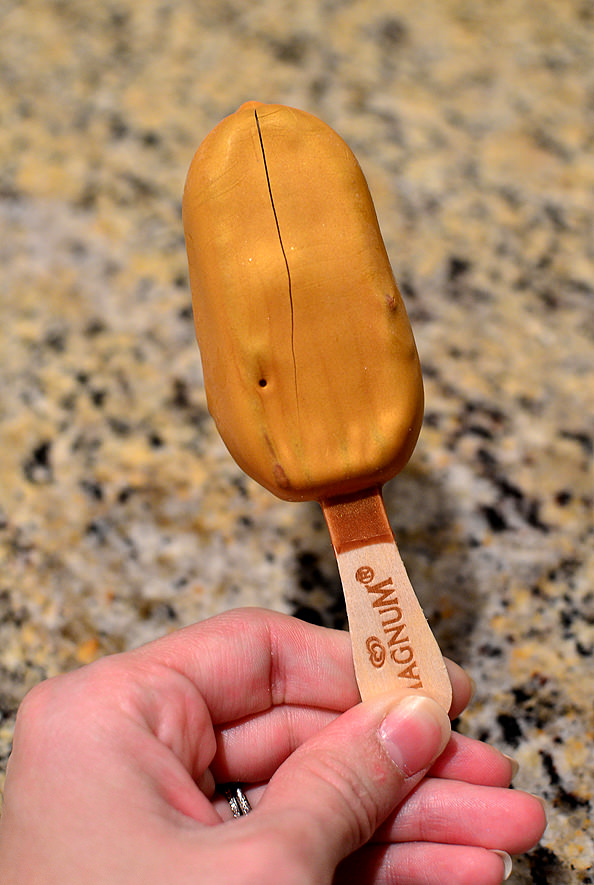 9:15pm: I head in to nurse Lincoln for the last time. He goes right back down so both Ben and I head to bed. My to do list is far from being done, but we are beat! I make a mental note while brushing my teeth to um, leave the house at some point tomorrow, eat more fresh fruits and veggies, and also to read Lincoln a few more books. Ben and I kiss goodnight then wish each other luck for the night ahead. I am asleep before my head hits the pillow.

So there you have it! This was a pretty typical day as far as playing, working, housework, etc, but atypical when it comes to sleep. Lincoln was fussier than normal at all nap times, taking way longer than usual to go down, and also waking up in the middle of his naps which is also not the norm these days. Fingers crossed it’s just a phase…as pretty much all my concerns thus far have been!