Brown Butter and Crispy Sage Popcorn is an addicting, and crunchy gluten-free snack. 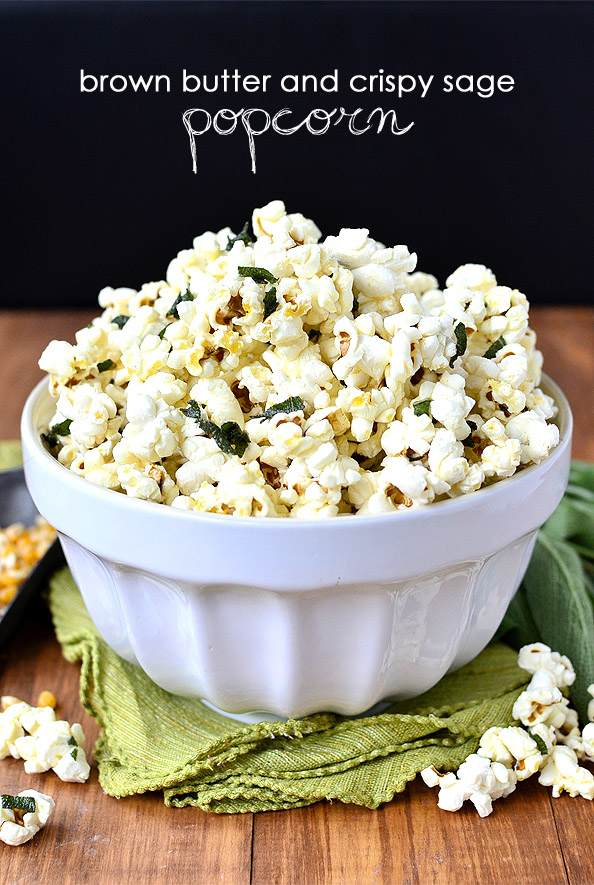 Raise your hand if it’s unseasonably cold where you live and all you want to do tonight is convince your spouse/significant other/best friend/dog/cat/goldfish (I suppose those labels could potentially overlap,) that it’s a good idea to light a fire then curl up on the couch with a blanket, movie, bottle of Cabernet and stuff your face with Brown Butter and Crispy Sage Popcorn?

So glad we’re on the same page.

We went from hottest week of the summer two weeks ago to near record low temps this week. We’re talking highs in the 50s people. The 50s! I submitted and celebrated by ordering my first hot latte in months then tested a recipe idea that’s been burning a hole in my Evernote’s “to make” list for over a year. Brown Butter and Crispy Sage Popcorn is all-fall and FABULOUS! 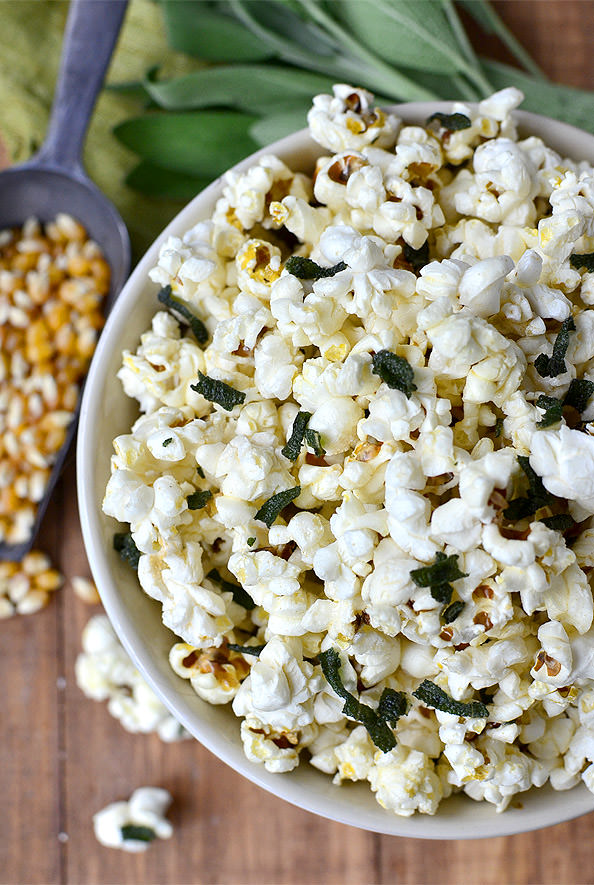 One of my favorite things about food is that it can conjur up so many memories with one taste. I am transported to my Grandparent’s retro kitchen in Ohio every time I make my Grandma’s Chicken Noodle Soup, and nothing takes me back to summertime as a kid quite like my Mom’s classic Dirt Cake.

Popcorn is another food that holds a lot of memories for me. Whether it was my parents making batch after batch for family movie night when my brothers and I would crowd the living room floor in our sleeping bags when we were little, to the big yellow bowl drenched in melted butter my best friend’s Mom (Hi Becky!) made us girls when we’d come over for our super-cool Saturday nights in playing Mario Cart and watching Alex Mack in high school – the crunchy stuff’s definitely got a big place in my heart.

But this version, you guys. This version. Ho-ly smokes – it is next level! 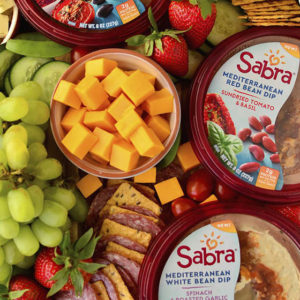 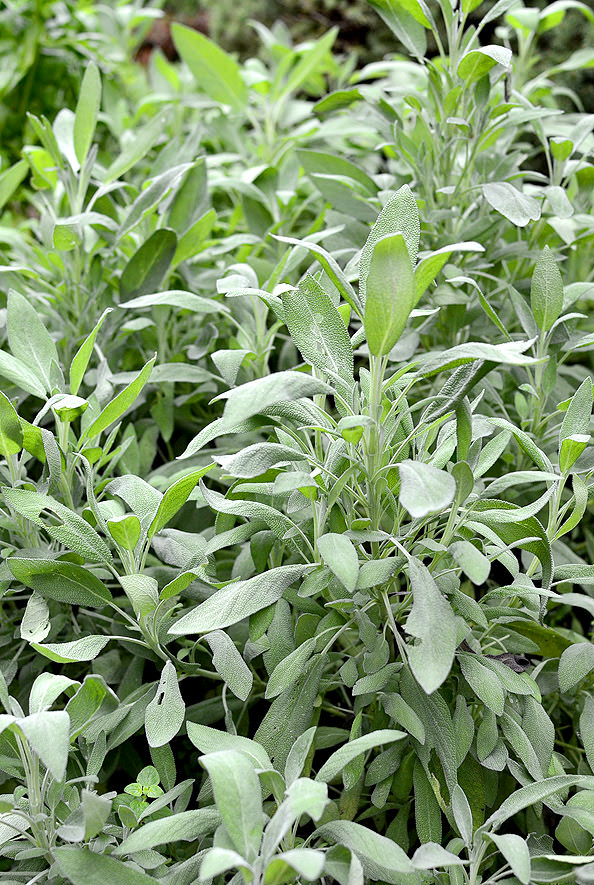 Air or stove popped popcorn is tossed with fresh chopped sage that’s been crisped in brown butter, then finished with a flourish of salt. I seriously could not stop eating this popcorn. At one point after the second “I’m officially done” washing of the hands, I found myself leaning over the bowl, snagging pieces with my tongue like a lizard.

If I didn’t make this popcorn myself I’d question why it’s so addicting. Like, is someone trying to pull a fast one on me? I know of course that it’s the brown butter, which is simply melted butter that’s cooked for a minute until it turns golden brown, that made me go back for bite after bite, amplified by crispy sage that might actually be my favorite part. In my mind sage is synonymous with Thanksgiving, and thus fall, making this popcorn a perfectly timely treat.

In response to how delicious this popcorn recipe is, and the fact that Awkward returns on September 23 – YOU’RE WELCOME. 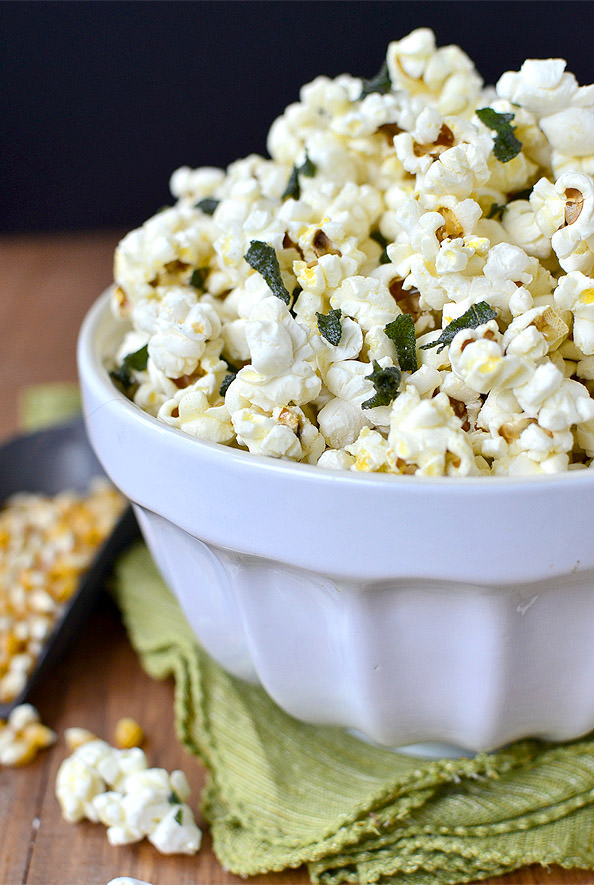 Start by popping 1/2 cup popcorn kernels. You can use an air popper (this is the one my Mom used to make our movie-night popcorn. I had to borrow it because my air popper mysteriously disappeared last week. Seriously, WHERE IS MY AIR POPPER?? I am so disturbed.) 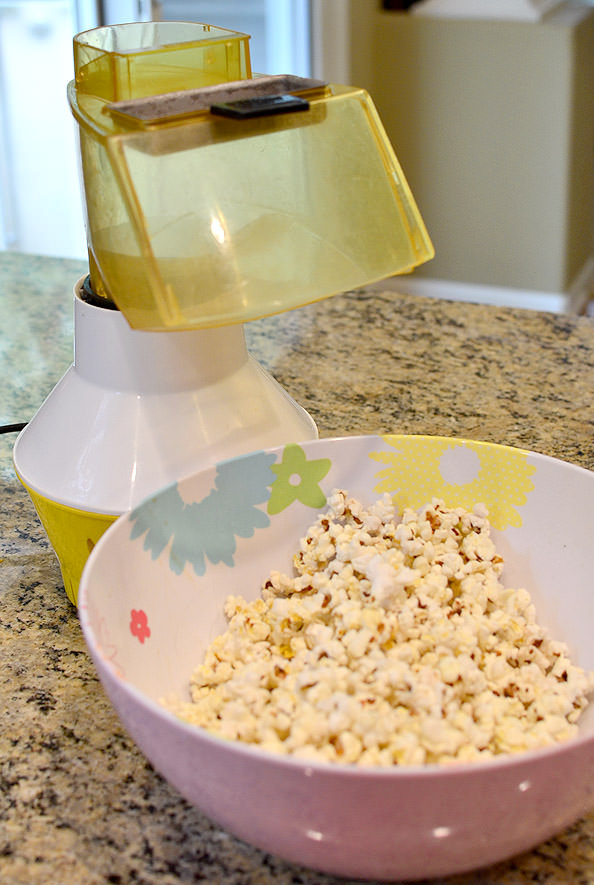 Or, if you don’t have an air popper, you can make popcorn right on the stove in a big pot or Dutch Oven (or in a paper bag, but that’s for another post.) I used a 4 quart Dutch Oven with a 9″ diameter. Use something similar in size and you’ll be just fine! 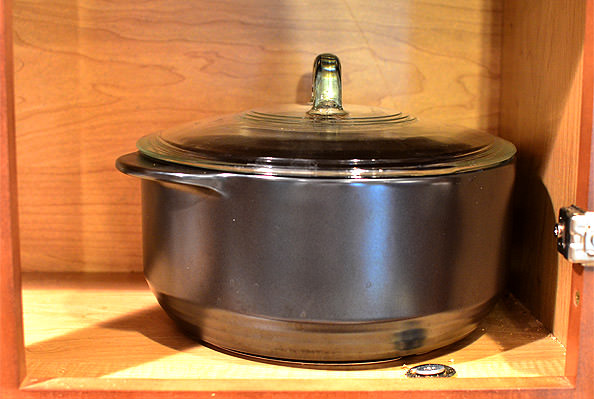 Start by adding 3 Tablespoons oil to the pot then add a few popcorn kernels to the bottom, turn the heat to medium, and then place a lid on top. If your pot is wider than 9″ you may want to add an additional Tablespoon oil. The kernels shouldn’t be swimming in oil, but they should have a nice cushion. 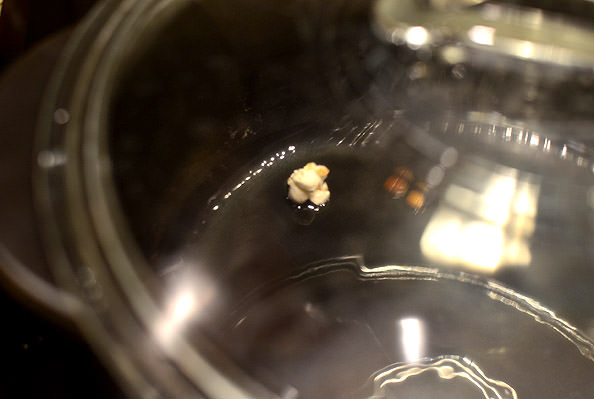 I use grapeseed oil for my “vegetable oil” needs over canola or vegetable oil (here’s why.) Grapeseed oil is nearly flavorless and I couldn’t detect any added flavor in the popped popcorn. 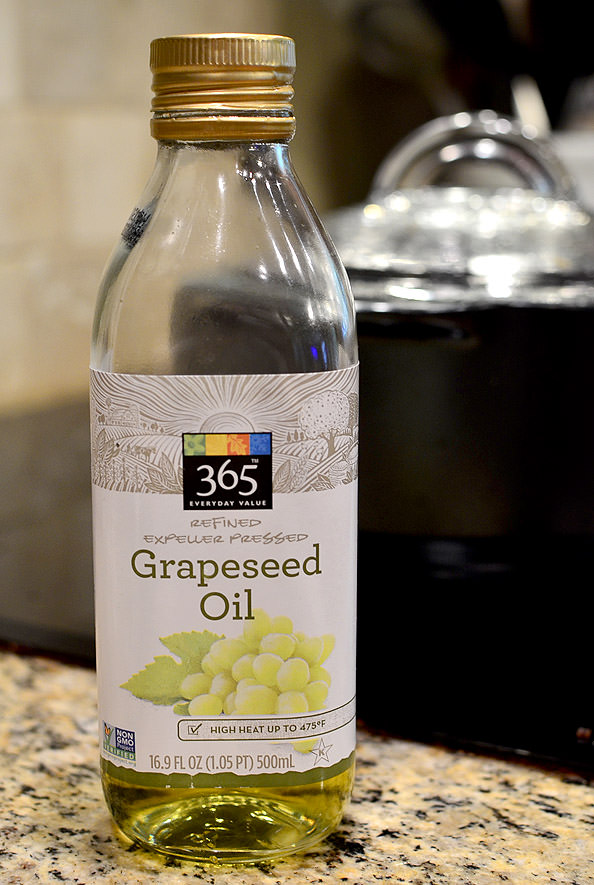 I tested popping the popcorn in extra virgin olive oil because it’s one of the most common oils people have in their pantry. It worked great though there was a faint EVOO flavor in the final popcorn. Not bad by any means (I think EVOO is delicious!) but just FYI. 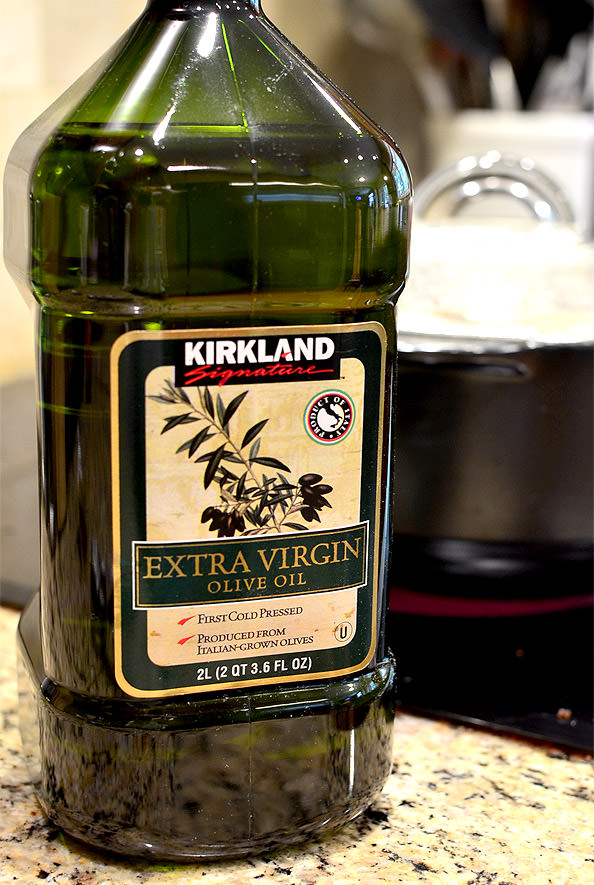 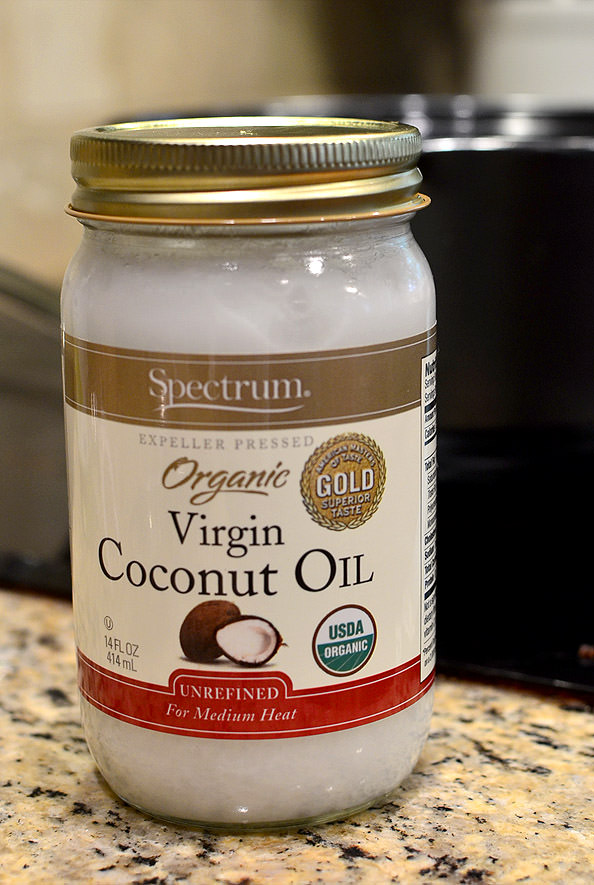 My little brother (who just moved home from Denver – whoop!!) was over when I was recipe testing and LOVED the coconut flavor! (Pay no attention to the toy barf in the background.) 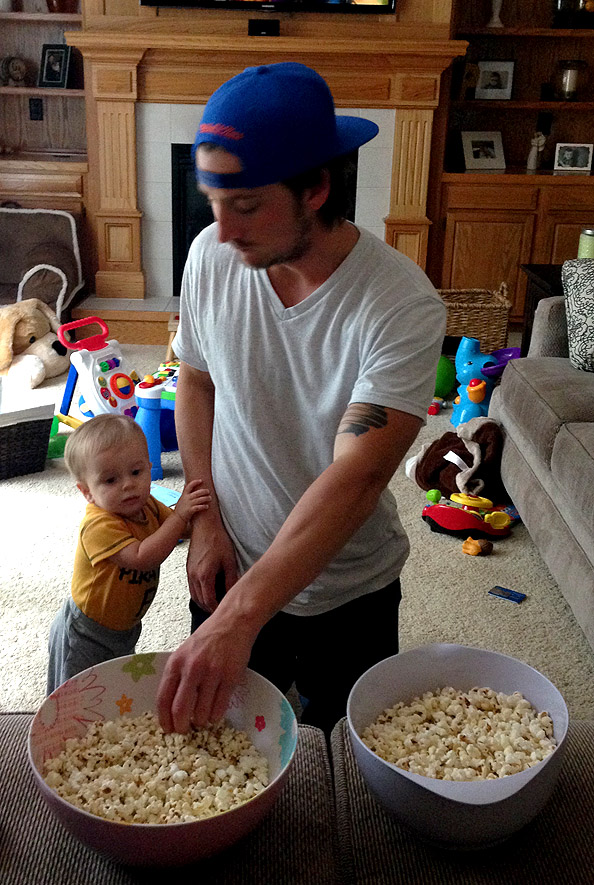 Anywho! After heating the oil of your choice with a few popcorn kernels, wait for one of them to pop then add 1/2 cup kernels to the pot. Shake the pot over the burner to make sure every kernel is coated in oil then continue shaking/moving every so often to prevent burning. 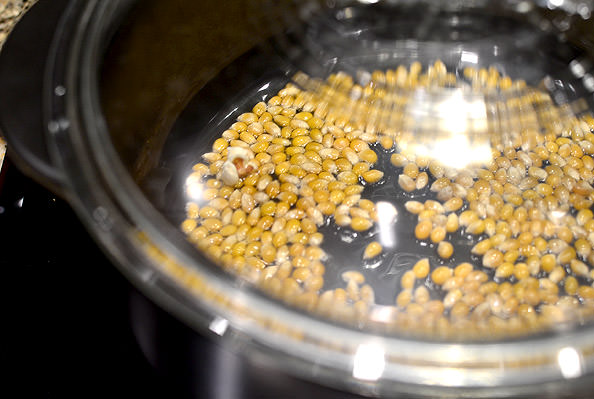 After a few minutes you should start to see something happen! (Press play, yo.)

Keep moving and shaking the pot every 15-20 seconds until the popping slows down then remove the pot from the heat and keep the lid on until the popping stops. Voila – stove top popcorn! Pour the popcorn into a large bowl then set your sights on that brown butter and crispy sage. Oh yeah. 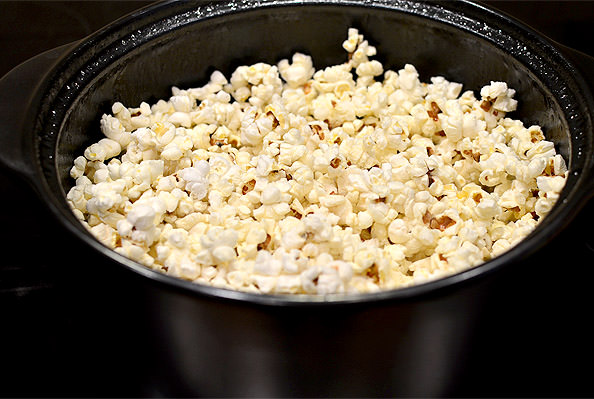 I’ve probably told you a hundred times that we have a beast forest of sage growing in our backyard. People always ask me what to do to keep it growing. (Wait for it) news flash: absolutely nothing! I have not touched it once this summer and it just keeps growing like a weed. In fact, I’m sure before people started cooking with sage it was considered a weed. This stuff cannot be stopped and comes back year after year. Love it! 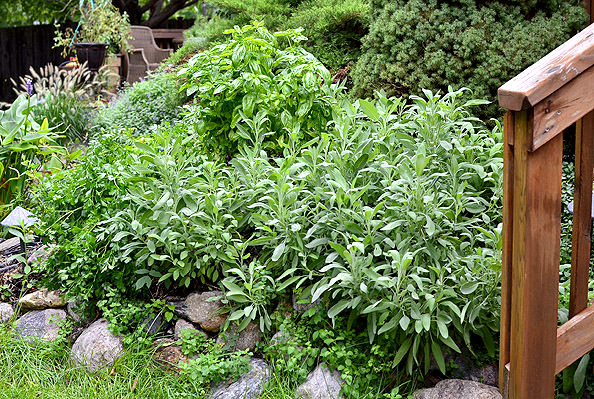 You’ll need a heaping 1/4 cup chopped sage for the topping, which is 10-12 large sage leaves. Sage is so beautiful. Nature’s velvet. 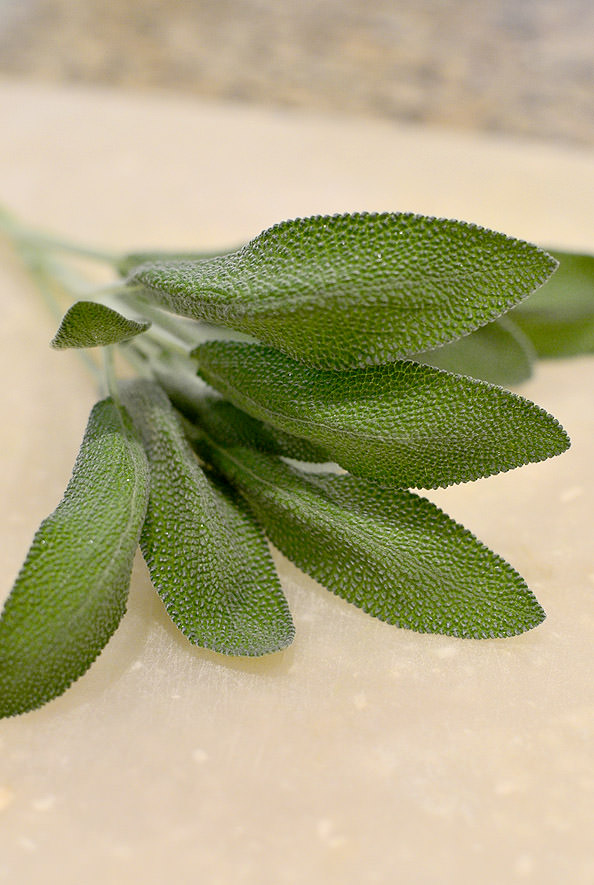 Melt 3 Tablespoons butter in a skillet over medium heat then, when it begins to foam, add the sage and swirl the skillet until the butter turns golden brown, 1-2 minutes. 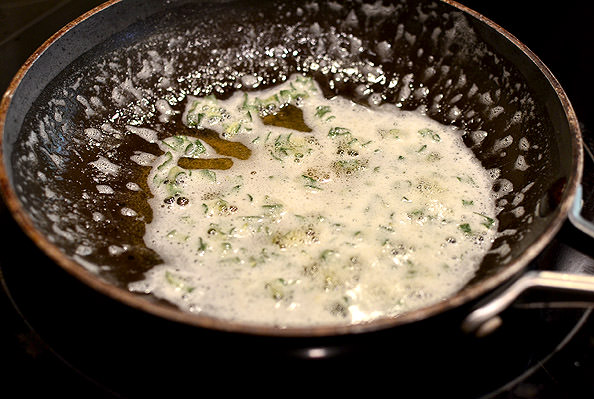 Pour the brown butter and crispy sage over the popped popcorn then toss with a spatula to coat each piece. 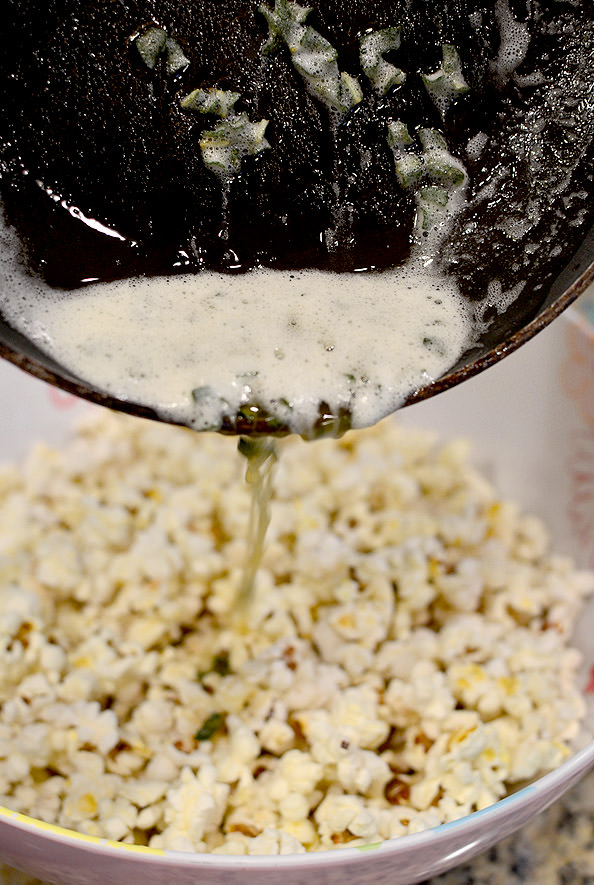 Sprinkle with salt then serve immediately! 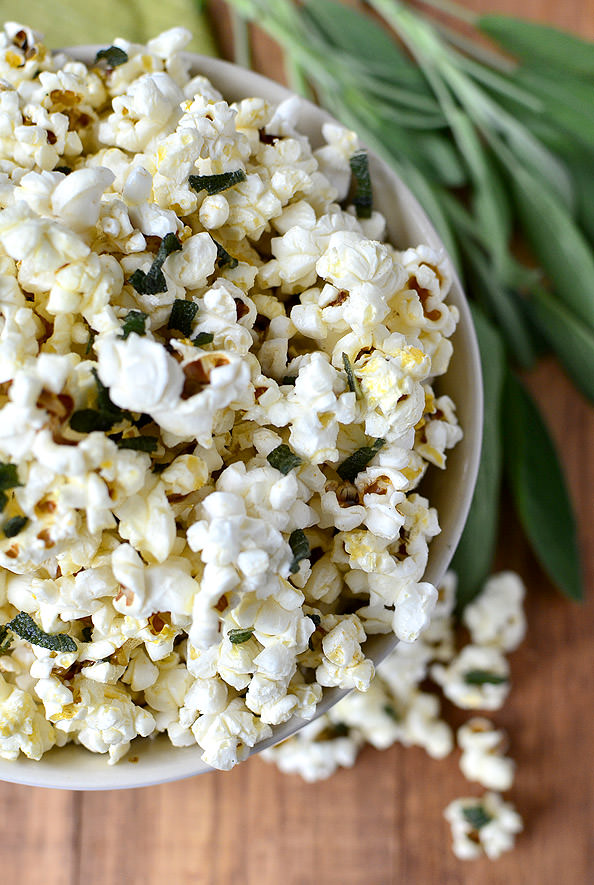 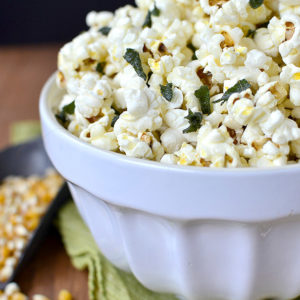 Brown Butter and Crispy Sage Popcorn is addicting on all levels. Plus learn how to make popcorn on the stove! 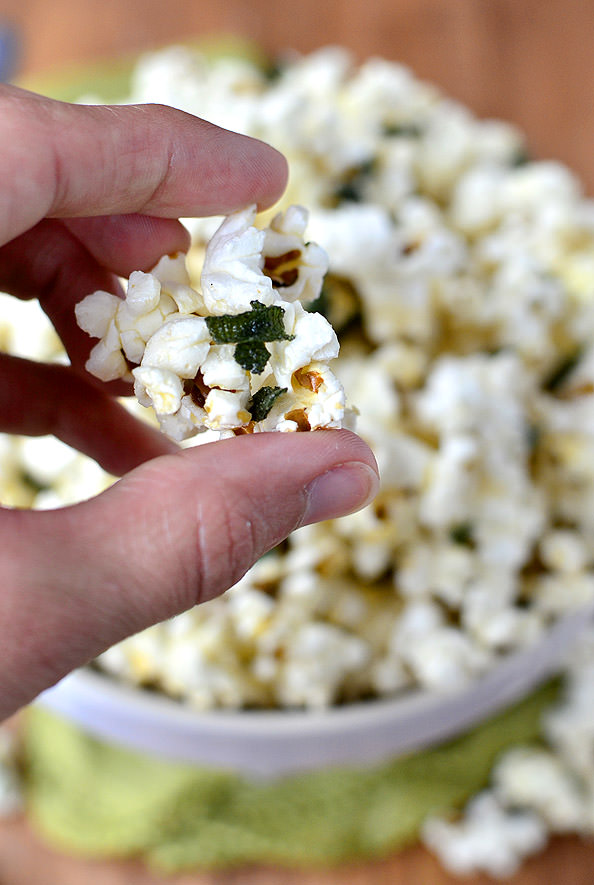