Howdy all! I hope you had a nice weekend and are staying warm wherever you are. It’s a nippy negative five degrees outside as I type this – aka you couldn’t pay me enough money to step outside my door and into the howling wind, which scared the bejeezus out of me a couple nights ago!

Ben and I watched a particularly haunting episode of 48 hours featuring an insane arsonist this weekend, and the creepy wind shaking the house plus a smoke alarm with a low battery that started beeping in our bedroom at 3am left us both wide awake in the wee hours of the morning. Dunh-dunh-dunnnh! Sorry but what are the odds that we watch a show about a guy who sets fire to people’s houses when he’s mad, then our smoke alarm goes off 5 hours later?

And while we’re on the topic, why do smoke alarms always seem to go off in the middle of the night? That was seriously the fifth time in as many years that that’s happened to us. Riddle me that?!

Anyway, control what you can. Since it’s bitterly cold out there right now I made a big pot of perfectly spicy Cheesy Pepper Jack Potato Chowder to warm up with this weekend. 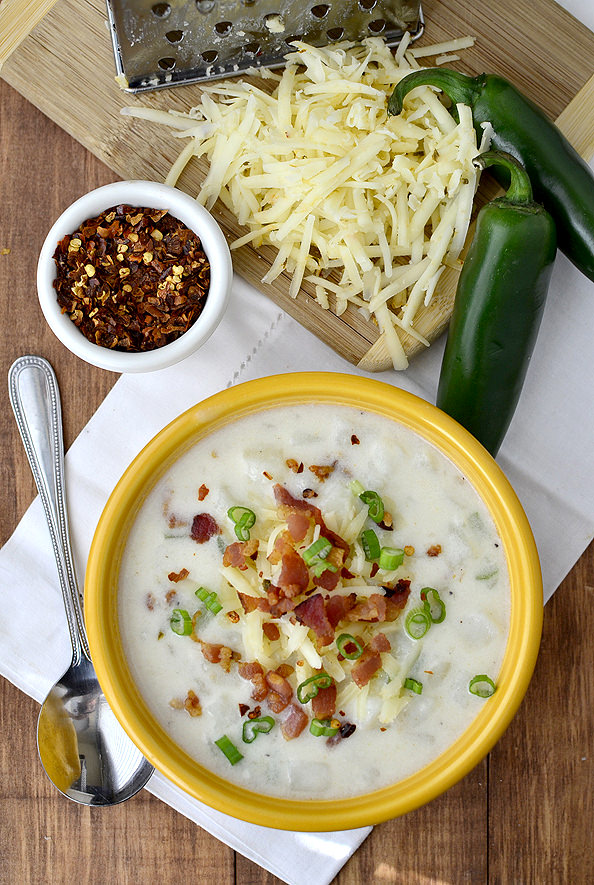 Cheesy Pepper Jack Potato Chowder is thick, creamy, cheesy and just slightly spicy with the addition of both shredded Pepper Jack cheese and red chili pepper flakes in the ingredient list. I am NOT a spice lover – I order a “0” on the spice scale at our favorite Thai place in town – but they provide just the right amount of warmth in this recipe. It’s so, so good. Comforting, cozy, and gluten-free, too! The perfect chowder to ladle up then lay down by the fire with. 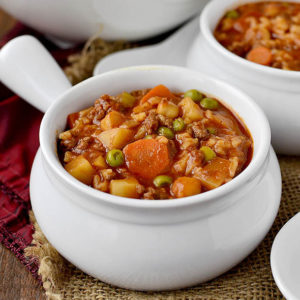 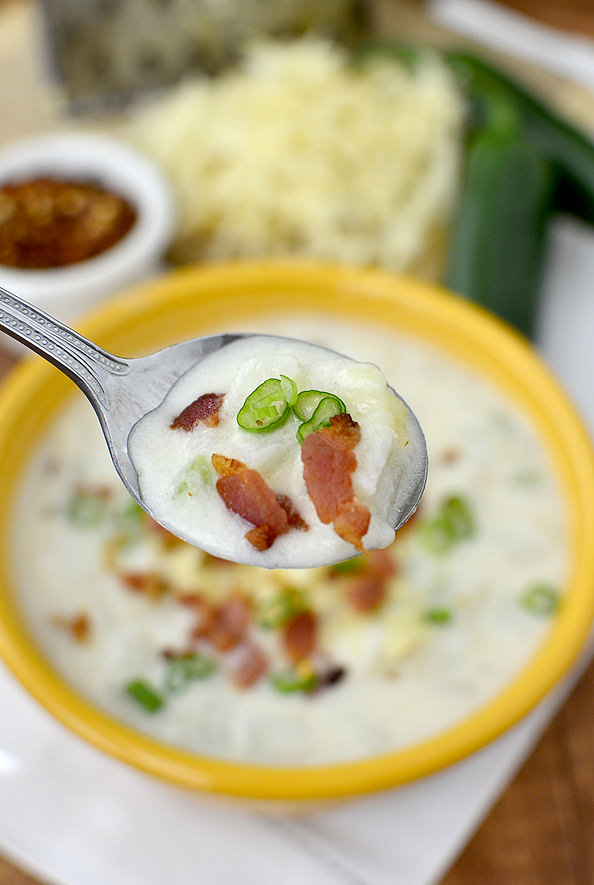 Start with the aforementioned bacon. Crisp 8 slices bacon in a big soup pot over medium heat. Transfer the crisped bacon to a paper towel-lined plate to drain then remove all but 1 Tablespoon bacon grease from the pot.

Remember, the easiest way to discard bacon grease is to spoon it into a foil-lined bowl then throw it away once it cools (or save it, if that’s your jam!) 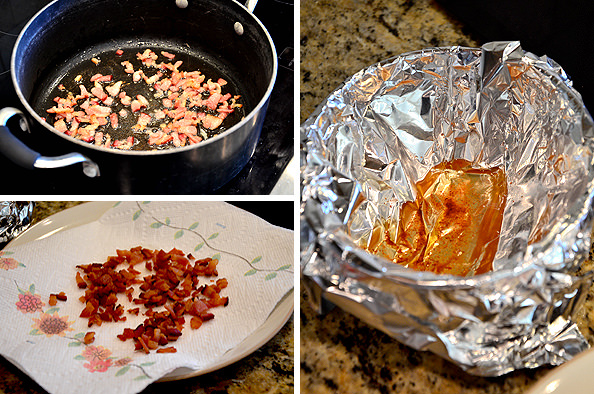 To the bacon grease add 1 chopped celery rib and 1 large chopped shallot. Season with pepper then saute until tender, about 5 minutes. Next add 1/4 teaspoon red chili pepper flakes and 2 cloves minced garlic then saute for 30 more seconds. You can add more or less red chili pepper flakes depending on how spicy you like your food. I found 1/4 teaspoon to be perfect for me. 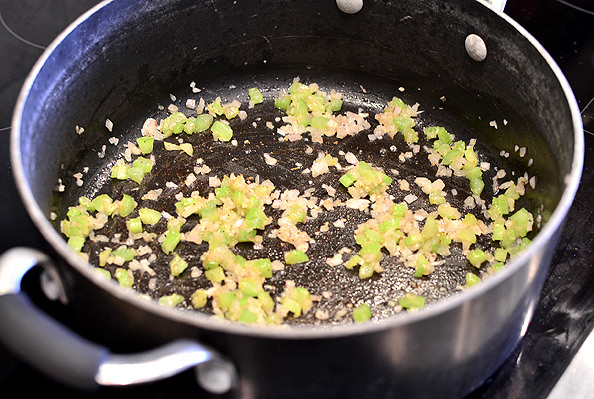 Now add 4 cups Southern Style frozen hash browns. I LOVE using frozen hash browns in this chowder recipe, vs cutting up potatoes myself, because, well, it’s as easy as opening a bag. Plus they cook in no time at all. 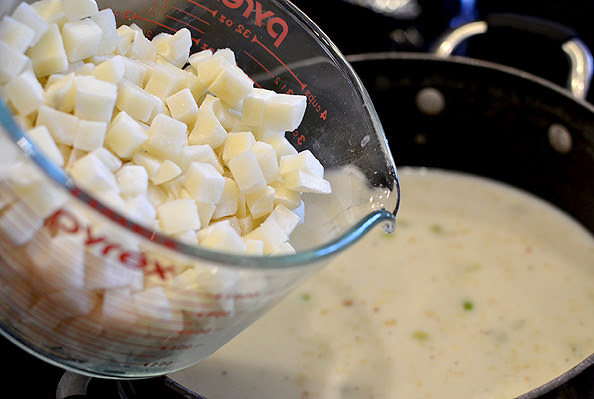 “Southern Style” simply means “cubed” hash browns, btw, and you don’t need to thaw them before adding to the chowder. 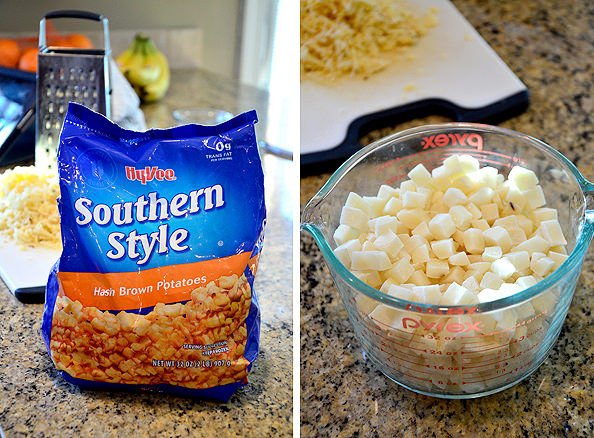 Alrighty, next add TONS of freshly cracked pepper to the chowder then crank the heat to bring it to a boil.

While that’s happening, whisk together 2 Tablespoons gluten-free or all-purpose flour (I like Bob’s Red Mill gluten-free White Rice Flour for thickening soups and sauces) with 1/4 cup chicken broth in a small bowl until smooth. Once the chowder has come to a boil, drizzle the mixture in and give a big stir to combine, then turn the heat down to medium-low and simmer until the chowder has thickened and potatoes are tender, about 5 minutes.

Meanwhile, shred the chowder’s namesake cheese – 8oz Pepper Jack. You can hand shred with a box grater or use a food processor with a grating blade to make things go super quick. I would definitely recommend grating fresh vs buying pre-grated cheese, as pre-grated doesn’t melt quite as smooth.

Once the chowder has thickened and the potatoes are tender, remove the pot from the heat then add the cheese about 1/2 cup at a time, stirring until smooth before adding the next batch. 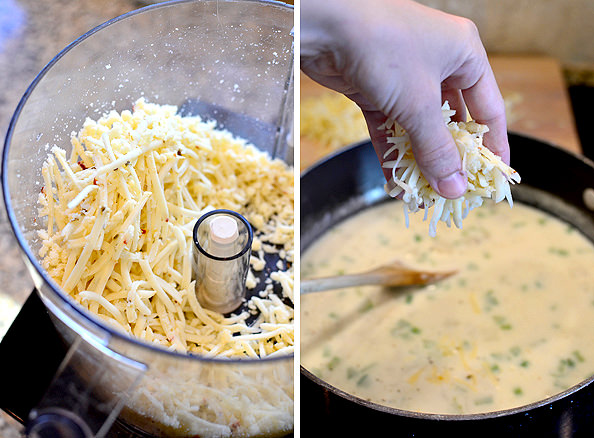 Finally, stir in half the bacon and let the chowder sit and thicken for about 5 minutes. 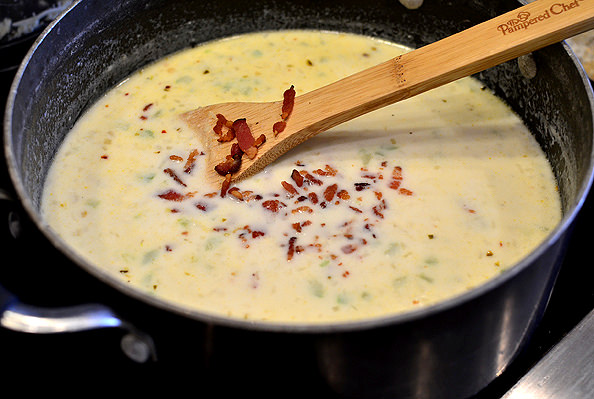 Ladle the chowder into bowls then top with the remaining bacon and sliced fresh green onions. Perfection! 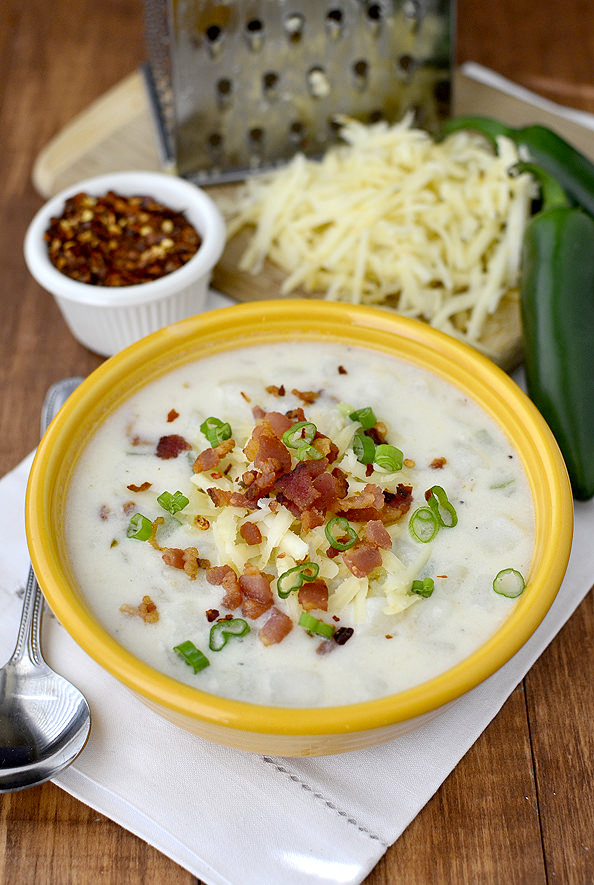 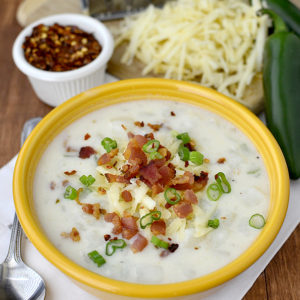 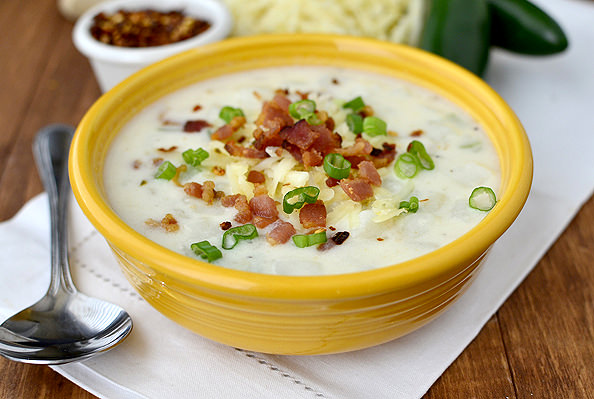 Like I said – total comfort food! I love how luscious this chowder is, with creamy potato cubes bobbing in the warm, cheesy broth. Plus, any chowder that passes the spoon test is a winner in my book. Enjoy! 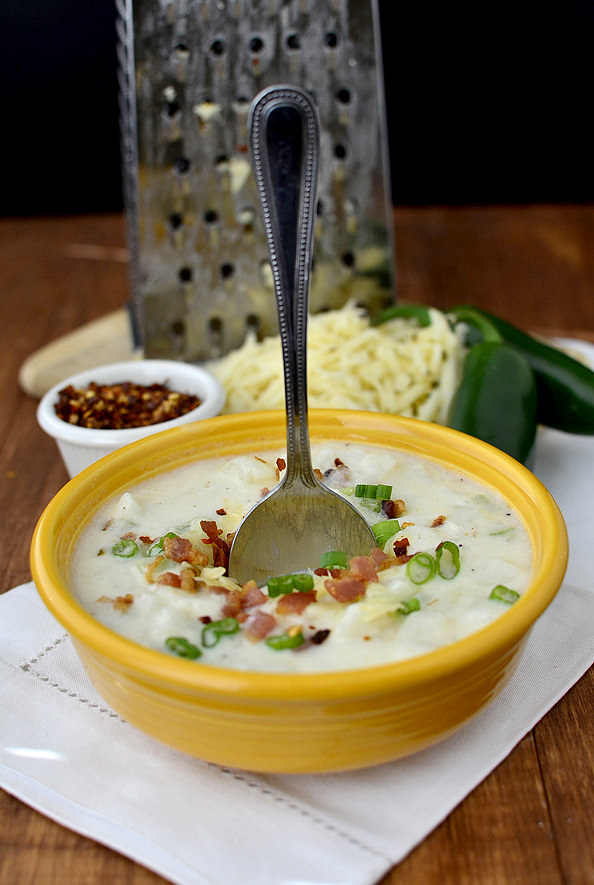