Chicken, Bacon, and Artichoke Pasta with Creamy Garlic Sauce is the pasta version of one of my favorite pizzas. Garlicky and delicious! 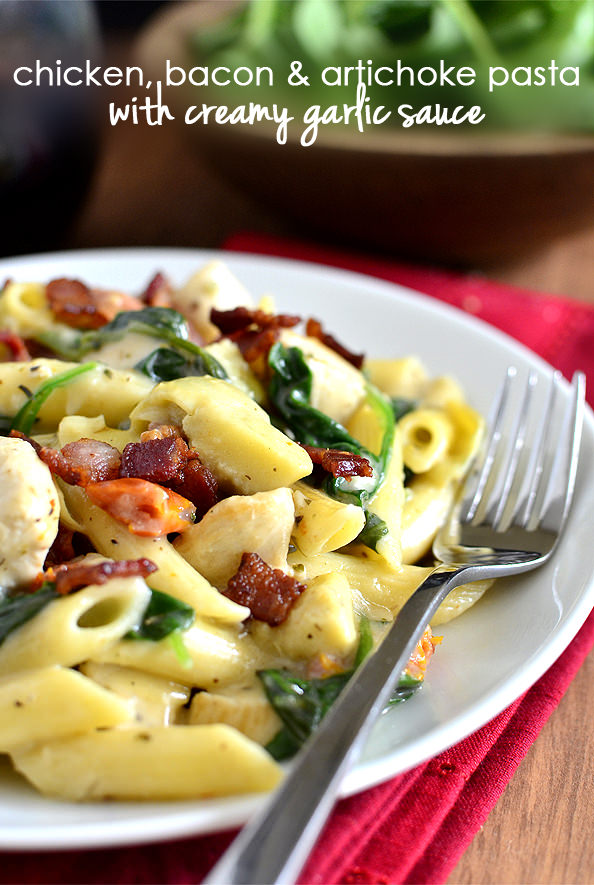 We had a wonderful weekend chock-full of family time. I’m so sad it’s over! Lincoln’s baptism yesterday was absolutely beautiful. He behaved himself so well and even threw the pastor off when he looked up from his hymnal to see Lincoln grinning at the sound of his voice. So proud of my stoic little man! 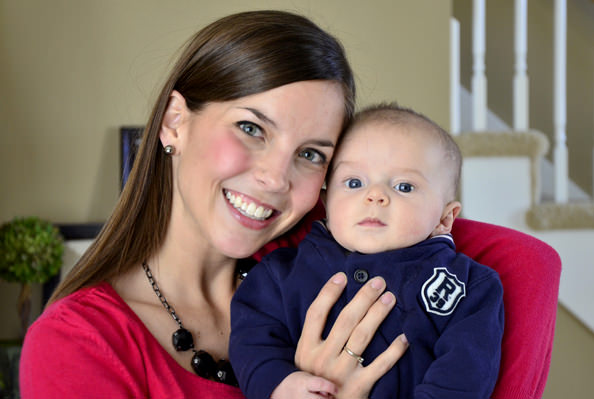 My brother and sister-in-law served as his sponsors, and we couldn’t have been happier to have them up there with us (sorry to cut your head off, bro – shrink a few inches, why don’t ya’!) ; ) 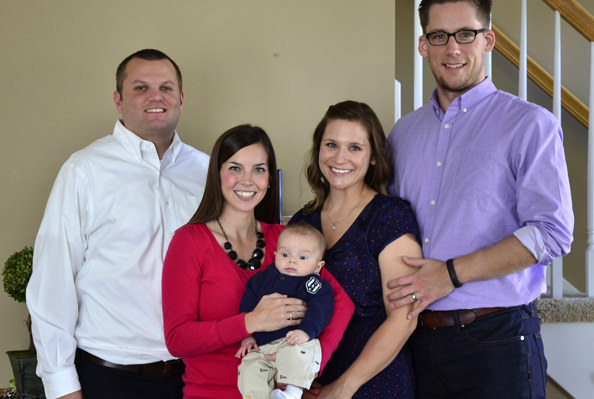 After the service we had a big brunch for Ben’s and my family. It was a full house, and a fun preview of family gatherings and holidays to come. Before we moved into our new place I was kind of a hosting grinch – there just wasn’t enough room to have more than a few people over. Now we can all spread out and run around. It is so much better! 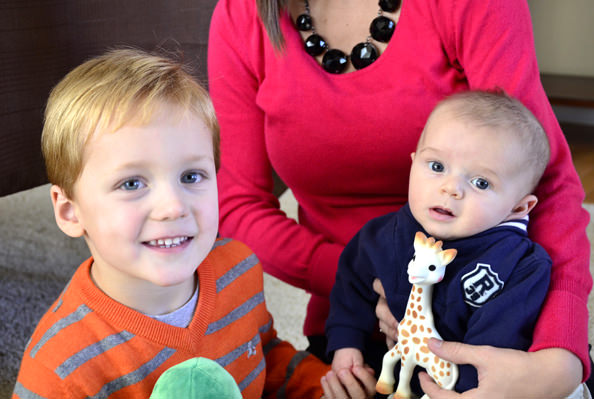 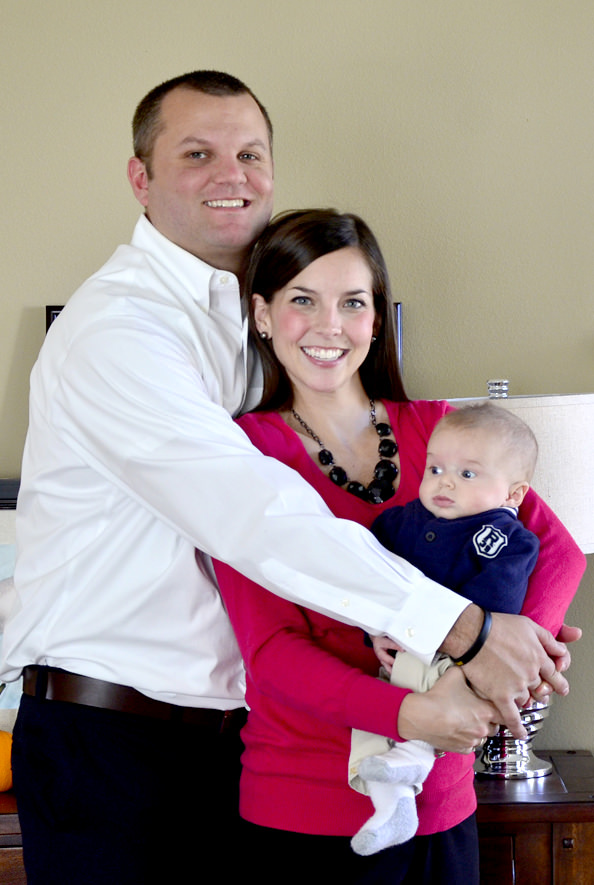 My in-laws and Ben’s brothers stayed with us this weekend to celebrate Lincoln’s big day, so Saturday afternoon I whipped up a huge pot of Chicken, Bacon, and Artichoke Pasta with Creamy Garlic Sauce for lunch. 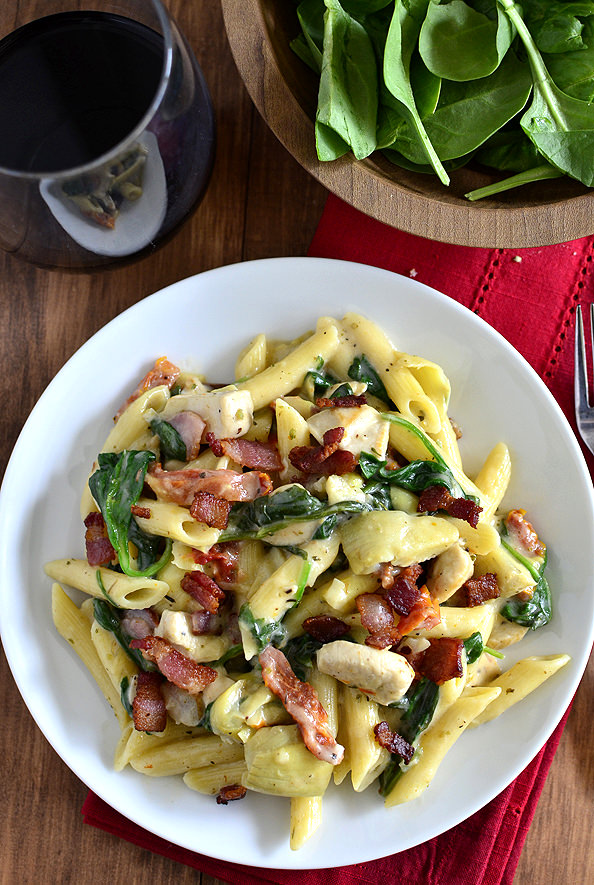 This dish is the pasta version of one of my favorite pizzas with the same name from Papa Murphy’s (take ‘n’ bake, baby!) and it feeds a crowd. Chicken, bacon, artichoke hearts, sun-dried tomatoes, and spinach are tossed with chewy pasta then smothered in a luscious creamy garlic and herb sauce. I’d say the taste is nearly identical!! 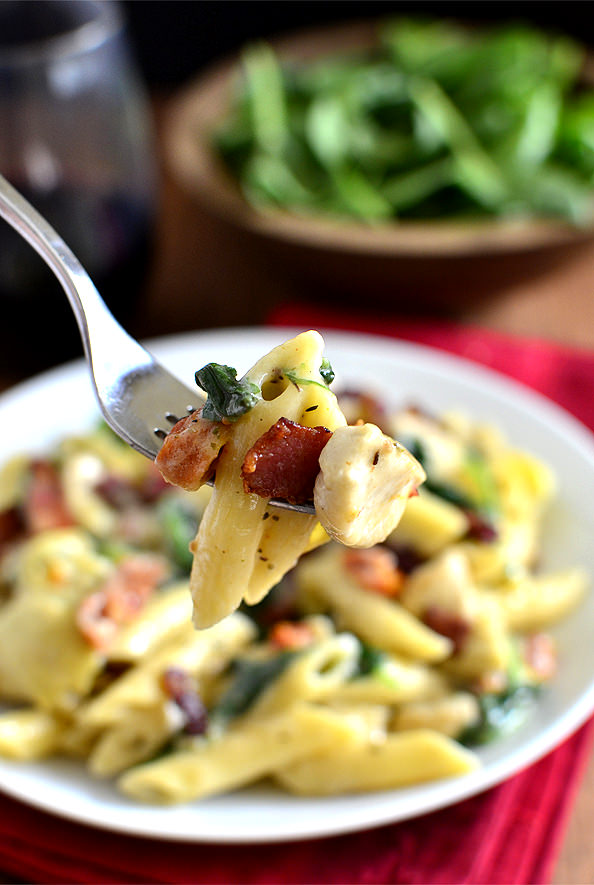 Start by cooking 12oz penne pasta in salted boiling water until al dente, then drain and set aside. Easy. 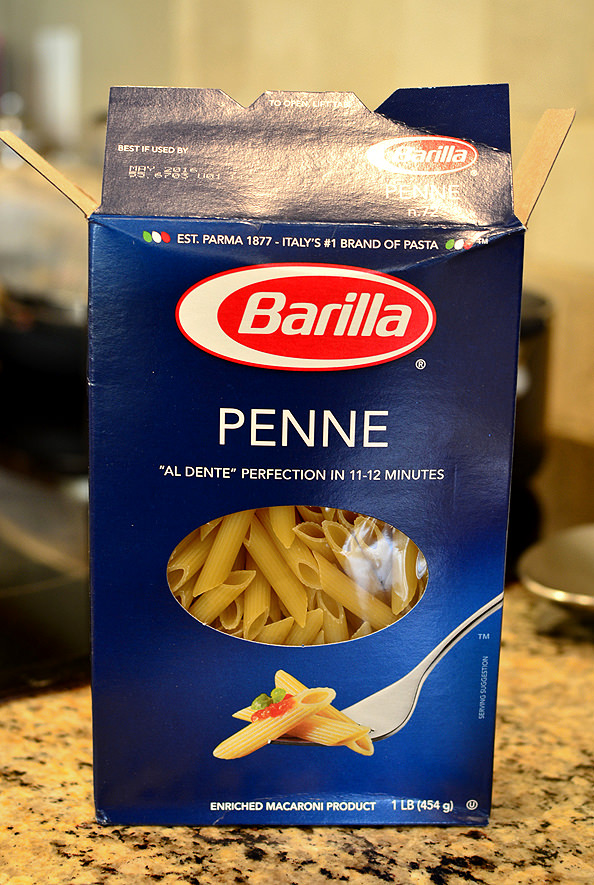 Next, cook 1/4lb chopped bacon (4 slices, y’all) in a large skillet over medium heat until crisp, then remove to a paper towel-lined plate to drain. Remove all but 1 teaspoon bacon grease from the skillet. Don’t forget to use my easy bacon grease disposal trick! 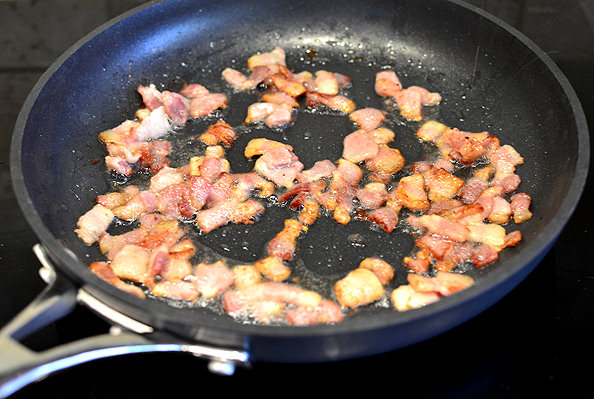 Add 1lb chopped chicken breasts to the skillet, season with salt and pepper, then cook until no longer pink. Then add 1 can quartered artichoke hearts that have been drained and chopped up, and 1/4 cup julienned sun-dried tomatoes. Cook until the artichokes are heated through, 3-4 minutes.

Finally add 5oz fresh spinach (about half a bag of DOLE spinach) then toss with tongs until wilted, 1-2 minutes. 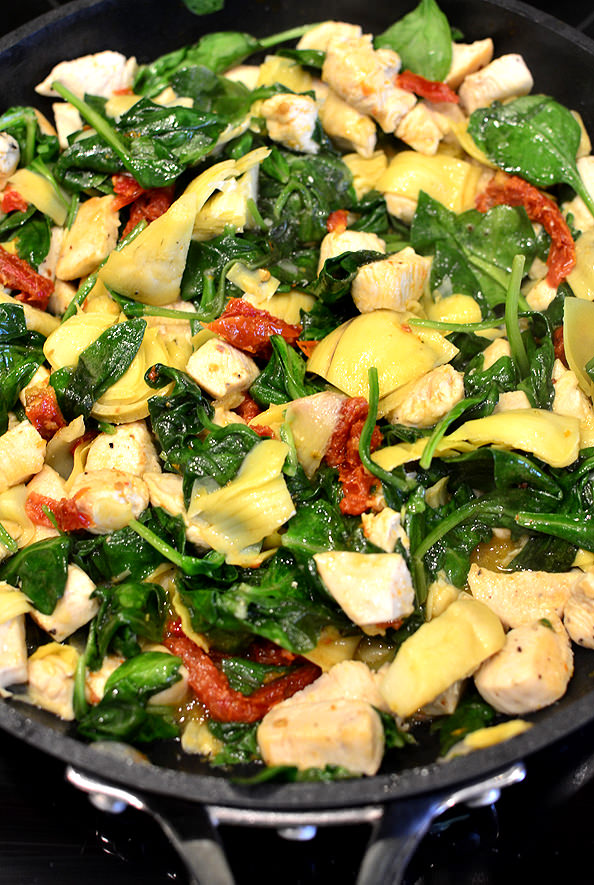 K! Now, you can cook the chicken/artichoke mixture first then make the creamy garlic sauce second, or if you’re confident enough, you can do them both at the same time. You can do it!

In a skillet or saucepan, melt 2 Tablespoons butter in 2 Tablespoons extra virgin olive oil over medium heat, then add 4 cloves minced garlic and saute for 30 seconds. This may seem like a lot of fat, but remember, this recipe makes a TON of food. 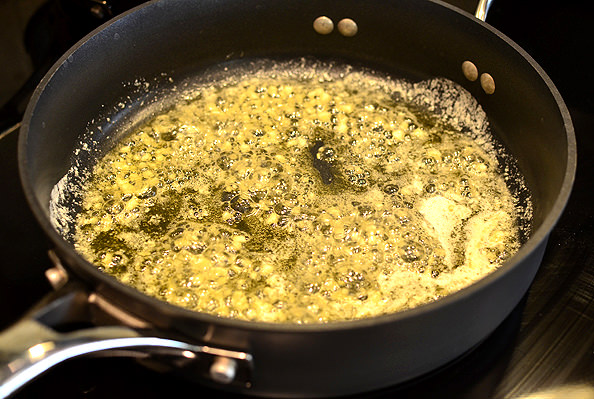 Next sprinkle in 1/4 cup flour and whisk until smooth, then slowly stream in 1-1/2 cups each milk and chicken broth while whisking constantly to avoid lumps. I used 2% milk, but you could use whatever you’ve got in the fridge.

Season the sauce with salt and pepper then switch to a wooden spoon and stir frequently until thick and bubbly, about 10 minutes. 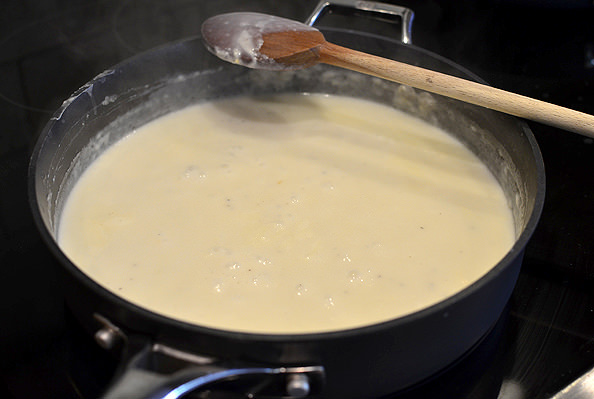 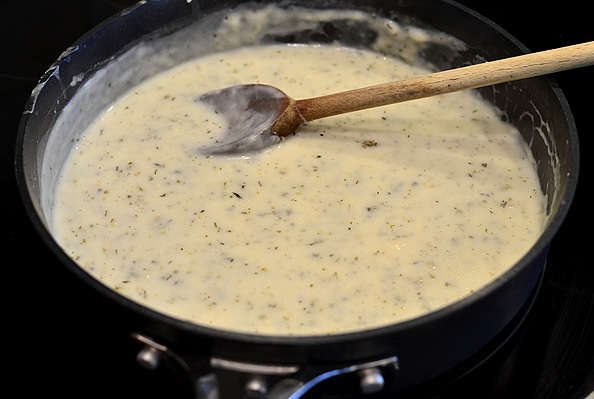 Everybody into the pool! That is to say, combine the cooked pasta with chicken and artichoke mixture, the garlic cream sauce, and cooked bacon (mmm, bacon.) 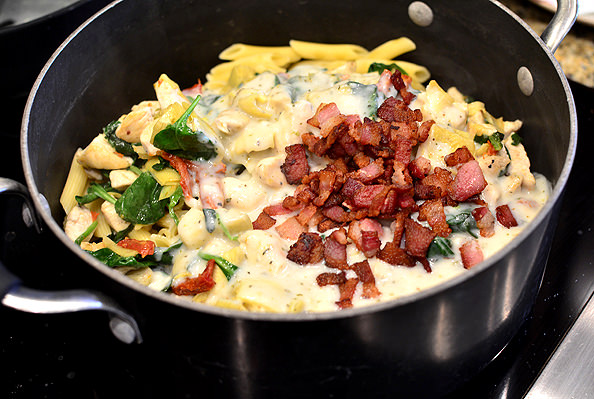 Toss to combine, then scoop & serve! 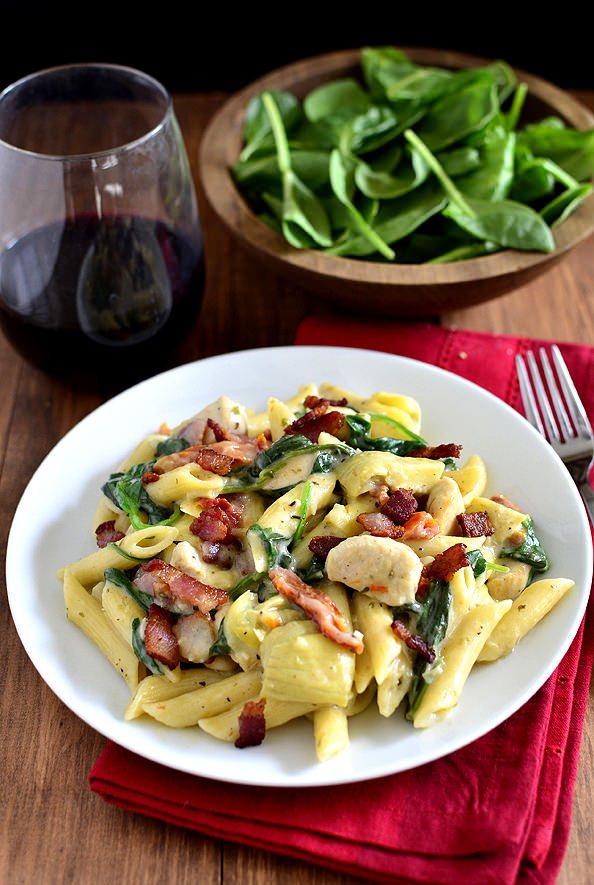 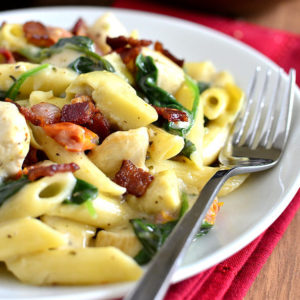 Chicken, Bacon, and Artichoke Pasta with Creamy Garlic Sauce is the pasta version of one of my favorite pizzas. Garlicky and delicious!

So many mouthwatering flavors in this dish – where do I even begin? Well, bacon, first of all. But those pops of sweet from sun-dried tomato, and garlicky punch from the sauce are just Heaven. Hope you love this pasta, and have a great week! 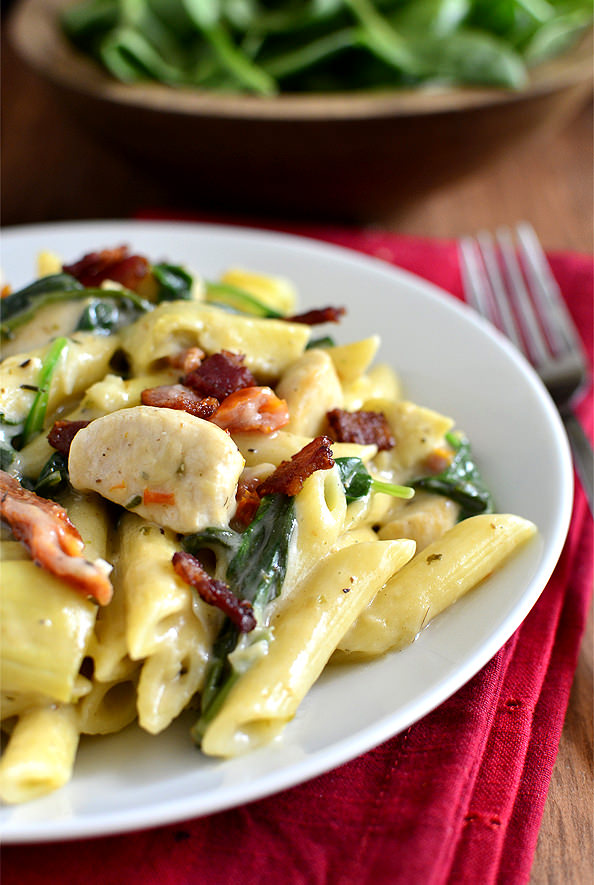