Chicken Cordon Bleu Mac and Cheese is a hearty dinner recipe, but surprisingly light, with no butter nor cream! 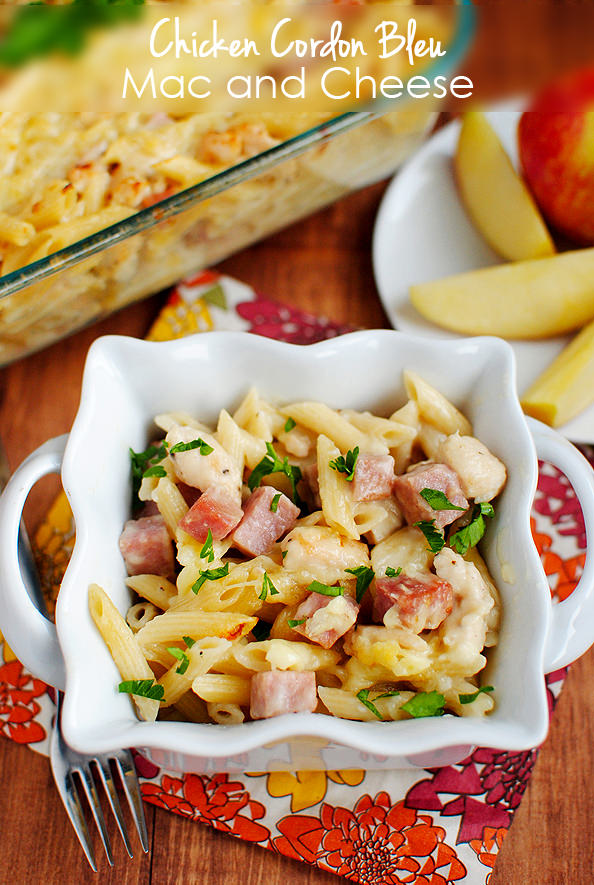 Don’t put your stretchy pants away from Thanksgiving just yet – there’s still Chicken Cordon Bleu Mac and Cheese to be had!

Ok, to be fair, this mac and cheese recipe is actually VERY light when compared to other mac and cheese recipes. It’s made with NO butter, SKIM milk, lean chicken breast, diced ham, and a modest amount of quality-shredded cheese to mimic the classic flavors of a Chicken Cordon Bleu rollup.

Which I’ve actually never made because it just looks way too complicated. And homey don’t play that. 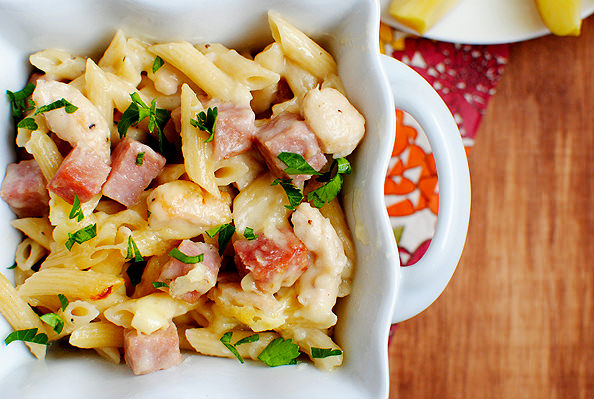 I know I just linked you guys off to a mac and cheese recipe the other day but, like I said, the hamster wheel inside my brain keeps spinning all mac and cheese, all the time, and I could not wait another second to try this deconstructed Chicken Cordon Bleu Mac and Cheese! 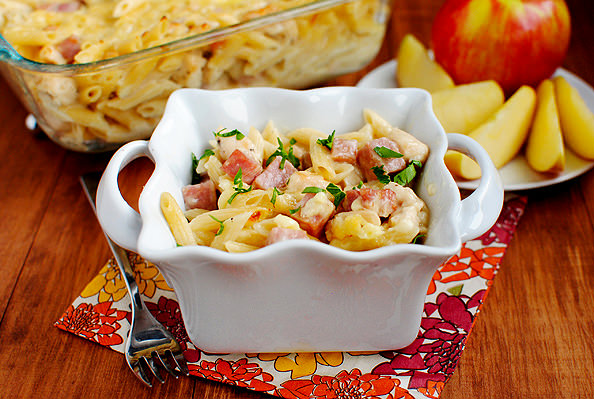 Instead of pounding out chicken breasts, layering them with ham and cheese, then rolling up, and cooking, I sauteed a chicken breast with regular deli ham, then combined it with cooked pasta, and an easy cheese sauce. It’s silky, creamy, salty, and mouthwatering. I know you’ll love it! 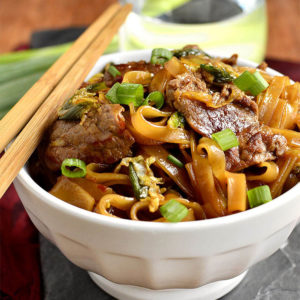 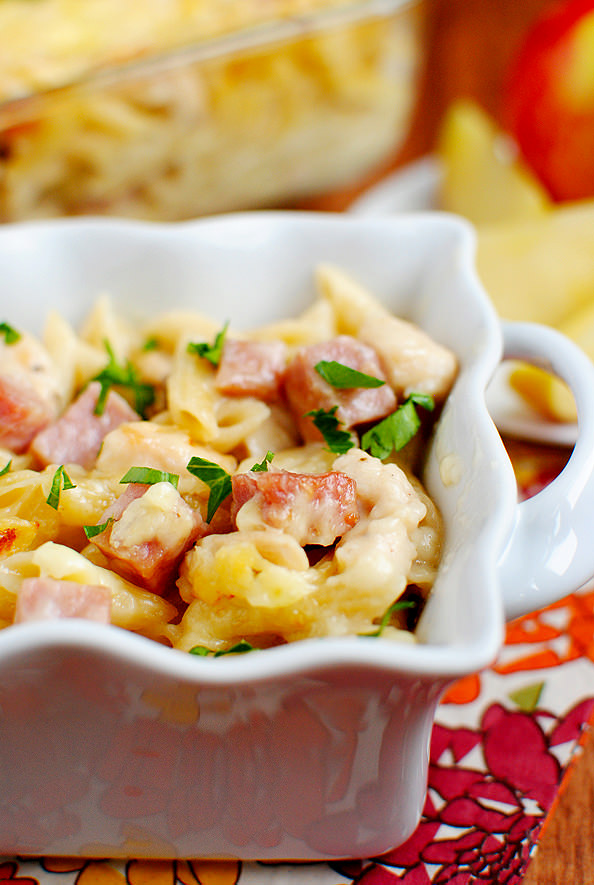 Start the Chicken Cordon Bleu Mac and Cheese with zee cheese! 4oz each Gruyere and Swiss cheese. I don’t usually love Swiss cheese, as it’s a little too strong for me, so the cheese guy at Whole Foods recommended this Prairie Rose Swiss, which is not only really mild, but melts well too. Loved it!

Shred the cheese by any means possible – box grater, hand grater, food processor etc. – then set it aside for a sec. 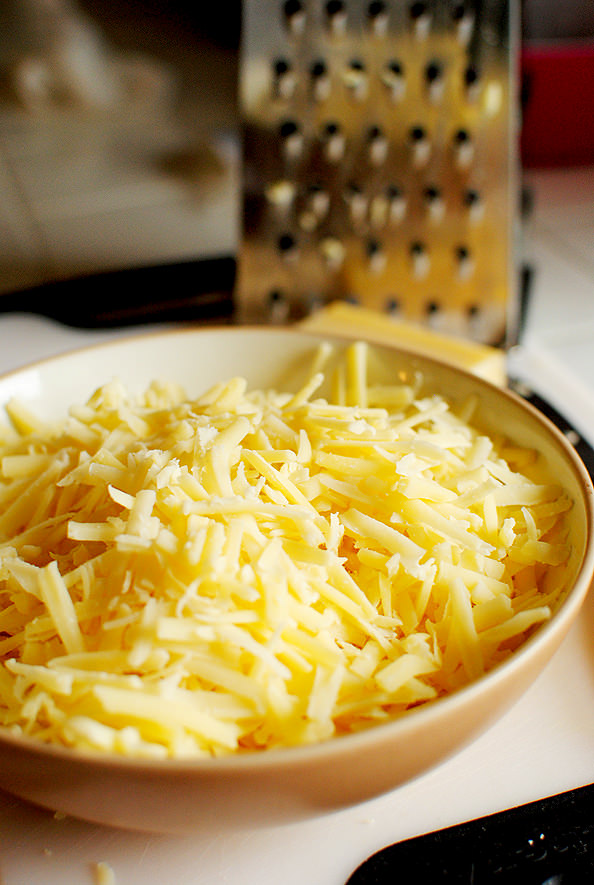 Next saute 1 large chicken breast cut into small pieces then seasoned with salt and pepper in a skillet over medium-high heat. I used non-stick spray vs adding any extra oil, which worked like a charm. 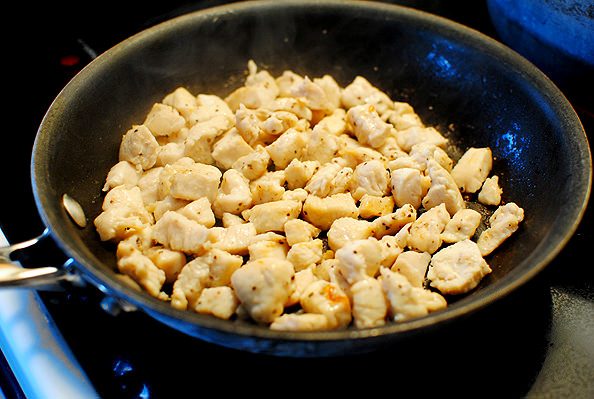 When the chicken is cooked through, add 1/2lb smoked deli ham sliced 1/2″ thick, then cut into small cubes. I had the woman working at the deli counter at the store cut it into “ham-steak” thickness, then cubed it at home. 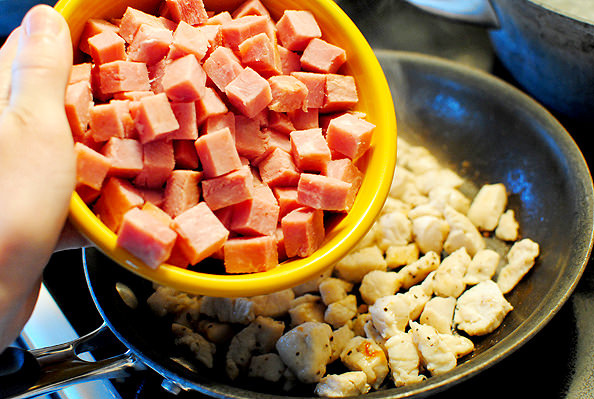 Since the ham is already cooked you just need to warm it up for a minute or two. Once it’s hot, place some foil on top of the skillet then set it aside. 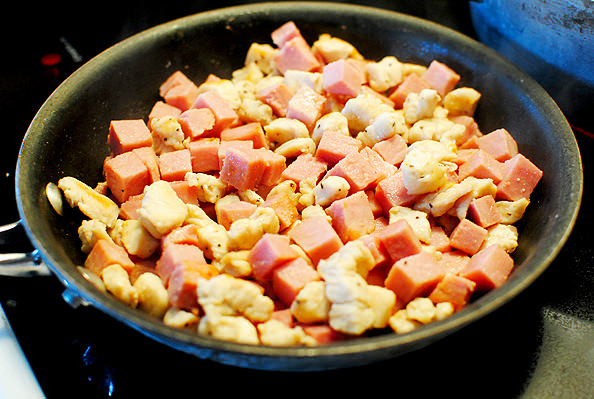 Next drop 10oz short cut pasta into a big pot of salted, boiling water. You can use whatever you’ve got on hand – penne, rotini, macaroni, etc. I used mini penne ’cause that’s all I had 10oz of, plus they’re so dang cute! 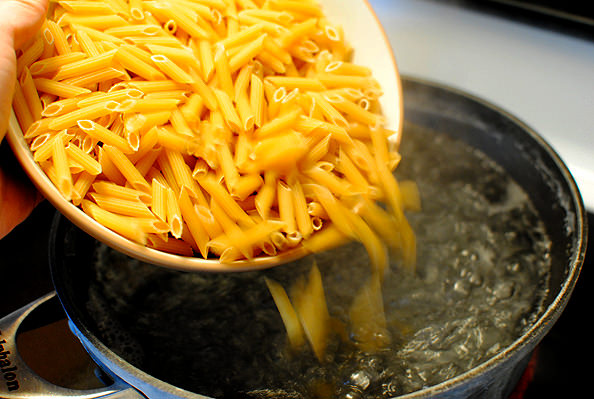 While the pasta is cooking, get to work on the cheese sauce. Stir together 1/2 cup milk with 2 Tablespoons flour in a small dish then add it to a large skillet over medium heat. Slowly drizzle in 1/2 cup more milk plus 1 cup chicken broth while whisking constantly then season the sauce with salt and pepper and stir for 10 minutes, or until thick and bubbly.

Also, yes, that is definitely an electric beater attachment whisk. My regular one was in the dishwasher! 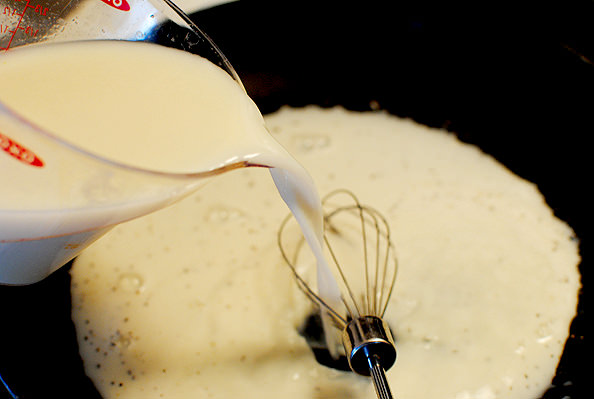 To complete the cheese sauce, take the skillet off the heat then add 3/4 of the shredded cheese and stir until smooth. 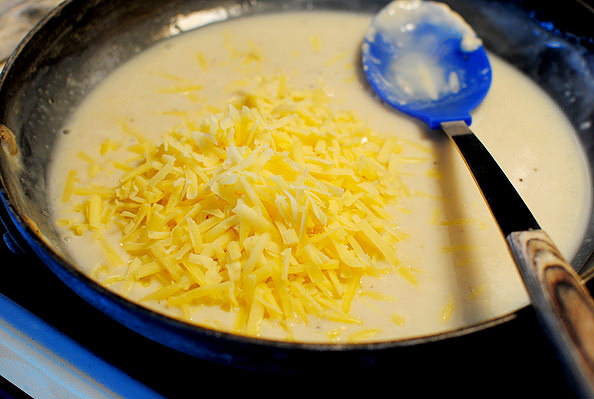 Stir in the cooked pasta, chicken, and ham next…

Then transfer the whole mixture into a nonstick sprayed baking dish, top with the remaining cheese, and broil ’til golden brown and bubbly. 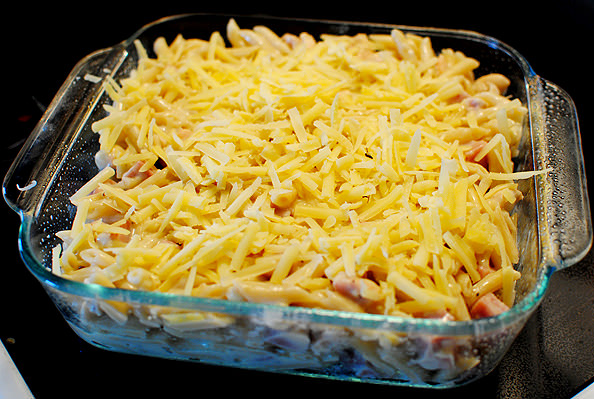 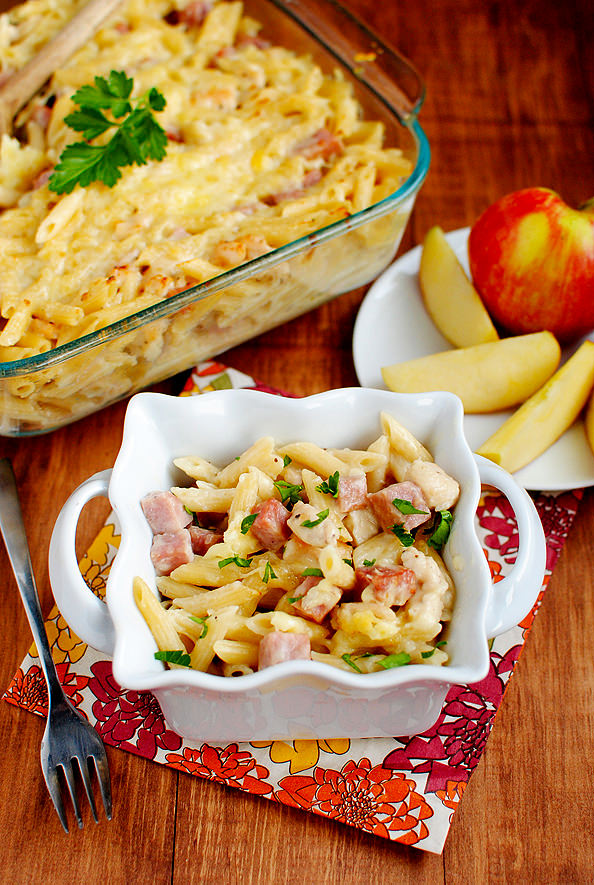 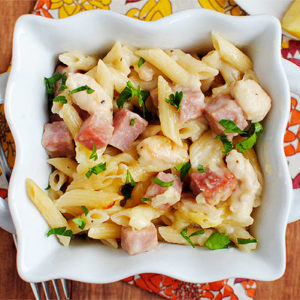 Chicken Cordon Bleu Mac and Cheese is hearty, but surprisingly light, with no butter or cream! 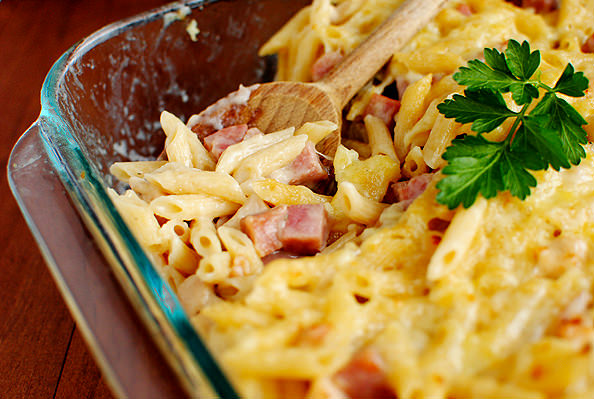 I could totally taste the Swiss cheese in here, but the more mild Gruyere mellowed everything out. The combo of the two was perfectly light and creamy. I did not feel bad at all about eating a heaping scoop of this mac! 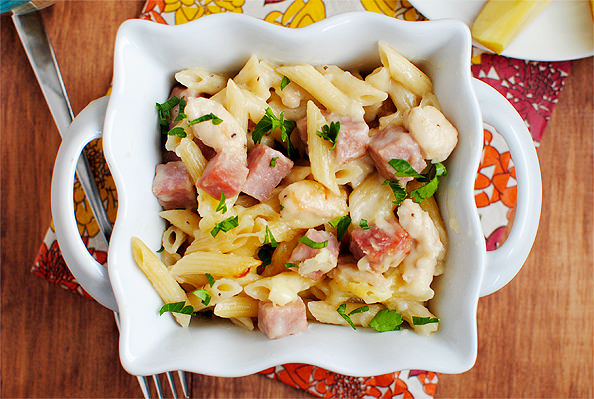 That smoked ham had me drooling too (sorry for the visual) and I made sure to get a few cubes in each cheesy bite. Sensational! Ben called it bomb as hell. 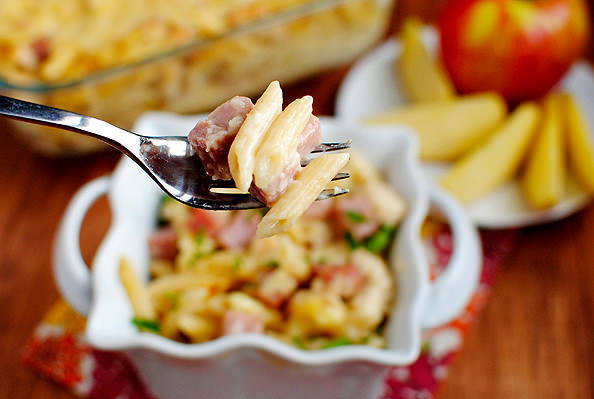