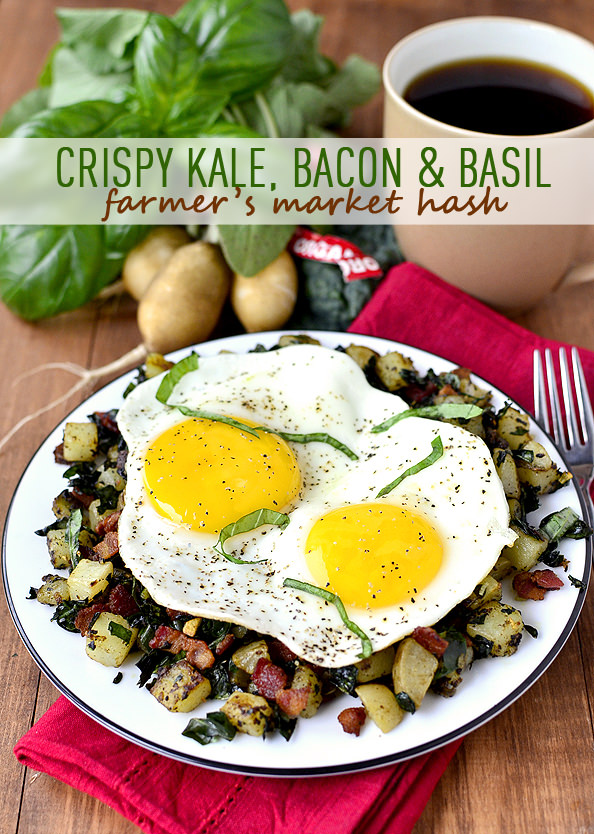 Happy Monday, all! How was your weekend? Ben was out of town but despite the fact I was flying solo I got so much done around the house. I’m still slightly giddy about it. I got more accomplished in the three hours after Lincoln went to sleep on Friday night, and during a three hour trip to Camp Grammy and Papa’s on Saturday afternoon, than I have in over a year between being pregnant and having a baby!

Rooms scrubbed, cupboards organized, pictures hung, donations bagged, outgrown baby toys broken down and stored… Ok, broken down and laying in a pile in the basement to deal with at a later date. All that hard work left me feeling like I’d been run over by a truck by Saturday evening. Nothing a Sweet Tea Vodka Lemonade Mojito couldn’t fix! I made a refreshing and relaxing round for my parents and myself while cheering on California Chrome during the Belmont Stakes. What a bummer loss!!!

Earlier that morning my Mom, Lincoln and I took a quick spin around the Farmer’s Market to stock up on fresh veggies for the week. I got a pile of kale and radishes from one of my favorite vendors then plucked some fresh herbs from my garden to make Crispy Kale, Bacon and Basil Farmer’s Market Hash for lunch later that day! 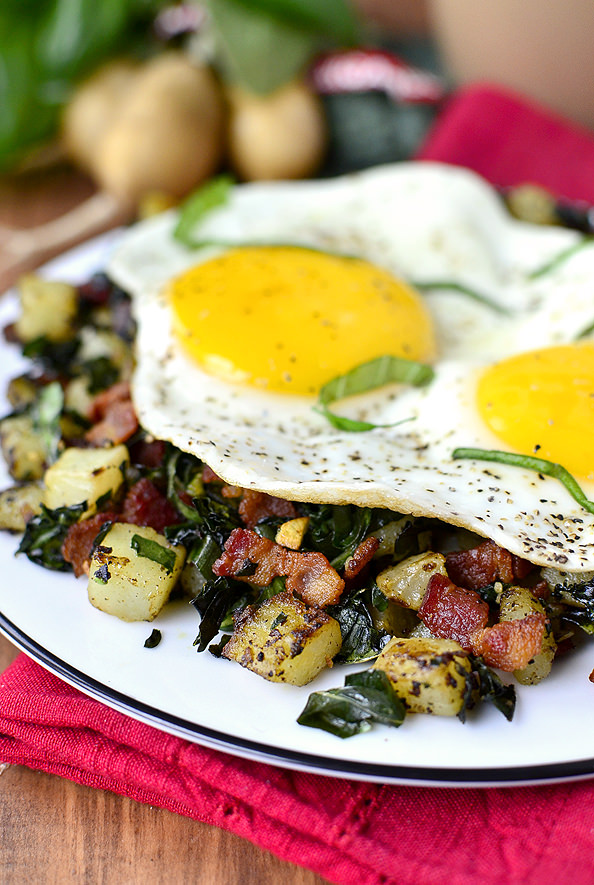 Anyway, like I said, his homemade hash and my trip to the Farmer’s Market was the inspiration for this summer-produce heavy dish which includes chopped potatoes sauteed in a big skillet with chopped radishes, shallots, garlic, kale, bacon, basil and lots of salt and pepper. Topped with sunny-side up eggs, I inhaled my plate.

The potatoes and radishes saute until deep golden brown while the kale cooks down until it’s crisp. Literally you can hear it snap and crackle as it cooks. Totally addicting. I’ve been really missing bread to sop up my runny eggs since having to go gluten-free, and this hash is the perfect bed to let the yolks run down into.

Fabulous to make on the weekends or any day of the week, for any meal, and for heaven’s sake, to use up all those fresh Farmer’s Market finds! 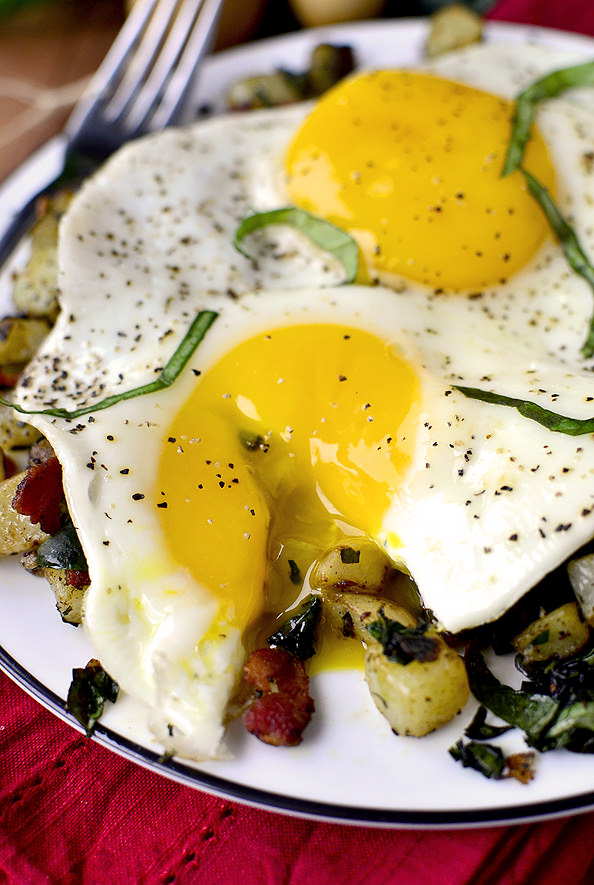 Start with your Farmer’s Market (or grocery store) goodies, including a bunch of golden radishes (could use red,) and lacinato kale which is a flat-leaf type of kale. If you can only find curly kale that’s fine too. 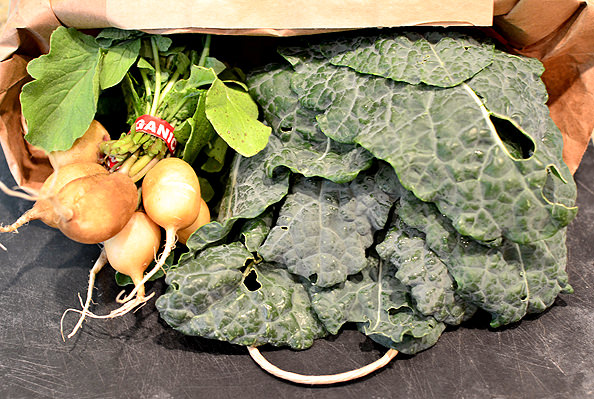 Trim the roots and leaves off 8 small radishes then chop ’em up into roughly 1/2″ chunks. Fresh radishes are spicy (almost too spicy for me,) but sauteing them with the rest of the hash ingredients mellows them out. That being said, they still give the dish an awesome bite. 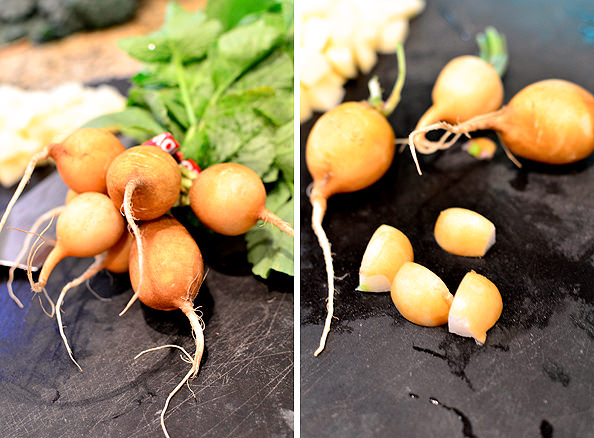 Add the radishes to 1 large russet potato that’s been peeled then chopped into 1/2″ chunks, as well as 1 large shallot or 1/2 small onion that’s been chopped. Time to get cooking! 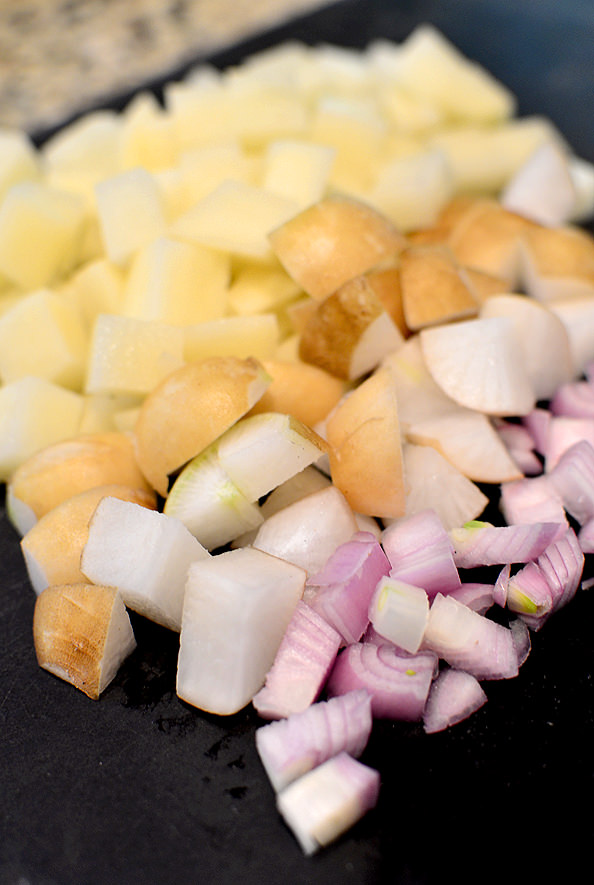 Saute 3 pieces chopped bacon in a very large skillet over medium heat. Cook until the bacon is crisp then remove to a paper towel-lined plate to drain, and remove the bacon grease (or not! Instructions ahead…)  I made this once without the bacon and it was still delicious but, as they say, everything’s better with bacon! 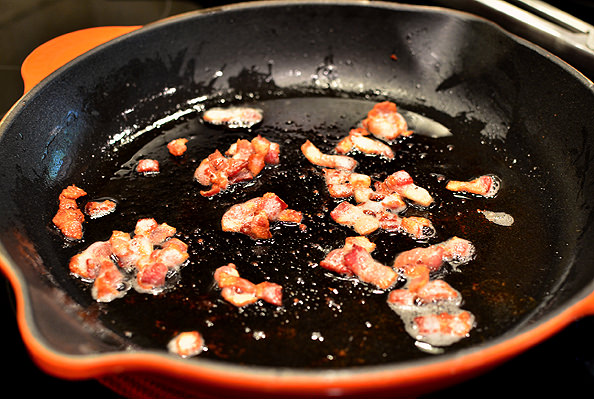 Next heat 3 Tablespoons extra virgin olive oil to the skillet, or add enough oil to the bacon grease to equal 3 Tablespoons fat, then add the chopped potatoes, radishes, and shallot. Season with salt and pepper then arrange the veggies in one layer and allow the bottoms to crisp up for 3-4 minutes undisturbed. 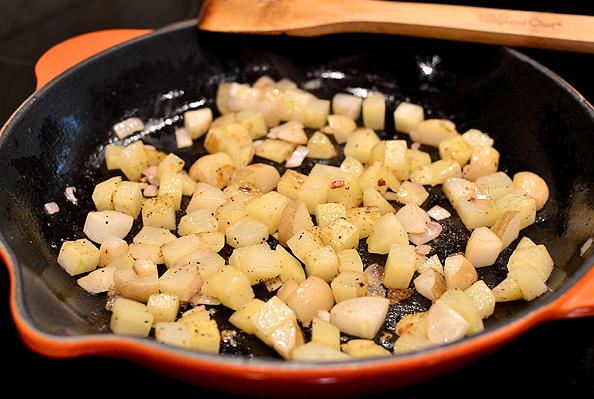 While the root veggies are browning, wash then dry 1/2 big bunch lacinato kale. You’ll need 4 cups chopped kale total. The easiest way I’ve found to wash big leafy greens is to rinse then place them on a clean kitchen towel, roll it up, and then pat. Viola!

Peel the leaves off the stem then chop ’em up.

Once the root veggies have begun to turn golden brown, turn the heat up to medium-high then add the kale and season with more salt and pepper. Continue to saute, stirring every so often, until the potatoes are browned and tender, and the kale is crisp, 8-10 minutes. You’ll start to hear the kale snap and crackle near the end – that’s the sound of crispy kale in the making! 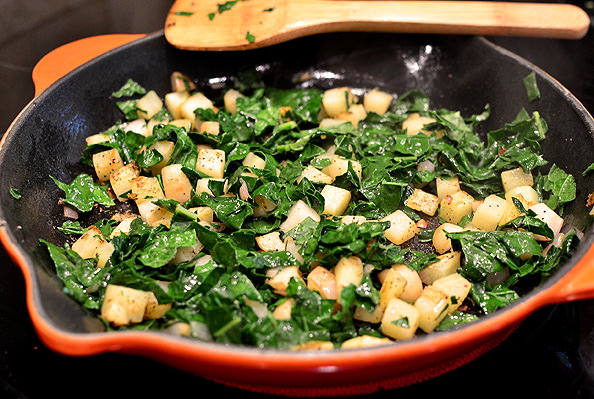 Finally get your fresh basil ready. This is one of my favorite parts of the hash as it provides a fresh burst of summer flavor. YUM! Obviously you could pick up a big bunch at the Farmer’s Market but I actually plucked this from my herb garden! 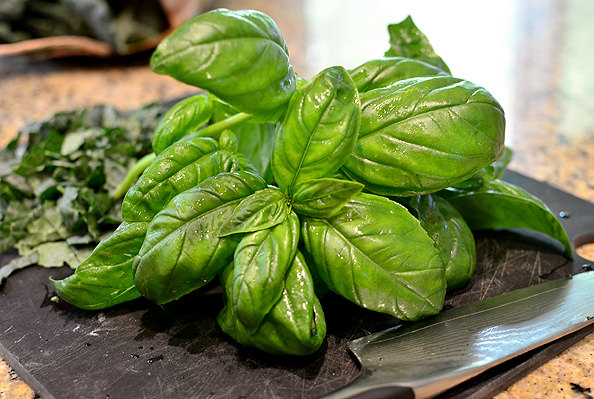 Stack 6-8 large basil leaves on top of one another then roll into a cigar shape and zip through it with a knife.

Add the basil along with 4 cloves minced garlic to the skillet then saute while stirring for 1 minute. Stir the cooked bacon back in then remove the skillet from the heat. 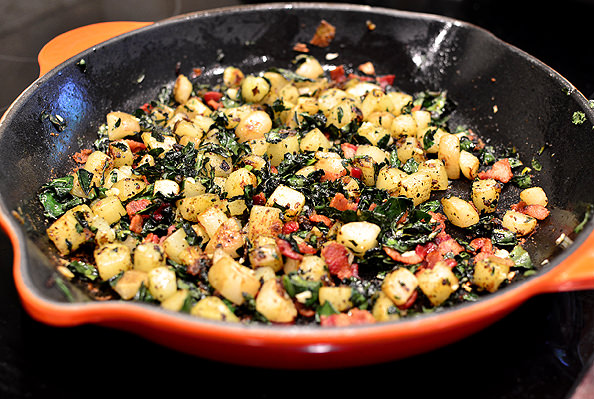 Meanwhile, in a nonstick skillet over medium heat next door, crack in 2 eggs then season the tops with salt and pepper. Cook until the bottoms are set then place a lid on top and cook until the whites are set on top but the yolks are still runny, 3-4 minutes. 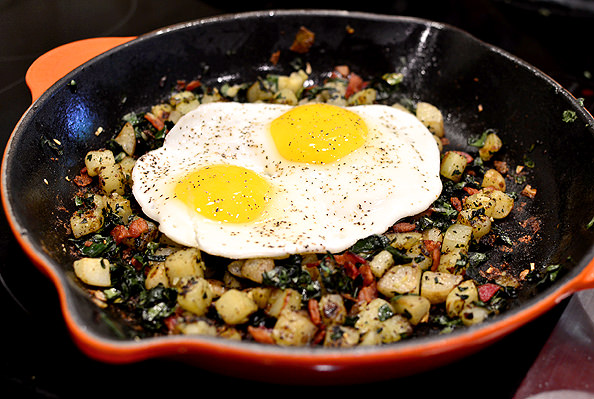 Or scoop the Crispy Kale, Bacon and Basil Farmer’s Market Hash onto plates and top with eggs. Either way – dig in! 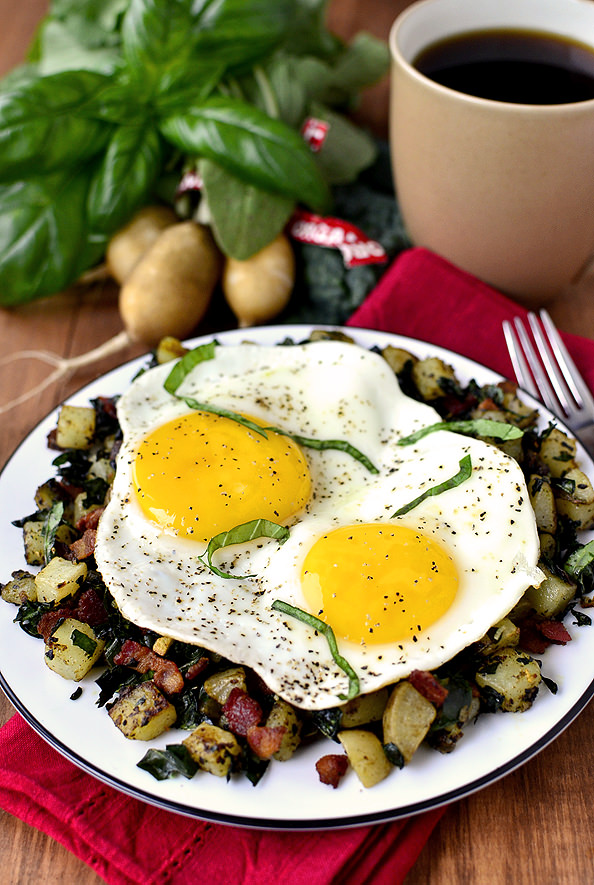 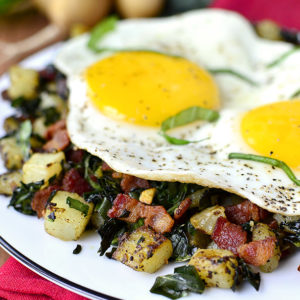 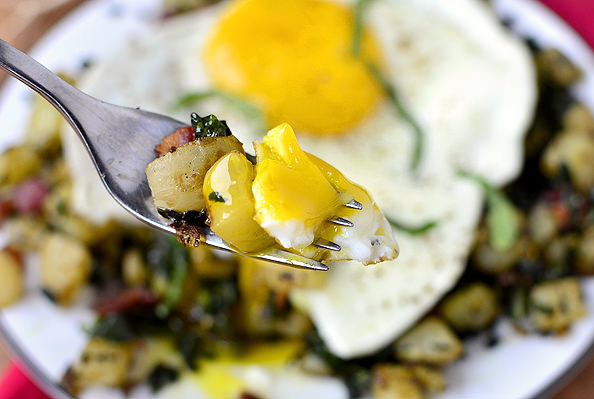 Bacon, kale, potatoes, eggs, and radishes. It doesn’t get much better than that! Enjoy! 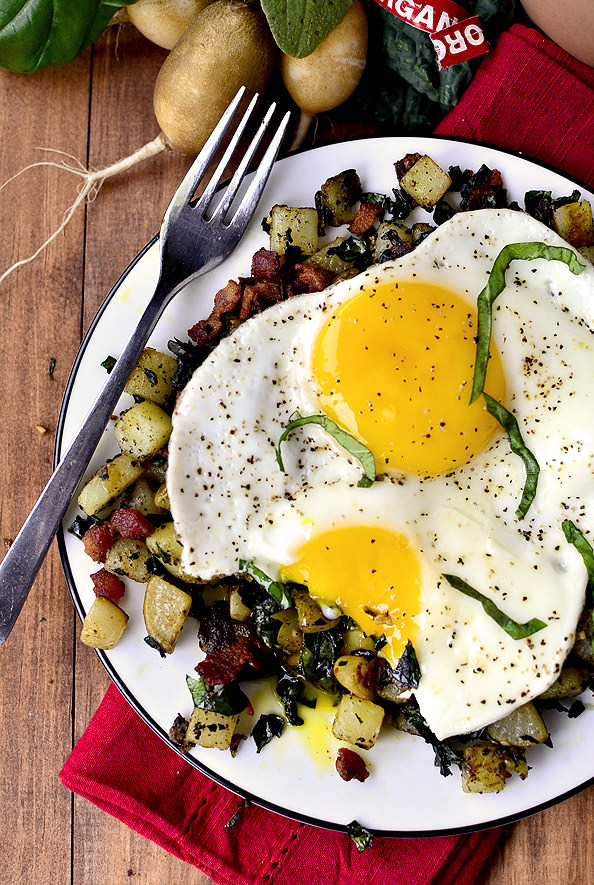