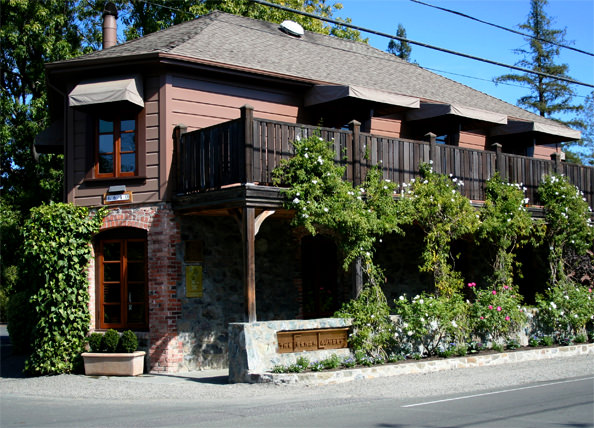 The French Laundry in Yountville, CA (pronounced yawnt-ville) is one of the most famous restaurants in northern California (it was actually named “Best Restaurant in the World” in 2003 and 2004 by Restaurant Magazine!) Located in a blink and you’ll miss it historic building from the early 1900’s, TFL is owned by chef Thomas Keller, and is described as a uniquely American restaurant whose inspiration lies in the countryside of France.

For $270 you can order one of their nine-course tasting menus that changes daily, where not a single ingredient is used twice. With dishes like Hen Egg Gnudi, Confit Fillet of Atlantic Halibut, Sweet Butter-Poached Main Lobster “Mitts” and Salmon Creek Farms Pork Belly “En Feuille De Brick”, I’d totally pay the price – at least once!

We passed the restaurant yesterday on our way to wine tasting, as well as its gardens, located just across the street. It’s totally unassuming, which I hear is how the place feels inside too – not hoity toity at all. What a treat it would be to someday get a reservation here!