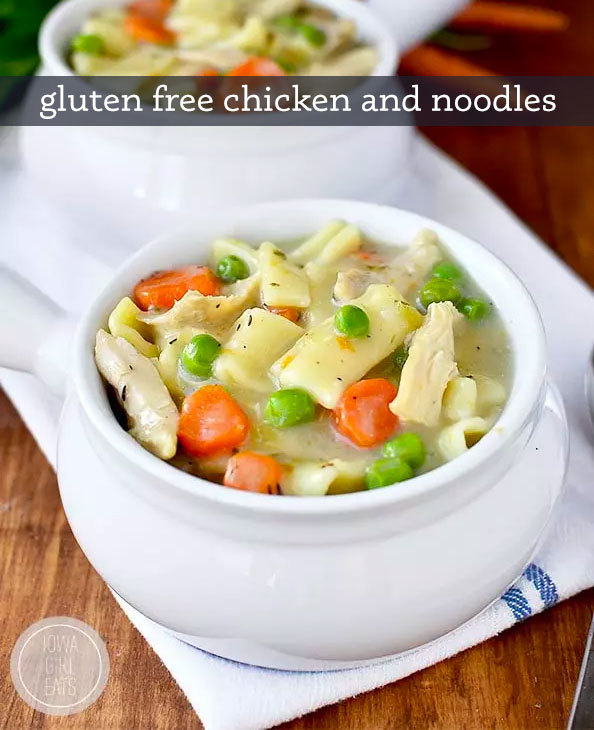 Since going gluten free over a year ago I’ve come to terms with the fact that there are certain things I can’t eat anymore, and that’s (usually!) fine. These days, replacements can be found for traditional pizza and potstickers – my favorite gluten-filled foods – though there’s been more than one occasion when I’ve wandered down the frozen foods aisle gazing wistfully at the fat frozen egg noodles I used to toss into homemade chicken and noodles, wishing I could go back in time for just a little while.

Thick, chewy, and classically comforting, frozen egg noodles plump into near dumplings when dropped into hot, steamy broth and are seriously just, THE BEST. But they’re also made with all-purpose flour…until now! 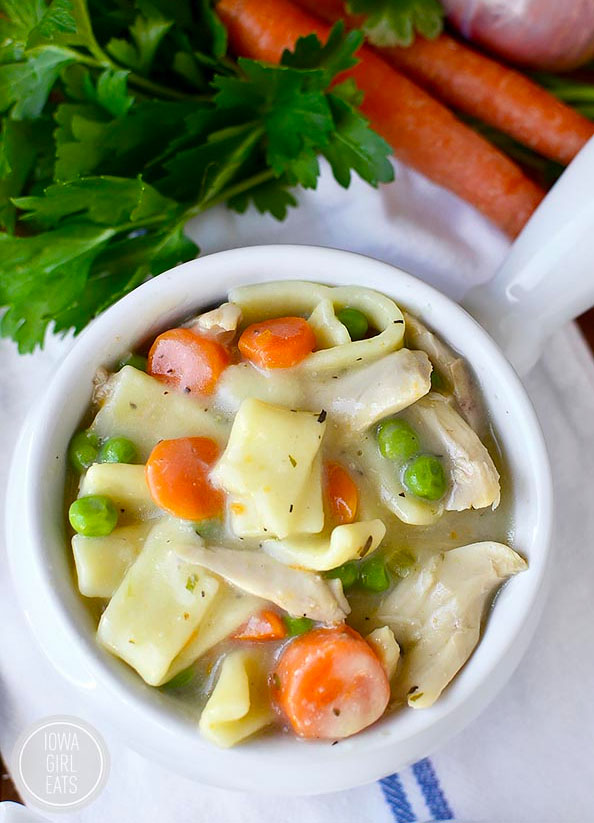 To be enjoyed on the coldest of winter days, Gluten Free Homestyle Chicken and Noodles is bone-in chicken simmered in broth and aromatics like carrot, celery, and dried herbs for maximum flavor in a short amount of time. While the chicken is simmering, homemade gluten free egg noodles are mixed, rolled, and cut, then sprinkled into the hot broth and cooked until plump and tender. Finished with a flourish of frozen peas, and a drizzle of milk, this hearty, bubbly dish will be a winner with anyone – gluten free or not! 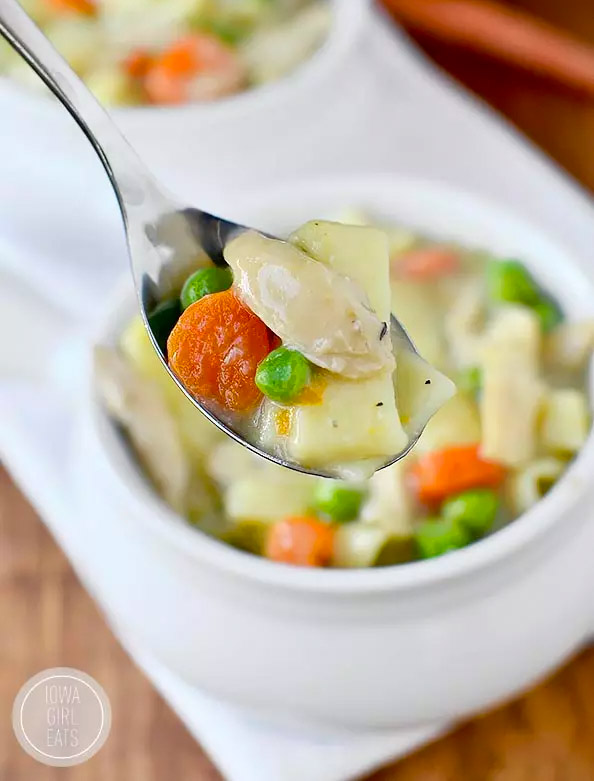 How to Make This Dish

Start by adding 2 bone-in chicken legs plus 2 chicken wings to the bottom of a large Dutch Oven or soup pot. Chicken legs are the thigh and drumstick which I cut off a whole chicken. First I removed all the skin from the chicken (except from the wings – those suckers are too small!) then sliced off the legs and wings. I don’t do this often, but it’s such an economical way to eat chicken. I got a whole bird for $7.99 vs the 1lb package of chicken breasts I usually buy for $5.49! 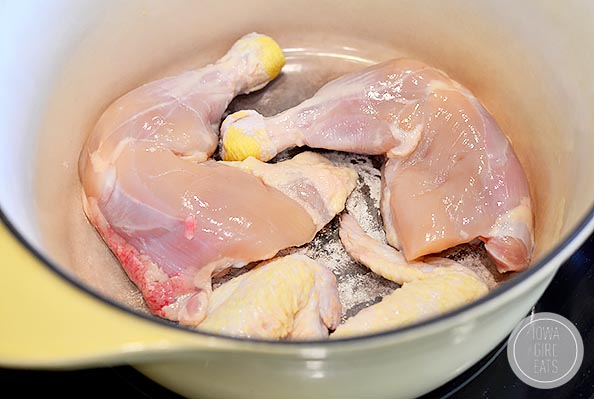 Next add 6 cups chicken broth. We’ll be adding aromatics like carrots, shallots, and celery to the pot next, which you usually add to a whole chicken and water to make chicken stock. But, since we’re only simmering for 30 minutes, vs a couple hours, I like using broth instead of water to get tons of flavor really fast. 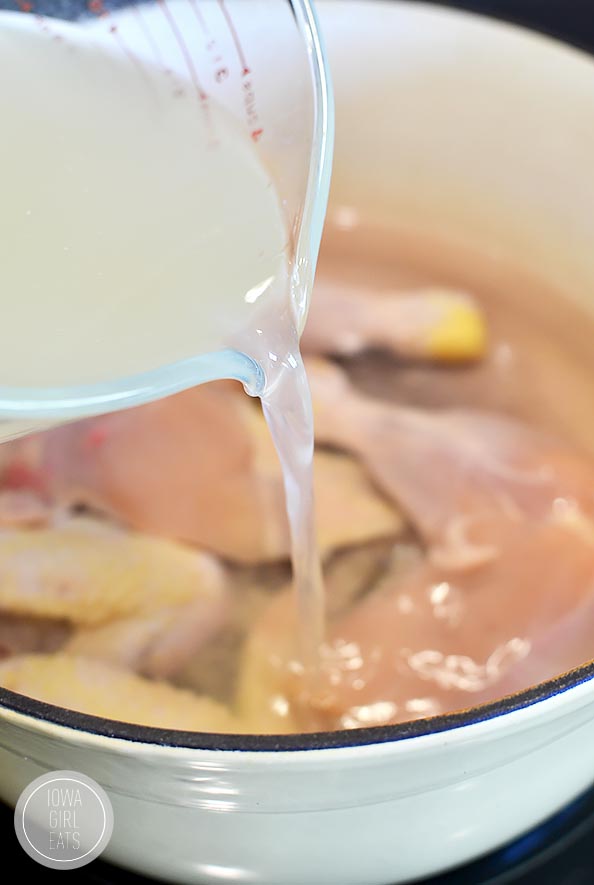 Next add those aforementioned aromatics: 1 cup each carrots and celery, 1 chopped shallot or onion, plus 1/2 teaspoon each dried thyme and dried parsley, 2 bay leaves, 2 cloves minced garlic, salt, and pepper. 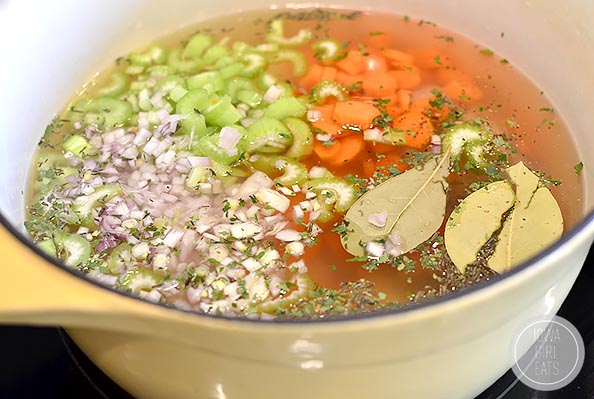 Bring the broth to a boil then place a lid on top, turn the heat down, and then simmer until the chicken is fall apart tender, 30 minutes. Remove the chicken to a plate then shred when cool enough to handle and set aside. By the way, don’t be scared to use dark meat in this dish. It really adds so much flavor! 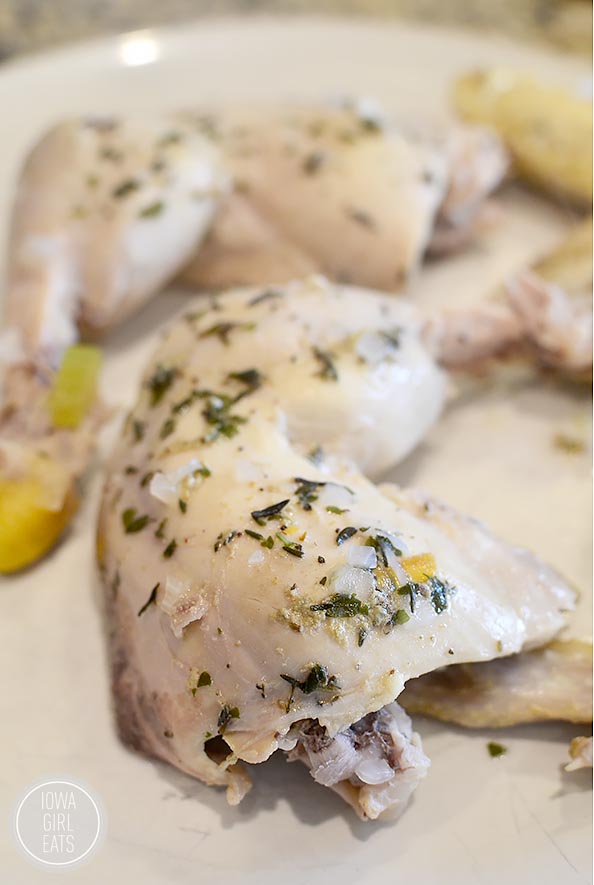 Meanwhile make the gluten free egg noodles. I am telling you – you’re going to flip for these chewy noodles which are a dead ringer for their gluten-filled frozen counterparts!

Start by whisking together 3 whole large eggs plus 1 extra egg yolk with 1 teaspoon salt and 1 Tablespoon water in a small bowl. 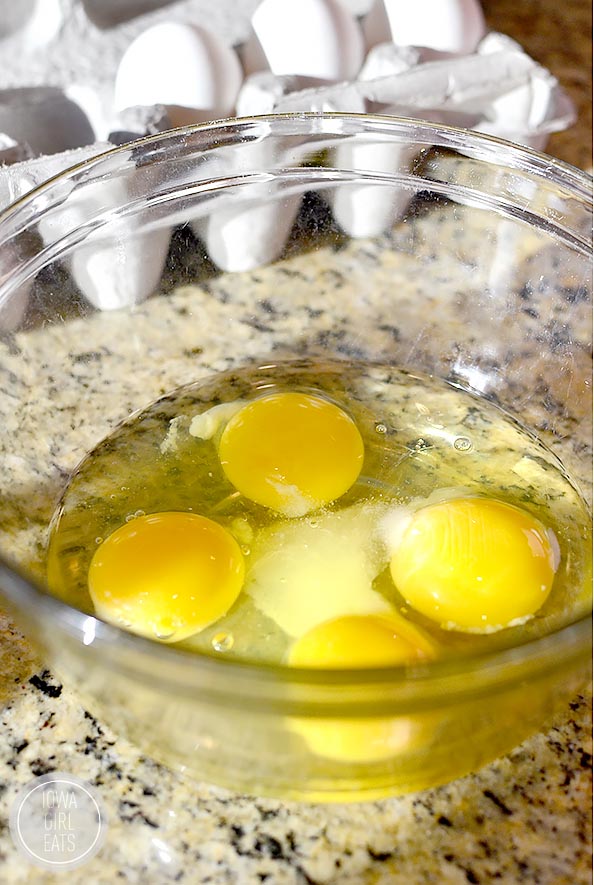 Add 2 cups gluten-free flour blend with xanthan gum to a large bowl then make a well in the center and pour in the egg mixture. Using a fork, whisk while gradually adding flour from the outside until a stiff dough has formed.

As I mentioned, Lincoln loved this dish and even got in on the noodle-making action! Until he swatted the bowl and got flour everywhere. Game over. 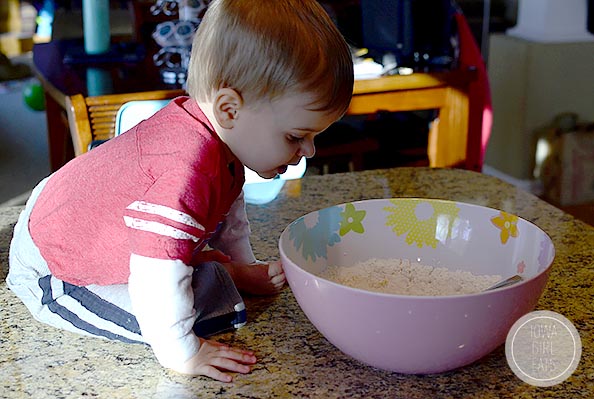 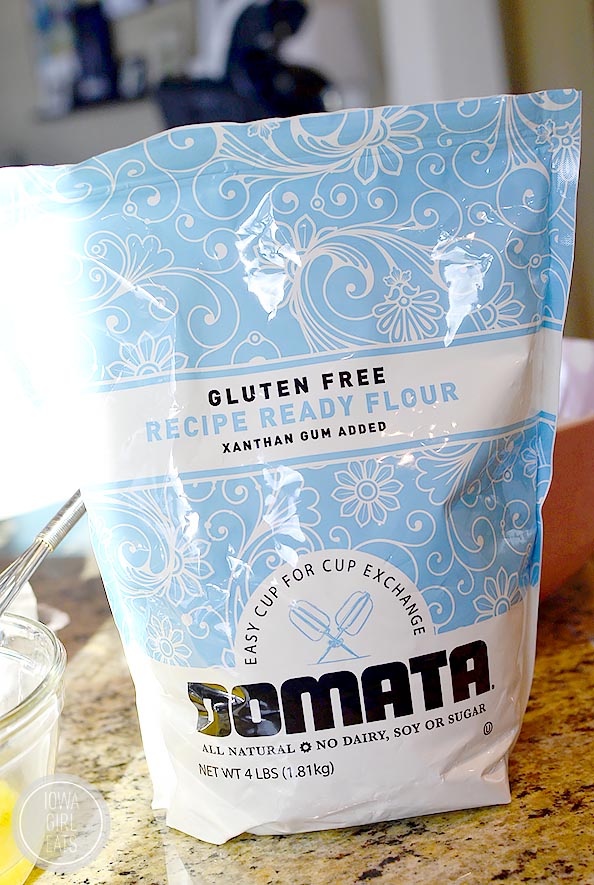 Scoop the dough onto a heavily floured surface then knead for a few minutes until it comes together in a ball. Cut the dough ball in half then use a rolling pin to roll each half into a rectangular sheet as thin as you can get it. Add flour and flip/rotate the sheet a few times during the rolling process to make sure it’s not sticking. 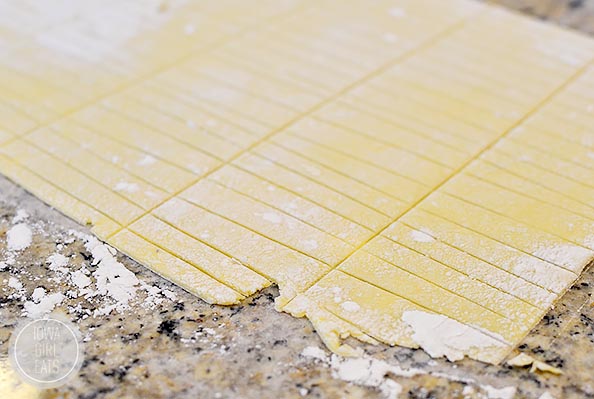 Toss the noodles with extra flour so they’re completely coated and won’t stick to each other then place in a container.

Noodles = DONE! Not so hard, right? 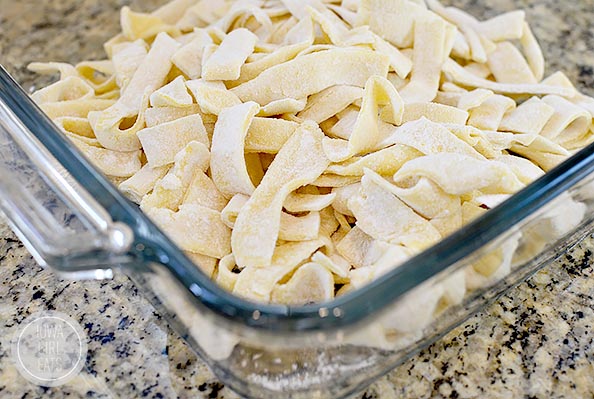 Once the chicken has been removed, sprinkle the noodles into the pot then cook until plump and chewy, 13-15 minutes, stirring often to make sure the noodles aren’t sticking to the bottom of the pot. If the liquid is getting too thick just add a splash of extra chicken broth. 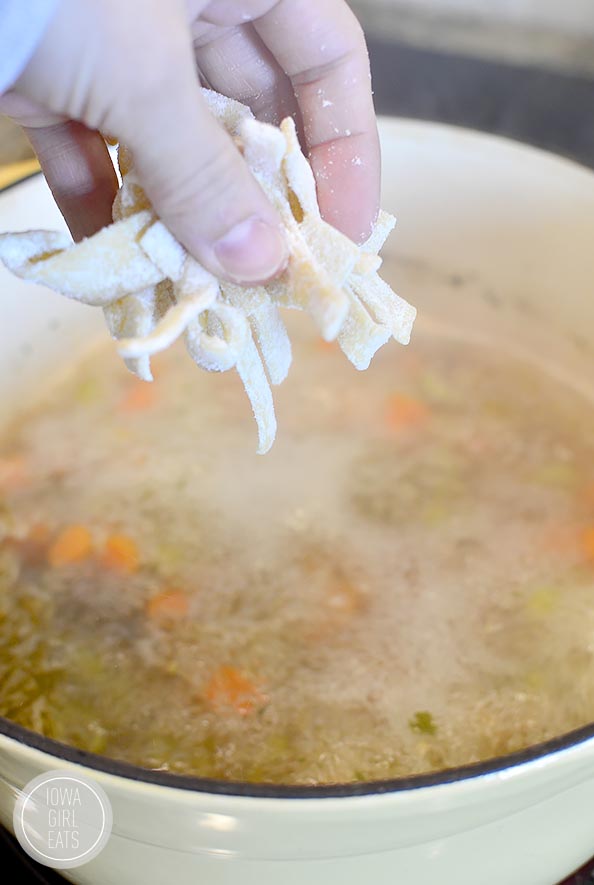 After the noodles are cooked add the chicken back in plus 1/2 cup frozen peas and 1 cup milk (any kind, I used unsweetened almond milk) shaken in a jar with 2 Tablespoons gluten-free flour (I used the same blend as I did for the noodles,) then cook until the mixture is thick and bubbly, 4-5 minutes. 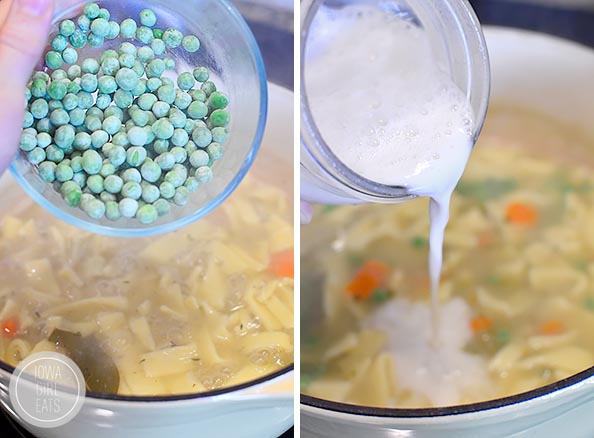 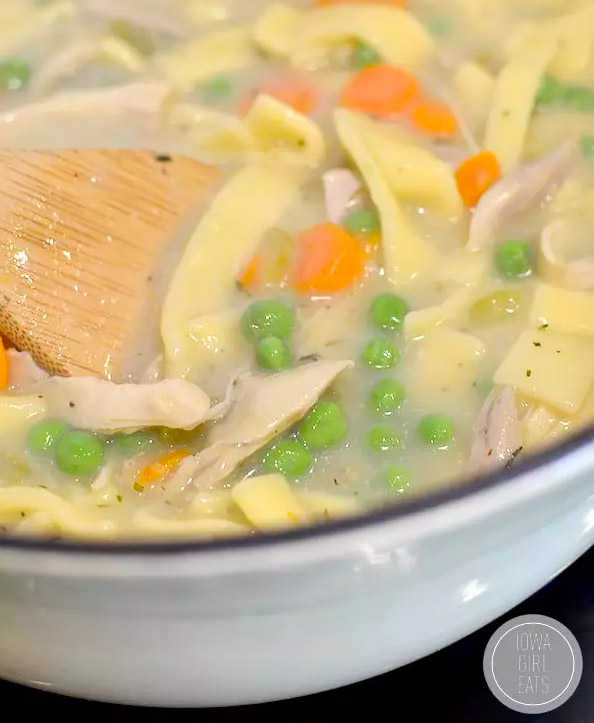 Taste then add more salt and pepper and remove the pot from the heat. Let the dish sit and thicken for 10 minutes before scooping into bowls and serving! I hope you LOVE this super comforting, gluten free dish – enjoy! 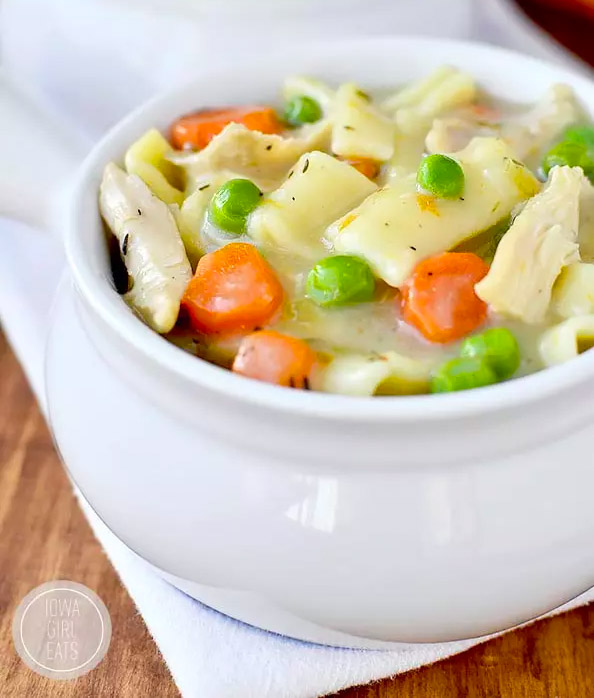 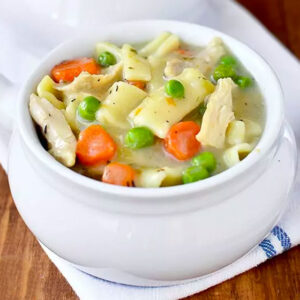 Gluten Free Homestyle Chicken and Noodles is comfort food at its finest! Thick and comforting with chewy, homemade gluten free noodles - there is nothing better!