Mushroom Cap Pizza Bites are the perfect healthy pizza bite. Decadent yet better for you! 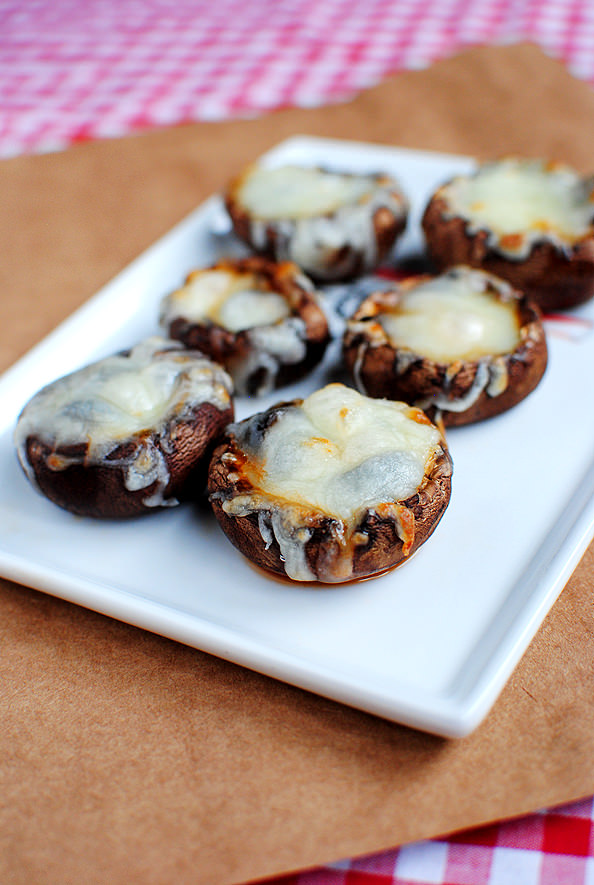 Last Saturday Ben and I were on a romantic lunch date at Costco, eating samples and looking at tents hanging from the ceiling, when we turned a corner past the hummus tubs and both let out a tiny gasp.

Bagel Bites! we whispered in unison, both way too excited about the bite-sized frozen pizzas on wee bagels that were being demo’d in front of the freezer aisles.

“I seriously ate bagel bites like, everysingleday when I was a kid.” Ben confessed.

“Um, me too! So much better than pizza…not on a bagel!”

“Dang, that guy just took the last sample. Should we wait for the next batch?”

So we did, indeed, stand there like those Costco people until the next piping hot batch of bagel bites came out of the sampler woman’s tiny portable oven all hot and cheesy 2 minutes later. 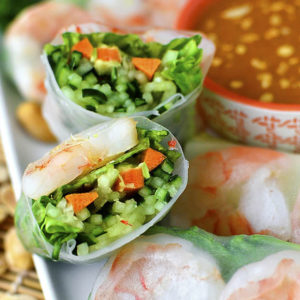 These are even better than I remember!” I reminisced, burning the roof of my mouth.

“We should probably get a bag, don’t you think?”

“Are you crazy?! I’ll eat all 1800 bites in one sitting, then where would we be? No, I’m going to recreate these at home…and make ’em healthy!” 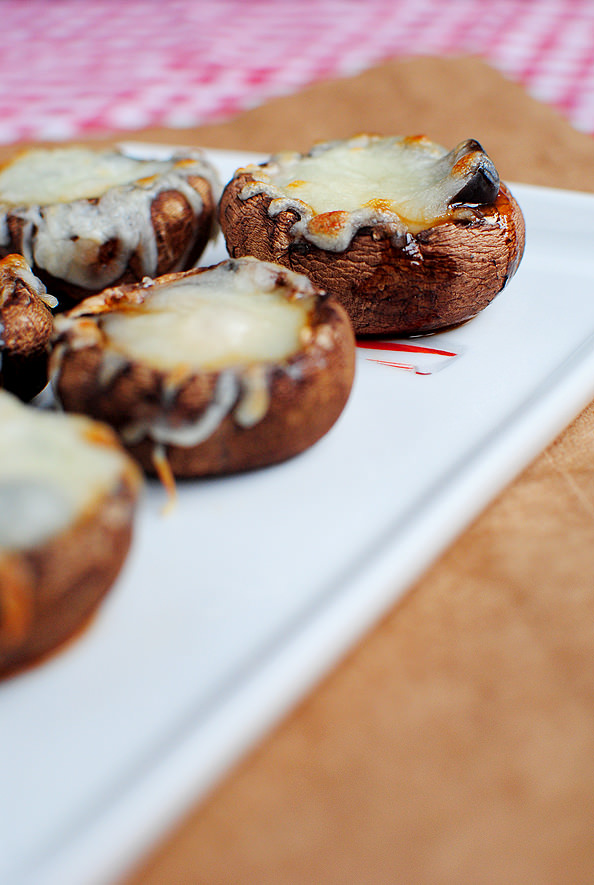 First things first, if there’s one thing you gotta know about me, it’s that I hate mushrooms. The only thing worse than their cholorine-like smell when cooking, is their rubbery, squeaky texture. I’d rather eat cooked carrots, which is really saying something. 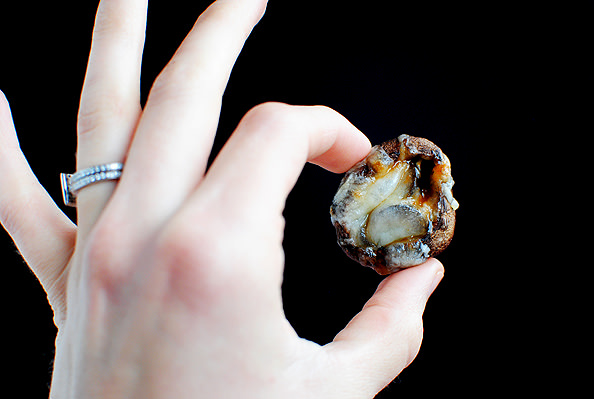 Something about the idea of stuffing mushroom caps with pizza toppings sounded oddly appealing to me though. Perhaps it was the idea of baking the mushrooms instead of sauteing them? Stuffing the caps instead of slicing them up? The promise of melted cheese? 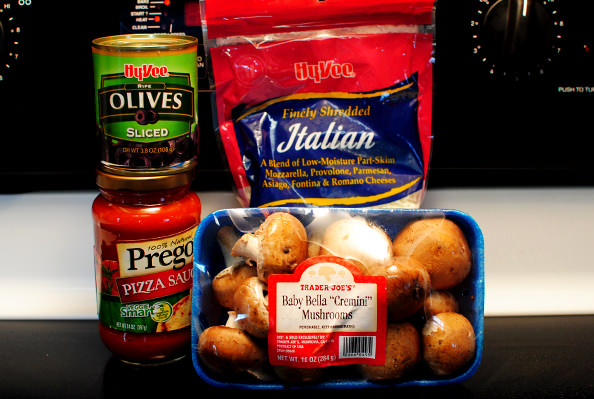 I couldn’t pin point it, but Ben adores mushrooms so, I said to heck with it and decided to give them a go. 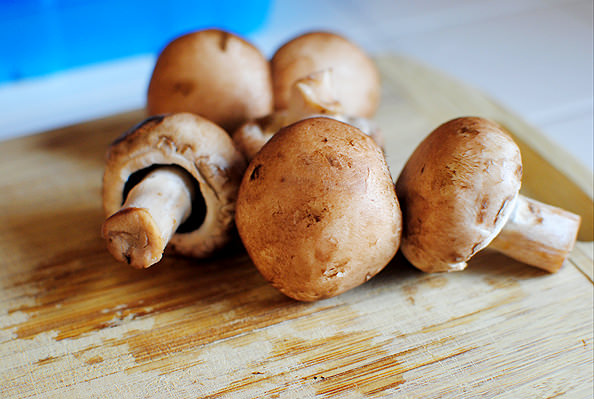 Start the Mushroom Cap Pizza Bites by snapping the stems off a carton of cremini mushrooms that have been washed and patted dry. You could use white button mushrooms, or even big shitakes it you want, but I thought baby steps and went with the medium-sized creminis. 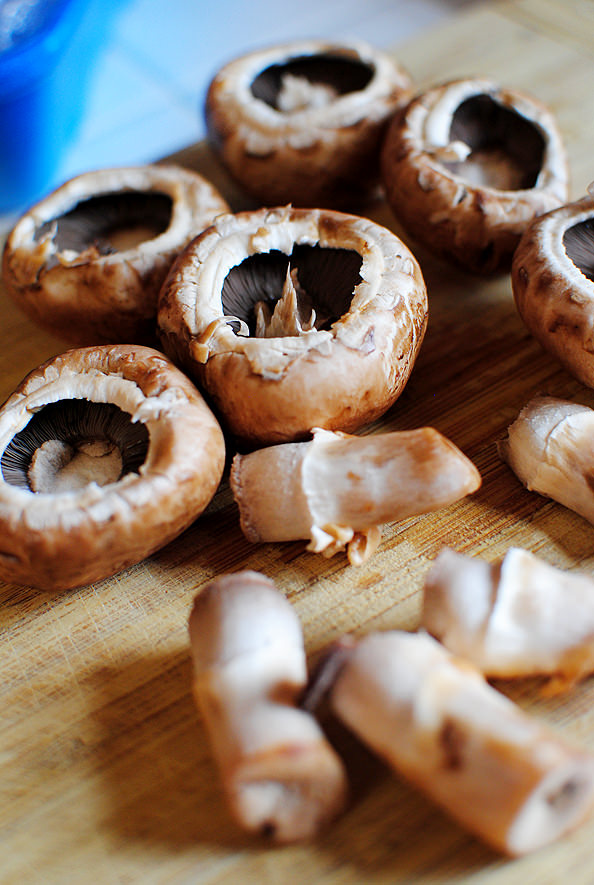 Scrape out the insides of the caps with a small measuring spoon. I’m not a huge fan of saving stems for other uses, but I would definitely freeze the scooped out part to add to soups, stews or anything made with ground meat, as mushrooms pump up the volume for virtually no calories, and are high in Vitamins B and D. 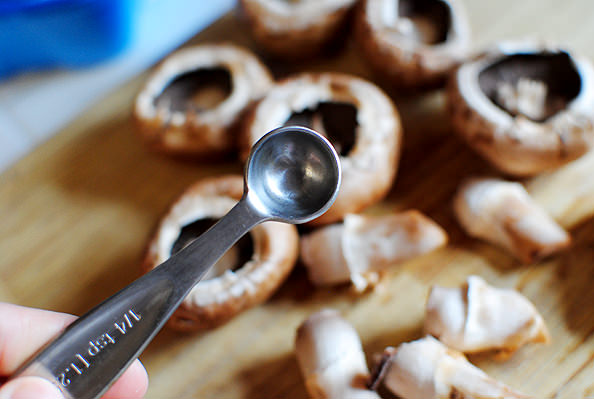 Be careful not to crack the caps, and don’t scoop too much out or else your mushrooms will collapse. You’ll know how much is enough when you’re doing it.

Pre-heat the oven to 400 degrees, then bake the hollowed out mushroom caps for 6 minutes. Afterwards they’ll be a little shriveled, and filled with liquid. Pour the liquid out, then place the caps back on the baking sheet, and turn the oven to broil. 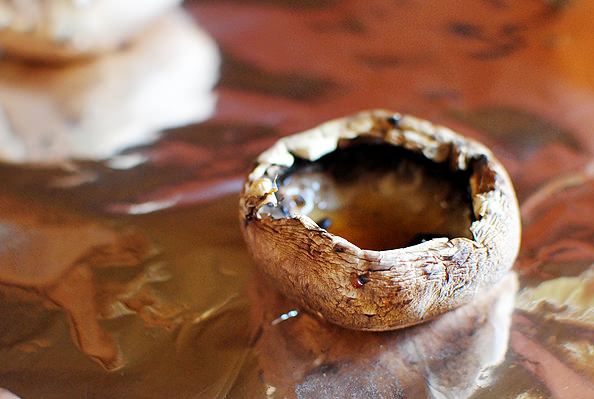 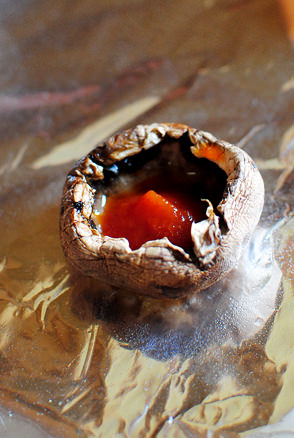 Top the caps with finely shredded mozzarella cheese, then pop under the broiler for a minute or two, until the cheese is melted and golden brown. 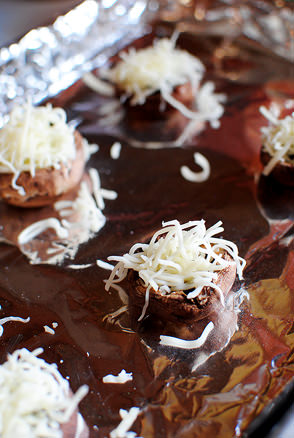 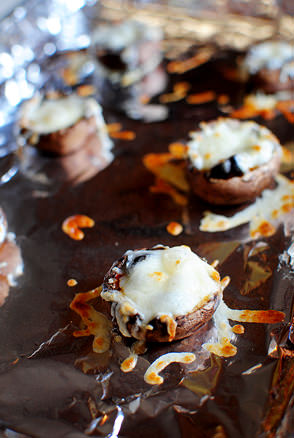 I ate a mushroom, and I liked it! 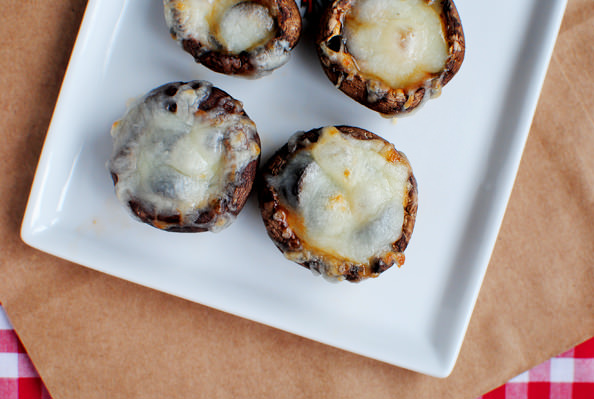 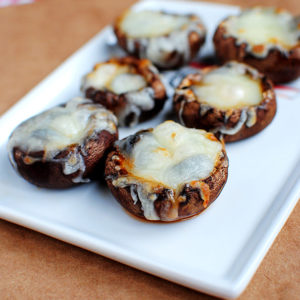 Mushroom Cap Pizza Bites are the perfect healthy pizza bite. Decadent yet better for you!

I devoured 6 cheesy, delicious bites before I started getting a little gaggy. The flavor of the cremini mushrooms actually reminded me of pizza crust a little, but it was still a mushroom ya know? Totally a texture thing! 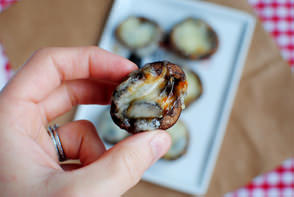 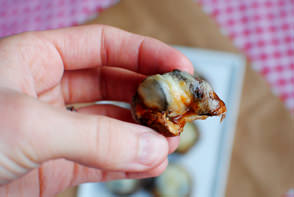 Mushroom lovers: you will rejoice, much like Ben did, at these hot, stuffed Mushroom Cap Pizza Bites! Healthy, customizable, easy (seriously, ready from start to finish in 15 minutes) and just fun, ya’ know? Make a double batch to serve as a light supper with a side salad, or even as an appetizer that will go quickly at your next get together. PS can I please show you the hilarious appetizer plates my friend Lindsey got me from Crate & Barrel? It’s a set of 4 and each plate has this little man interacting with images of food, including riding a biscotti like a sled, and burning his tongue on jalapeno slices. So cute! ;) 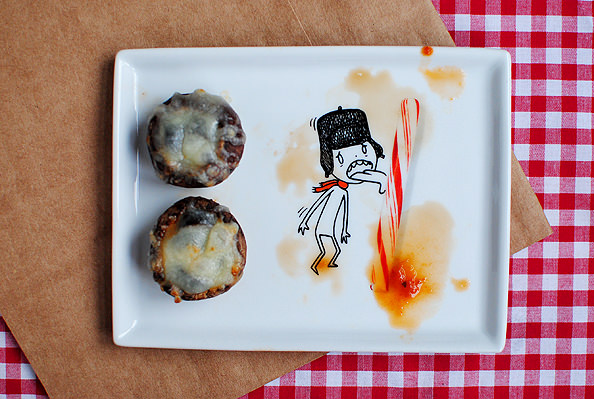