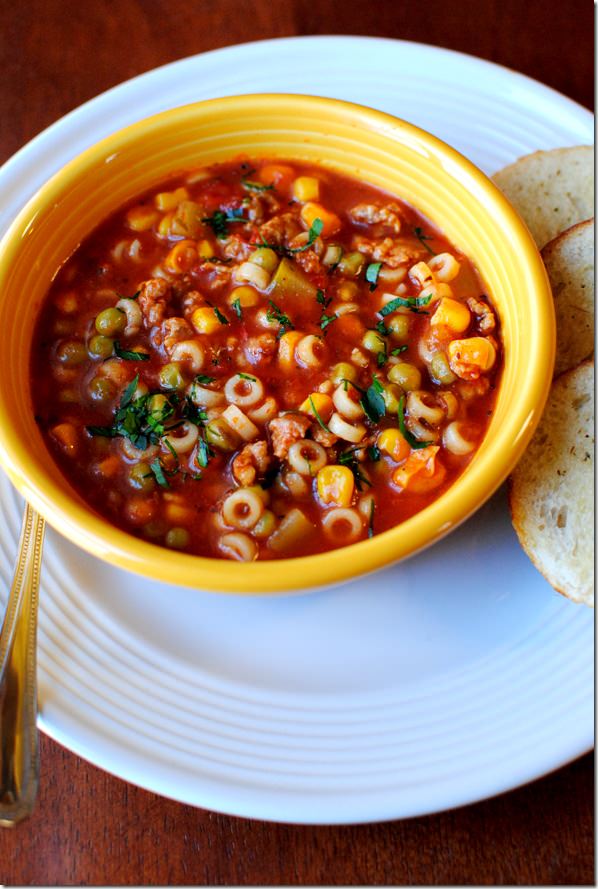 Sundays are all about routine in our house.

I wake up early, around 8am or so if I’m feeling particularly indulgent, then spend a couple hours prepping dinners for the week in the kitchen. Chopping and simmering with a hot cup of coffee in one hand and a spatula in the other, enjoying a couple hours of quiet time in the morning before Ben gets up.

Ben’s a sleeper. He’d snooze until 3pm everyday if it were PC, but if he wants to go to bed on time that night and not throw his whole week off, his requested wake up call comes at 10am on Sunday mornings.

I tiptoe into the bedroom, interrupt dreamland with a few back scratches, and 15 minutes later when he’s still not up, holler empty threats from the living room where I’m now stationed, catching up on emails and freelance projects. Eventually he’ll appear at the top of the stairs, hair a mess, eyes half shut – but awake – and announce his plans for the day.

These usually consist of catching up on the honey-do list he’s put off all weekend or, in the summertime, deciding on what meat to smoke that afternoon.

We’ll come together a few hours later for a trip to the gym if we’re feeling motivated, then to Costco for a new microwave since the current one sparks if we heat butter or anything with butter in it, or take a nice long walk in the warmer months.

Back in 2008-2009, Ben would head to Wok in Motion around 5pm to get us Vegetarian Fried Rice for supper, which we’d eat until nearly exploding and vow to never do again…until the next Sunday. In 2010-2011, he was most likely heading to Chipotle, where it was pretty much the same story, different dinner. Here in the present, though, we’ve gotten into the routine of making our Sunday night supper every week. Something grilled in the summer, roasted in the Fall, stir fried in the Spring, and simmered in the winter – usually a hearty, flavorful soup that we’ll enjoy curled up on the couch, waiting for our shows to come on.

Well, today was absolutely no different, and after a trip to the gym, Target, and Costco – seriously, why butter? – we just finished dining on Minestrone with Baked Garlic Bread for dinner.

The recipe for this “kitchen sink” type soup was sent to me from a reader, and combines oodles of veggies with a savory broth, tiny noodles and spicy Italian sausage. It is absolutely delish! 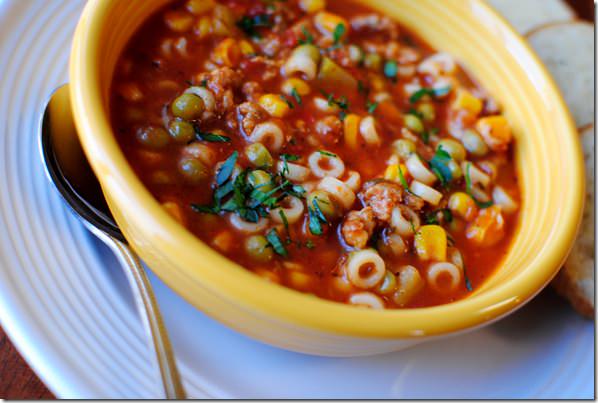 Start the soup by browning Italian sausage. If there’s a lot of fat that cooks out, drain it and return to the pot. Then add in spicy marinara sauce. I used Gino’s obviously! 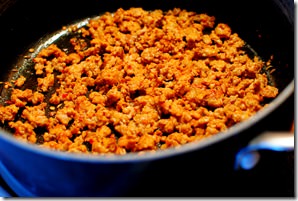 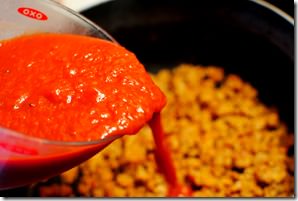 Next add water and a beef bullion cube, followed by 3 cups of vegetables. 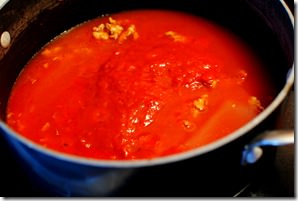 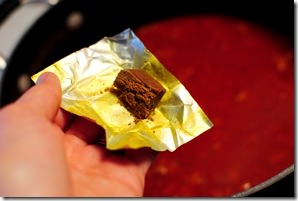 You could used any mix of veggies you want – mushrooms, carrots, celery, etc. – but I used frozen peas (Ben’s fave), golden corn, and fresh zucchini. Top the veggies with Italian seasoning, dried parsley, salt and pepper. 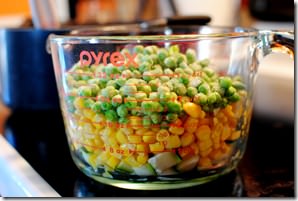 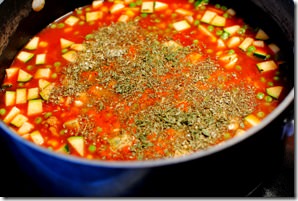 Sprinkle in a bit of parmesan cheese, and simmer until the veggies are soft. 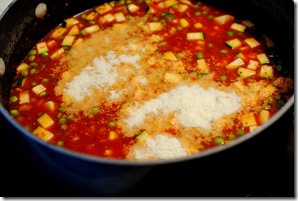 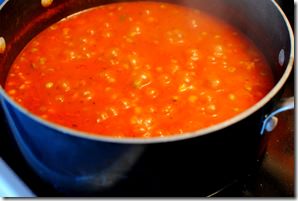 Finally, add in just 1/2 cup (it’s amazing how much these expand) of any kind of tiny pasta – regular or gluten-free. 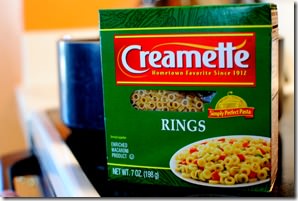 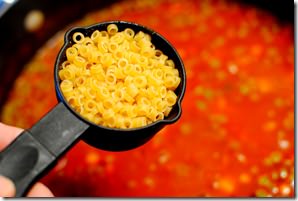 Cook until the pasta is soft, and you’re set. 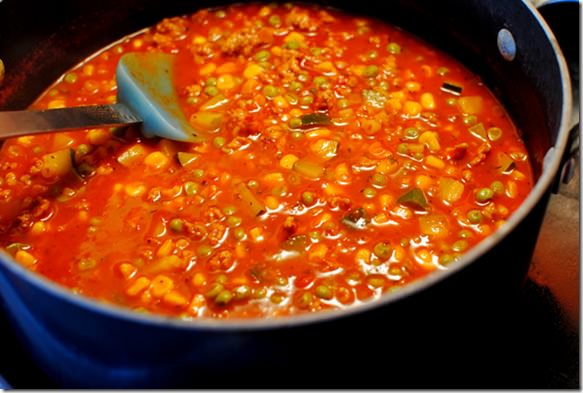 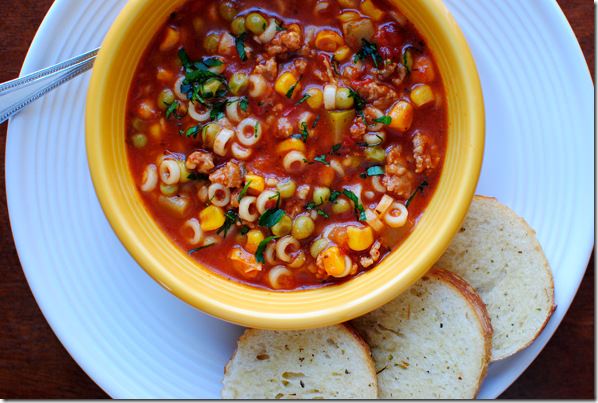 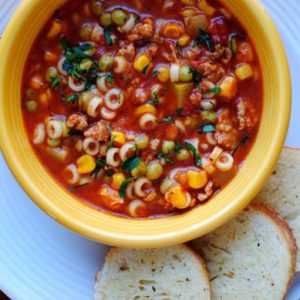 Slightly adapted from I am Momma Hear Me Roar

The spicy marinara sauce and sausage gave this soup substance, while the veggies keep it light. I could have eaten BOWLS of this stuff. Luckily it made a ton – plenty of leftovers for lunches this week! 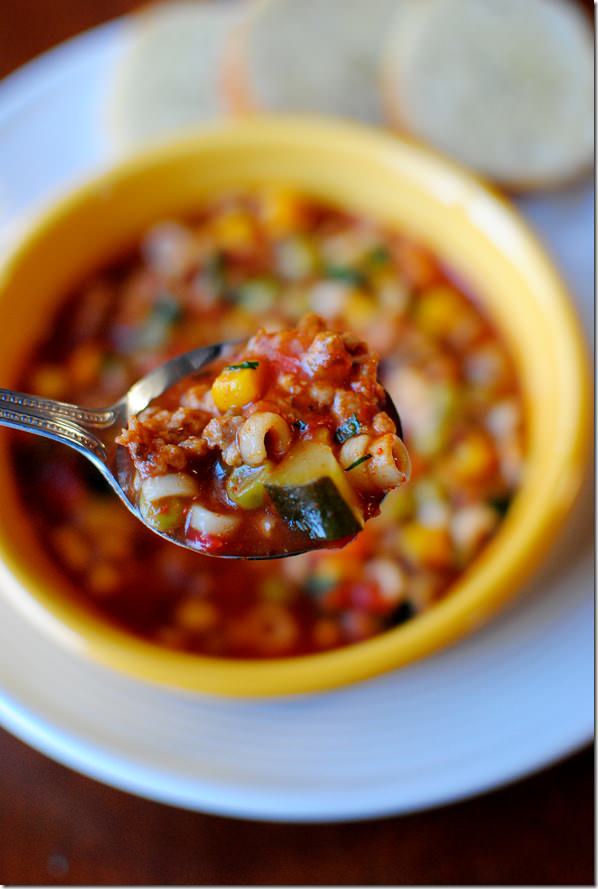