Sweet Corn and Bacon Skillet Mac & Cheese is made right on the stove top. Easy and perfectly cheesy! 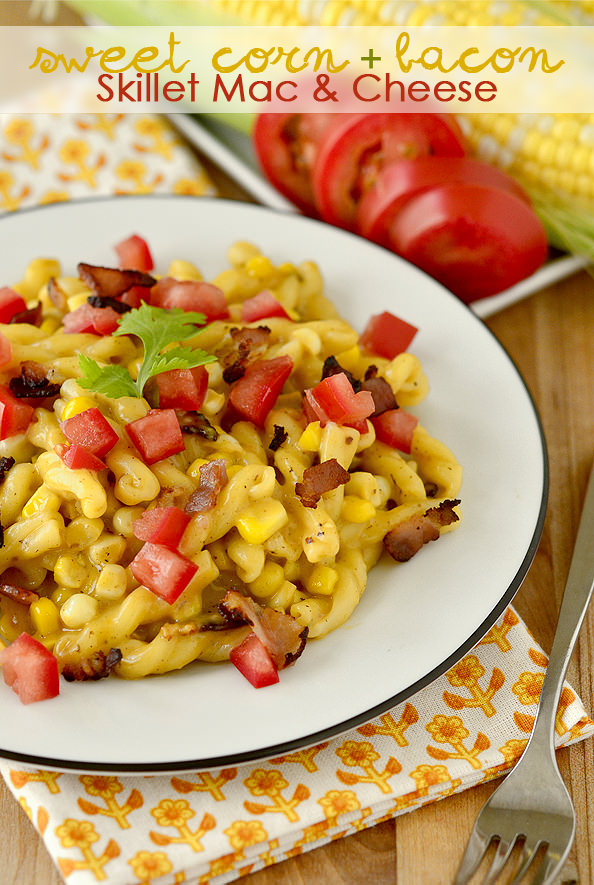 Before I got pregnant I had big dreams about the crazy cravings I wouldn’t be able to resist during the 9 months we’d be cookin’ up this baby.

Oreos dipped in peanut butter. A salty pickle in one hand, sweet ice cream in another. And most definitely sending Ben out semi-regularly to pick up movie theater popcorn without even seeing a movie. Extra butter, naturally.

Well here we are with 2 weeks to go and…nothing. Still no sudden urges that won’t dissipate until the craving has been crushed, still no melt downs, still no gotta have it NOW. Nothing!

Except, for mac and cheese.

Honest to God, I have looked at this post at least 3 times a week over the last 8 months, trying to justify eating one pot mac and cheese for every single meal of the day. I can’t get enough! Is it the carbs? The cheese? The creaminess of it all? Probably (say it with me) all. The. Things!

I’m surprised the dish hasn’t made an appearance more often on the blog over the winter and spring, probably because I turn to good ol’ Annie’s so frequently for a quick fix, but this recent homemade concoction was too good to not share. Sweet Corn and Bacon Skillet Mac & Cheese. 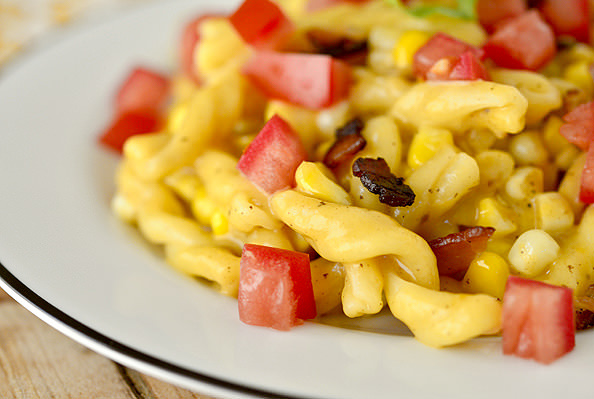 Creamy mac and cheese laced with smoky bacon and sweet corn, topped with fresh chopped tomatoes. The combo is quickly assembled right on the stove top, which is KEY for when that mac and cheese craving hits. No baking required!

The sweet corn in here just blows my mind. I considered doubling the amount after the first taste, but then I figured it might be more like cheesy corn with pasta….which doesn’t sound half bad, actually! Crisp bacon balances out the sweet, and chopped tomatoes provide a fresh flavor burst on top. Whether you’re a mac & cheese-craving Mama to be, or just mad about mac (who can blame ya’) I think you’ll love this dish! 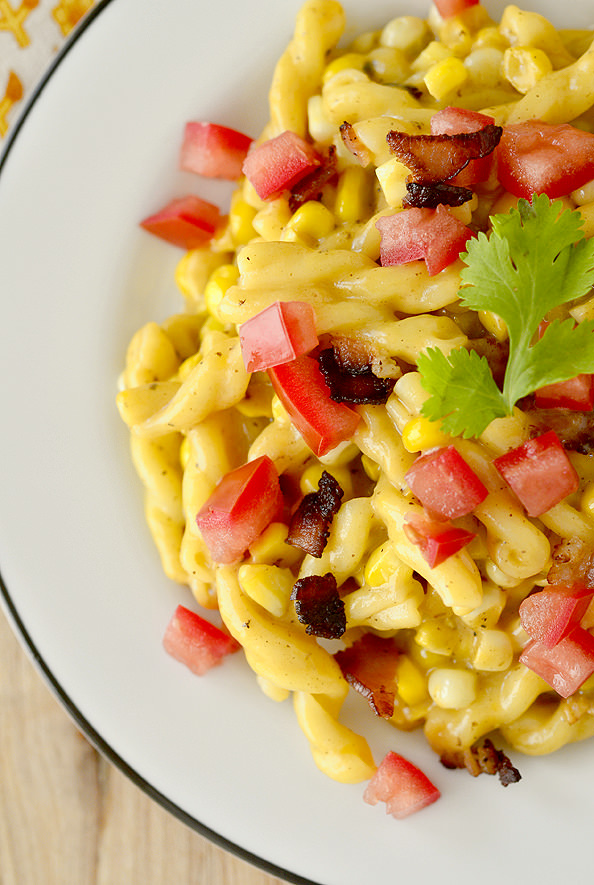 Start by dropping 1/2lb gluten-free or regular gemelli (or any other short-cut pasta) into salted, boiling water. Cook until al dente then drain and set aside. 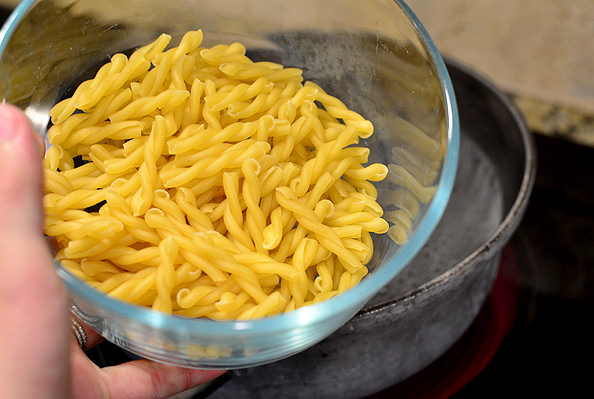 Next, heat a large skillet over medium heat then add 4 strips chopped bacon. Cook until crisp then remove to a paper towel-lined plate and set aside. Remove all but 1 teaspoon bacon fat from the skillet. 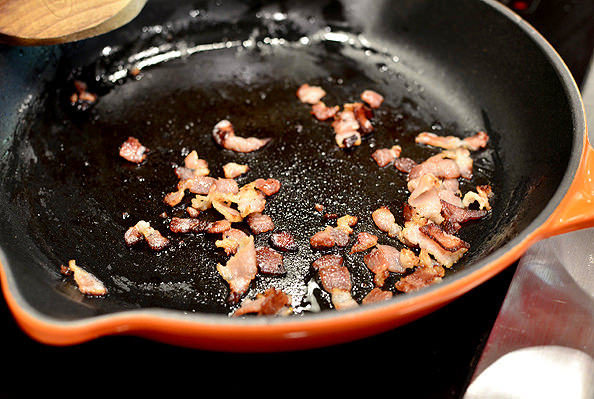 Now add my favorite part – the sweet corn! You’ll need 1-1/2 cups sweet corn kernels (about 2 ears of corn.) This tri-colored corn I recently got was sweeter than candy. MMM! Saute the corn for 3-4 minutes, just until it’s barely tender, seasoning with a bit of salt and pepper. 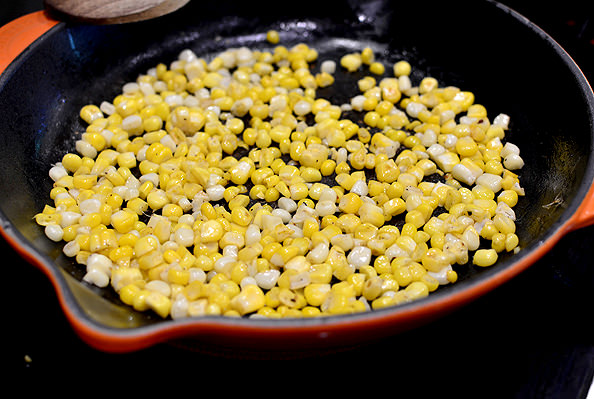 FYI – there are lots of ways to get corn off the cob but the easiest way I know how, without having kernels fly all over the kitchen, is to lay the cob on a cutting board and cut off a strip. Rotate so the just-cut side is flat against the cutting board then cut off another strip. Keep going until you get all around the cob. 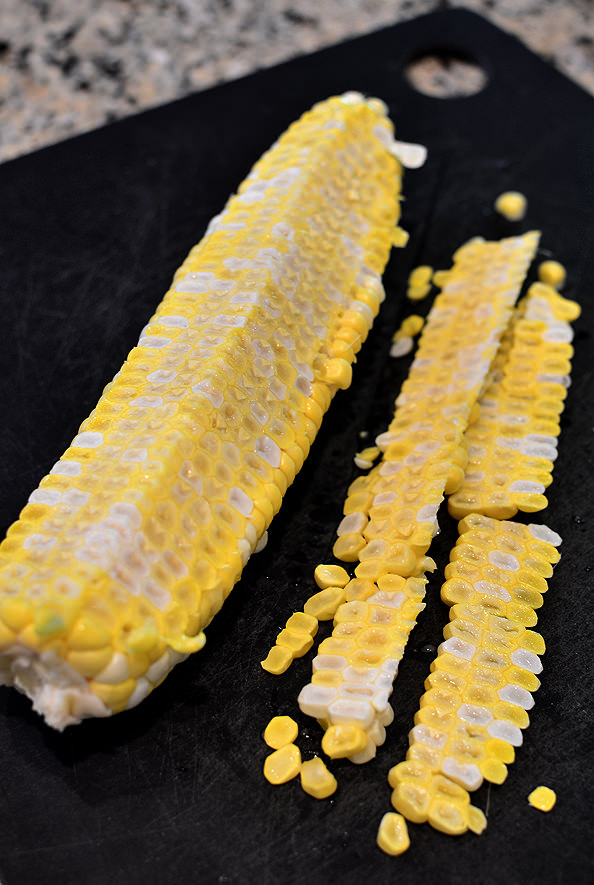 Once the corn is tender, remove it to a plate then melt 2 Tablespoons butter in the skillet. Next add 2 Tablespoons gluten-free or all-purpose flour, stir to combine, and then cook for 30 seconds or so.

Slowly stream in 1 cup each milk (I used skim) and chicken broth, season with salt and pepper, and then stir until the sauce is thickened and bubbly, about 5 minutes. Remove the skillet from the heat then stir in 2 cups shredded cheddar cheese (hand-shredded if possible!)

Add the cooked pasta, corn, and bacon into the skillet then stir to combine. 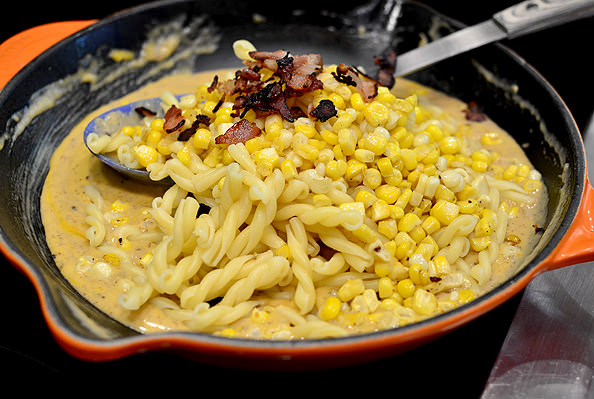 Pile onto plates, top with chopped tomatoes, and crush that mac & cheese craving! 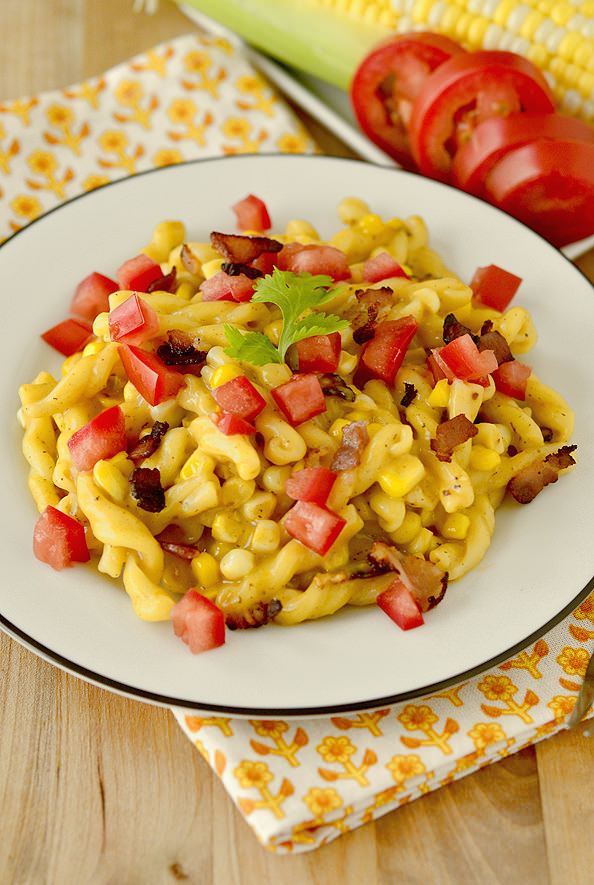 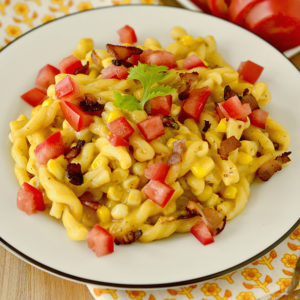 Sweet Corn and Bacon Skillet Mac & Cheese is made right on the stove top - no baking required! 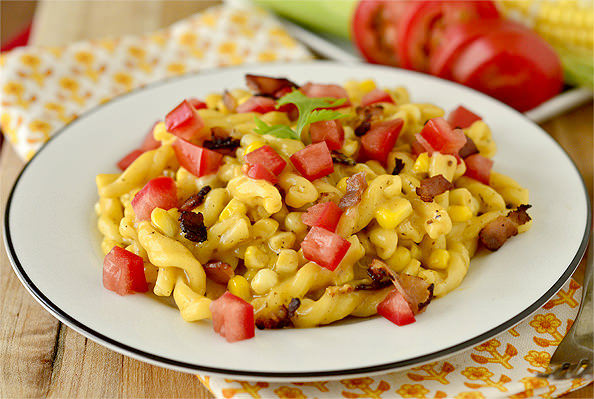 Thick, creamy, and decadent, this Sweet Corn and Bacon Mac & Cheese is hard to keep your fork out of. Hope you enjoy! 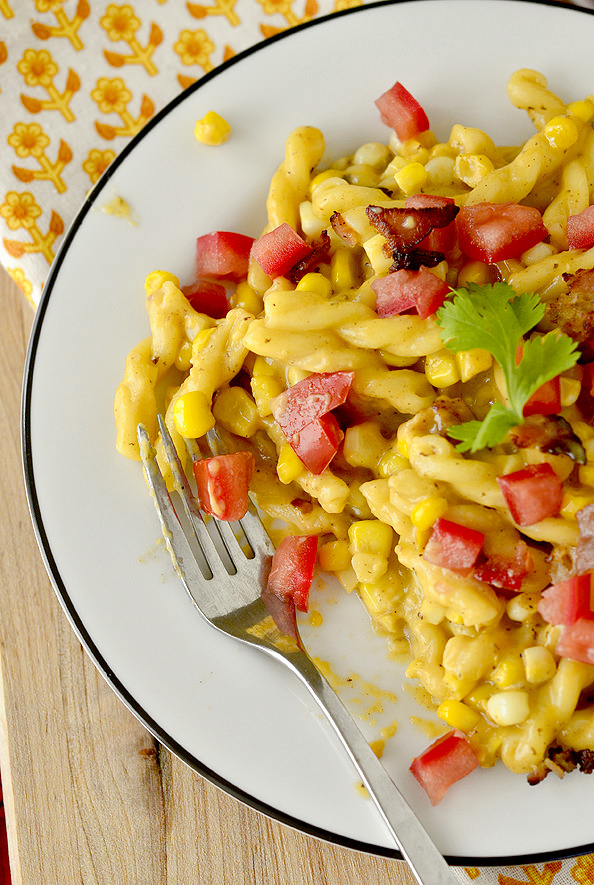