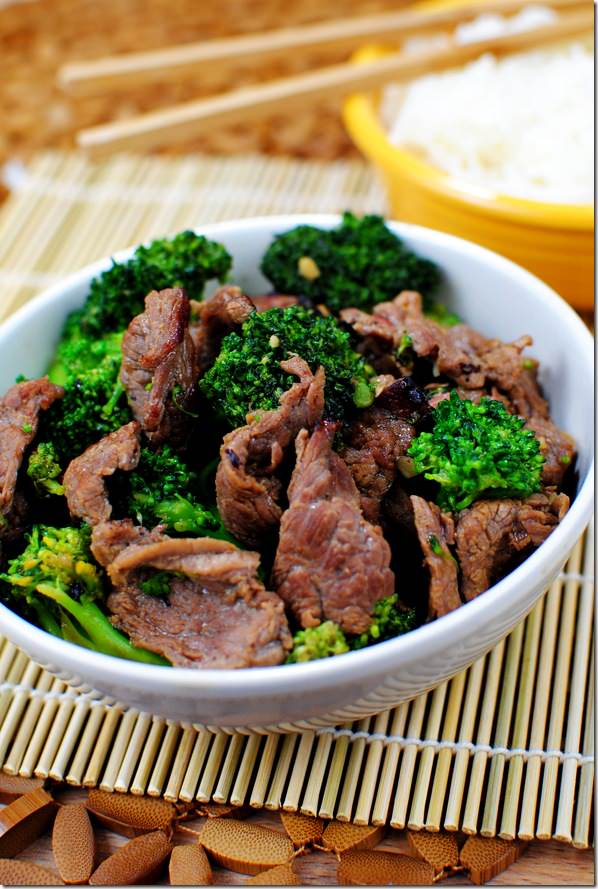 Lately Ben and I have been craving Chinese food something fierce.

But for a guy who’s watching his cholesterol, and a girl who’s hyper-aware of the fact that she’ll be wearing a bikini in about a month, a trip to the local Chinese food buffet is simply, some may say tragically, out of the question.

Yes, if we’re going to feed our far-east food fixation, there’s only one place where it’s going to happen – at home. In my kitchen to be exact, where I can control the amount of fat and salt in my Chinese food, and serve non-super-human sized portions, like in tonight’s dinner of Broccoli Beef. This is hands down the best Chinese dish I have ever made at home. Ben yelled obscene things regarding its utter deliciousness after his first bite. Ok, me too.

Bonus: after some prep work it took less than five minutes to cook. Literally from the time Ben walked in the door, took off his shoes and changed, I had stir fried succulent strips of flank steak, added in tender spears of broccoli, and swirled it all together in a salty, savory sauce. AMAZING!! 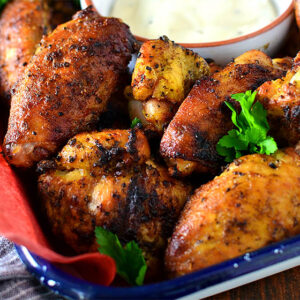 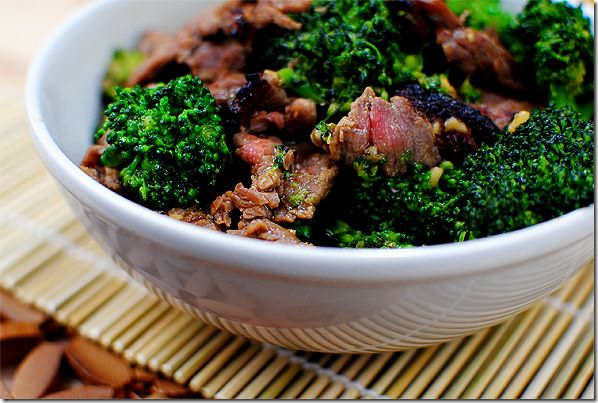 Start the dish with that little bit of prep work I mentioned. First, thinly slice 3/4lb flank steak against the grain. Flank steak is a pretty legit cut of beef in terms of tenderness (very), time it takes to cook (none), and price (relatively inexpensive). It’s also lower in fat than other cuts of beef, which makes it a great choice for Ben and me. 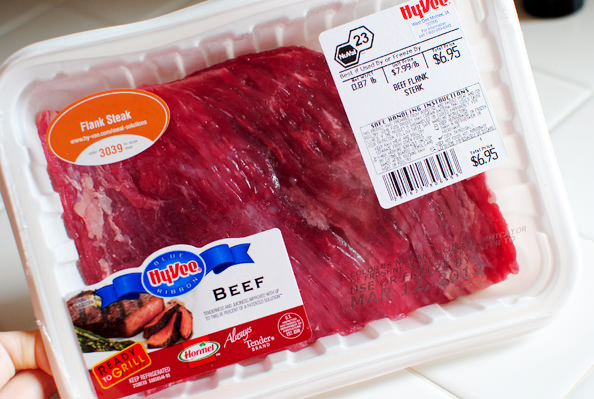 Place the slices in a plastic ziplock bag, add a mixture of cornstarch, mirin, and gluten free tamari or soy sauce (dish will not be GF if using soy sauce) then mix it all around and let the beef marinate on the countertop for 10 minutes. FYI – mirin is a Japanese cooking wine that you should be able to find in most major grocery stores. Alternatively, you could use a little sherry in its place. 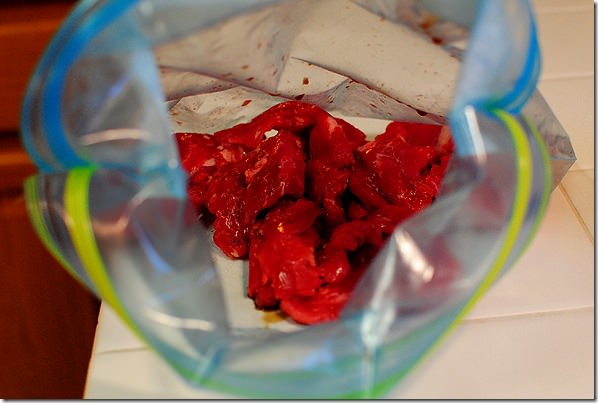 While the beef is marinating, steam 4 cups fresh broccoli for a couple minutes until it’s crisp-tender. Don’t overcook the broccoli (unless you really like mushy broccoli, which I actually do, just not in stir fry) as it will cook a bit more later in the program. 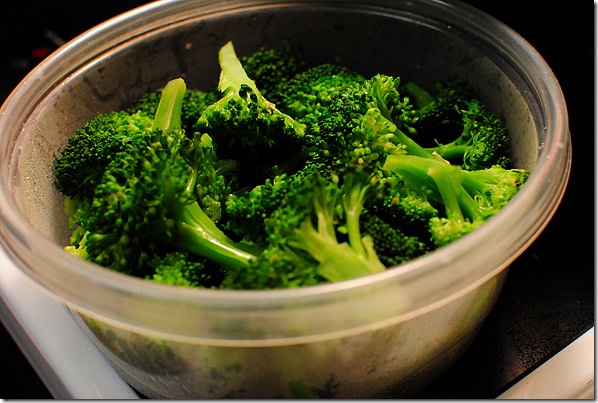 Next create the sauce for the Broccoli Beef by combining mirin, gluten free tamari or soy sauce (dish will not be GF if using soy sauce), chicken broth and oyster sauce together in a bowl. 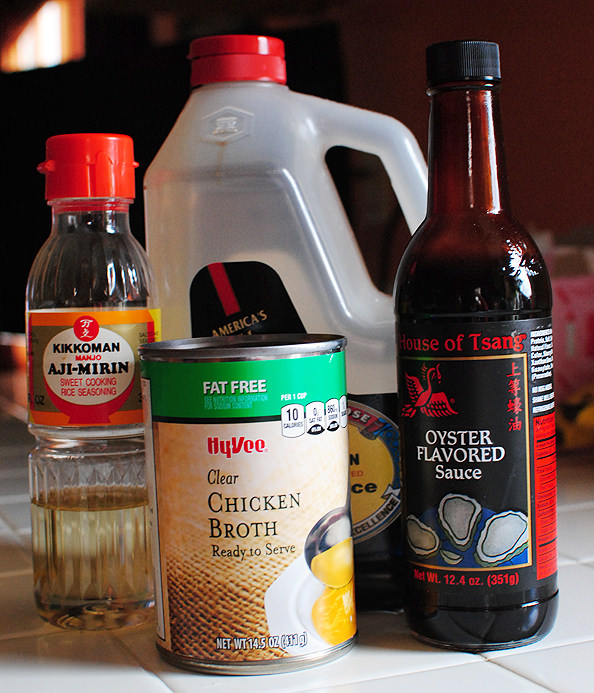 Ok, prep work’s over. Time to get cooking! Whip out your electric wok, regular wok, or the largest skillet you own, and heat it on high – that’s about 350 degrees for you fellow electric wok’ers. 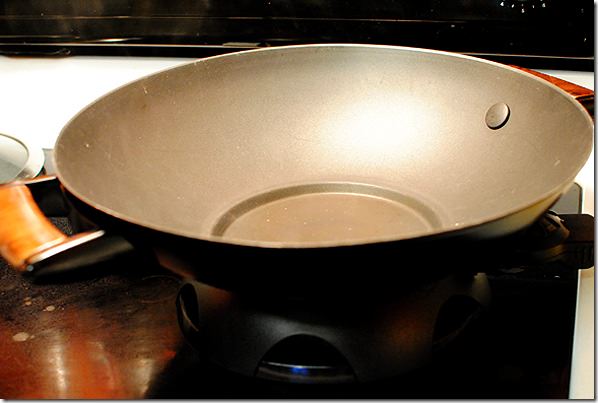 Next, lay out all the ingredients for the Broccoli Beef stir fry BEFORE you start cooking. In addition to the marinated beef slices, cooked broccoli, and sauce, we’ve got 2 teaspoons chopped garlic, 2 teaspoons corn starch dissolved in 2 Tablespoons water, and 1 1/2 Tablespoons Canola oil. 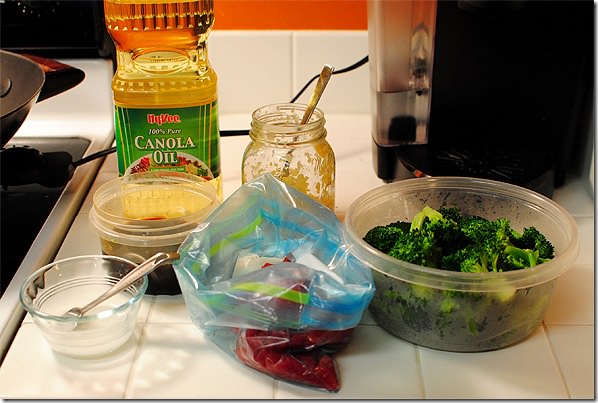 Add the oil to the wok, then gently add the beef slices and spread them out into a single layer. Do not touch the beef for 1 full minute. 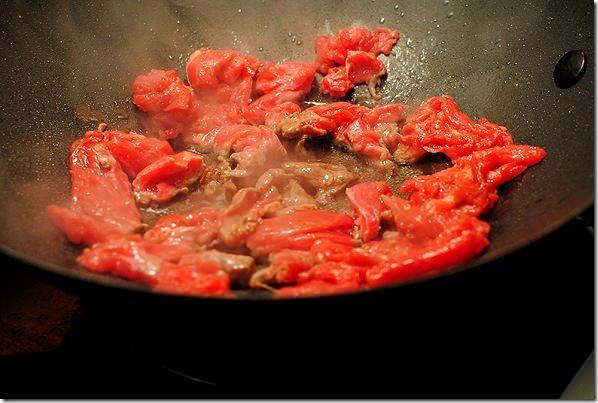 After a minute, stir the beef around, add in the chopped garlic and stir continuously for 1 more minute. 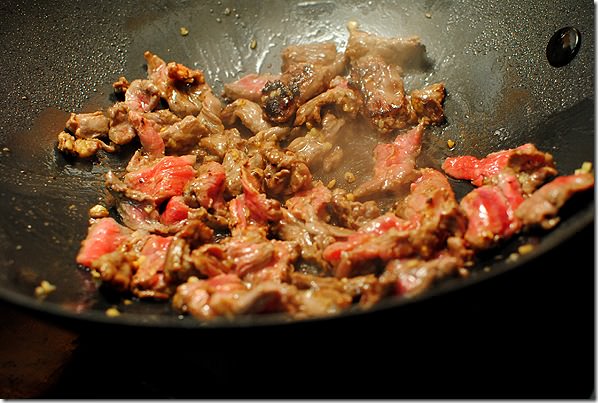 Next pour in the sauce and broccoli, and bring the sauce to a boil. 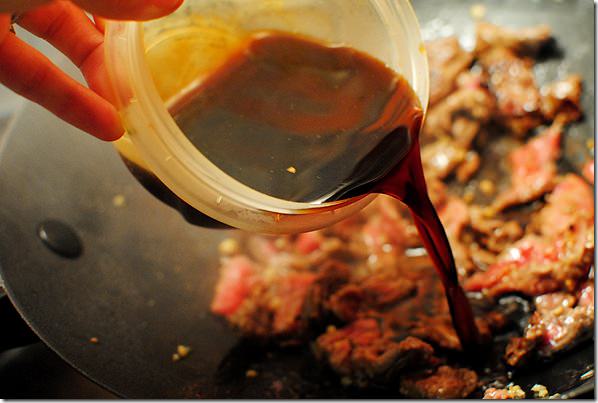 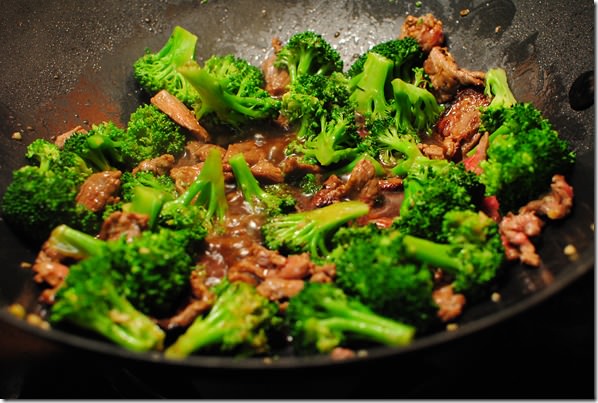 When the sauce is boiling, pour the cornstarch dissolved in water into the wok, and let the sauce bubble until thickened slightly, about 2 minutes or so. 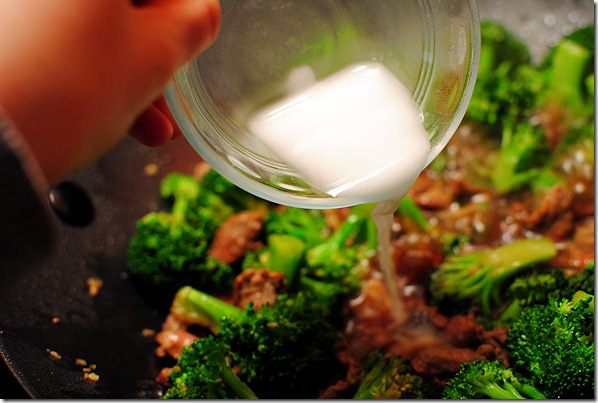 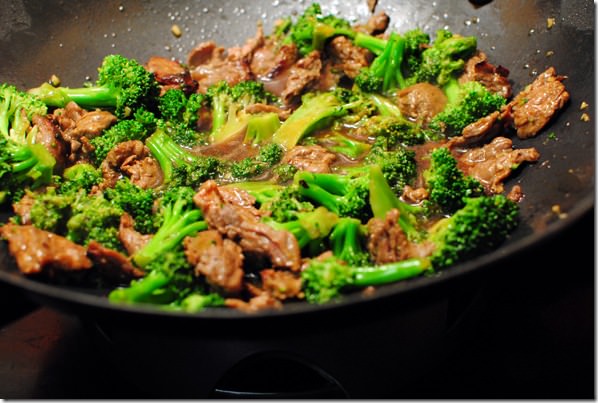 Cook up white rice for the side, if you so desire, and top it with the saucy Broccoli Beef. 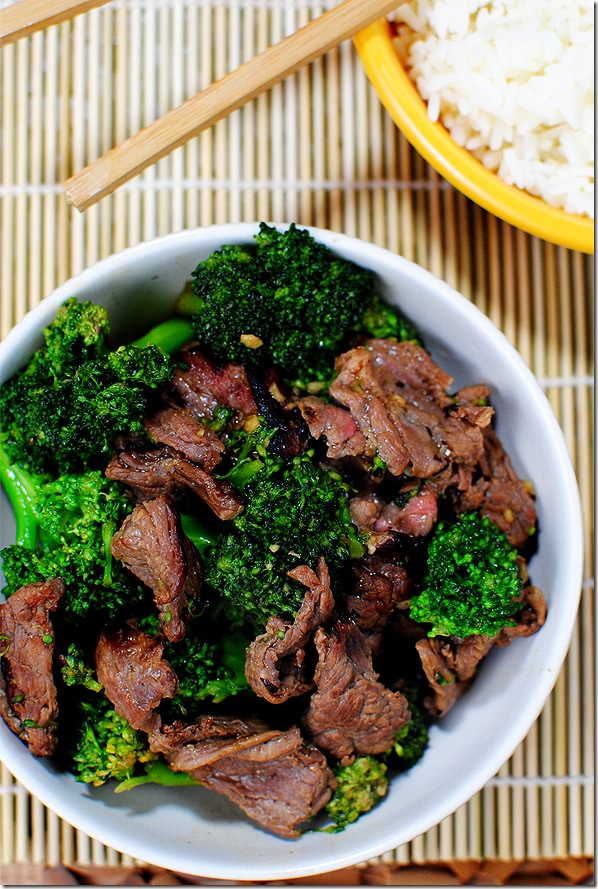 Like I said – hands down easiest and most tastiest Chinese dish I’ve ever made at home! 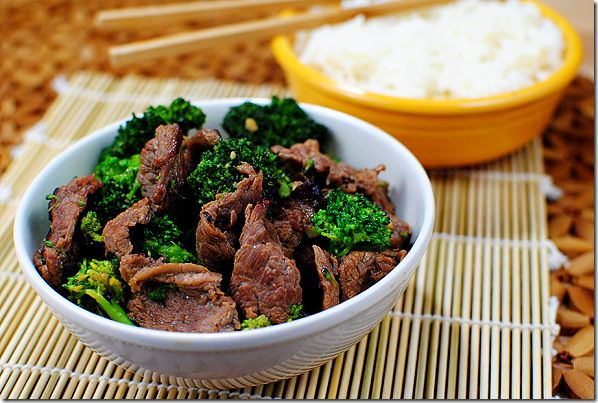 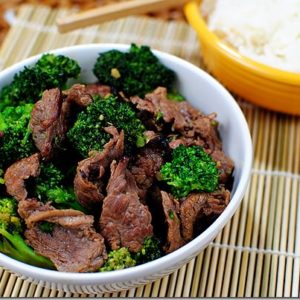 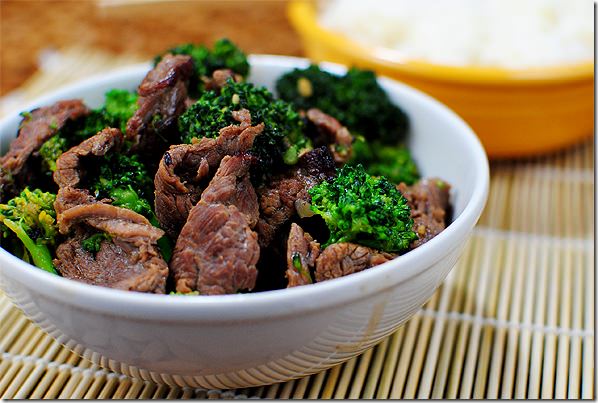 I love how the tamari and oyster sauce lend a deep, savory flavor, while the mirin lends just a wee hint of sweet. The broccoli soaks up all that good sauce too and is so, so, SO good. 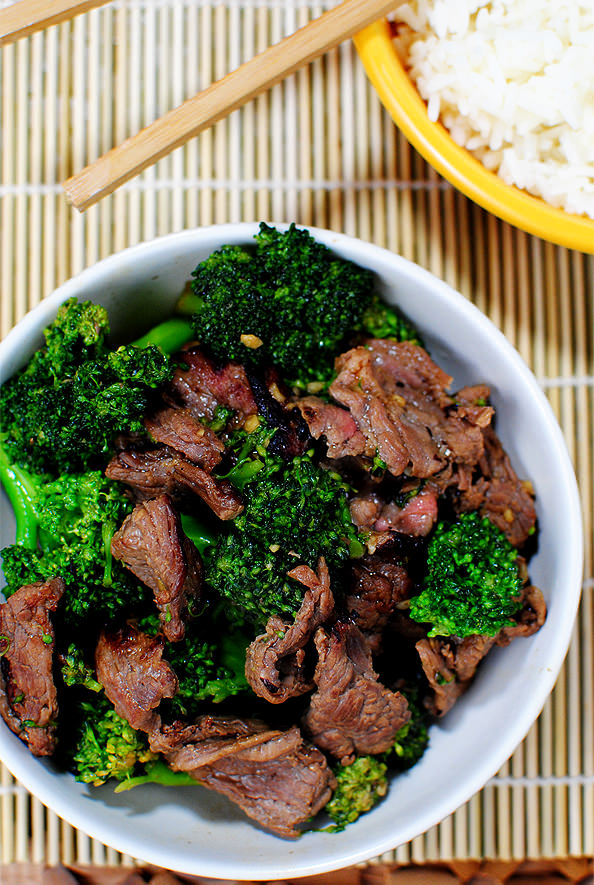 Making Broccoli Beef at home is so much better than getting it from a greasy takeout joint. This was actually really light tasting, with no remorseful groaning on the couch afterwards. You know what I’m talking about… 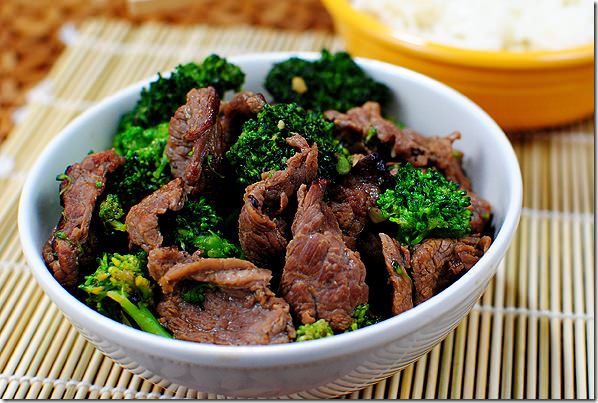