Gluten-Free Blueberry Banana Bread Granola is naturally sweetened and has the unmistakable taste of banana bread. Quick and easy, too! 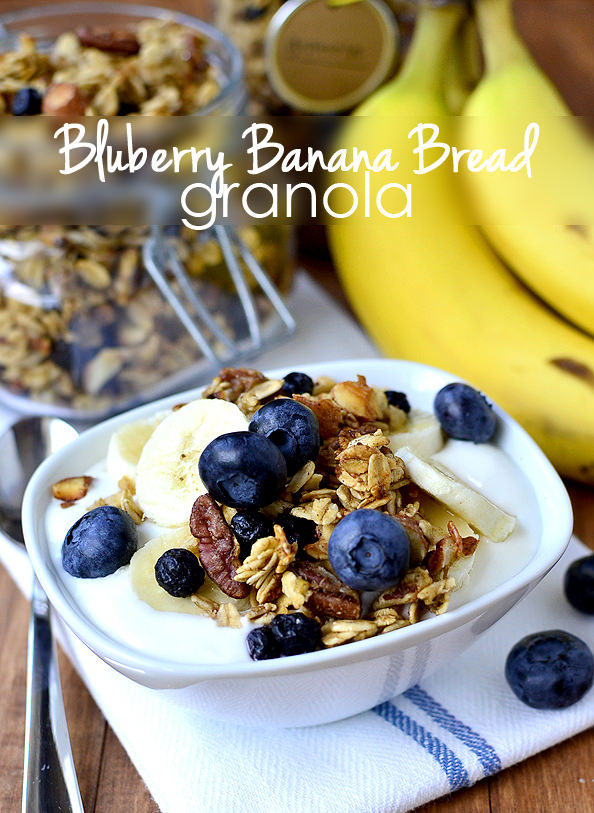 We all sat down then Finn brought out an iPad, giggling with anticipation. Oh man, he said, just you wait! A few clicks later and guess what popped up on the screen? An 80s-inspired, pixelated banana with arms, dancing to the tune of Peanut Butter Jelly time. (I’m laughing at the memory as I type this.) It’s PEANUT BUTTER JELLY TIME, LINCOLN! he screamed, looking at him expectantly.

Poor Finn. Lincoln just sat there. Confused. Then crawled away. I could nearly see the heartbreak on his little face – he’s so sweet! We all made a big deal of it which wasn’t hard because seriously that video is so insanely ridiculous you can’t help but laugh.

I’m surprised Lincoln was less impressed with his dear cousin’s dancing banana video, because he slays bananas in real life – they’re one of his favorite foods. The other night I thought he hurled one off his dinner tray because I cut it up, looked away for a moment, and when I looked back it was nearly gone. Atta boy! That said, we always have a bunch of bananas at home for Lincoln, and for Ben and me too.

Since I took that Go Sugar Free Course we’ve been trying to snack smarter, and a sweet banana or banana ice cream is sometimes all you need at night. That, or a handful of my newest obsession, Blueberry Banana Bread Granola. 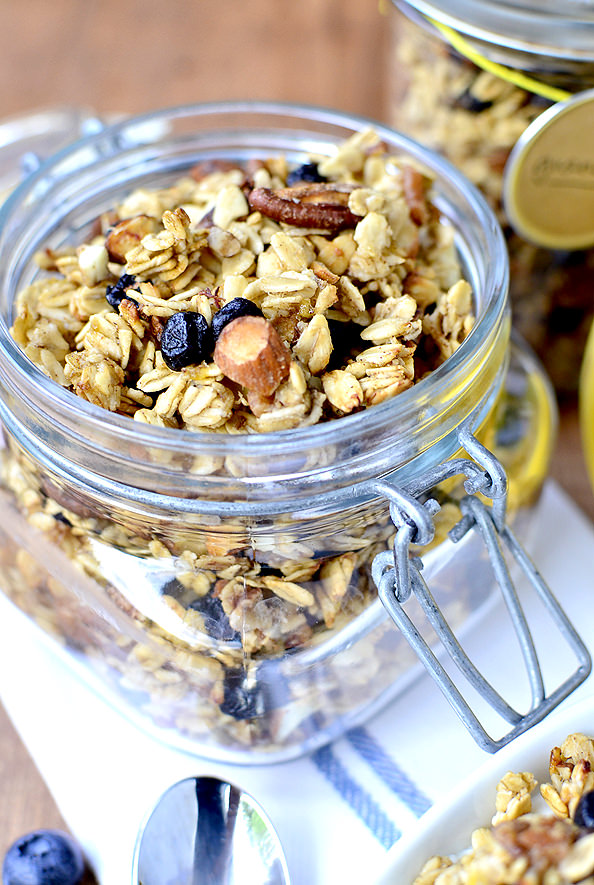 You know how granola is usually laden with excess fat and sugar? Well this recipe replaces some of it with mashed fresh banana – yes! Obviously the benefit is that you can enjoy granola in your morning yogurt or by the handful as a crunchy and satisfying snack with less guilt, but the biggest upside is that it makes the granola taste exactly like a loaf of banana bread studded with blueberries. The flavor is unmistakable!

This granola takes less than 10 minutes to whip up (only 8 by my calculations,) uses all pantry and counter top staples, and bakes in just 15 minutes. The result is pure comfort food. Plus it’s a clumpy granola – everyone’s favorite kind. 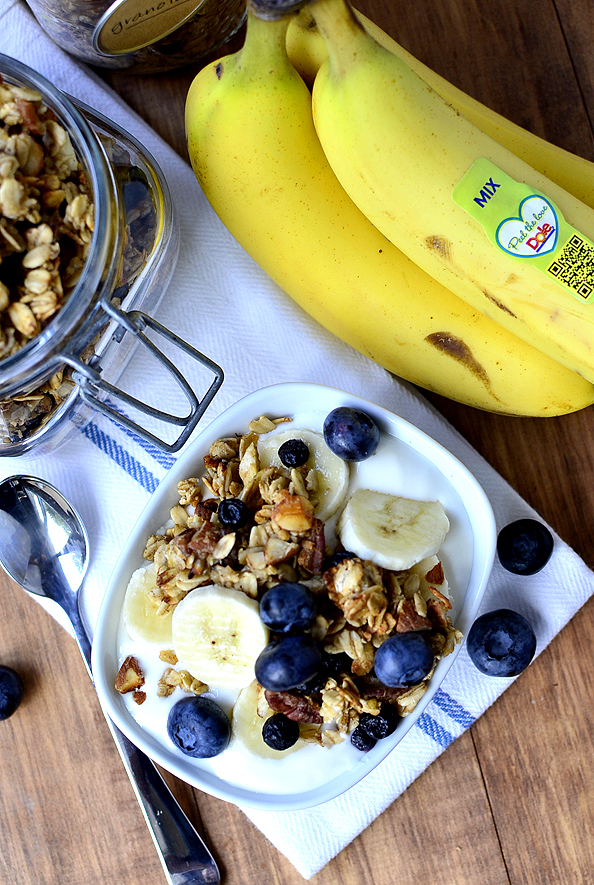 The banana bread taste in this granola was top notch. I do love me some dried fruit in my granola thought so I threw in a handful of dried, unsweetened blueberries to amp up the flavor even more. I love eating this right out of my paw, but when sprinkled over vanilla Greek yogurt and joined with fresh bananas and blueberries (which I clearly can’t. get. enough. of,) it’s just insane. 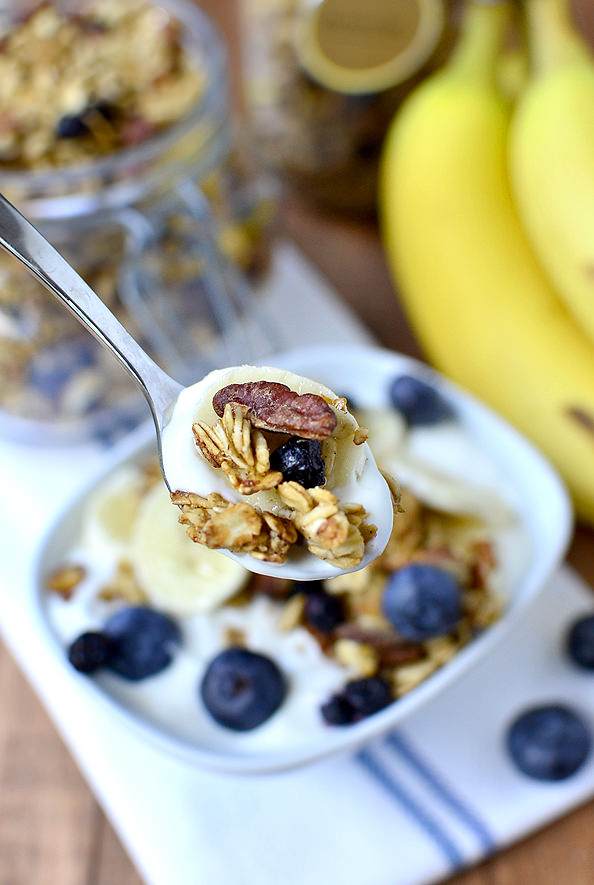 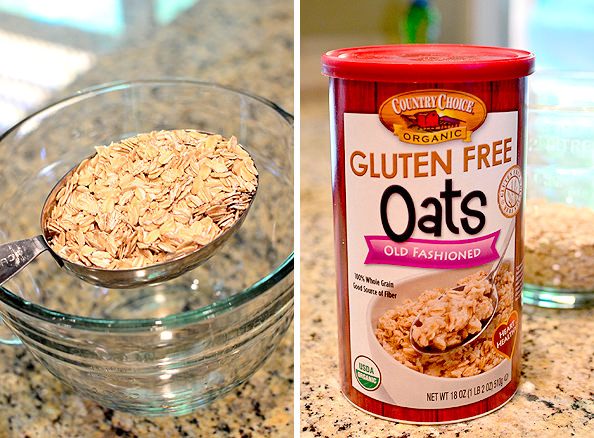 Next add 1/2 cup each almonds that have been roughly chopped, and pecan halves and pieces. You could use whatever nuts you like, really, or even seeds. Walnuts are traditional in banana bead but I like the crunch of almonds in my granola, and the butteriness of pecans.

Next add 1/2 teaspoon each salt and cinnamon then stir everything up. Got to have cinnamon in banana bread!

Set the dry ingredients aside then set your sights on a couple of bananas. Like I said, we always have fresh bananas in the house. For this recipe you’ll need 2 very ripe or “cheetah spotted” bananas. The ones in the photo below are great for casual enjoyment (!) but are a little too perfect for this granola. You want ’em real soft and spotted. 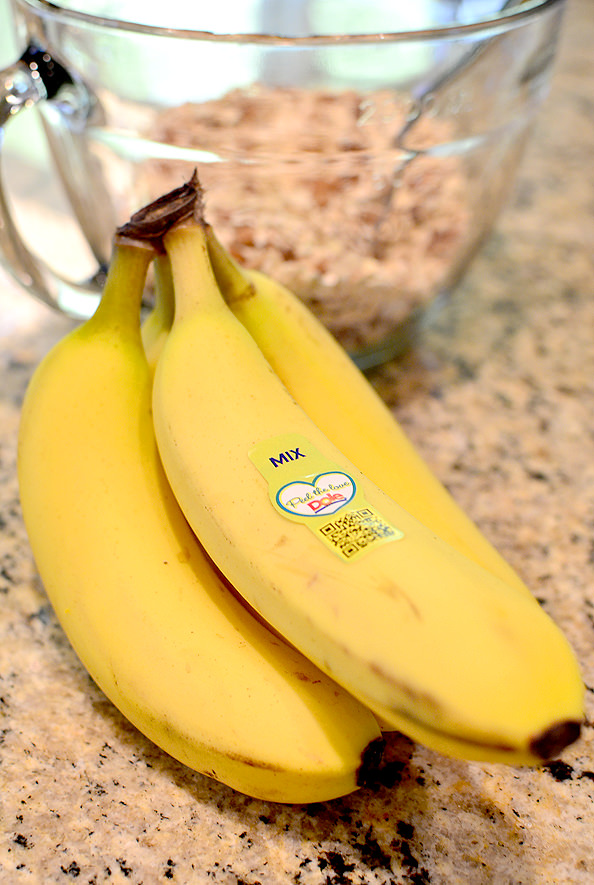 Peel then mash the bananas in a medium-sized bowl until they’re very smooth and liquidy. 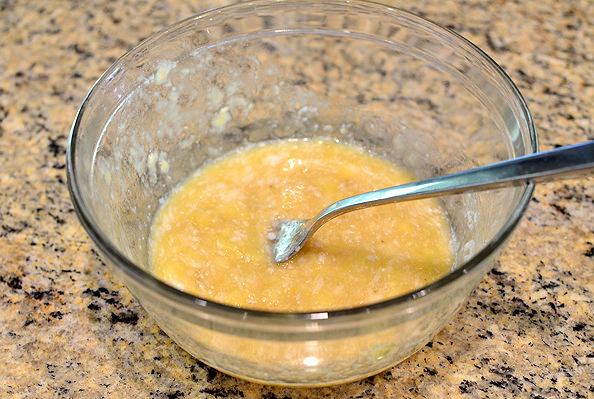 Next add 1/4 cup each maple syrup and coconut oil, as well as 2 teaspoons vanilla. Stir until combined then pour onto the dry mixture and mix well. 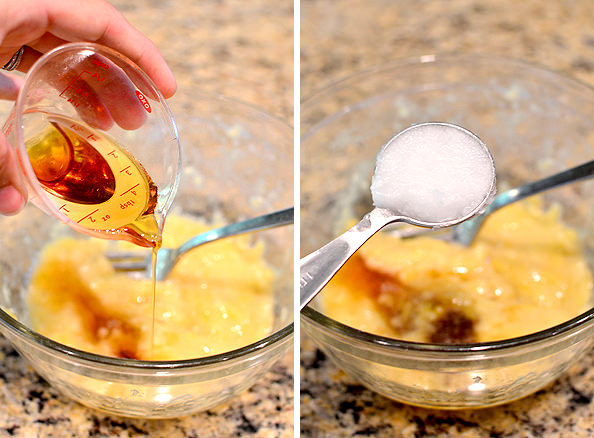 Spread the granola out on a silpat-lined baking sheet (here’s the one I have >>) then bake at 350 degrees for 15-20 minutes or until golden brown, stirring twice. FYI, the granola will be soft when hot and crisp as it cools. That said, this granola has a lovely crisp yet “muffin-like” texture when it’s completely cool. Definitely banana bread inspired! 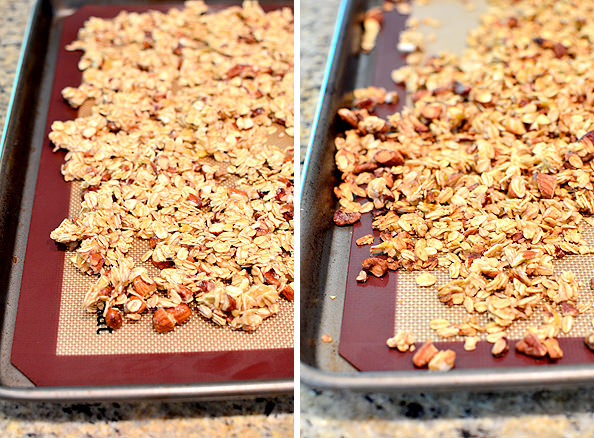 Transfer the cooled granola to a bowl then stir in 1/2 cup dried unsweetened blueberries. 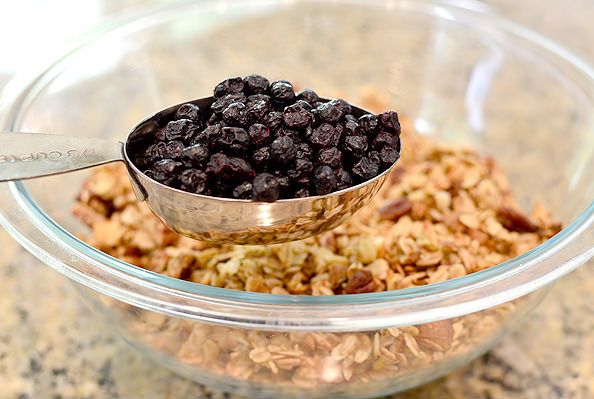 Enjoy straight away or transfer to an airtight container to store on the counter for 3-4 days. What a lovely gift this fun and flavorful granola would make! 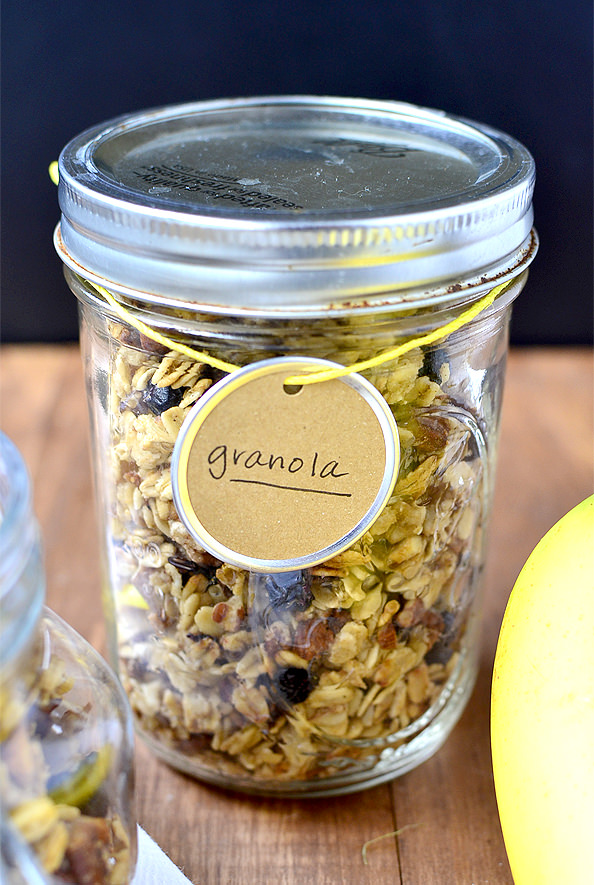 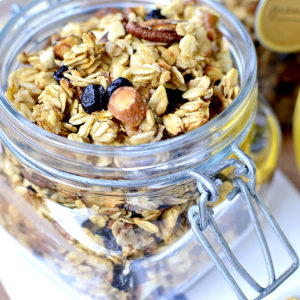 Blueberry Banana Bread Granola is a lightly-sweetened, gluten-free granola that has the unmistakable taste of banana bread. It’s quick and easy, too! 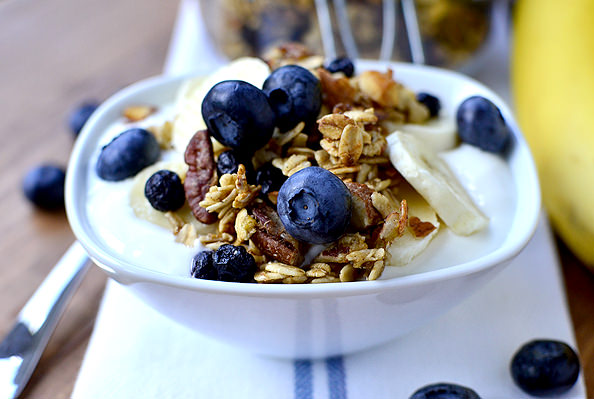 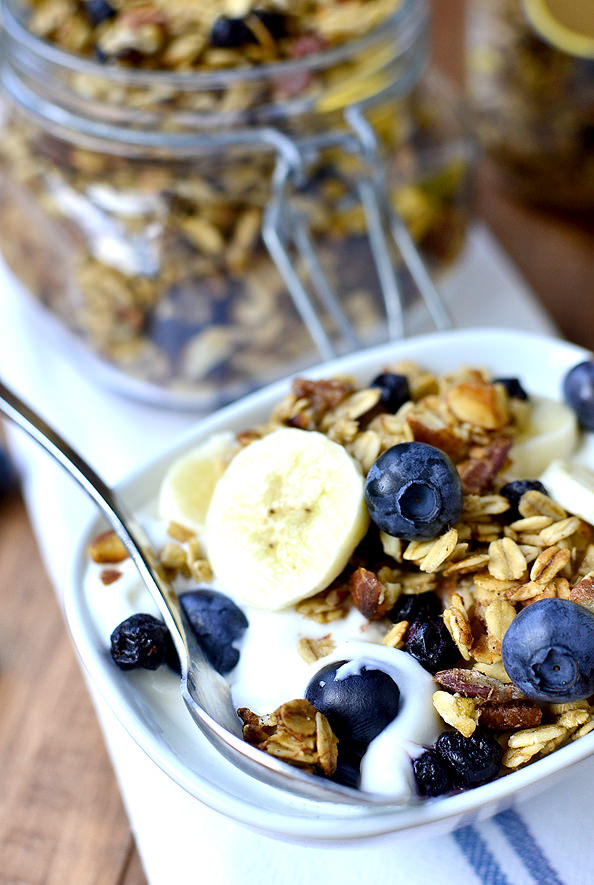