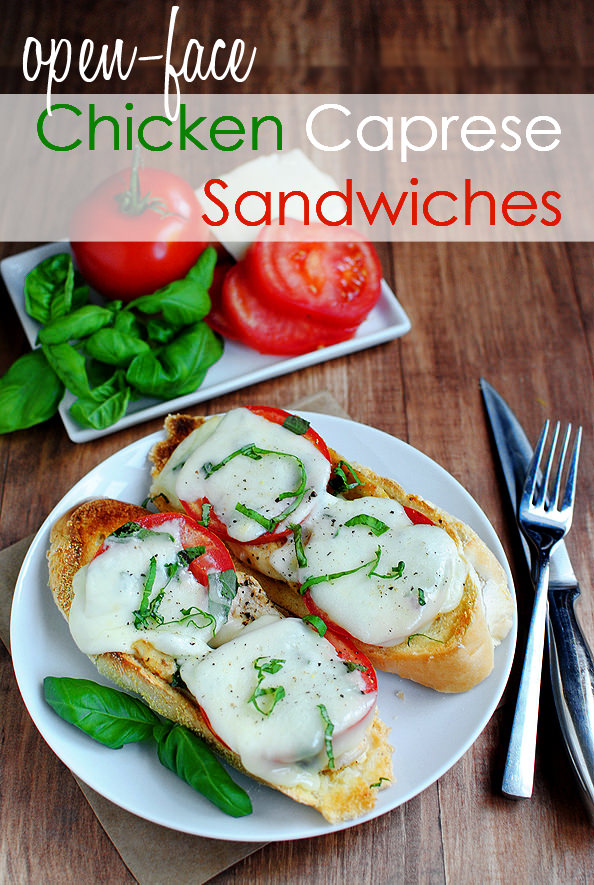 I don’t know about you, but Wednesday nights were one of the busiest nights of the week at my house when I was growing up.

Between church youth group, dance, and DJ’ing (yeeeah, my older brother was a DJ at our high school’s onsite radio station – bahaha! Oh dear God, so was I. Definitely repressed that memory until just now.) my brothers and I had to be fed and out the door by 5:30pm at the latest every Wednesday night.

As such, dinners that evening were usually super quick and easy. No time to waste when the Lord (or Alanis Morisette circa 1997) was calling! I can recall many a Sloppy Joe, Chicken Salad, or Pasta Bake being served on those hectic nights, when time was of the essence.

These days, it’s much of the same. Regrettably, all the crap Ben and I tell ourselves we’ll do Monday or Tuesday usually gets put off until Wednesday – as neither of us want to do anything on Thirsty Thursday or Friday Funday – and as soon as we’re done working and eating dinner, we’re out the door running errands, cleaning the house, and, in general, being responsible adults.

For those of you in a similar situation, try whipping up Open Face Chicken Caprese Sandwiches for a quick and easy dinner on a hectic Wednesday (or any weekday) night. They’re incredibly delicious, filling, and, best of all, ready in just 15 minutes.

Plus they’re covered in melted cheese! 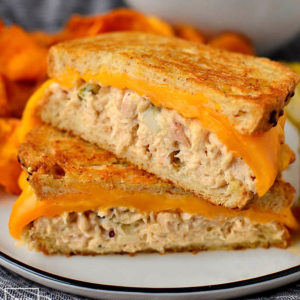 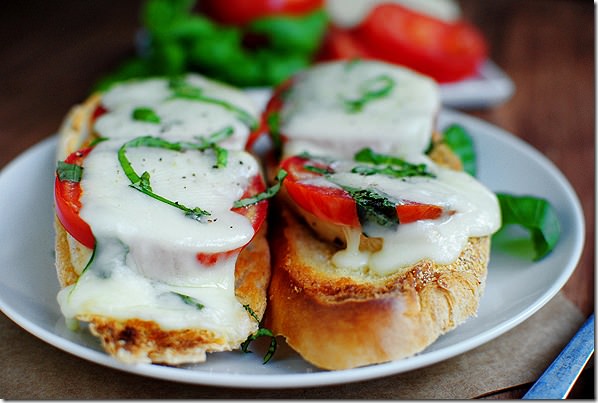 I am a sucker for caprese anything, and I love how the addition of sauteed chicken in these sandwiches gives the classic caprese combo of tomato, basil, and cheese a filling and satisfying oomph. 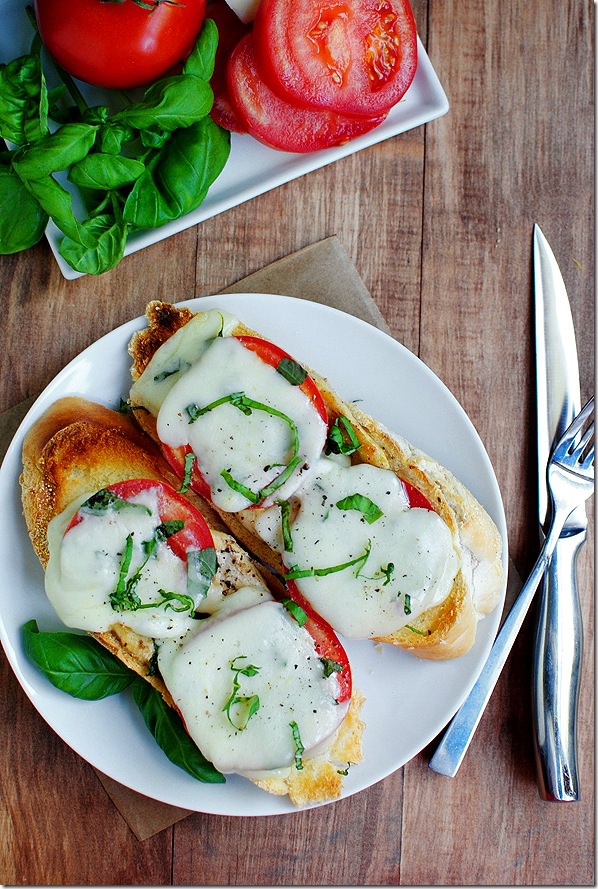 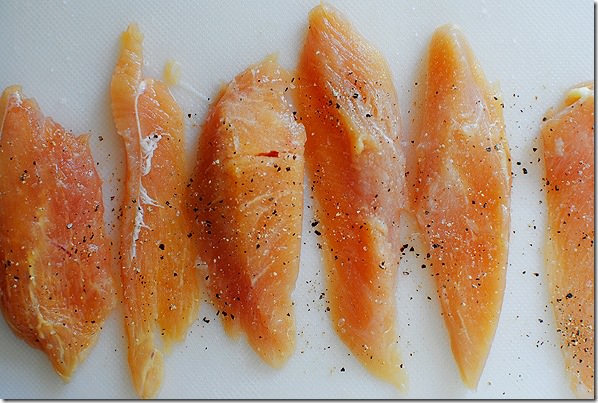 Saute the strips on a non-stick sprayed skillet over medium-high heat for about 3-4 minutes a side, or until the chicken is no longer pink in the center. 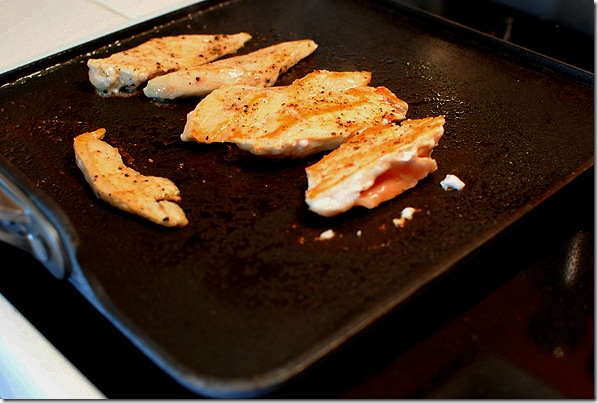 Remove the chicken to a plate and set it aside. 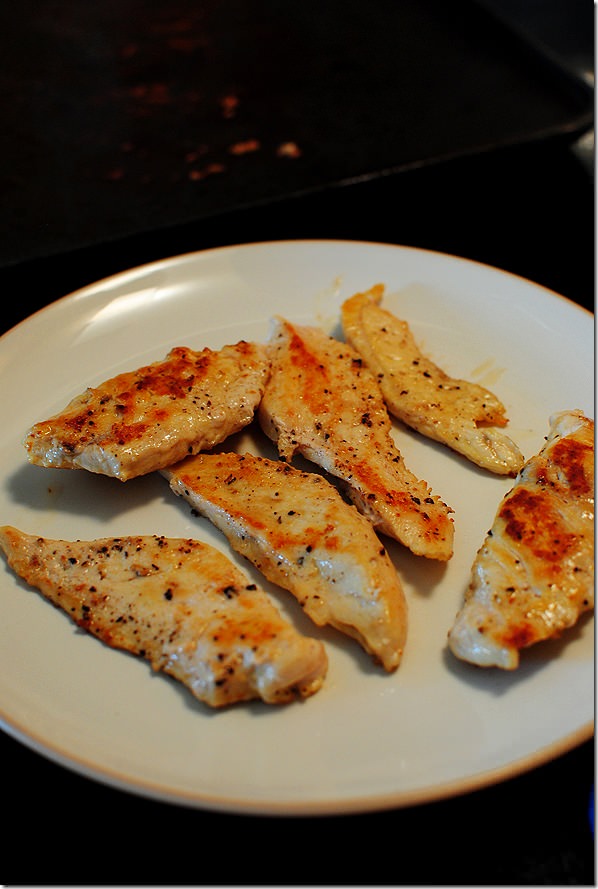 Meanwhile, slice up some bread for the base of the sandwich. You want something hearty like a crusty baguette or loaf of French bread, which is what I used. 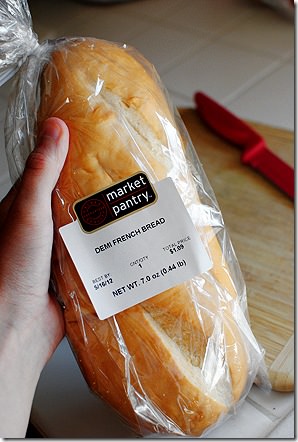 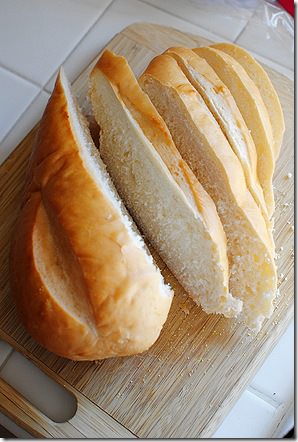 Slice the bread at an angle, then lightly butter 2 slices per person, and toast them under the broiler until they’re just barely golden brown along the edges. 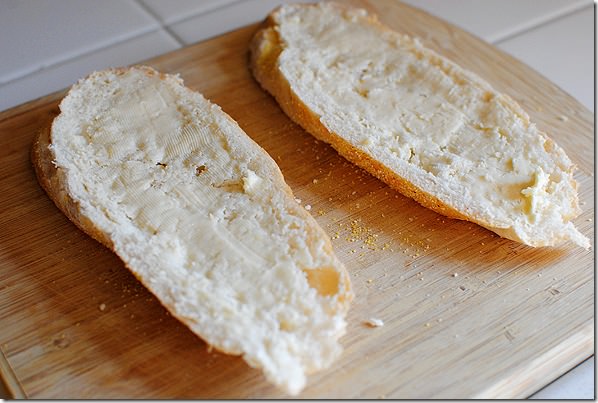 While the bread’s toasting, slice up a couple of juicy tomatoes. 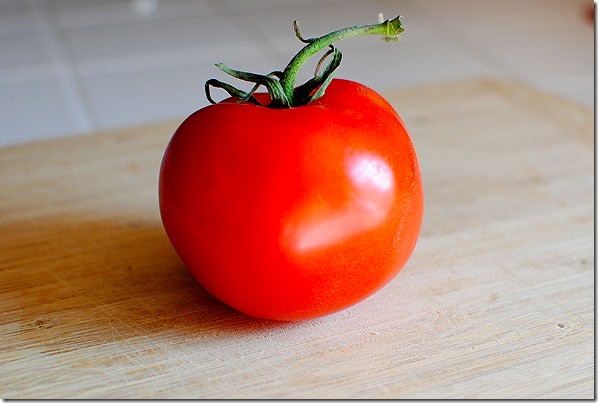 I used vine-ripened tomatoes, but you could use roma, beefsteak – or really anything you’ve got on hand. Next, slice up the cheese. 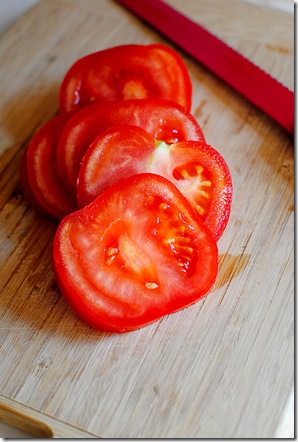 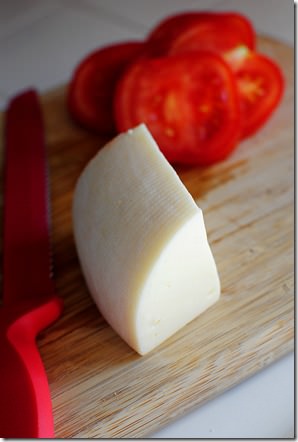 Now, mozzarella is what’s usually used in caprese salads, etc, but I had fontina on hand which is mild in flavor like mozz, plus I love how it melts. Feel free to use either! Slice as thin or as thick as you like, too. 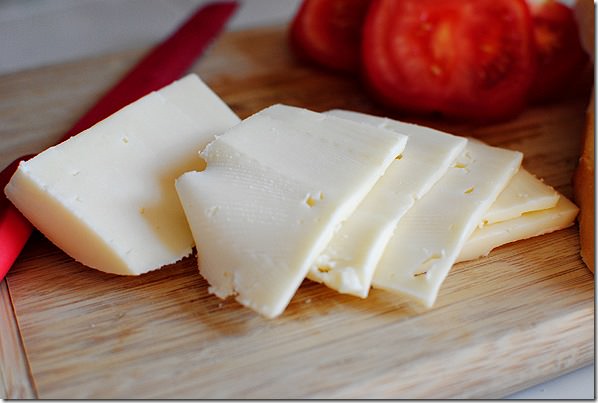 Once the bread is toasted, layer on the sauteed chicken and tomato slices. 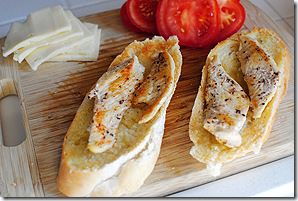 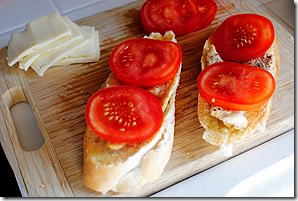 Then top with torn fresh basil, and finish with the cheese. 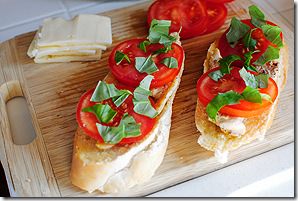 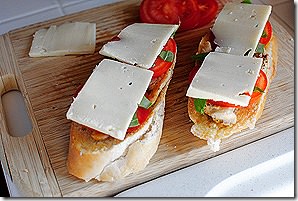 Pop the pieces back under the broiler until the cheese melts and the fillings are warm, then crack some black pepper on top. 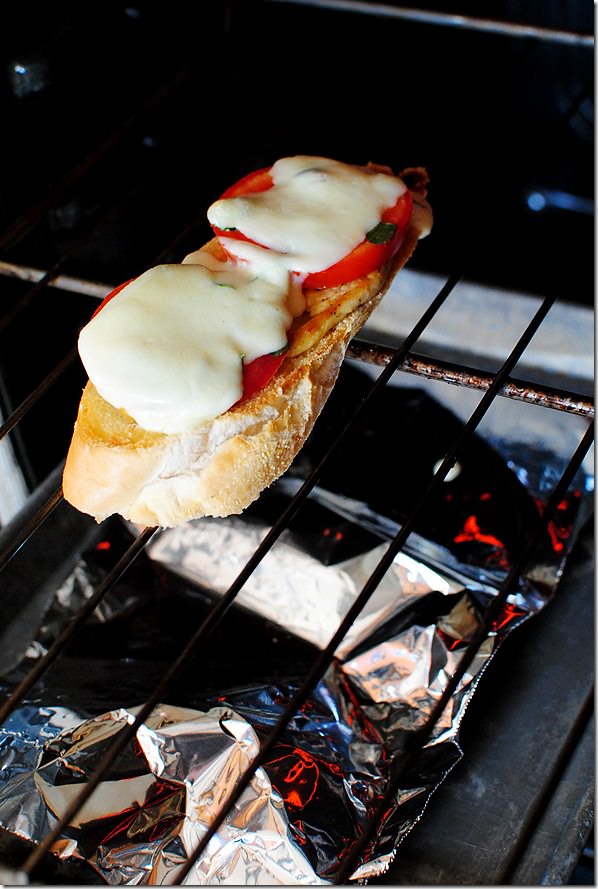 Check your watch, ’cause that’s it! 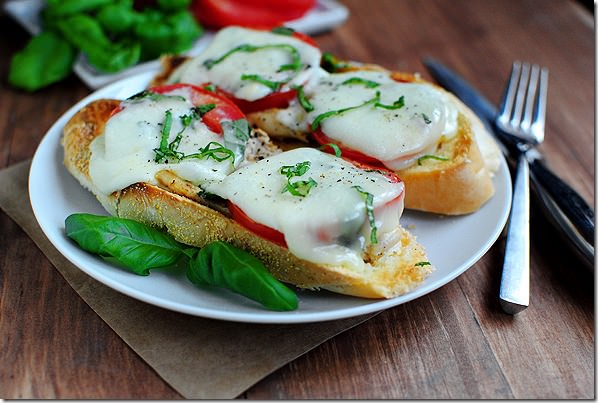 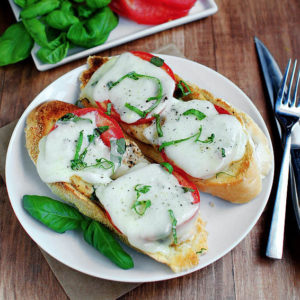 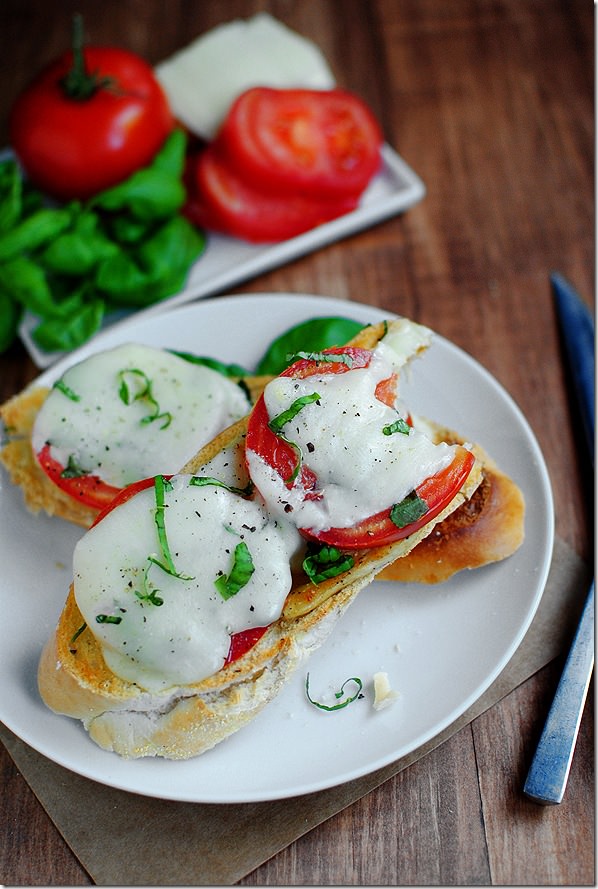