Bacon, Leek and Mushroom Risotto is a light and easy supper or side dish to serve any night of the week. 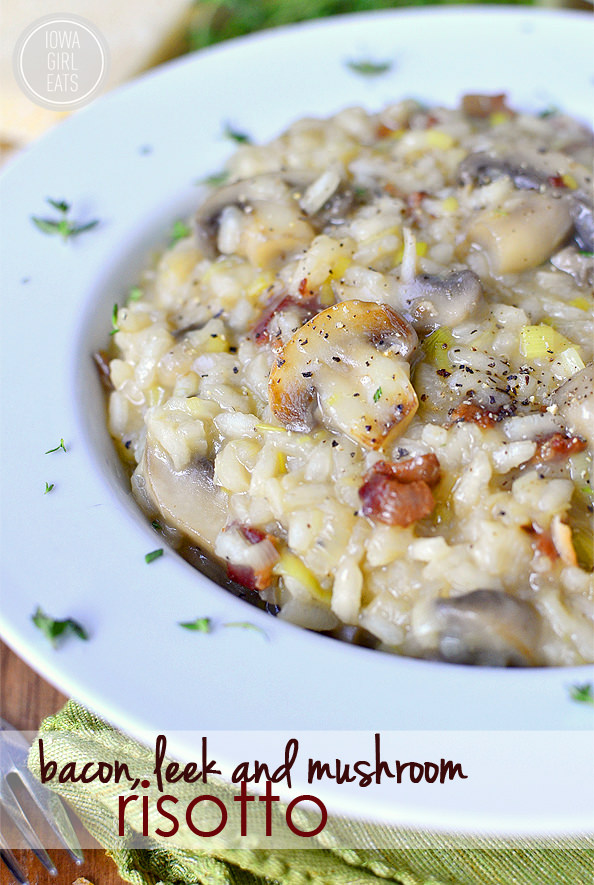 Howdy all, I hope you had a nice weekend!

Ben and I spent much of the past couple of days sequestered indoors – wah-wah. Lincoln came down with a nasty cold last last week that Ben and I both woke up with on Saturday morning. I think between the three of us we sneezed at least 1,000 times this weekend! The colds traveled to our heads then throats, yadda, yadda, yadda – needless to say we didn’t do much besides catch up with our DVR (hell-o Bachelor in Paradise!) and eat comfort food.

Gluten free mac and cheese helped (have you tried Trader Joe’s brand? So good!) Especially leaning over the cooking noodles with a towel over my head to trap the steam like they do in the movies. It actually worked…for a minute. Bourbon Infused Sea Salt Caramels from my friends at Cellar Door Chocolates (honestly the best treat ever,) definitely took care of the grrr, I have a cold in the summer internal struggle, and Bacon, Leek and Mushroom Risotto helped warm my soul! 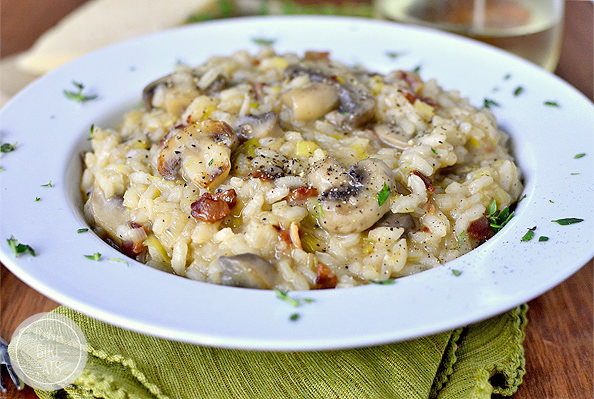 Forget chicken soup, Bacon, Leek and Mushroom Risotto is officially what I’m requesting every time I get sick from here on out. This flavor-packed risotto is super elegant but easy enough to make even if you’re under the weather.

Arborio rice is slow cooked with bacon, leeks, and mushrooms (which I ate around, of course,) in rich chicken broth then flavored with parmesan cheese and fresh thyme. File this dish under “simple is best”. The smokey flavor of the bacon mixed with the mild yet bright leeks and thyme is ridiculously satisfying. Creamy, dreamy risotto. I can never get enough!

This was actually the second time I’ve ever cooked with leeks. Last week I was working on a freelance recipe for stuffing (STUFFING – as in for Thanksgiving. Ahh! I saw some Halloween candy out at the store the other day and died a little inside.) and decided to incorporate leeks into it. Best. Decision. Ever. The aromatic veggie has a mild green onion flavor that is utterly and insanely delicious. I’ve been wracking my brain for other recipes I could use it in and this was the first dish that popped in my mind. 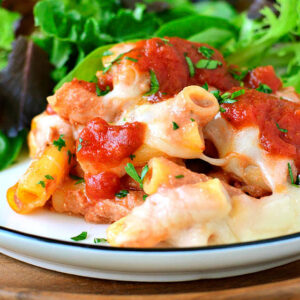 That is to say, prepare yourself for more leek recipes this fall and winter. My wheels are a-spinnin’!

Anyway, this risotto uses the short cut method of adding all the chicken broth at once vs cup by cup. I learned about it via a tweet from Tyler Florence who was live-tweeting risotto making last year. I know. Random. That said, I decided to give it a go on my Shortcut Butternut Squash and Sage Risotto last fall and it worked perfectly! I’ll never go back. And neither will you once you taste this decadent, savory, soul-satisfying Bacon, Leek and Mushroom Risotto! 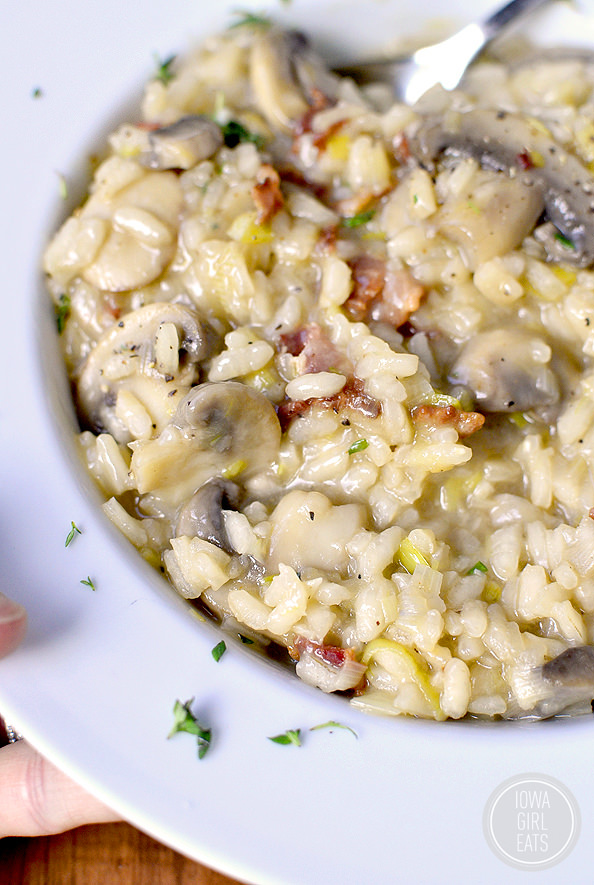 Start by crisping 4 slices chopped bacon in a large skillet over medium-high heat. Remove to a plate to drain then remove all but 2 Tablespoons bacon grease from the skillet (if you have less than 2, add extra virgin olive oil.) 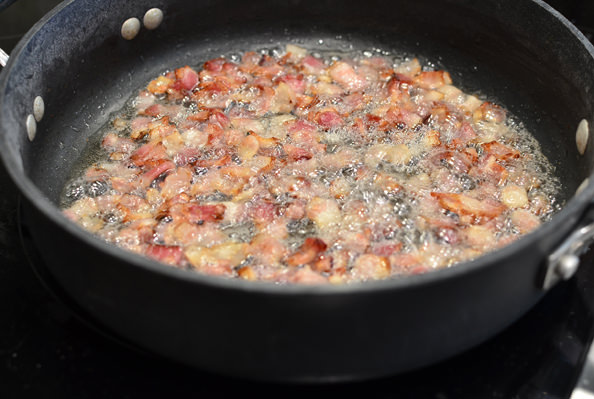 Meanwhile, prep your leeks. Like I said, I can’t believe it’s taken me so long to cook with leeks. They’re one of my new favorite aromatics! You’ll need 3 small or 2 large leeks for this recipe, just the white and light green parts. 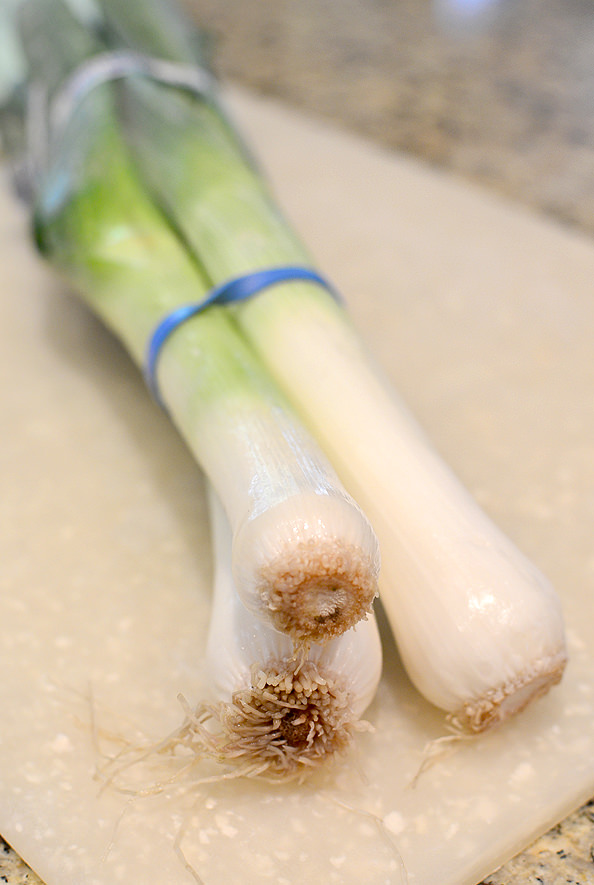 Once trimmed, slice the leeks in half then run under water if you see any dirt or debris stuck in between the layers. Next, slice! 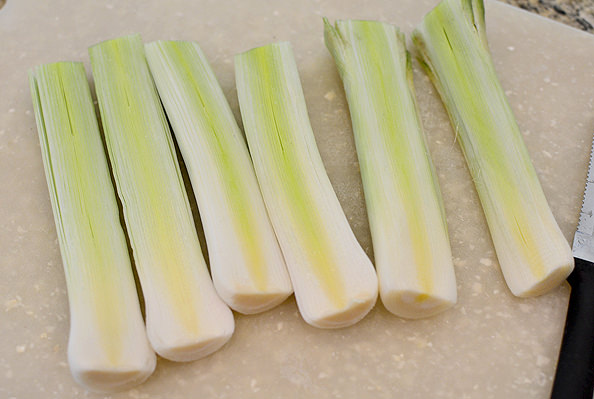 Add the sliced leeks to the hot skillet with 8oz sliced mushrooms and 1 large chopped shallot. Turn the heat up to medium-high, season with salt and pepper, then saute until the leeks are tender and mushrooms are starting to turn golden brown, 7-8 minutes. Finally, add 2 minced garlic cloves and saute for 1 minute. 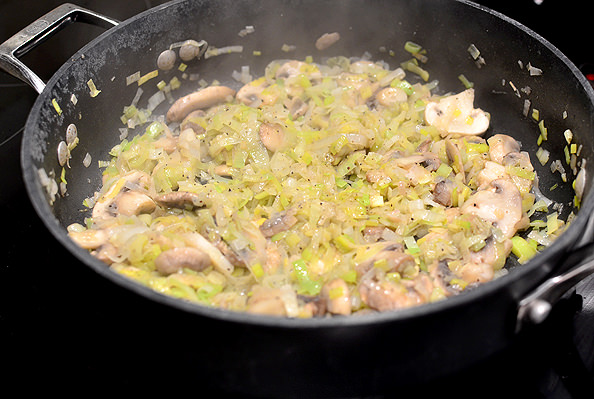 Time to add some rice! Add 1 cup arborio rice to the skillet then stir well to combine and cook for 1 more minute. Arborio rice is a short-grain rice, similar to sushi-style rice, and what makes it special is that it’s a high-starch rice which gives risotto a thick, creamy, and luxurious texture. 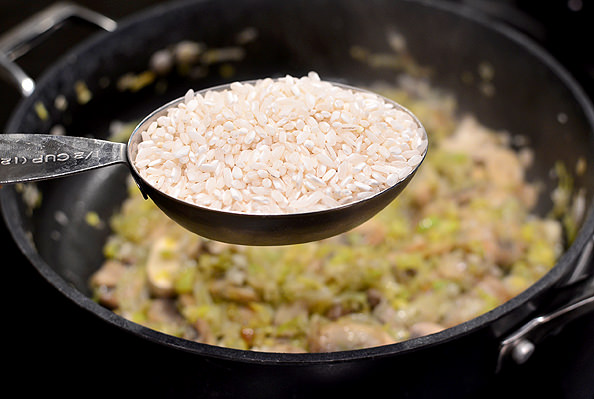 Turn the heat down to medium then add 1/4 cup dry white wine and stir until it’s been absorbed by the rice. I used pinot grigio – chardonnay would work too. Just don’t use anything sweet like a moscato or sweet riesling. 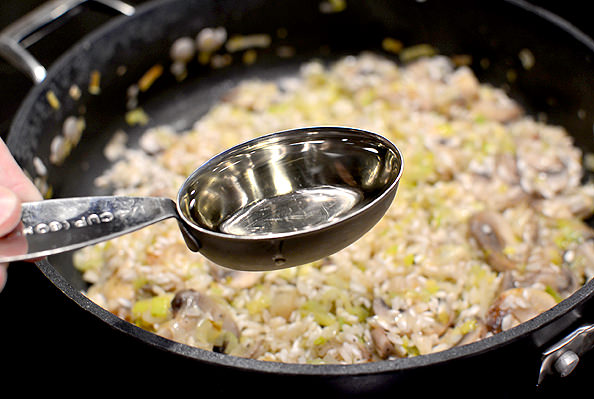 Next add 5 cups chicken broth that’s been brought to a boil in a saucepan next door. It’s very important to add hot chicken broth instead of cold or room temperature broth as to not slow the cooking process down.

Now, stir, stir, stir! That is to say, stir the risotto near constantly (if you have to step away to fill your wine glass, for instance, it’s not the end of the world. ;) ) until the rice is plump and tender, and nearly all the broth has been absorbed. This should take about 25 minutes. It goes quick, promise! 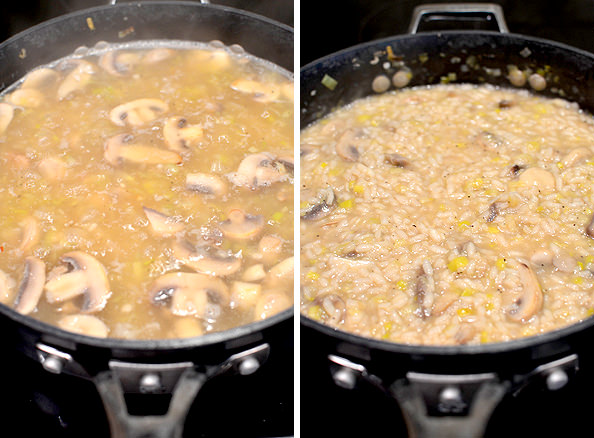 Finally, remove the skillet from the heat then stir in 1/4 cup freshly grated parmesan cheese, 1 Tablespoon fresh thyme that’s been chopped, and the cooked bacon. 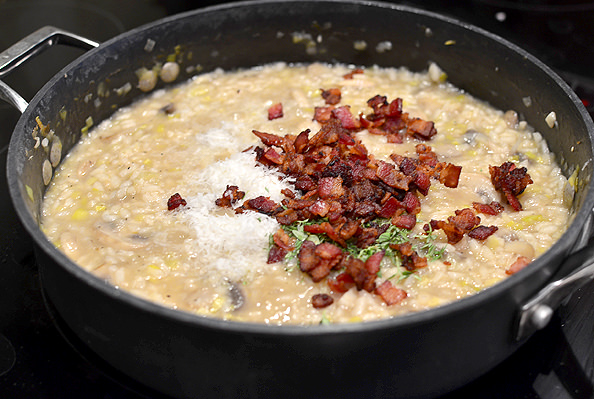 I think it’s really important to use freshly grated parmesan cheese vs pre-grated in my cooking, as it has a totally different flavor. I was recently able to help crack open a wheel of parmigiano reggiano at HyVee as part of the Join My Journey program and let me tell you, fresh PG is in my top 5 favorite foods ever. When it’s fresh is ridiculously creamy – I’m drooling at the memory!! 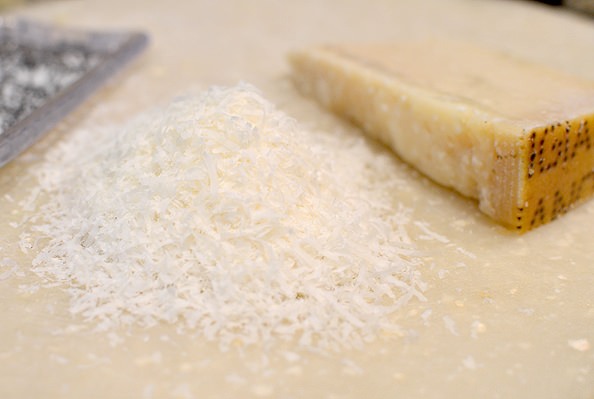 Anywho! Taste and adjust salt and pepper if necessary, then scoop into bowls and serve! 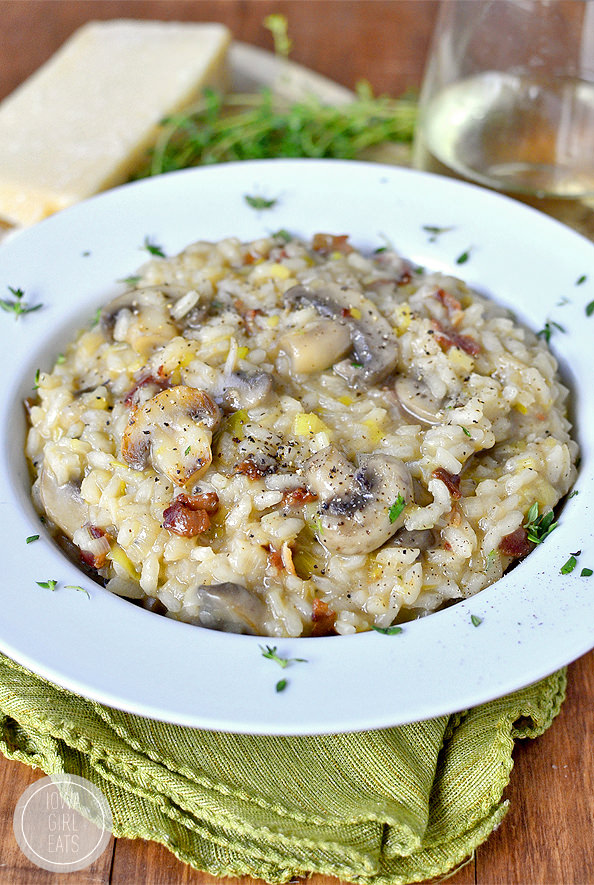 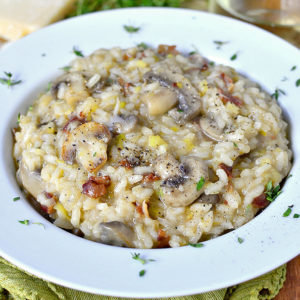 Bacon, Leek and Mushroom Risotto is a light and elegant, yet easy, supper or side dish to serve any night of the week. True comfort food! 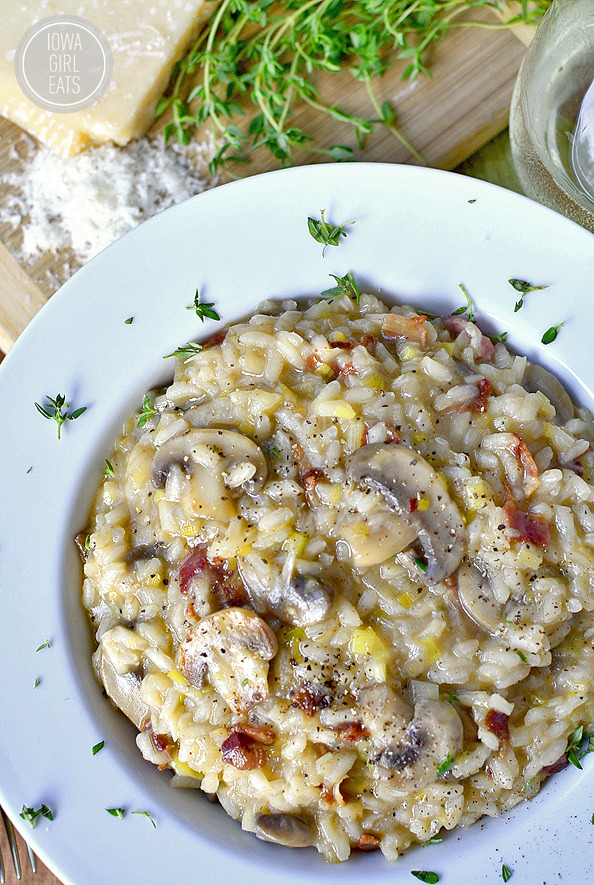 Risotto is like the grown up version of mac and cheese. I mean, how you gonna hate? It’s thick, creamy, and totally addicting. I know you’ll love this lovely combo! 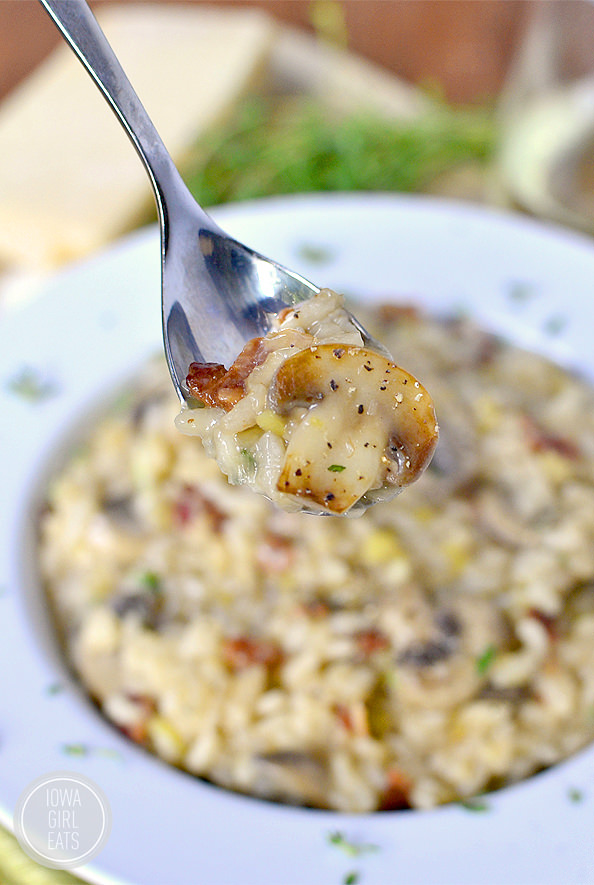