Shrimp Florentine Pasta is a fresh, fast, 20 minute meal. Elegant enough to entertain with, yet easy enough to make any night of the week. 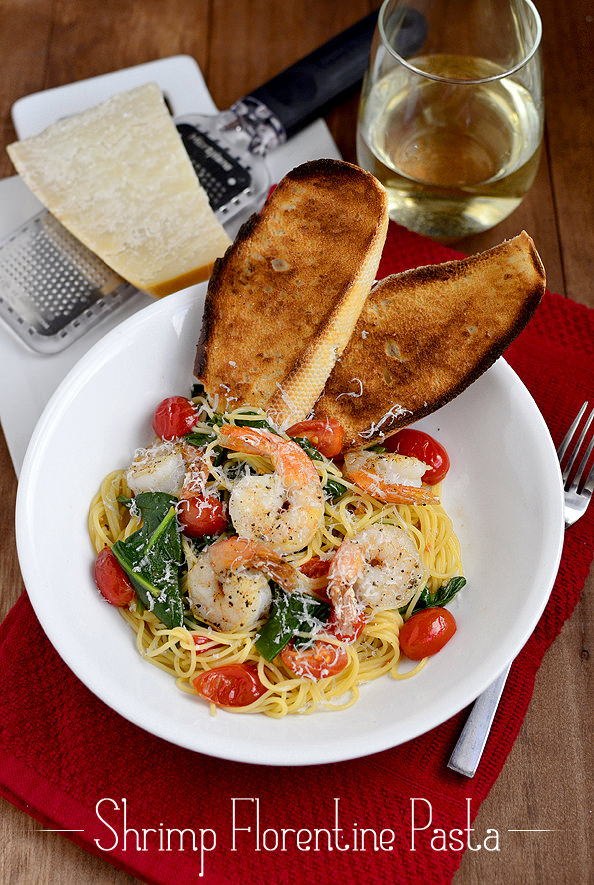 Man I love me some Saturday mornings!

Normally I sleep in ’til 8:30 or so then brew a cup of coffee, stir up a mango Chobani, and settle into the couch with some blankets to see what my friends on the quirky CBS morning show with Charles Osgood are up to. Then I remember the show airs on Sunday, not Saturday (seriously, every time) and I have to wait a whole extra day to watch the hilarity that is 80s graphics, stories about the origins of Thousand Island Dressing, and Mo Rocca trying to act like a legitimate reporter.

Mo, you’re not fooling anyone – that said, I can’t stop watching.

Anyway, it’s all for the best because The Pioneer Woman’s show comes on the Food Network at 9:00! I look forward to her show all week. Between looking after 4 (FOUR!) kids, a ranch, husband, slew of animals, one of the most popular blogs on the internet, and STILL finding time film a television show, I’d say Ree Dummond is just about as close to wonder woman as you can get. I sort of want her to be my life coach.

Besides all that, her recipes are always mouthwatering, simple, and total crowd-pleasers. With 6 mouths (and now the whole country!) to feed, they kind of have to be!

Last weekend she featured a 16 minute pasta recipe that I have been chomping at the bit to make. After changing it just slightly (the original recipe called for chicken, and after last week I needed a little break!) Shrimp Florentine Pasta is what I came up with. 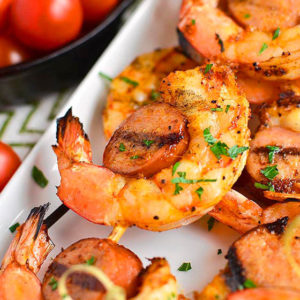 Jumbo-sized shrimp sauteed in garlic-infused olive oil top a swirl of wilted spinach, seared grape tomatoes, and angel hair pasta tossed in a garlicky, white wine sauce. It is just Heavenly, and perfect for Valentine’s Day! I know, I know, the whole garlic thing, but two garlic breaths totally cancel each other out, me thinks.

I mean, the whole dish comes together in 20 minutes, and it’s so elegant. Whether it’s for a special occasion or quick weeknight supper, I know you’ll love this dish! 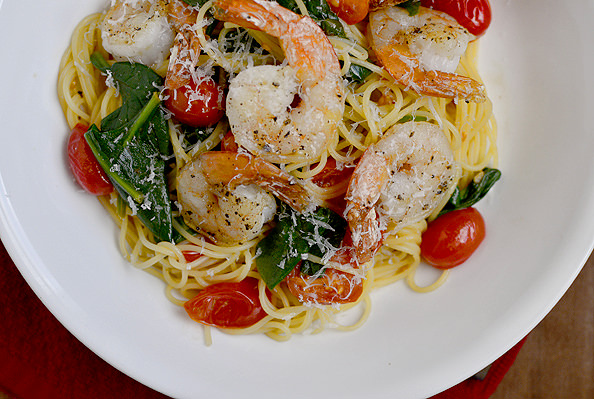 Start by infusing 2 Tablespoon extra virgin olive oil with 1 garlic clove. Heat the oil in a large skillet over medium-high heat (6.5 out of 10) then let the garlic clove toast until golden brown and remove. The remaining oil will taste like toasted gahhhlic, dahhhling, and is just CRAZY! 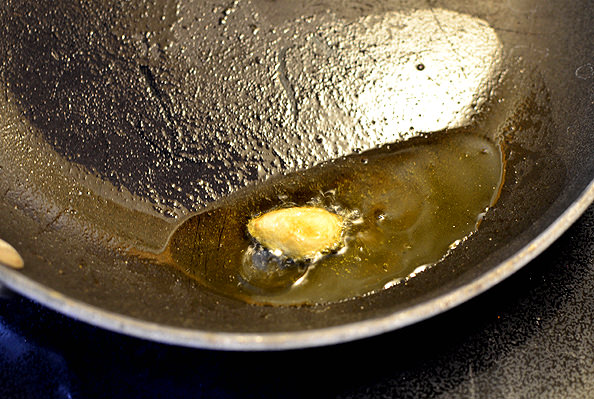 Meanwhile, pat 10 jumbo-sized shrimp that have been peeled and de-veined dry then season both sides with salt & pepper. FYI these photos all show 1/2 the recipe! 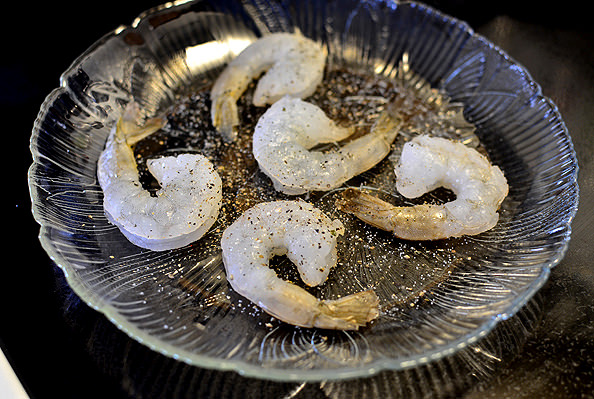 Saute the shrimp in the garlic-infused olive oil until pink and curled, about 2 minutes a side, then remove to a clean plate and set aside. Shrimp = done!

In the remaining oil, briefly saute 1 minced garlic clove until golden brown. This should only take 15-30 seconds or so. 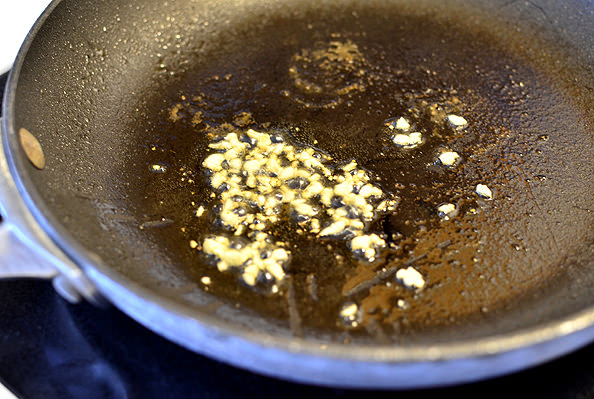 Then add the booze ‘n’ stuff! Ahem, that’d be 1/2 cup each chicken broth and white wine. I used pinot grigio, but any non-sweet white wine will work.

Stir to get the brown bits up from the bottom of the skillet then let cook and reduce by half, which will just take a few minutes. 4 at the most. 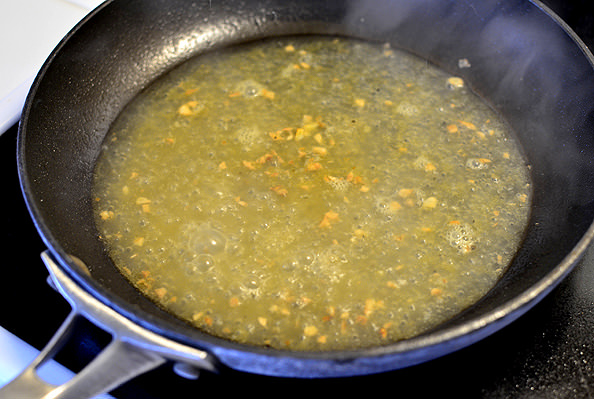 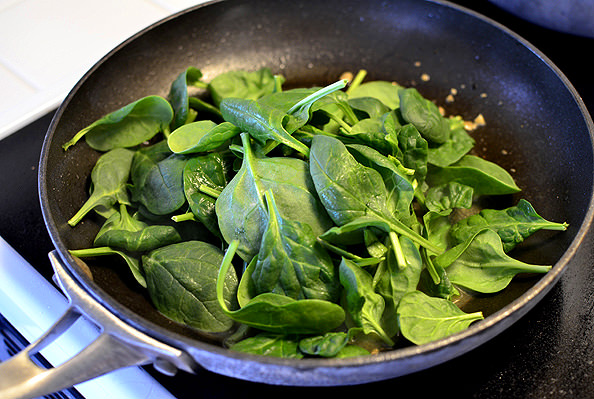 and 1 cup halved grape tomatoes. I got these organic grape tomatoes from Whole Foods these weekend – I am not kidding, they are sweeter than candy. CANDY! Mmmm…candy.

Let the spinach wilt and tomatoes warm through, about 2 minutes. 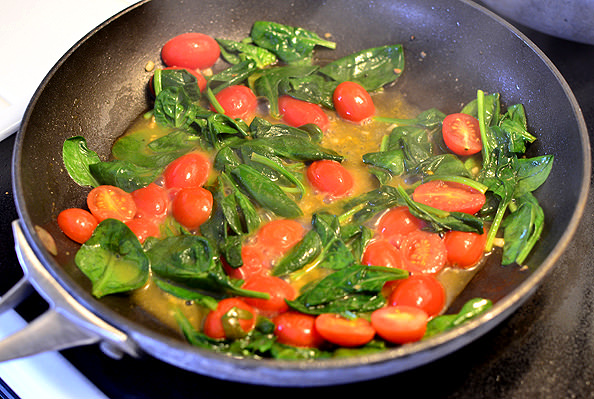 Next add 4oz cooked gluten-free angel hair pasta into the skillet (timing for cooking the pasta is included in the directions below) then toss everything together. 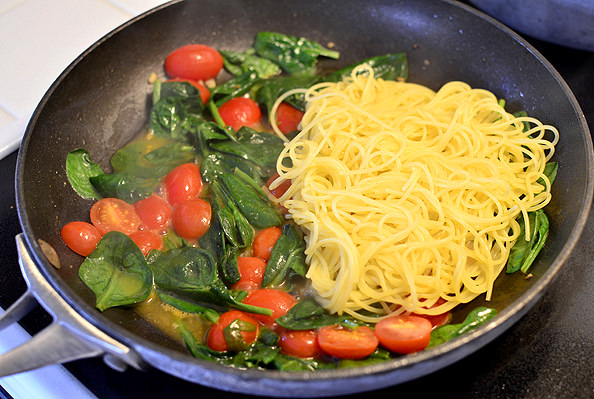 Top with freshly grated parmesan cheese, and garlic bread if you dare, then dig in! 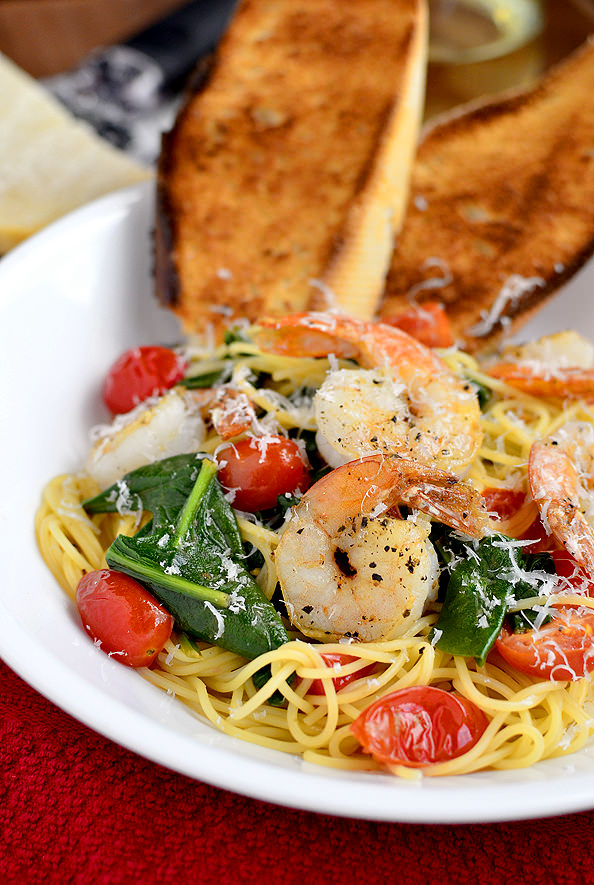 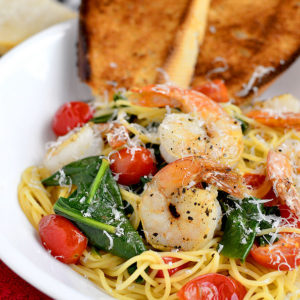 Shrimp Florentine Pasta is a fresh, fast, 20 minute meal. Elegant enough to entertain with, yet easy enough to make any night of the week.

Adapted from The Pioneer Woman 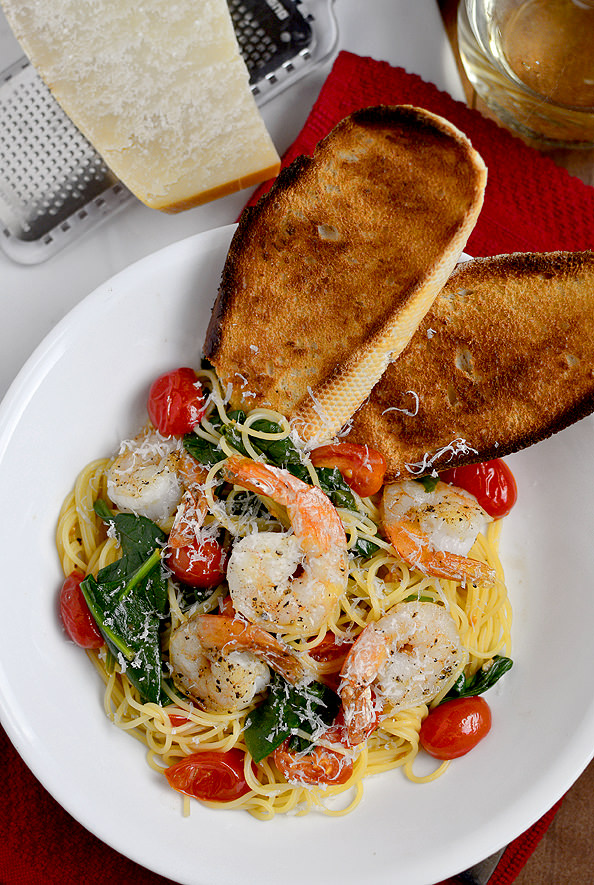 If you’ve never cooked with wine I strongly urge you to give it a go. It’s not as intimidating as you think (it’s actually not at all – you just add it!) All the alcohol cooks out, leaving a luxurious, deep flavor in the dish. So, so great and slurp-worthy! 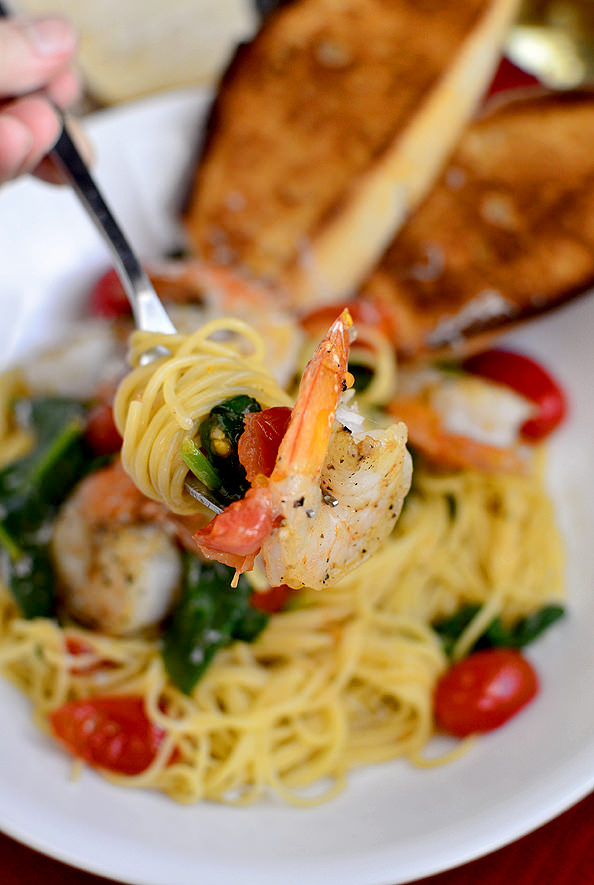