I’m just going to come right out with it – Curtis Stone made me stir fry while dancing in front of 500 people, then kissed my cheek. Twice. AHHHH!! 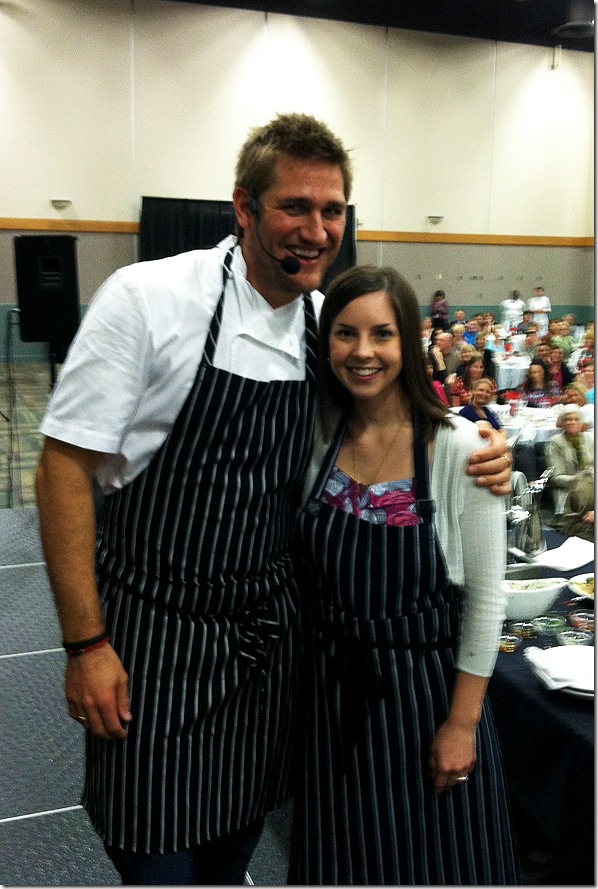 Ok, let me back up for a sec! As I mentioned, this Friday my Mom and I drove to Davenport to attend a luncheon to benefit Gilda’s Club, a national cancer support organization, featuring a cooking demonstration and Q&A session with hunky Australian celebrity chef Curtis Stone. 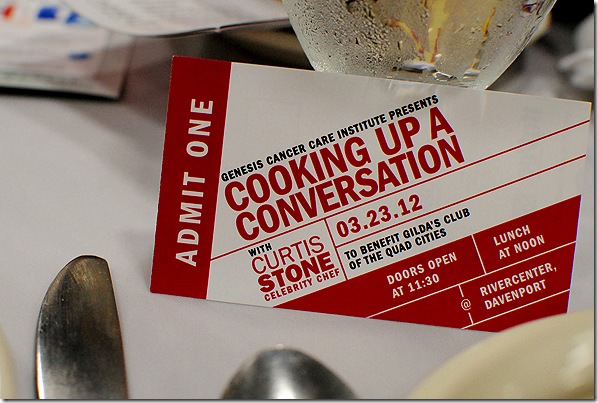 My friend John works for Panera, who partners with Gilda’s Club, and had tickets to the luncheon. Knowing that I wouldn’t want to miss the chance to see Curtis in person, he invited me and my Mom to join him. I owe him BIG time for this one! 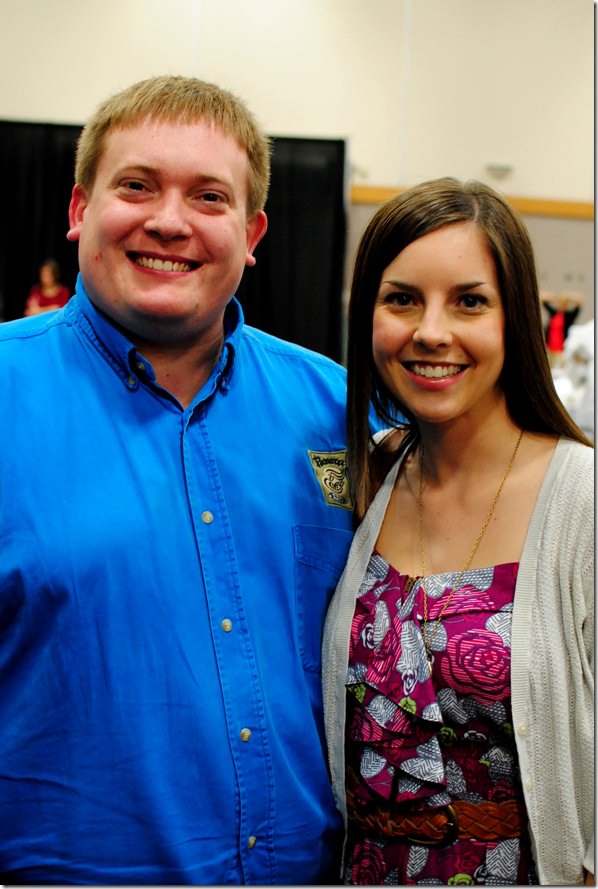 The luncheon took place at the beautiful Rivercenter in Davenport, and the menu was just delicious. We started with a side salad, 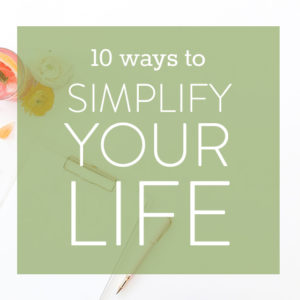 10 Ways to Simplify Your Life 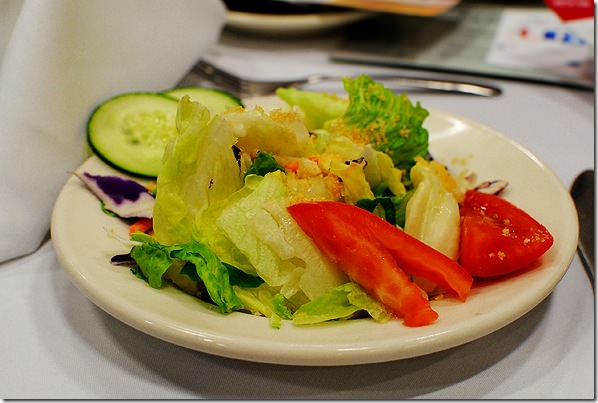 then devoured Apricot Ginger Chicken (desperate for the recipe!) and roasted potatoes. 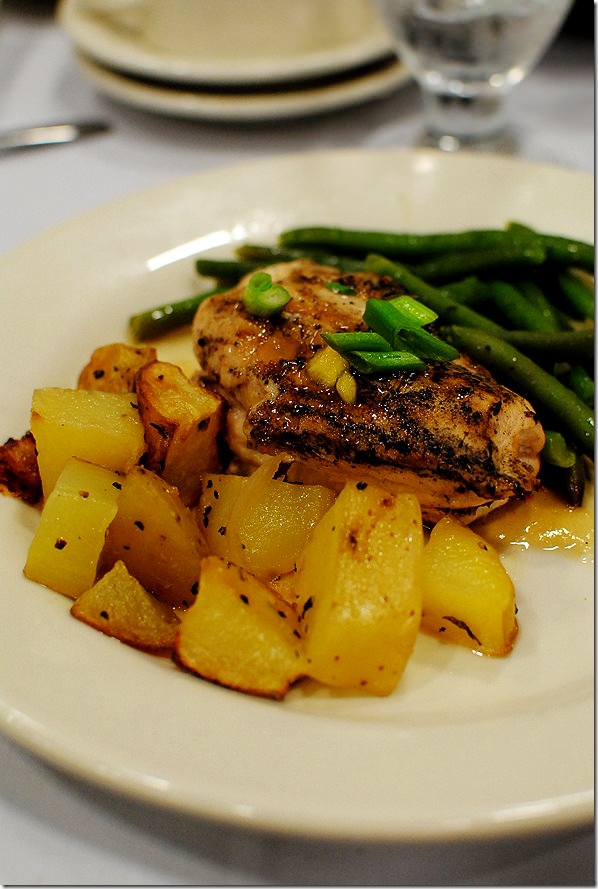 There was raspberry cheesecake and triple layer chocolate cake for dessert, that I wanted to plant my face into, but alas there are 14 more days of Lent! 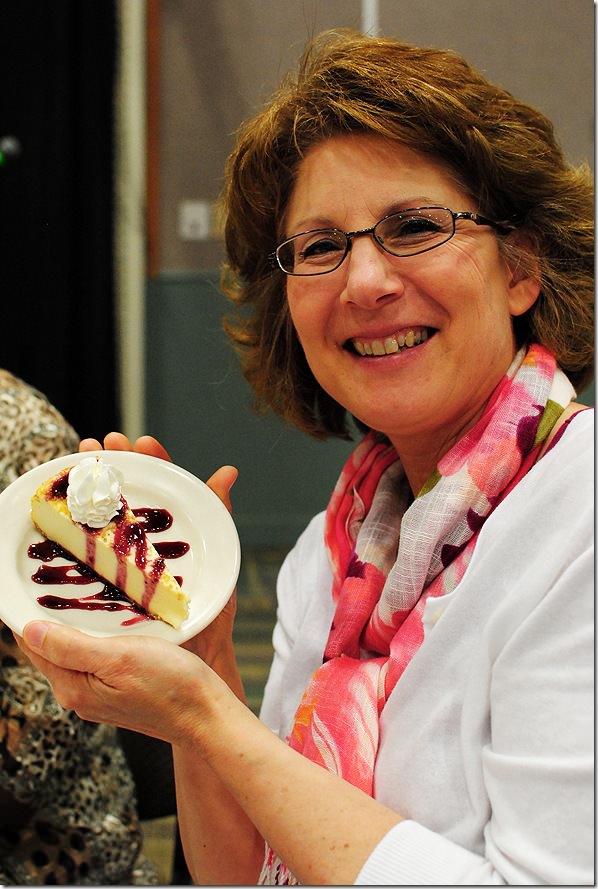 During lunch there were people walking around selling $20 raffle tickets for a chance to cook with Curtis during one of three live demos he’d start after we finished eating. My Mom and I dug into our purses, but realized we had both left our checkbooks in the car when switching to smaller purses for the event. Huge. Bummer. At least we were seated pretty close to the stage, so we’d just have to settle for staring at him from slightly afar.

After dessert had been eaten, and the coffee was poured, the main event got underway. Come on down, Curtis! :) 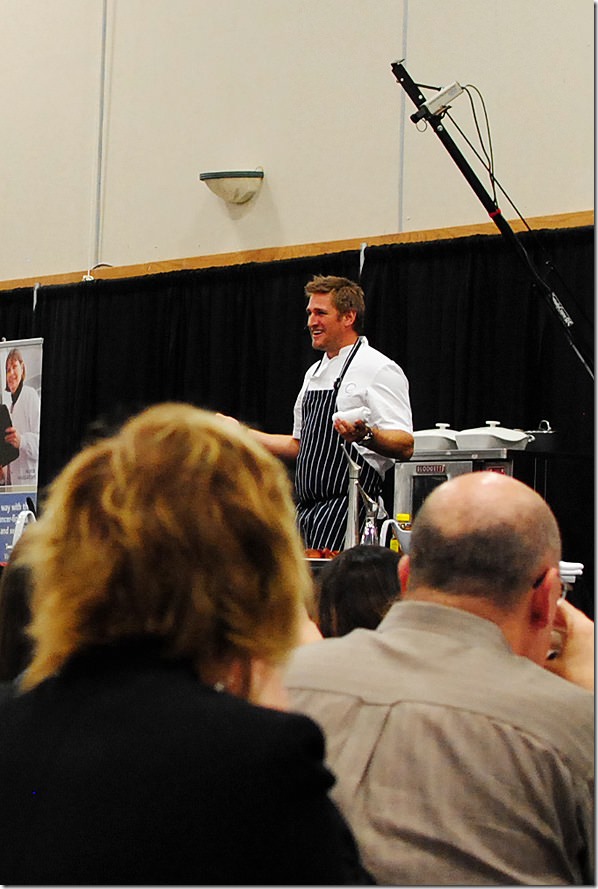 The crowd, which was no less than 500, and 99% women, went completely bananas as he jogged in from a side door and climbed up onto a wide stage in front of the room, stocked with a portable oven, cookware, dishes and tons of food. 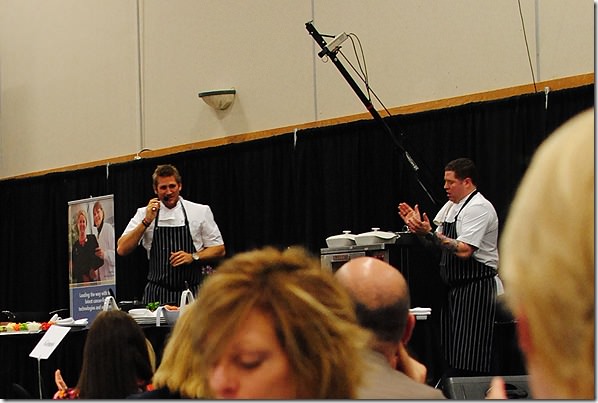 Now, I’m used to seeing Curtis’ life-sized cardboard cutout when I go grocery shopping at Hy-Vee every week, who he partners with, but holy buckets he is SO much more handsome in person, and absolutely oozing with charm and charisma. He had everyone giggling within seconds. ;) 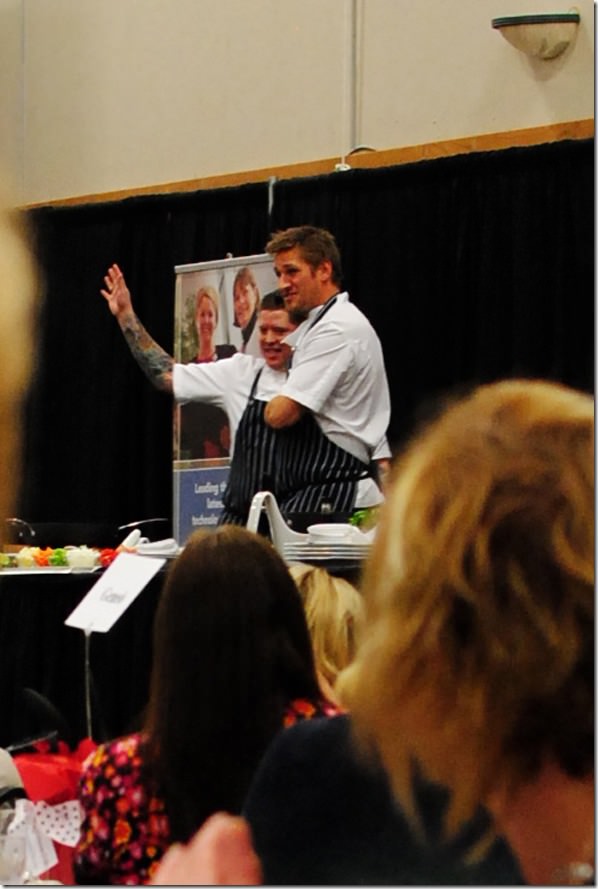 Curtis started the first cooking demo by reaching his hand into a bucket containing the names of people who purchased raffle tickets, and calling out two of them to come and join him on stage. 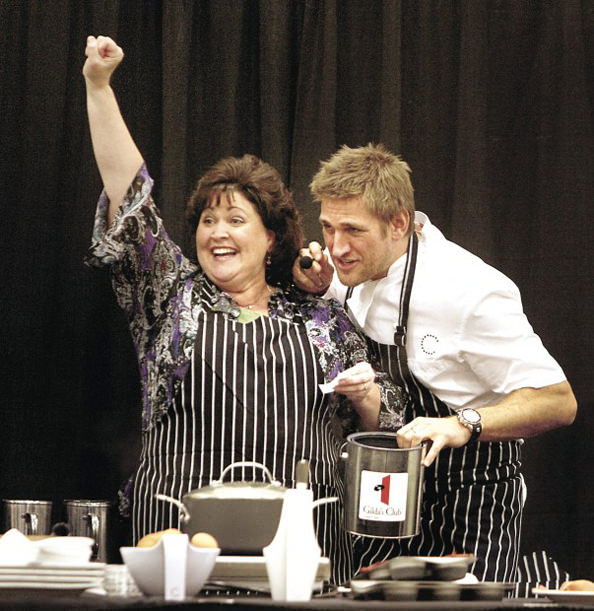 As two women shrieked with joy and made their way up, I turned to John and whispered,

“Good for Curtis Stone, you know? I can’t even imagine standing up there in front of 500 people and putting on a show like that. Getting up in front of a group is literally my biggest nightmare.”

“Really?” he answered back.

“Yes, really! I mean, maybe it’d be easier to go up in front of a large group instead of a small one because you wouldn’t have to make direct eye contact with anyo – no, wait, yeah it’s still my biggest nightmare. Never in a million years.” 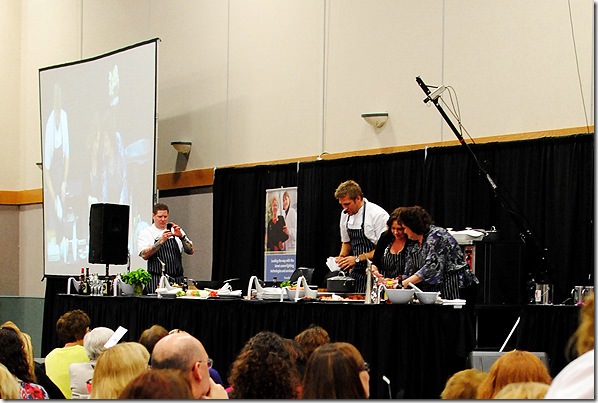 The first cooking demo wrapped up, and the giggling women left the stage with hearts a’flutter – their year, no doubt, completely made. 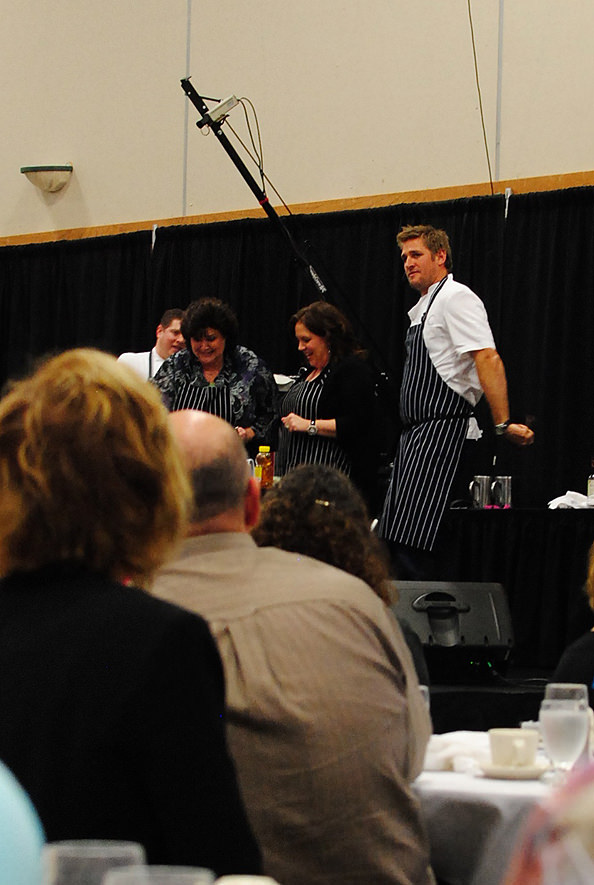 Next it was time for the second cooking demo to start. Curtis reached his hand into the bucket and pulled out a ticket, announcing the name in his thick Australian accent.

Kierstin Smeeth, (pretend my last name is Smith,) come on up!

Nobody got up and everyone looked around all, where the hell is this Kiersten Smeeth and why is she not sprinting up there to cook with this babe?!

Just then I feel my Mom poking my back. I turn around and she’s practically jumping out of her seat “It’s you! It’s you! I bought a raffle ticket!!!” 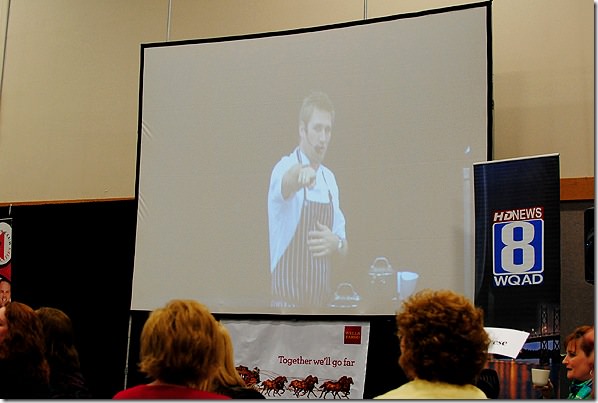 I honest to God could not recognize my name through Curtis’ accent, and for all I knew neither my Mom nor I purchased a ticket, so why would it be me anyways?! But it was. IT WAS!!!

In complete shock I got up and slowly made my way to the stage, cheeks already burning. I could not believe that I had just gotten done telling John what a train wreck I am in front of a group, and here I was about to do exactly that.

But Curtis was there. At the top of the steps leading onto the stage. Hand outstretched. I reached up to take his hand, and he drew me in for a hug then kissed me on the cheek. The crowd gasped.

Curtis Stone just kissed me on the cheek.

“Kierstin, is it?” he asks, his hand covering his mic.

He leads me to the center of the stage where the other woman who was called, Heidi, has already joined us, then begins to explain how the cooking demo will work.

I can barely move at this point. I’m thinking, OMG I’M STANDING NEXT TO CURTIS STONE AND HE JUST KISSED ME ON THE CHEEK AND HE SMELLS SO GOOD! (Yves St Laurent, someone asked!) but I’m shaking like a leaf from stage fright.

Just when I started to slightly calm down, Curtis declares, “Ladies! Today you are going to help me make a fresh and easy stir fry.” showing us a wide variety of ingredients laid out on the table in front of us. “Also, ladies, I just came out with a new mortar & pestle product. Do you know what a mortar & pestle is?”

We nod. Mimicking grinding motions in the air, grinning like idiots.

“Well, my mortar & pestle has a special name. It’s called the Bump & Grind, and you’re going to use it to make a special stir fry sauce!”

I spin to face Heidi, horrified. I think I know where this is going. 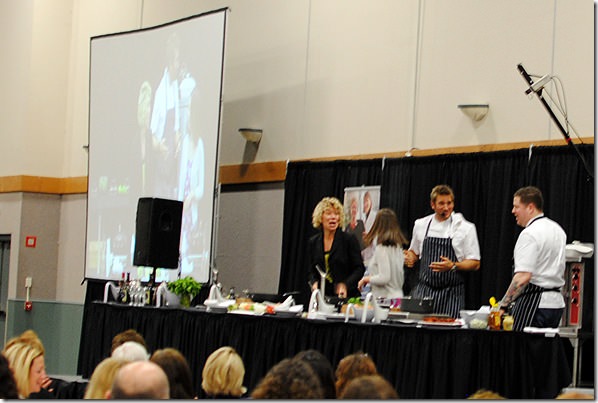 Then he said it.

“It’ll be a competition, and the audience will vote on who has the best bump & grind which will determine our winner!”

I pretty much panic at this point. Me, the ultimate introvert, dancing, nay – bumping & grinding – on stage to some Black Eyed Peas song, while sloshing soy sauce all over myself trying not to hurl on Curtis Stone. 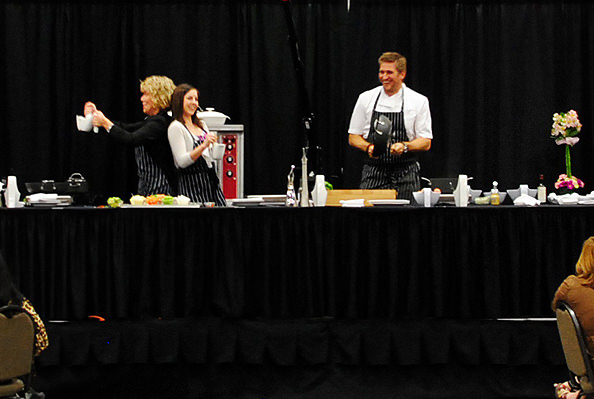 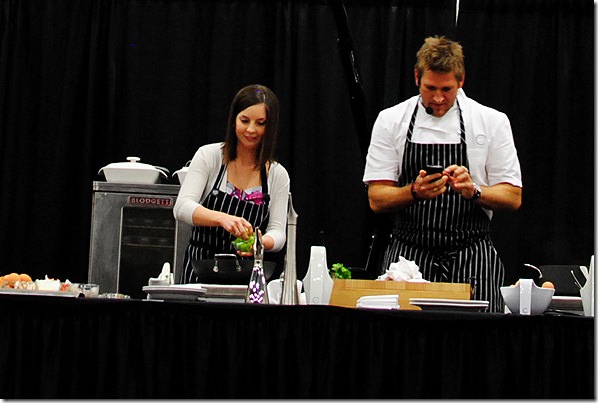 I briefly forget how unbelievably awkward I’m dancing when Curtis picks up my phone, which I had brought up to document the moment. 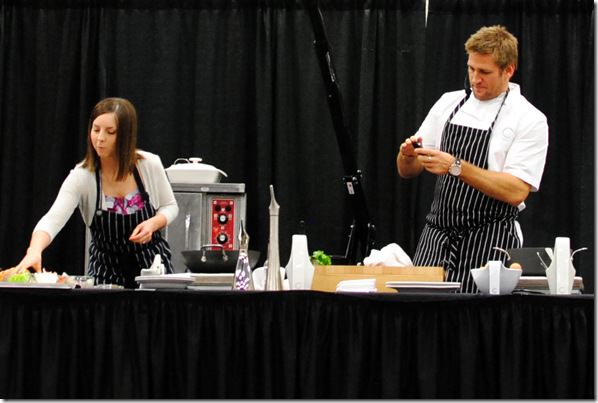 This is my favorite picture ever. 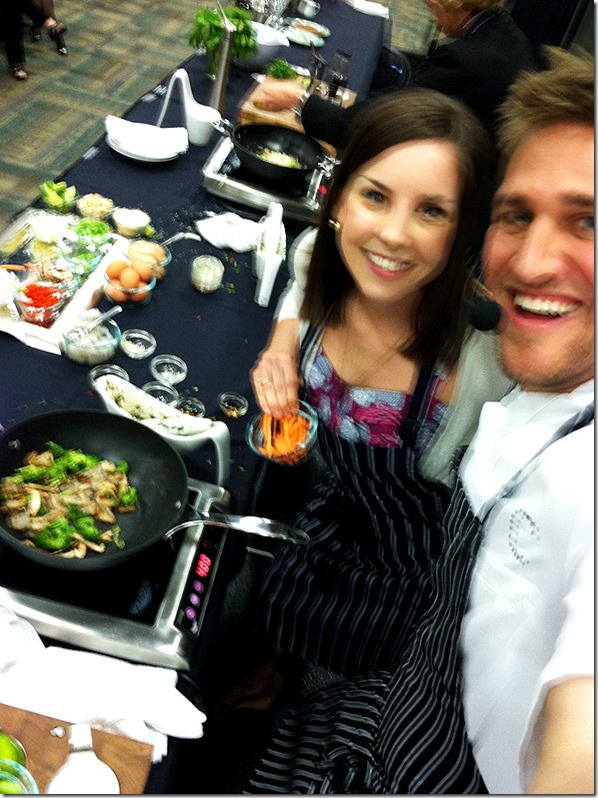 Approximately 47 terrifying minutes later (you try grinding in front of 500 people standing next to Curtis Stone and see how long it feels to you!) the song mercifully shut off. 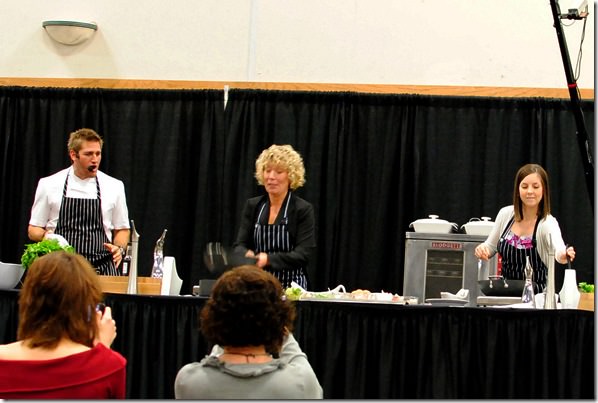 Tasting is next, and while Curtis and sous chef Steve deem my stir fry the best, the audience – wait for it – chooses Heidi as the bump & grind winner through cheers and applause. I contemplate making a run for it, leaving a Kristin-shaped hole in the wall of the Rivercenter. 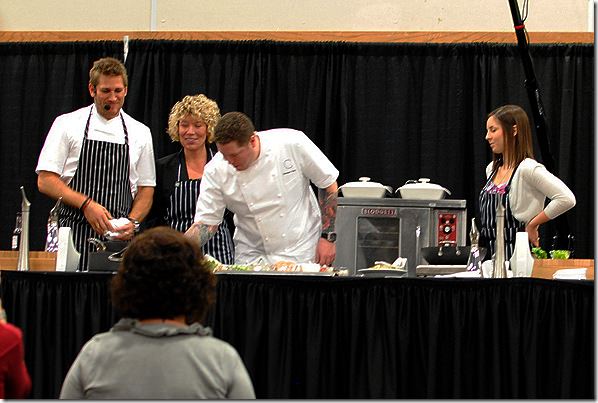 Instead I stay, get my picture taken with Curtis, then get another pity kiss on the cheek as I practically sprint down the stairs and away from the stage. Every mortifying minute worth it. BAHAHAHAHAHA – Curtis, freaking, Stone!

Emotionally scarring moments aside, Curtis is the nicest person, and such a gentleman. After the luncheon he stayed to sign autographs and take pictures with anyone who wanted one, with an unwavering smile on his face the entire time. He didn’t falter once. Each picture he took looked like the first picture – what a great guy! (And seriously, HUNK!) 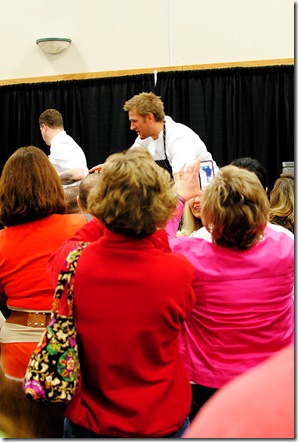 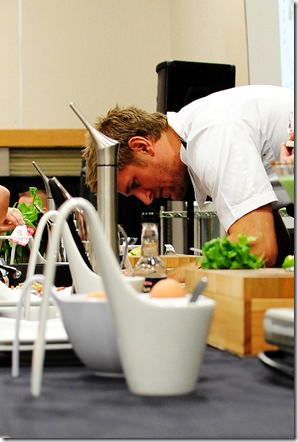 But my Mom – oh my Mom! She had excused herself during lunch for what I assumed was a bathroom break, but what she actually did was go and pay for a raffle ticket with her credit card. “I just wanted you to have a chance to cook with Curtis!” Angel. I nearly cried. 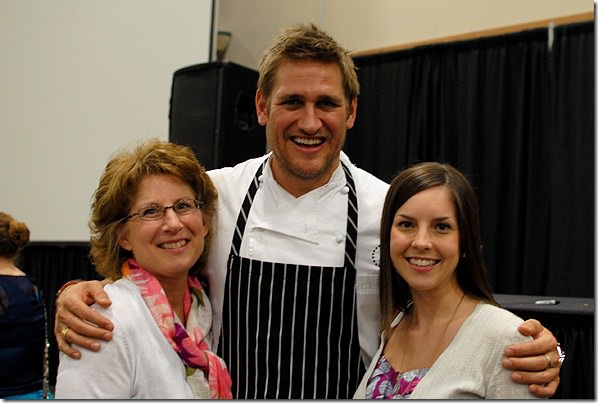 Well I think I’ve had just about enough fun for one weekend. Off to daydream… ;)

Have you ever met anyone famous? Did they live up to your expectations?

10 Essential Items I Always Keep in My Purse