Alternatively titled “THE ONLY CHICKEN RECIPE YOU WILL EVER NEED.”

Ahem, that is to say, holy buckets you have got to try my Maple Bourbon Pecan Chicken, which is so good Ben wasn’t even mad I used some of his precious bourbon collection to test and tweak it to perfection.

Maybe it’s because I didn’t tell him until after he shoveled an entire chicken thigh into his mouth whilst telling me how delicious it was?

Before we go any further, I have to recognize that this plate of lusciousness is sponsored by Fisher Nuts. I used their buttery pecans, which contain zero preservatives, in this comfort food dish whose taste screams “CALORIES!” but recipe contains zero butter, cream, what else am I missing…cheese? Bacon? Yeah, none of that. Look for Fisher’s new resealable packaging which helps keep their nuts fresher, longer on store shelves now. 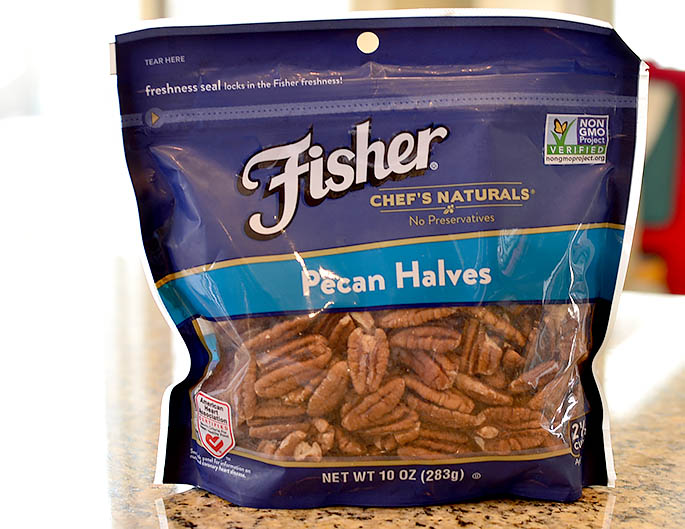 Back to this sassy, sticky, delectable dish!

Chicken thighs are seared in a skillet before its deglazed by a shot of bourbon. Don’t keep a bottle of bourbon in the house? No problem – I’ve got a hack for that. Next, the chicken thighs are nestled back into the skillet with a maple-dijon pan sauce then simmered until tender with a sprinkling of chopped pecans. 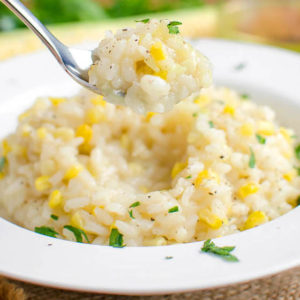 Totally foolproof. Literally I don’t think it’s possible to overcook chicken thighs – they just get more tender and juicy as they cook, and once drizzled with the thickened and syrupy sauce at the end? GET OUT. Now, bourbon and pecans go together like pecans and maple syrup, which is to say the three of them combined in this dish are just heavenly. The bourbon flavor is more of a whisper then shout, and lends a subtle, caramel-y background note that I’d definitely miss if it were left out. All that said, this dish is not sweet – it’s got the perfect balance of flavors. 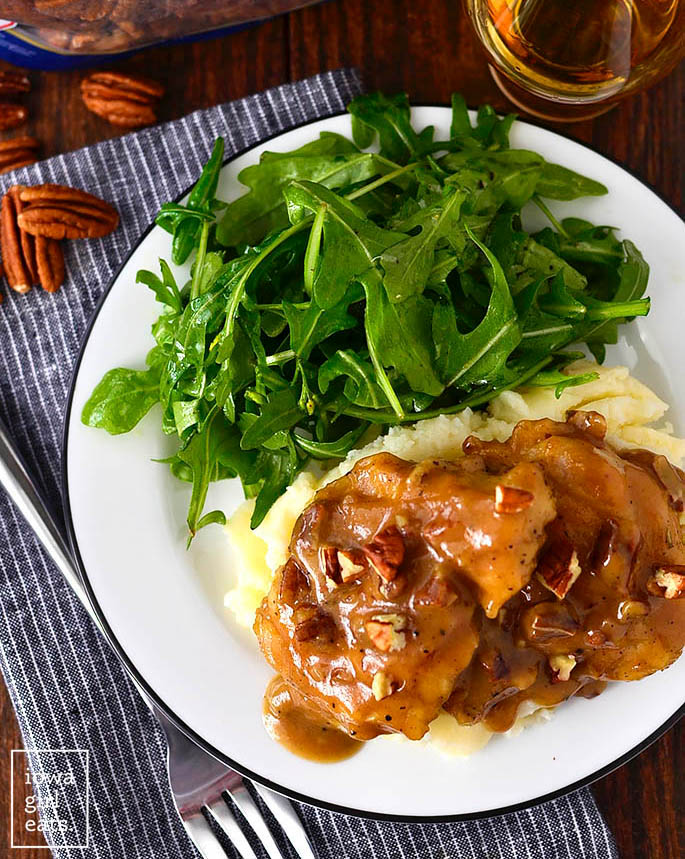 Start by adding gluten free flour to a shallow dish then generously season with salt and pepper. Dredge boneless skinless chicken thighs in the seasoned flour then shake to remove any excess flour and place onto a plate. Next get the sauce ready – in a bowl whisk together:

(The white bits are just fat from homemade chicken stock floating throughout!) Next, remove the skillet from the heat then add 2 Tablespoons bourbon. Two things: 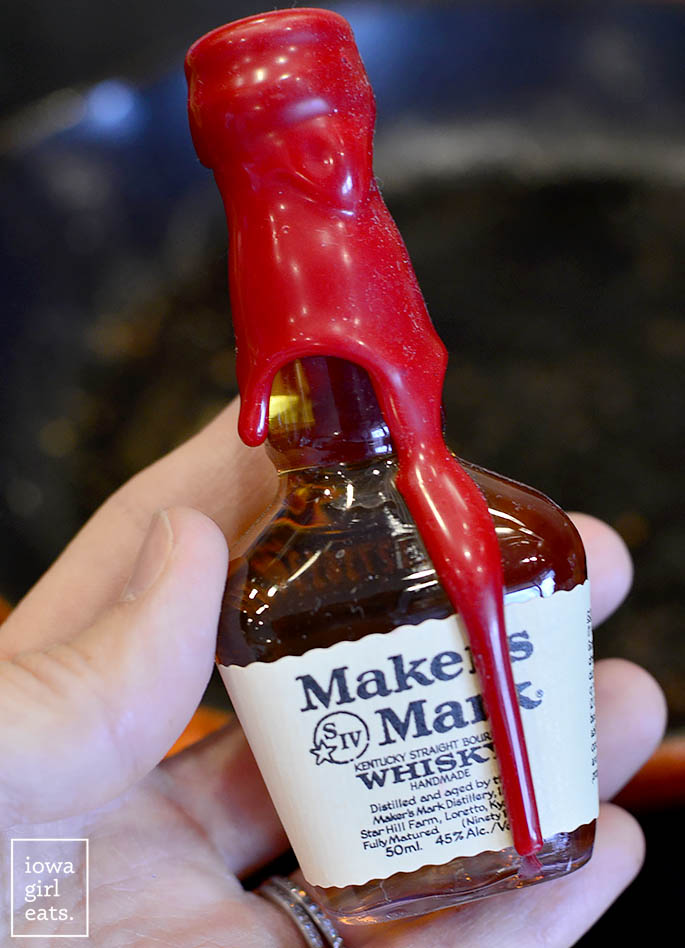 Add the maple sauce to the skillet then return it to the heat and bring the liquid to a simmer. Nestle the chicken thighs into the liquid then loosely cover the skillet with foil, turn the heat down to medium, then simmer until the sauce has thickened and the thighs are cooked through, 10 minutes.

I nestled my Maple Bourbon Pecan Chicken onto a pile of mashed potatoes then drizzled a few spoonfuls of the lip-smacking sauce on top. An arugula, parmesan, lemon and olive oil salad on the side rounds out this absolutely insane meal. I hope you love, love, LOVE it! Enjoy! 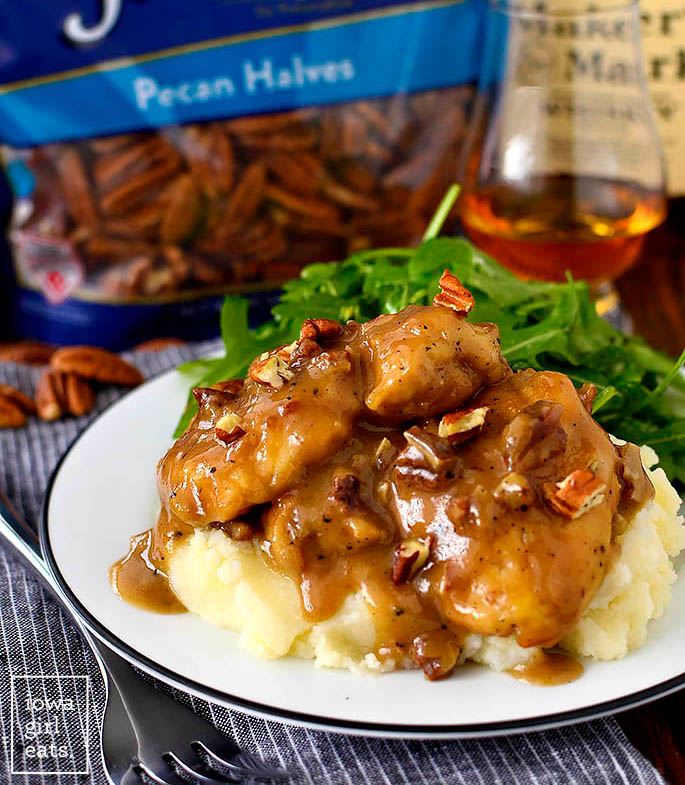 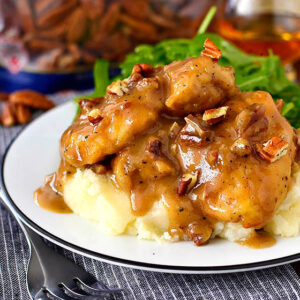 This is a sponsored conversation written by me on behalf of Fisher nuts. The opinions and text are all mine.