We’re in serious “April showers bring May flowers” mode over here. I was waiting to pick Lincoln up outside his classroom the other day and a fellow Mom who is new to the state asked me, “is it always like this here??” I could see the terror in her eyes. That said, soggy, grey, and blustery has been the weather du jour for the better part of the month and we’re all not so patiently waiting for the summer sun to start shining on the reg.

Until that day comes, the babies and I have been keeping busy with indoor projects like building pillow towers, digging our fingers into squishy kinetic sand (and trying to conceal my horror when more of it ends up on the floor than in the container,) plus lots of baking, including these Maple Cinnamon Oatmeal Breakfast Bars. If you like my Blueberry Oatmeal Breakfast Bars, you’ll want to make this ultra cozy version pronto – we polished off an entire pan in less than 24 hours! A few weeks ago Lincoln decided he no longer likes blueberries – mmkay! – so instead of watching him pick each individual berry out of the bars during breakfast or snack time, I made a version that swapped berries for chopped pecans, and honey for real maple syrup. Add a heavy dose of warming cinnamon, and I could have sworn it was October inside my kitchen while these super soft oatmeal bars were baking. The fall-like scent wafting from the oven was HEAVENLY!

The result is a perfectly sweet, refined-sugar-free breakfast or snack bar that’s chock full of healthy ingredients like oats, banana, coconut oil, and pecans, but so decadent tasting that it feels like you’re eating cake. It’s basically a bowl of oatmeal in bar form.

You know what we call that? An UPGRADE!

Keep these bars in the refrigerator all week for quick and easy breakfasts or snacks, or wrap them individually in saran wrap and freeze. Who’s ready to bake?! 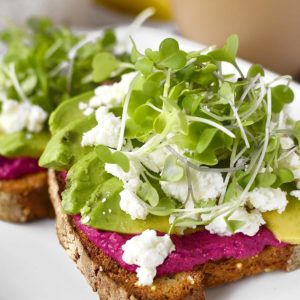 To a large bowl add gluten free old fashioned oats, oat flour, cinnamon, baking powder, and salt. I love the purity protocol oats from GF Harvest, though if you don’t need to eat GF you can use your favorite brand of old fashioned oats.

To make homemade oat flour, add old fashioned oats to a food processor or high powered blender like a Blendtec, Vitamix, or Ninja, then process until fine. Alternatively you could use store bought oat flour. 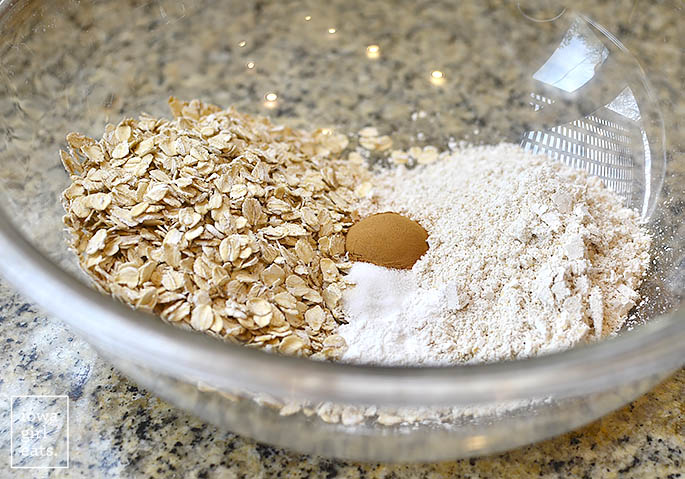 Next pour in a mixture of milk, egg, melted coconut oil, mashed banana, vanilla, and pure maple syrup (not pancake syrup,) then stir to combine. Last step is to fold in roughly chopped pecans. I make this recipe both with and without the pecans so if you have an aversion to nuts, or are allergic, feel free to leave them out. I add them for texture and a little boost of protein and fat. Pour the mixture into an 8×8″ baking dish then bake for 35-40 minutes at 350 degrees. Slice then enjoy, or cool and refrigerate for later – but don’t forget to warm them in the microwave first! Pair the bars with yogurt or fruit for a well rounded breakfast, or slather with flavored peanut, almond butter, or coconut butter for a real treat. However you serve them – enjoy!