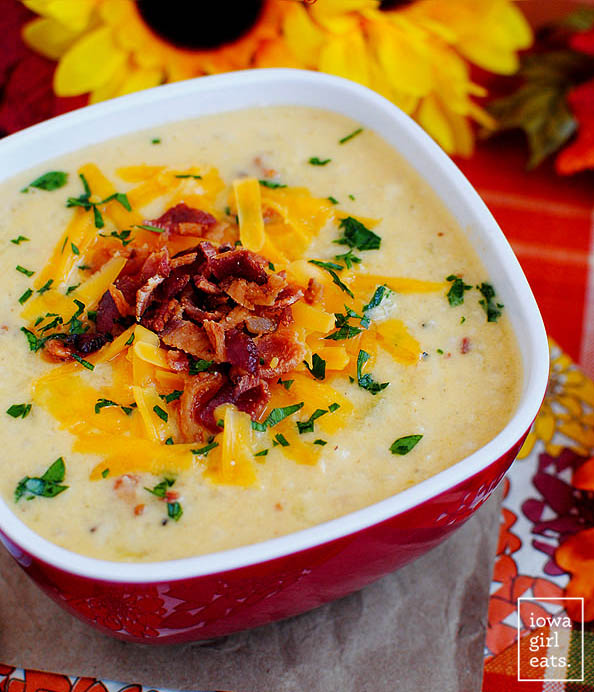 When I was in high school students were given 30 minutes to eat lunch every day. Starting senior year we were allowed to leave campus during that time, to do what whatever it is that seniors do, so long as we were back before the next period started.

Except it always took 5 minutes to round everybody up then another 5 to argue over who had to sacrifice their parking spot. This meant that by the time my friends and I arrived at our dining destination we’d have 10 minutes to scarf our food before having to turn around and come back. Usually we sped over to nearby Panera for a quick and satisfying You Pick 2. #IYKYK.

Their creamy Baked Potato Soup and Caesar Salad was my usual order and, recently reminiscing about the soup, I decided to create an updated, non-teenage-metabolism version of it using one of my favorite potato swap outs: grated cauliflower. Boom – Bacon-Cheddar Cauliflower Chowder was born! 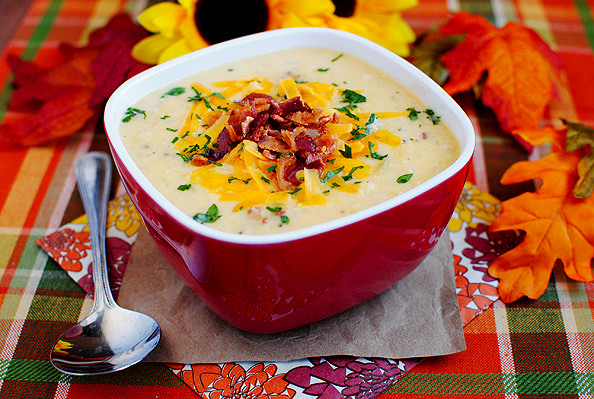 Bacon-Cheddar Cauliflower Chowder is a low-carb version of Baked Potato Soup. Less carbs, ALL that rich and creamy flavor. You won’t miss the spuds for a second! 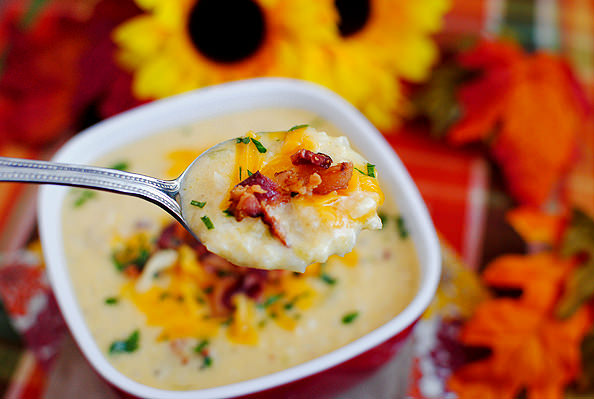 Clocking in at 265 calories, with 7 grams of carbs and 15 grams of protein per serving (per Livestrong’s Recipe Calculator Tool) I could not be more pumped about this chowder. You will LOVE it! 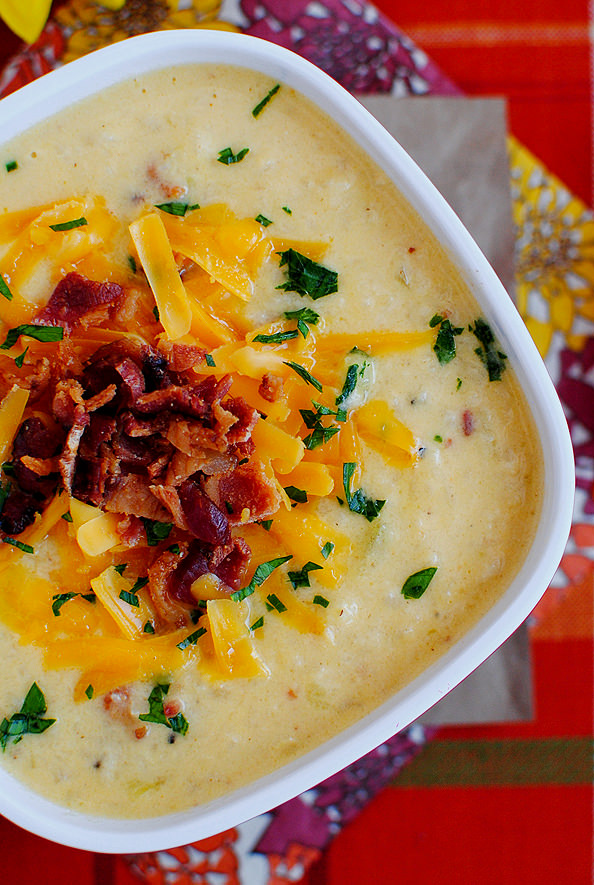 Start by chopping 1 celery stalk and 2 garlic cloves. I used my food processor for all the prep work in this recipe so, instead of repeating myself 100 times, just know that you can hand chop/use a box or flat grater for everything you see below. 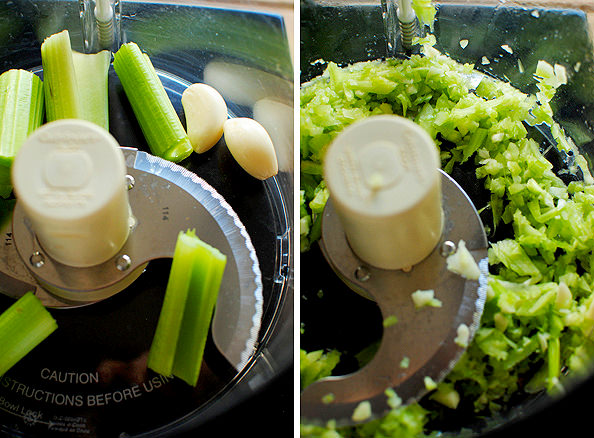 Remove the celery and garlic to a plate or bowl then fit the processor with a grating blade and grate 1/2 head of cauliflower, to equal 4 cups grated cauliflower. 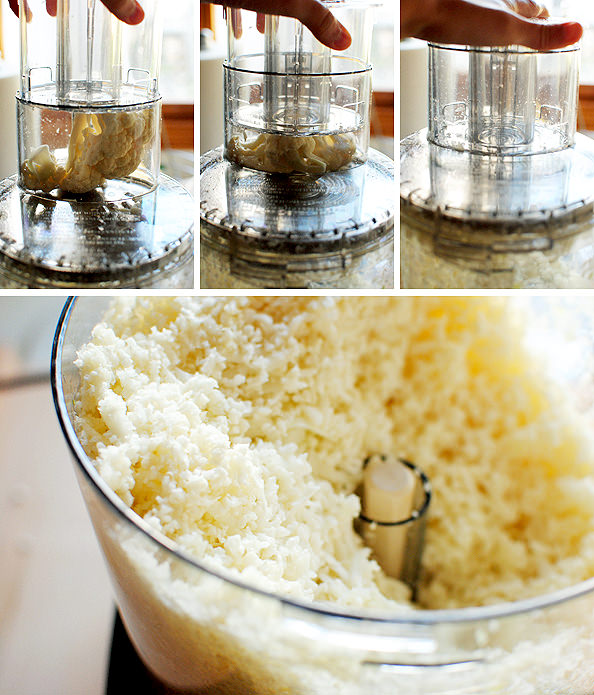 Again, a box or flat grater will do the job just fine if you don’t have a food processor. 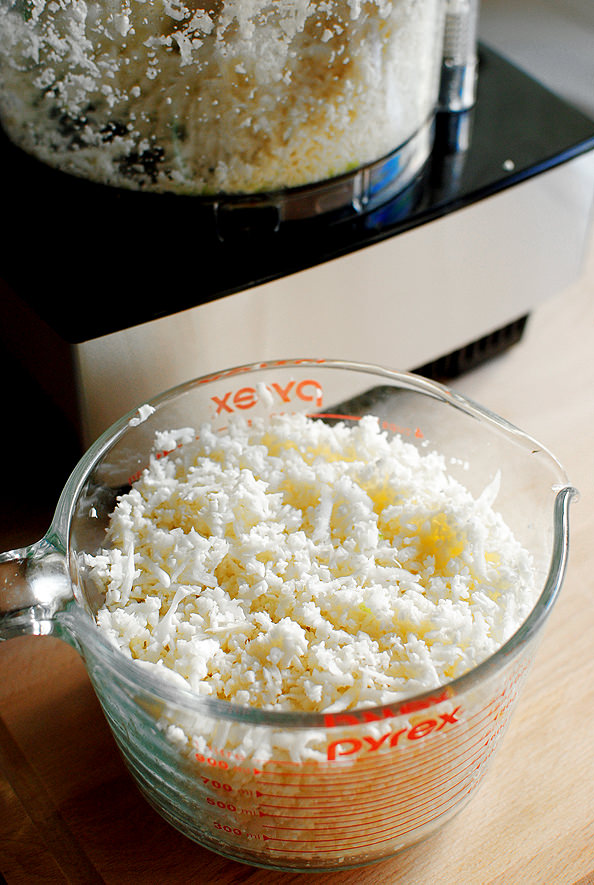 Next grate 2-1/2 cups sharp cheddar cheese to be used in both the chowder and as a garnish. I recommend grating cheese fresh for things like soups and chowders, as the pre-grated stuff is coated in, well, stuff, that makes it not melt as well as fresh. 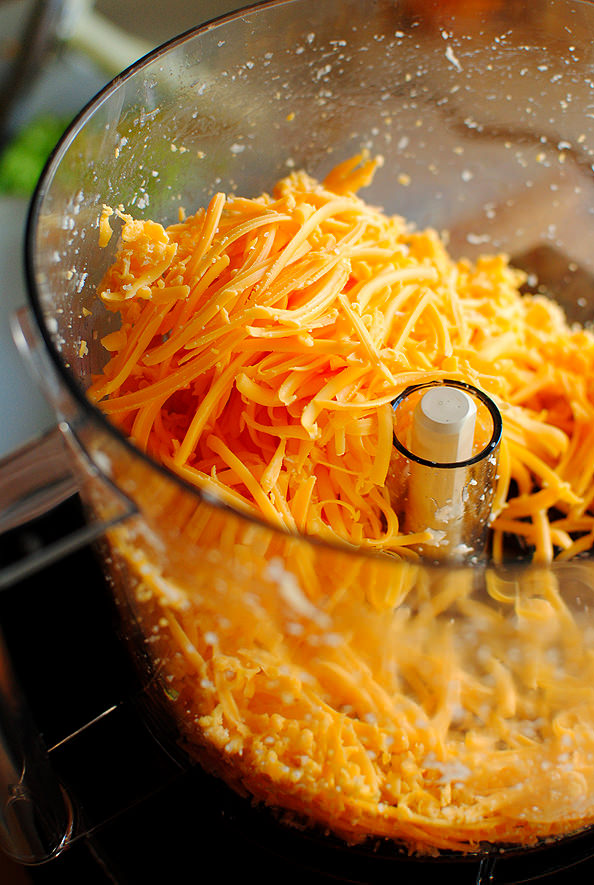 Next chop 8 strips center-cut bacon, to be used in both the chowder and as a garnish. 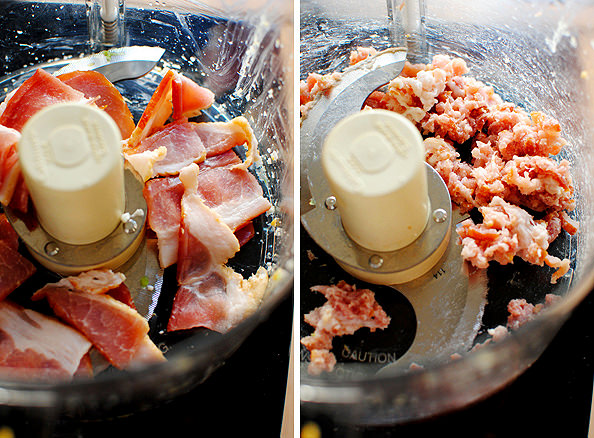 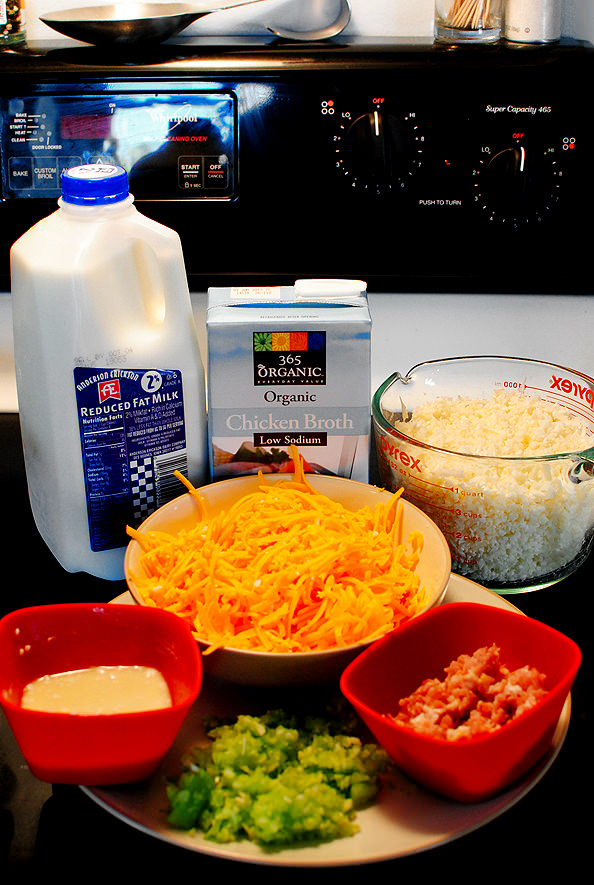 Heat a large soup pot over medium heat then add the chopped bacon and let it cook low and slow until it’s nice and crispy. Use a slotted spoon to transfer the cooked bacon to a paper towel-lined plate then remove all but 1 Tablespoon drippings from the pot. 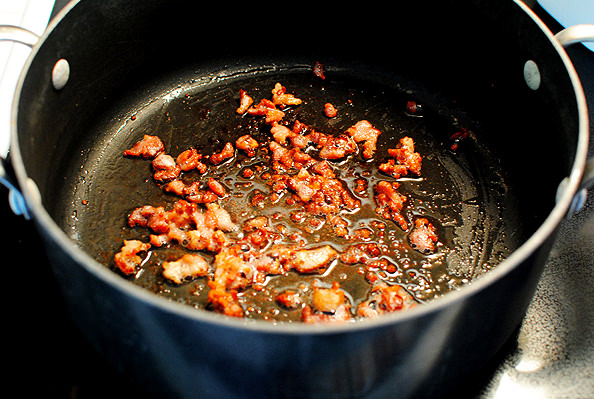 Next add the chopped celery and garlic, season with salt and pepper, and then saute until the celery is tender, 4-5 minutes. 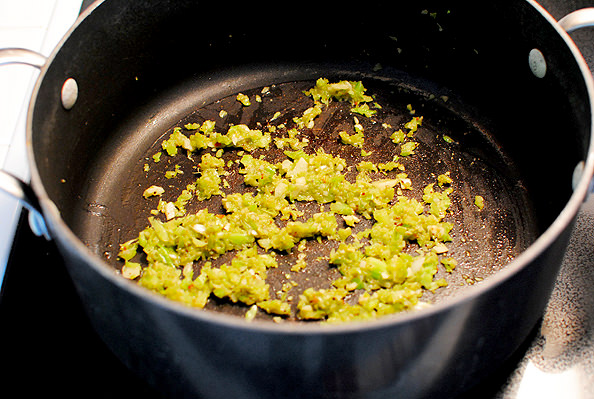 Add the grated cauliflower to the pot plus 1 teaspoon onion powder and 2 Tablespoons water then season with more salt and pepper and place a lid on top. Steam the cauliflower until tender, 5-7 minutes, stirring every so often. 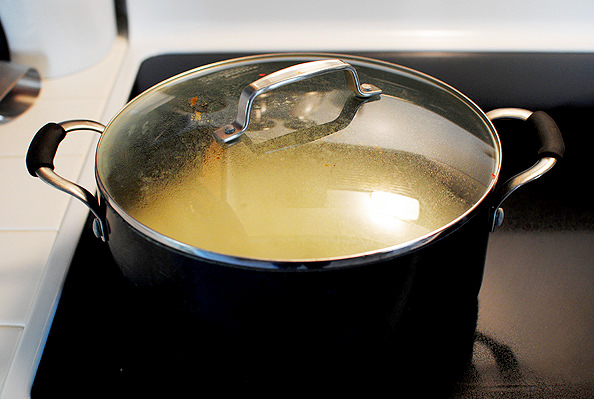 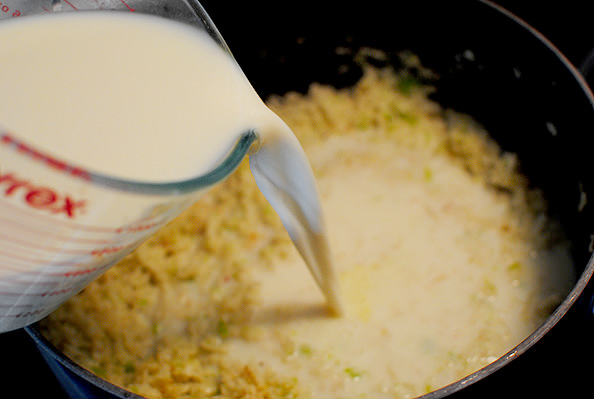 Also throw in a dash (or 3, or 30) of your favorite hot sauce. This will give the chowder a fabulous flavor and pretty orange color. 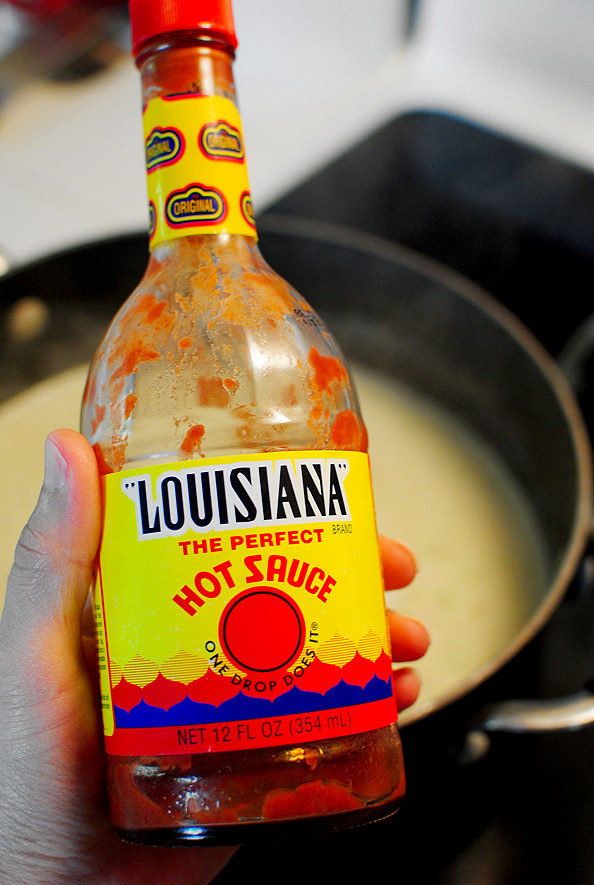 Almost done! Bring the chowder up to a boil then slowly drizzle in 2 Tablespoons gluten-free or all-purpose flour whisked with 1/4 cup chicken broth while stirring constantly. 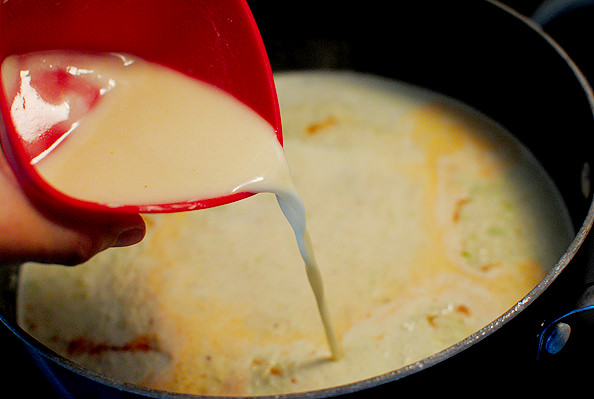 The flour will make the chowder lusciously thick and wonderful in just a couple of minutes. 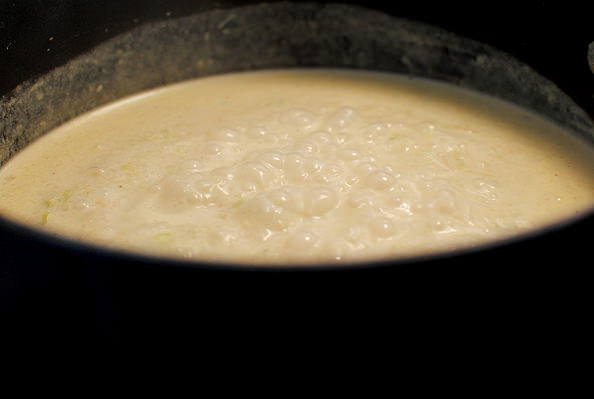 Finally, turn off the heat then stir in 2 cups shredded cheddar cheese until smooth, and then stir in half the cooked bacon. Taste then add more salt, pepper, and/or hot sauce if necessary.

Ladle the cauliflower chowder into bowls then top with remaining shredded cheese and cooked bacon. I am so jazzed over this recipe! I mean of course grated cauliflower isn’t going to have the same, super-smooth mouth feel as cooked potatoes, but it is DARN close. Thick, creamy, cheesy perfection – enjoy! 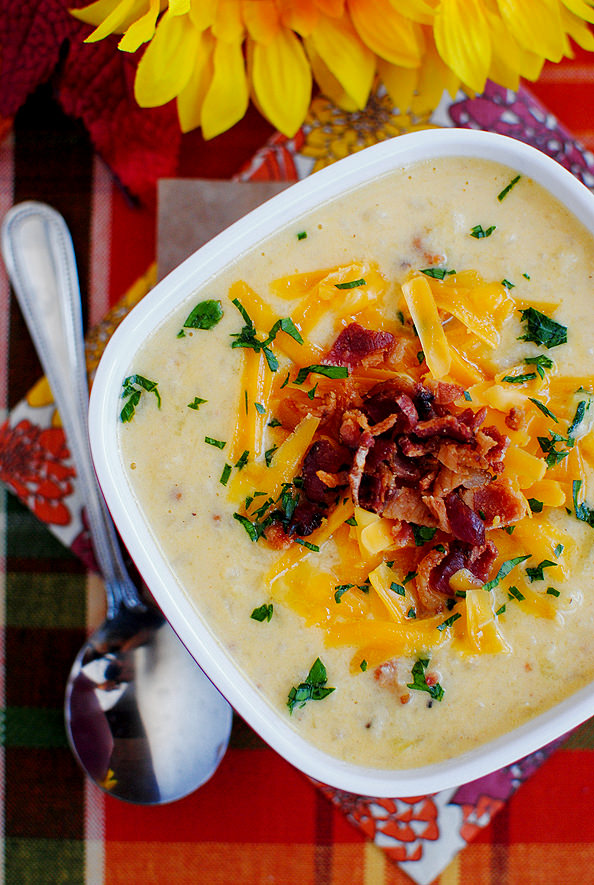 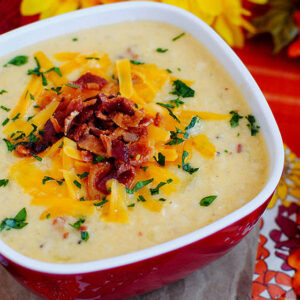