Happy Monday everyone! I hope you had a wonderful weekend!

Despite the fact that it’s the middle of December, it poured and poured here for half the weekend – what’s up with that?! Saturday I had a morning coffee date with Alexa of Simple Roots Wellness, who was in town Christmas shopping with her husband – love her! I met Alexa at an Iowa Bloggers Retreat we both attended this summer and she is a SUCH a gem. It was fabulous spending a couple hours talking shop and swapping stories. Be sure to check out her blog and fabulous recipes if you haven’t already!

It started raining Saturday night and didn’t stop for another 24+ hours, so Sunday morning Ben and I packed breakfast and drove the little boy up to Reimen Gardens in Ames, about 40 minutes north. Reimen Gardens is known for their gorgeous and extensive outdoor gardens (which I’m kicking myself for not going to see this fall!) but it was the indoor area we were after, complete with a Christmas railroad exhibit we thought Lincoln would love. 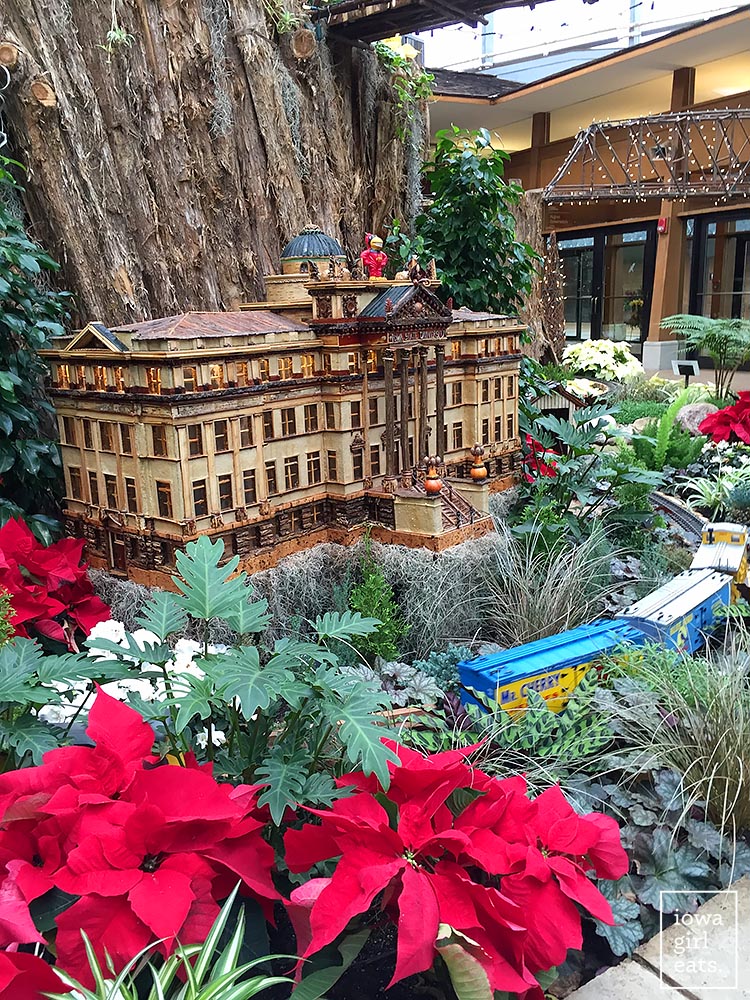 Ding, ding, ding – we had a winner! He raced around the indoor garden for a good 40 minutes chasing the trains, watching them go under bridges, and around curves. Total home run rainy-day toddler activity. 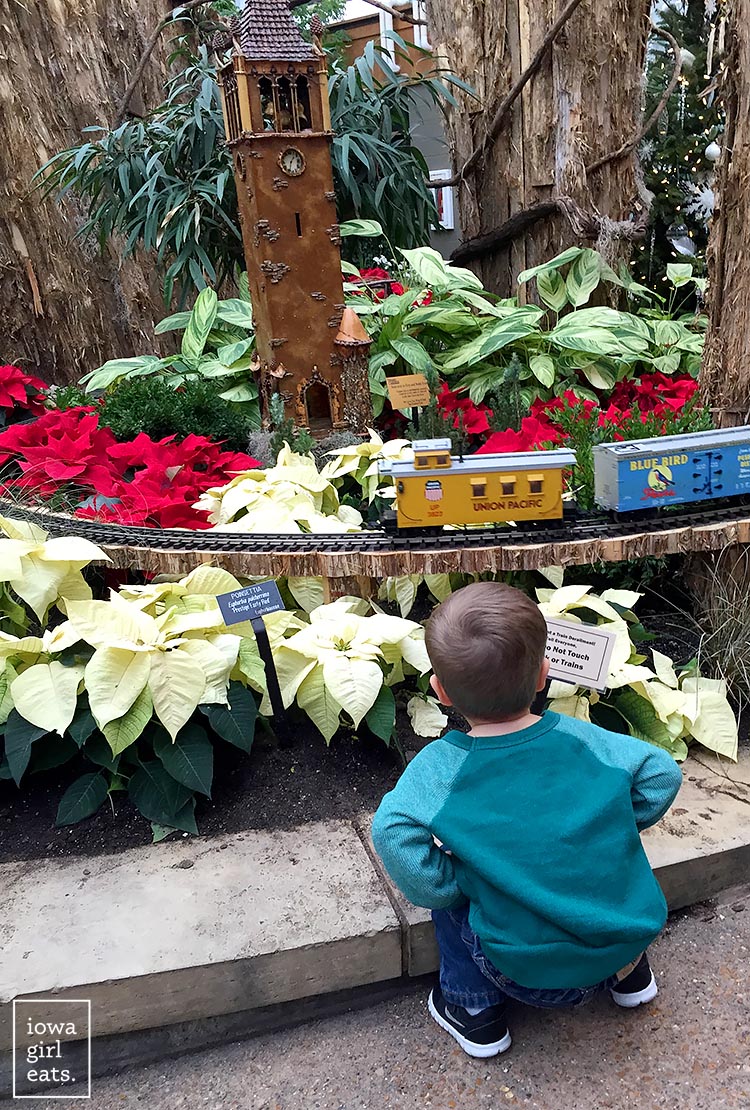 Blurry family photo courtesy of a kind gentleman who offered to take it! 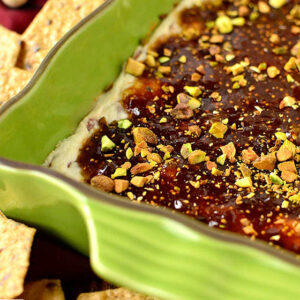 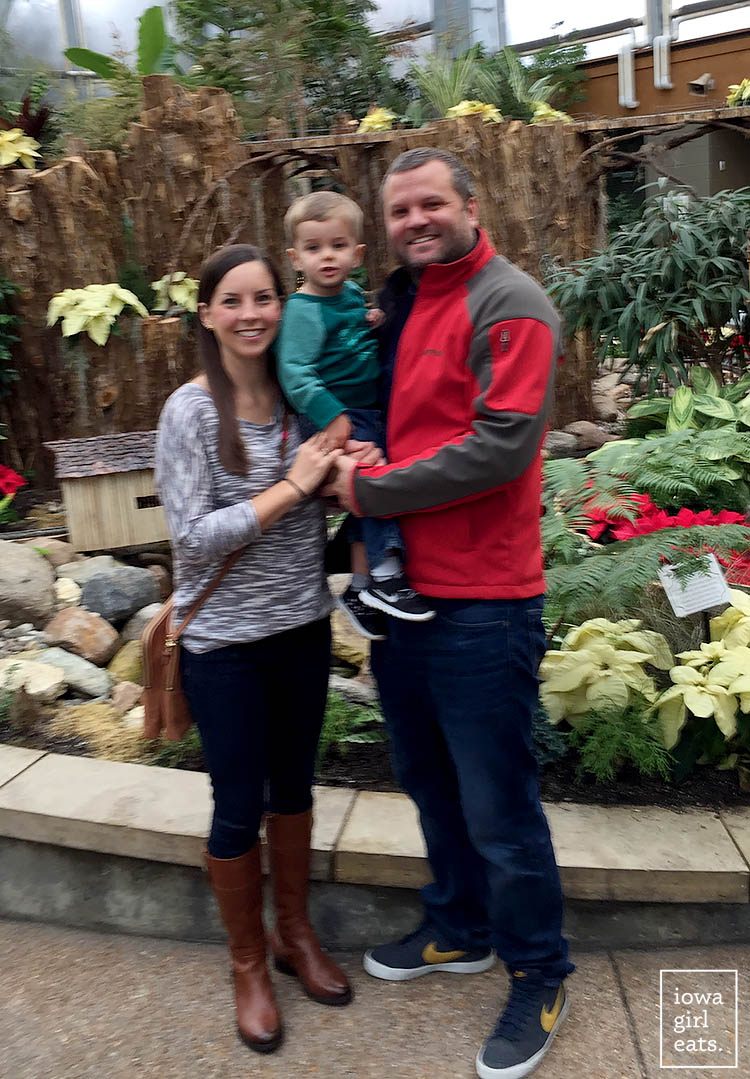 Reimen Gardens also has an indoor butterfly garden, which is one of the neatest experiences to tour. Caterpillars are raised until they hatch from their cocoons, then are taken to the butterfly room where they’re gently transferred into their new environment by hand and left to fly around for the rest of their days. I mean there were hundreds of butterflies in there – I had to fight the instinctive urge to swat a few times! 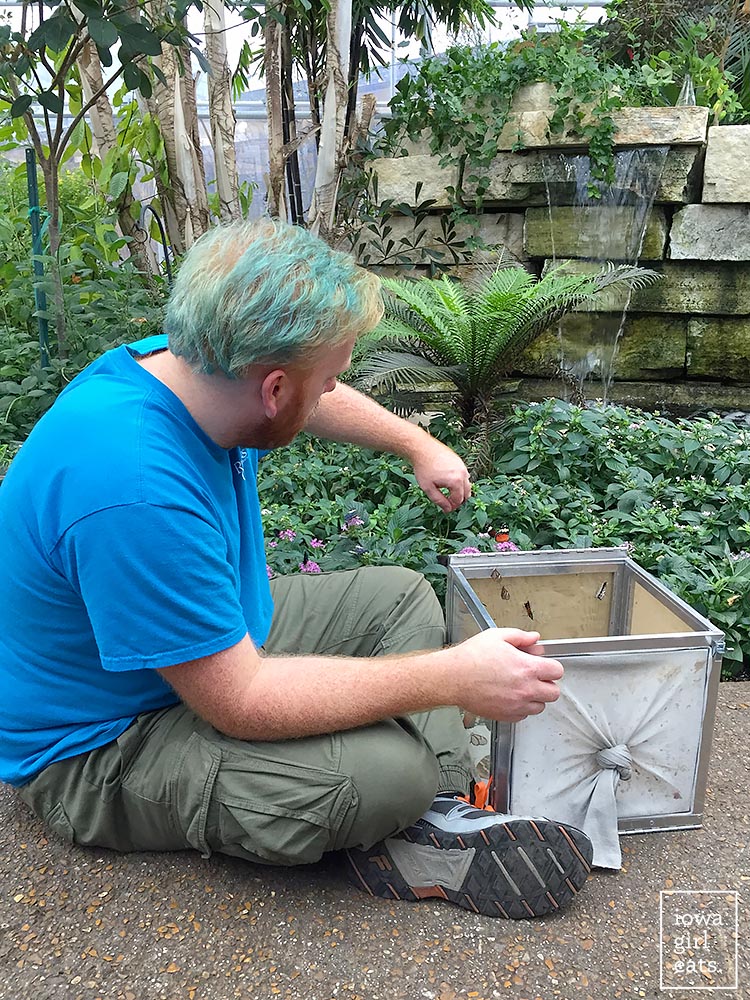 Despite reading The Hungry Caterpillar approximately 400 nights in a row, Lincoln was more interested in the trains than the butterflies, but I could have stayed in there forever. It was such a nice, springy experience compared to the dreariness outdoors. The butterfly on the right side of this photo had the most incredible blue wings when it was fluttering, but was a little camera shy when I was near. Go see them for yourself to get the full experience! ;) 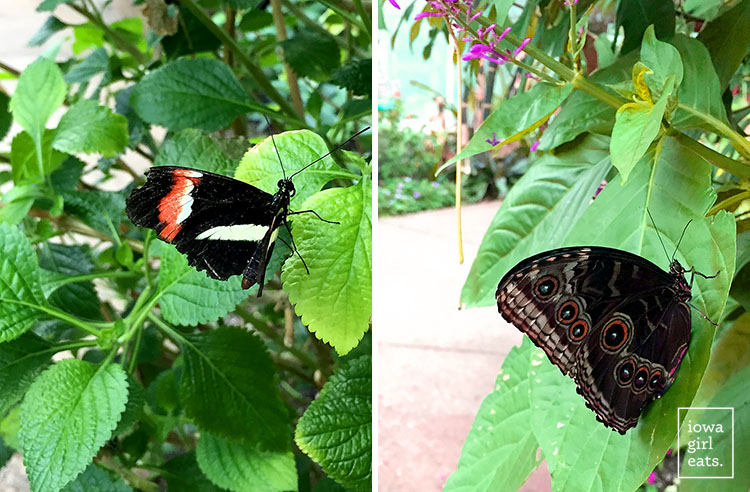 Afterwards we scooted down to Hickory Park for lunch, of course! Believe it or not HP is very food allergy conscious, and not only was our server knowledgeable about what contained dairy for Lincoln, but they also have an extensive gluten-free menu. Any place that serves gluten-free house-made smoked sausage is a place I want to be. 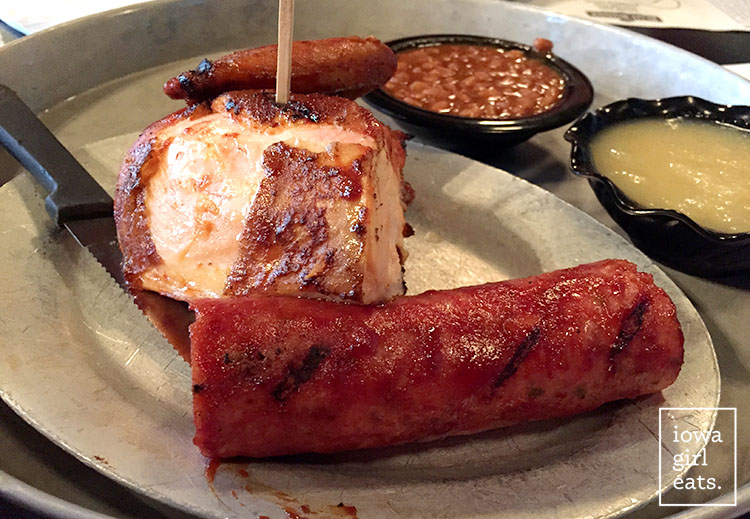 Another place I want to be at? ANYWHERE Bacon-Wrapped BBQ Shrimp with Chimichurri Dipping Sauce are being served. Talk about a home run – this is a must-try holiday appetizer recipe! 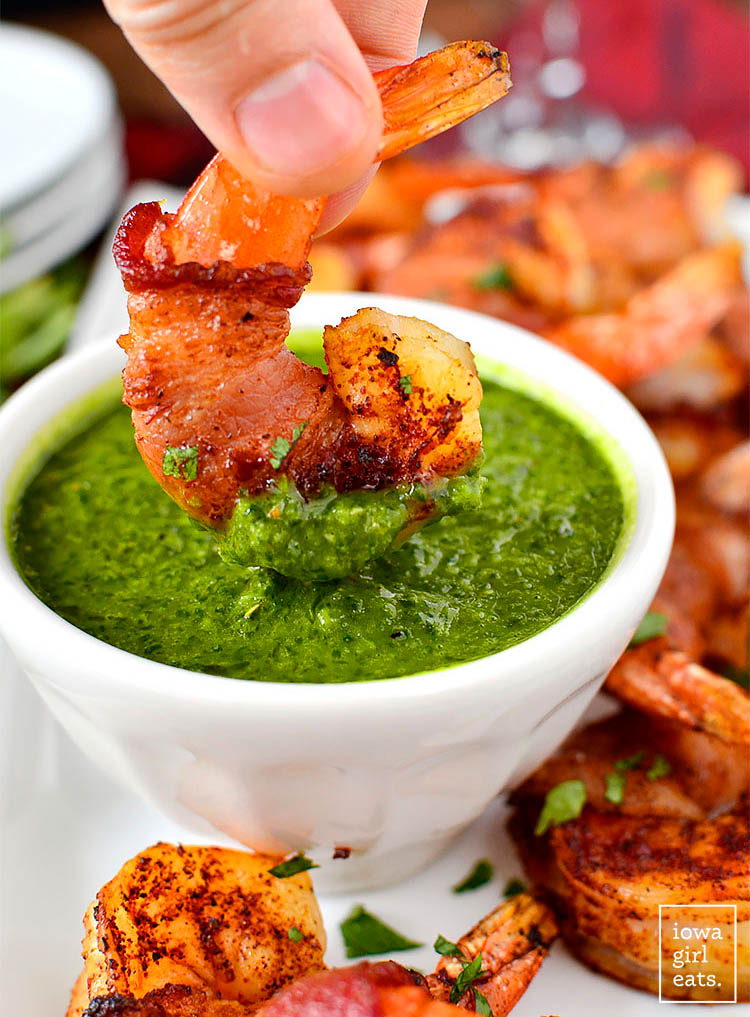 My family and I love seafood all year round, but the holidays are when we really indulge – especially on shrimp. For as long as I can remember my Mom has made Cajun Shrimp for Christmas Eve dinner, which is shrimp baked with butter and Cajun seasoning, the latter half of which is sopped up with warm sourdough bread. This dish is as sinful and delicious as it sounds, and we look forward to eating it all year long…especially while sitting in Christmas Eve church service. Raise the candle, blow it out, run to the car, and head home for shrimp. (I kid, I kid!)

I decided to give our favorite holiday treat a twist by turning it into a poppable appetizer swapping Cajun spice for a homemade, 4-ingredient BBQ seasoning rub, wrapping each jumbo shrimp in salty bacon, and then whipping up a bright and zingy Chimichurri Dipping Sauce to serve with them, which I want to slather over EVERYTHING. Especially a ribeye. But that’s another blog post!

I think the fact that I ate 1/2 the recipe (ZERO SELF CONTROL) the first time I made these shrimp speaks for itself. I’d actually never made bacon-wrapped shrimp before testing this recipe, and I’m happy to report it’s really easy. Honestly I had visions of overcooked shrimp and undercooked bacon dancing in my head, but when they emerged sizzling and perfectly pink from the oven, my heart skipped a beat.

I can imagine these bacon-wrapped shrimp being served as a Christmas Eve appetizer, Christmas Day nibble between meals, or on a platter at your New Years Eve party. The smokey-sweet BBQ rub on the shrimp and savory bacon are totally indulgent tasting, while the fresh Chimichurri dipping sauce – a mixture of fresh herbs, lemon, and seasoning – makes each bite sing. You must try this dish – if not to eat, then to at least look it. It is gorgeous! (But also eat it, alright?) :) 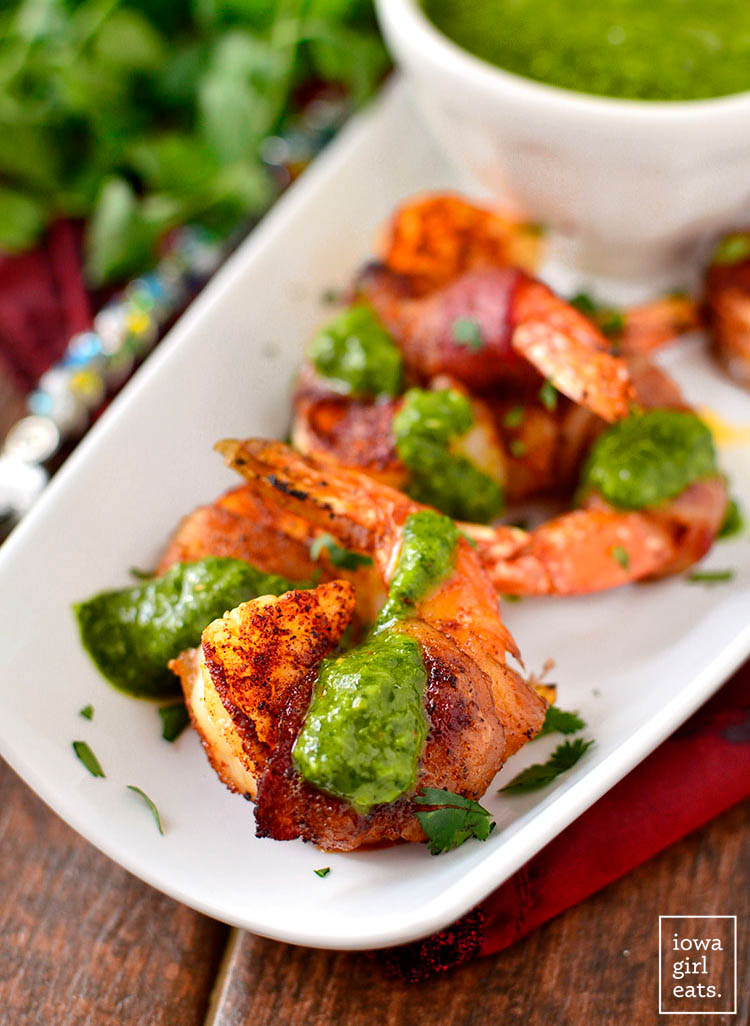 Start by making the homemade BBQ rub. This is the same smokey-sweet rub I used on my BBQ Salmon BLT Salad – it is so delicious. Just combine 2 teaspoons smoked paprika, 1-1/2 teaspoons salt, and 1 teaspoon each brown sugar and black pepper together in a small bowl then set aside. 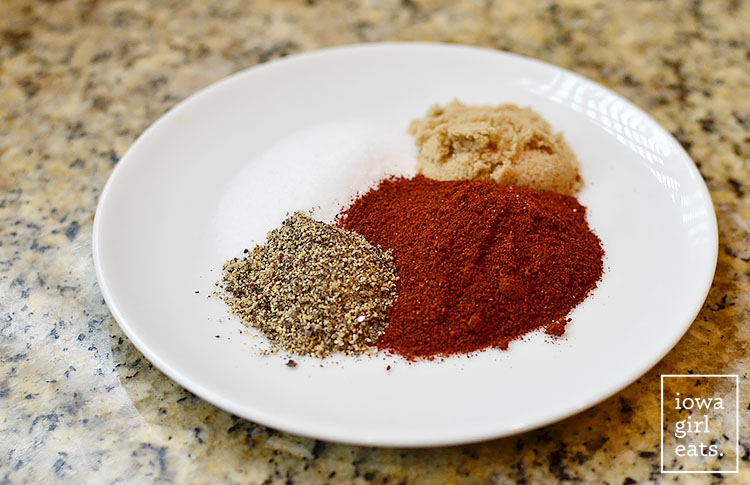 Next cut 8 slices bacon into thirds. I really like this Applegate Naturals Uncured Sunday Bacon. The quality is always really consistent – not too much extra fat sans meat, which I like. 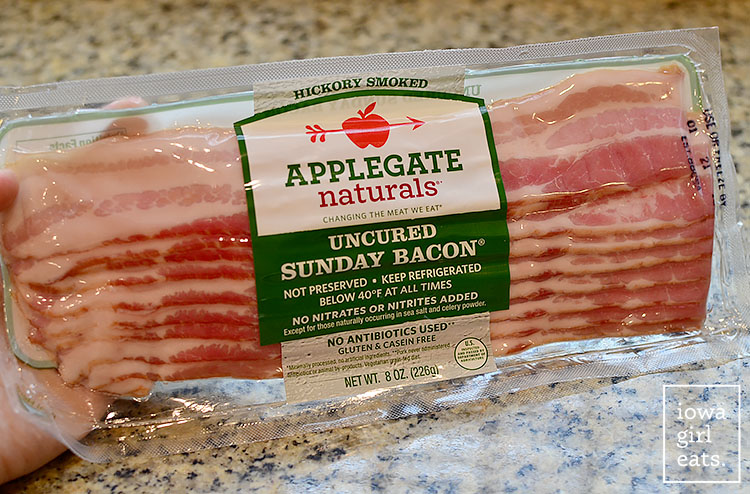 Finally, pat 1lb jumbo shrimp that’s been peeled (tails left on,) and deveined dry between sheets of paper towels. Look for shrimp that say “16/20 count” which means there are 16-20 shrimp in a pound. These are going to be considered “jumbo”. If you can only find smaller shrimp, that’s ok. You’ll want to maybe cut the bacon into quarters and reduce baking time. 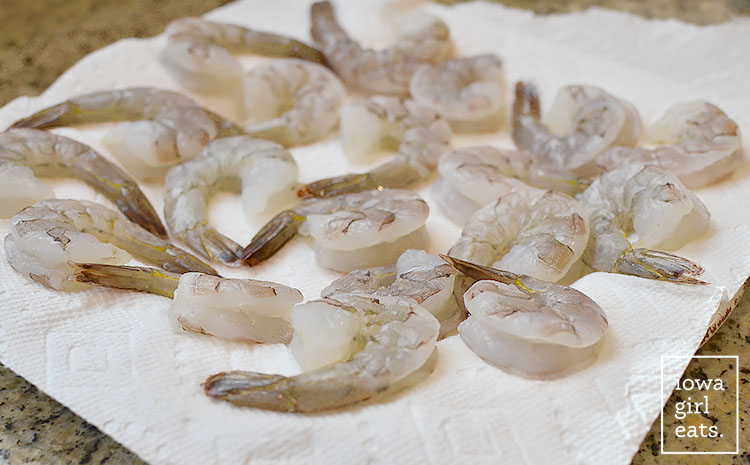 Assembly time! Setup stations with the BBQ seasoning, the shrimp, and bacon. 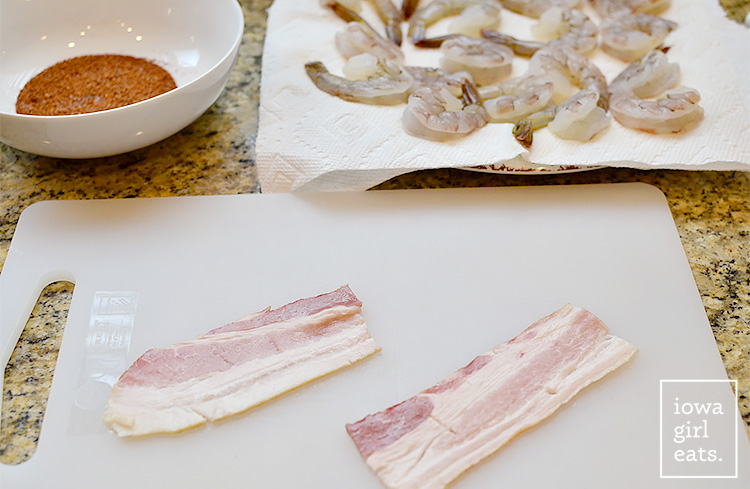 First sprinkle each shrimp liberally with the seasoning mix, place it on the center of a strip of bacon, and then wrap it around the center of the shrimp. Don’t be afraid to pull and stretch the bacon if you need to!

Place the shrimp seam side down on a cooling rack topped, foil-lined, and nonstick-sprayed (whew!) baking sheet. You could use toothpicks to secure the bacon if you’re worried about it unraveling, but I was feeling lucky…ok, lazy! 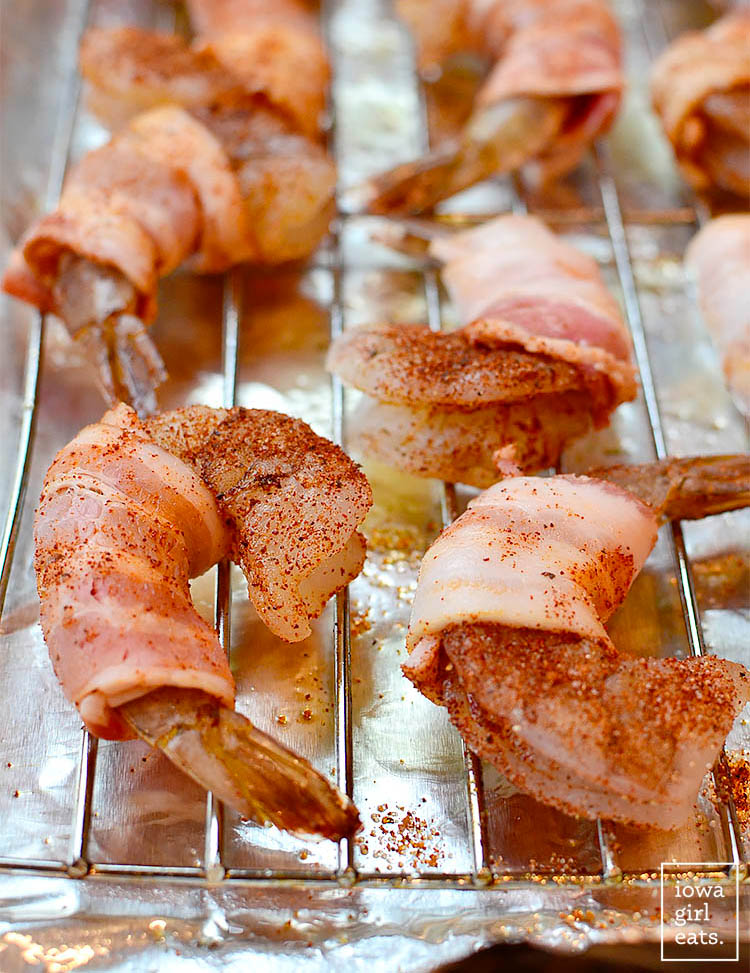 Pop the shrimp into a 450 degree oven to bake for 13-15 minutes. In the meantime, make the Chimichurri Dipping Sauce. As I mentioned, this stuff is unbelievable paired with meats of any kind – not just seafood. I’m dying to try the leftovers on a steak, or even mix it in ground beef for Chimichurri burgers!

All you do is add 1 bunch parsley torn from the stems, 1/2 bunch cilantro torn from the stems, 3 Tablespoons fresh lemon juice, 3 garlic cloves, 1/2 teaspoon dried oregano leaves, 1/4 teaspoon cumin, salt, and pepper to a food processor, then process until the herbs are finely chopped. Next, stream in 6 Tablespoons extra virgin olive oil while processing then let it whir until the sauce is very smooth. SO. GOOD and holy cow, is it ever beautiful!

Once the shrimp are cooked through and the bacon is sizzling, transfer them to a platter with a dish of the dipping sauce. Present to your friends and family, then dig in! 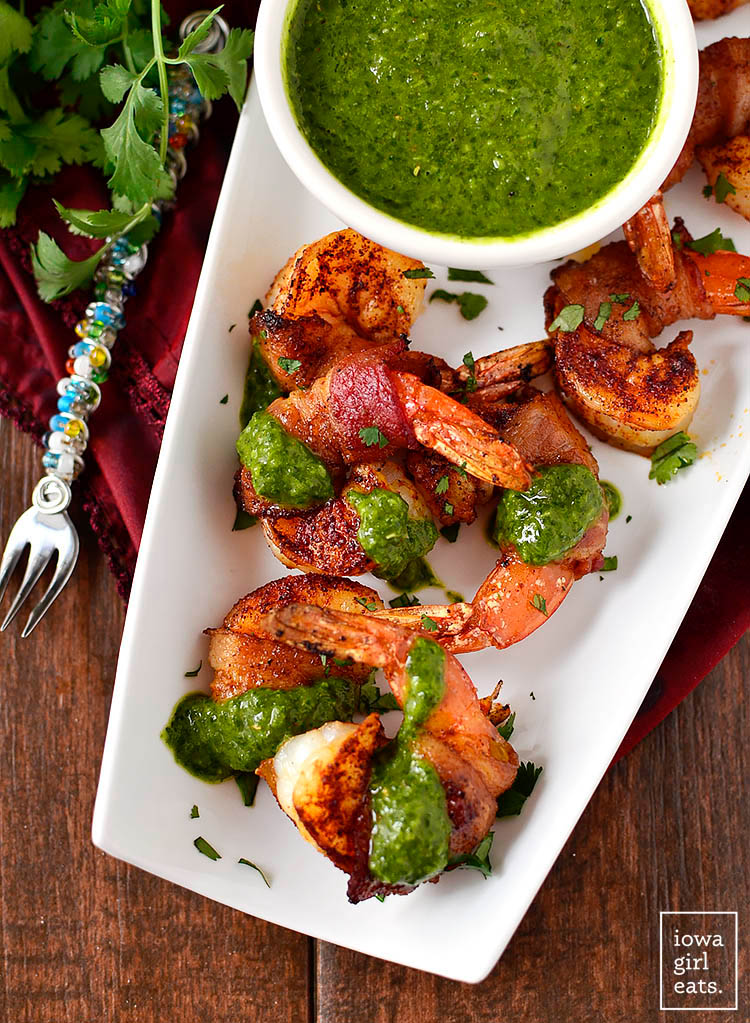 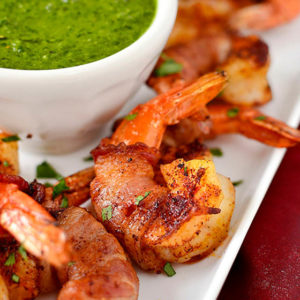 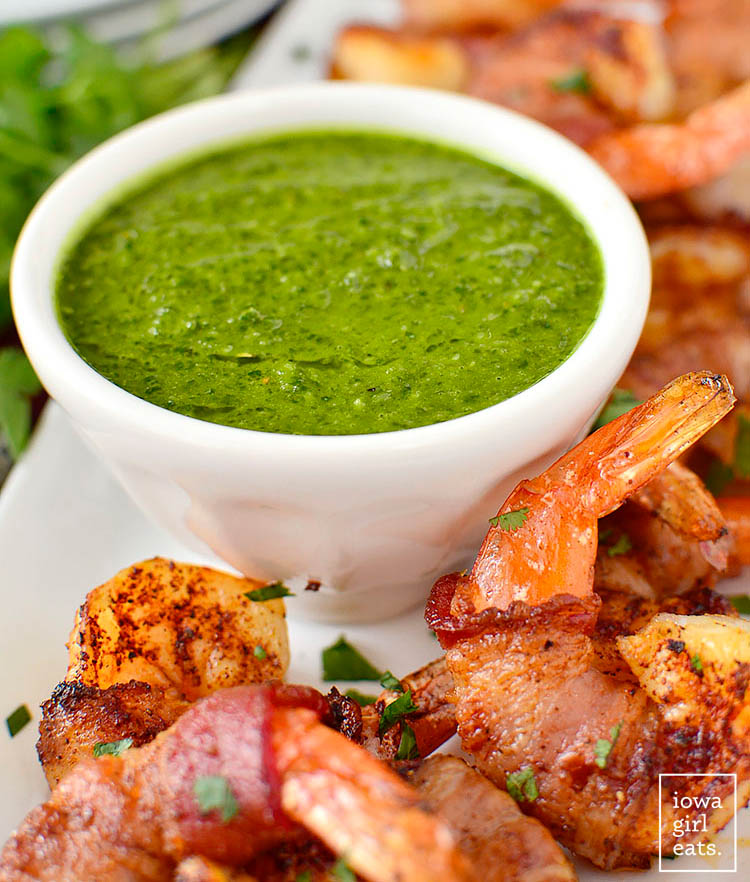 What I recommend is not waiting until the holidays to bake a batch of these bad boys – call it recipe testing – I’ll vouch for ya’! Whenever you make them, enjoy, enjoy!