Buffalo Chicken Quinoa Mac and Cheese is a delicious alternative to classic mac and cheese! 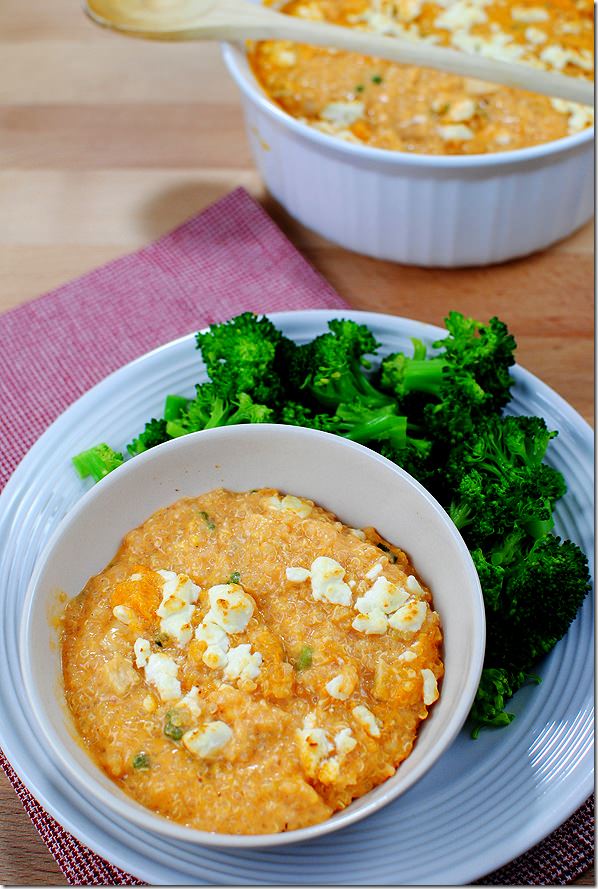 The Quinoa Mac and Cheese I shared a couple weeks ago was such a hit with Ben, myself AND you guys, that I decided to spruce it up a bit with the addition of chicken, not one but two types of cheese, and dun-dun-dunhhhh buffalo sauce – muwahaha! 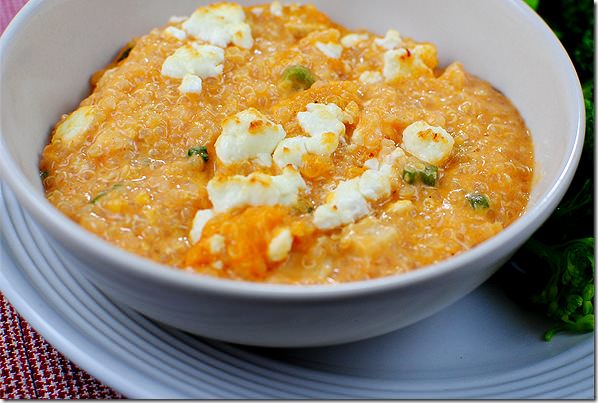 I’m calling my Frankenstein creation Buffalo Chicken Quinoa Mac and Cheese, which is kind of a mouthful – but then again, so is the dish. Ok I have to admit – I had absolutely no idea how this recipe was going to turn out. A classic cheese sauce made with flour, milk and cheese would make up the base, that much I knew, but how would the chicken, buffalo sauce and quinoa mix in? Would the buffalo sauce play nice with the cheese sauce? Clash with the naturally nutty taste of the quinoa? Turn into a gooey mess?

There was only one way to find out, of course, so I charged full speed ahead and right on into the kitchen. Here’s the recipe I came up with! 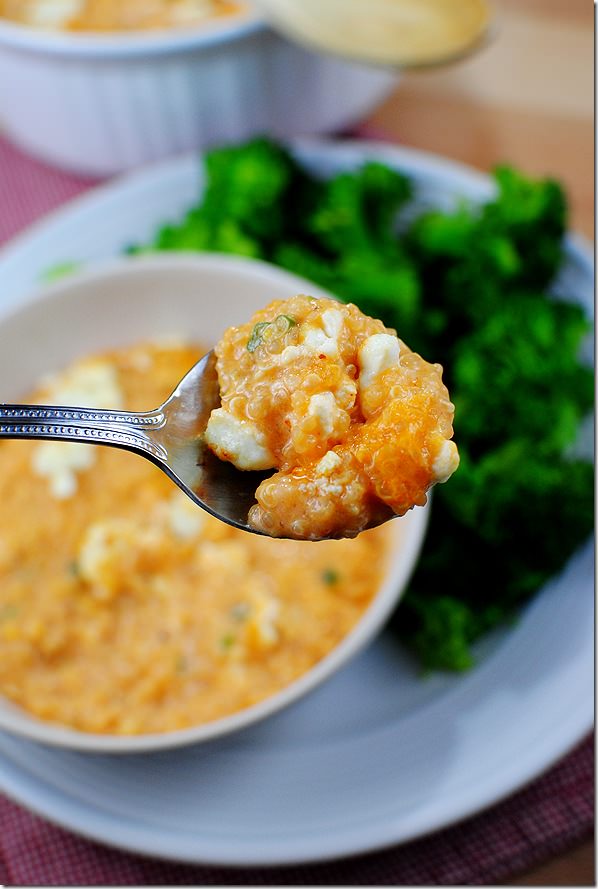 Start by cooking 1-1/4 cups rinsed quinoa in water until cooked and tender. 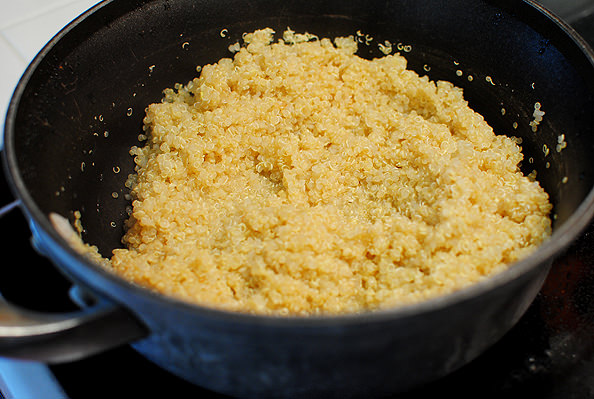 Meanwhile, season 1 chicken breast with garlic powder, onion powder, salt & pepper, then cook it in a skillet with non-stick spray. Chop the chicken into bite sized pieces, and set it aside. 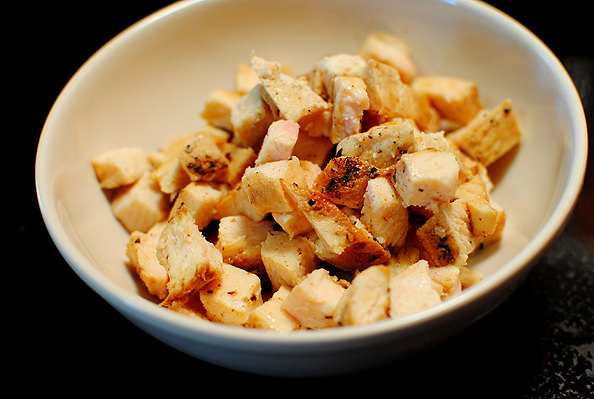 Next make the cheesy sauce that binds everything together. Start by whisking 1/2 cup milk together with 2 Tablespoons flour in a medium-sized skillet or saucepan over medium heat. 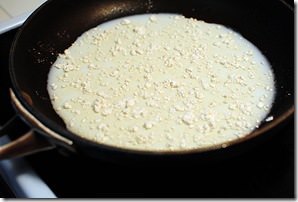 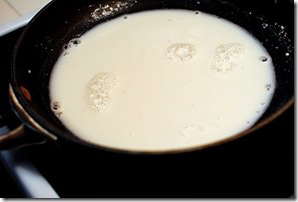 Add an additional cup of milk, and a couple sliced green onions, then bring the mixture to a boil while stirring constantly. 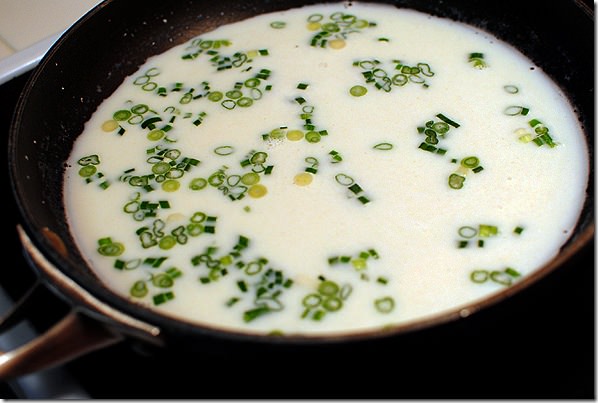 After the mixture boils continuously for one full minute, take it off the heat and add in the goodies, starting with 1/4 cup + 2 Tablespoons buffalo sauce. 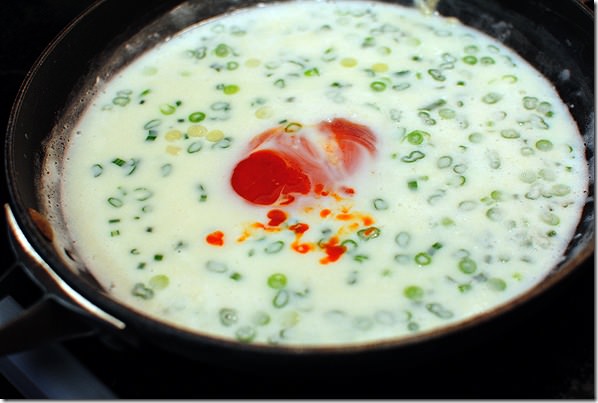 BTW – I like shredding cheese for sauces myself, as bags of pre-shredded cheese have cornstarch and other ingredients added to make sure they don’t clump together, which results in a less velvety smooth sauce, imo. 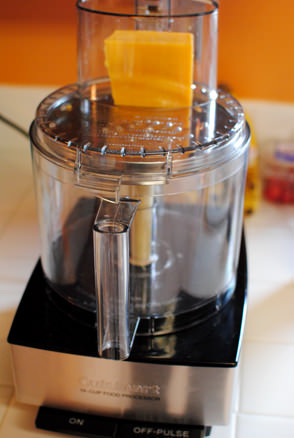 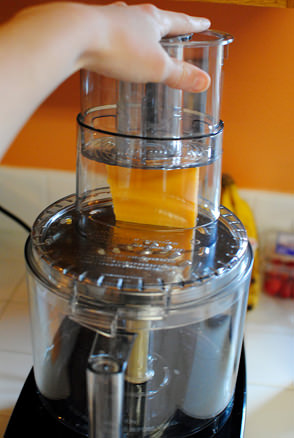 A quick spin through my food processor using the shredding blade took care of it lickity split. Alternatively, a box grater would work “grate”. HA! Right. Stir the mixture together until the cheese is completely melted, then stir in the cooked quinoa and chopped chicken. 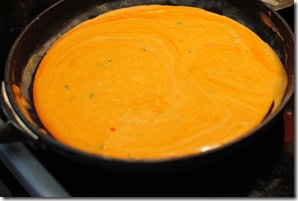 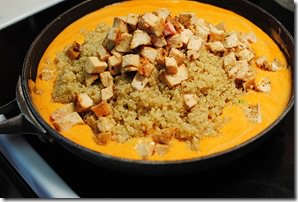 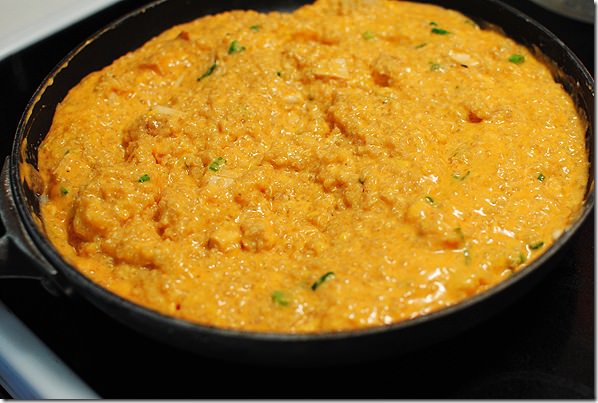 Pour the mixture into a non-stick sprayed casserole dish, and dot the top with tangy chevre. This is my nod to the classic bleu cheese and buffalo flavor combo, but uses some of the 52lbs of chevre I bought from Costco a couple weeks ago… 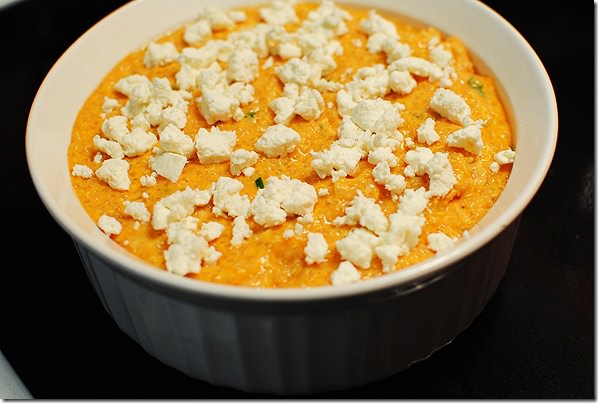 Broil ’til golden brown & bubbly, then let the quinoa mac and cheese sit for at least 5 minutes to thicken up before serving…if you can wait that long! 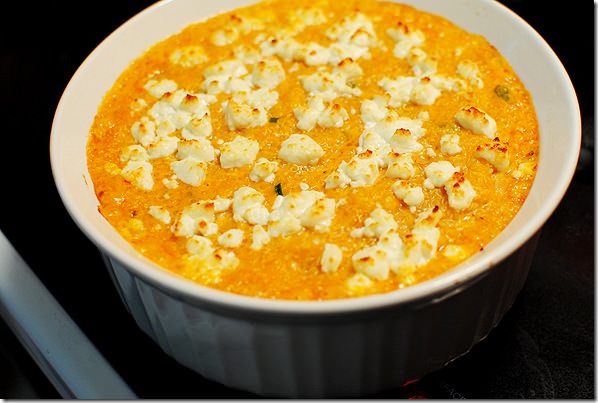 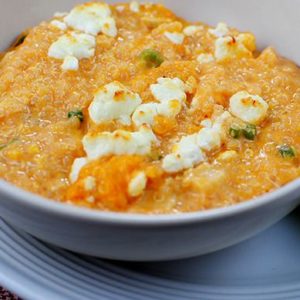 Buffalo Chicken Quinoa Mac and Cheese is a delicious alternative to classic mac and cheese!

Pure, spicy lusciousness! I actually whispered “uh-oh!” after my first bite because I knew seconds were going to be hard to resist. Which…they were. I loved how the poppy quinoa and bites of chicken gave the Buffalo Chicken Quinoa Mac and Cheese texture, while the buffalo sauce and chevre gave it such a unique flavor. The photos make the quinoa mac look a little thinner than it actually was, and it also thickens up the longer it sits. This is such a treat! 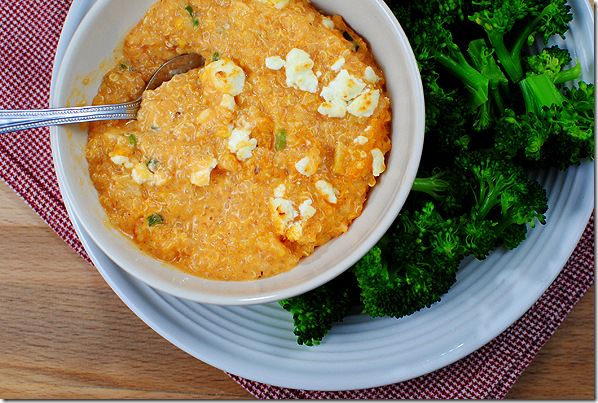 One Pot Red Beans and Rice