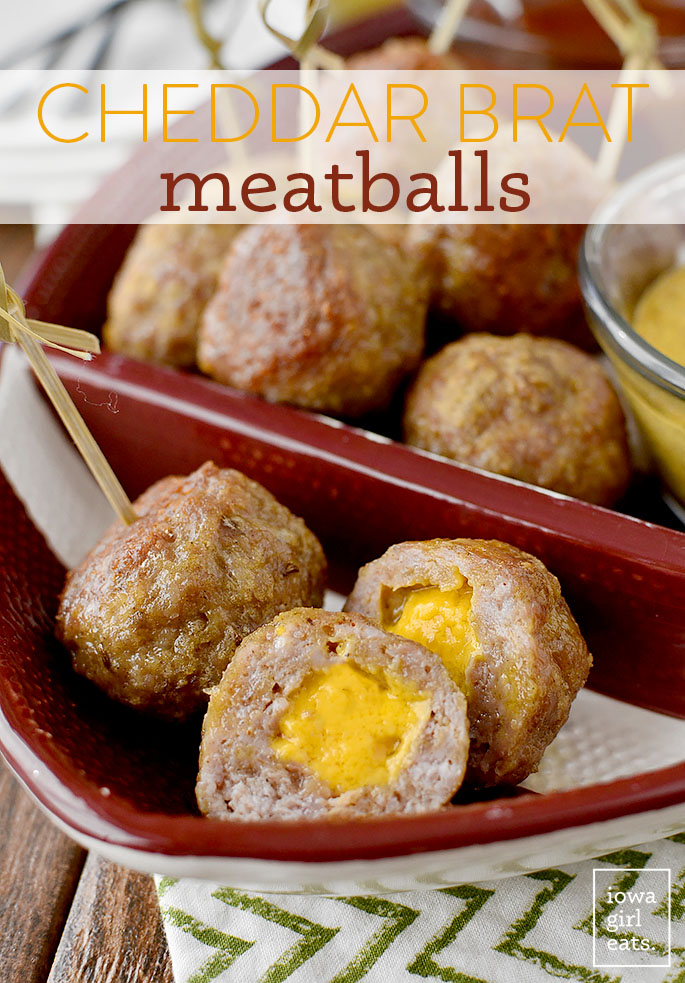 Have you ever been physically cut off from eating a food you love? Not like, “I just ate 400 Sour Patch Kids, someone take this bag away from me immediately! [grabs a goodbye handful before spouse rips the package from your death grip.]”  but like, a loved one has mercifully removed food from your reach to save you from yourself?

The place: parent’s back deck.

The person laying the smack down: my Mom. Let’s just say thank goodness my Mom was there to remove the brat platter from the table before any lasting damage was done. It was a real nail-biter.

Point of the story? I LOVE BRATS!! Maybe it’s a Midwestern thing, or maybe it’s a German heritage thing, but man oh man do I love me a snappy sizzling brat on a hot summer day. Seeing as how my grill is currently buried under 4 inches of snow, and many store-bought brats are either full of gluten and/or other funky stuff, I haven’t been able to squash my craving in several months, but all that changed when I created these homemade Cheddar Brat Meatballs with 3 homemade dipping sauces!

Where’s my Mama when I need her?! 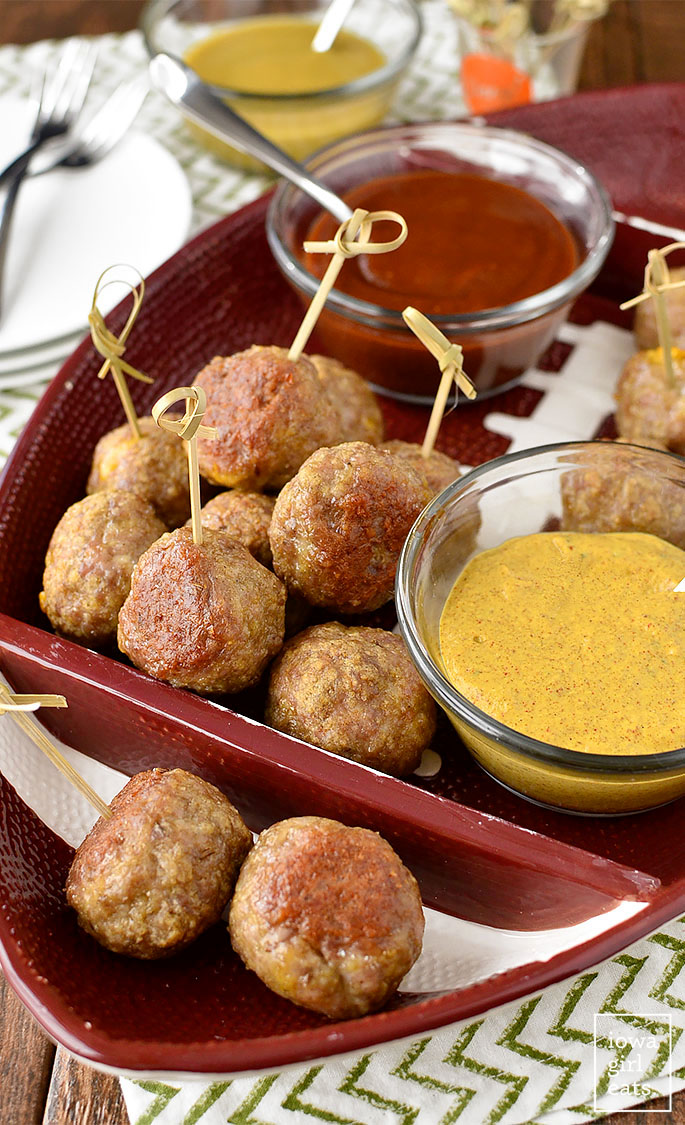 These meatballs were inspired by the Smoked Cheddarwurst I had at Butcher and the Boar last weekend, and created to be the shining star of your Super Bowl spread. I knew I wanted to recreate the flavors of that sensational cheddarwurst at home but wasn’t about to stuff sausage casings, know what I mean? What I COULD do, though, was mimic the flavors by stuffing bratwurst with cheese then rolling into meatballs. Easy enough, but what about the meat? Should I remove store-bought brats from their casings? Gross, no. Go a slightly different route and use Italian sausage instead? Mm, that wouldn’t do either.

Suddenly I had a lightbulb moment – I’d just make my own brat seasoning mix! Making homemade bratwurst at home is so easy, we’re talking ground pork mixed with everyday pantry spices, and the flavors are spot on. Ben popped an entire meatball into his mouth then gushed “that’s the hotness right there!” – and he wasn’t talking about the molten cheddar center. Ok maybe he was a little bit. Either way, I always know I’ve got a winner when Ben channels his inner hip hopster while describing a dish.

If you like brats, if you like cheese, if you like brats stuffed with cheese – you’re going to adore this easy recipe. I’m also sharing three delicious dipping sauces, each with three ingredients or less, that are a cinch to whip up, though classic yellow mustard is a perfect pairing too. Ooo, ooo – if you’ve a gluten-free beer that you like, keep the meatballs warm in a crock pot with said beer simmering with onions. TALK ABOUT THE HOTNESS! 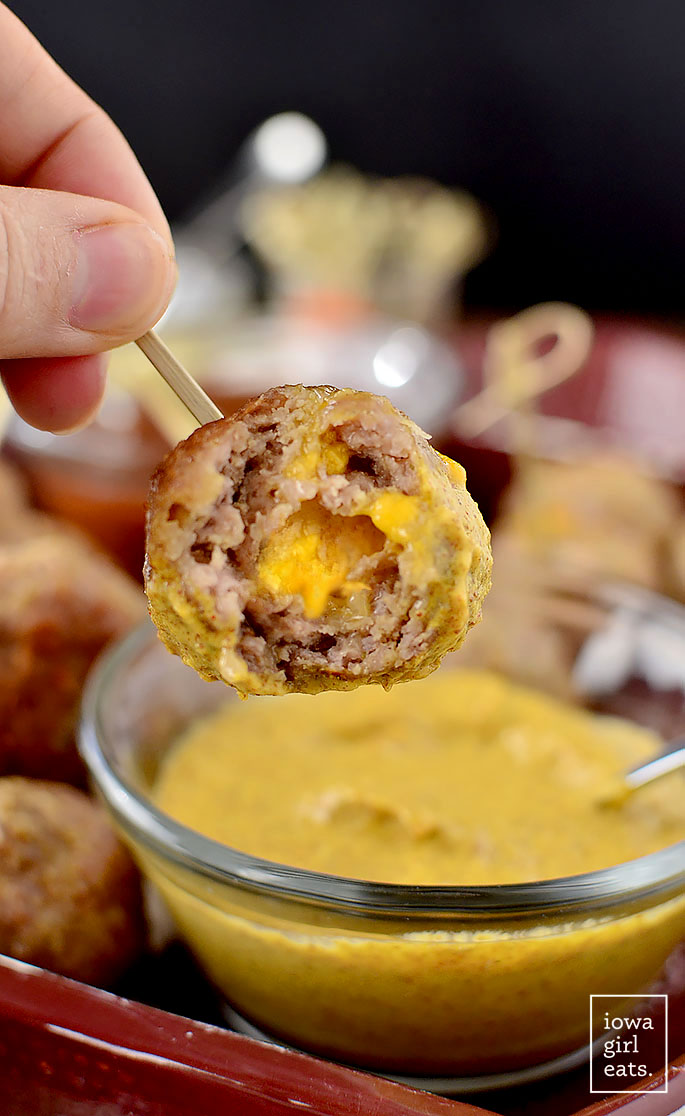 Like I said, this recipe could not be easier. Add 1lb ground pork, 1 whisked egg, 1/2 cup gluten-free bread crumbs (I like Rice Chex that have been pulverized in the food processor,) and a homemade bratwurst seasoning mix made with common ingredients found in your spice cupboard, into a large bowl then mix with your hands until everything is thoroughly combined. 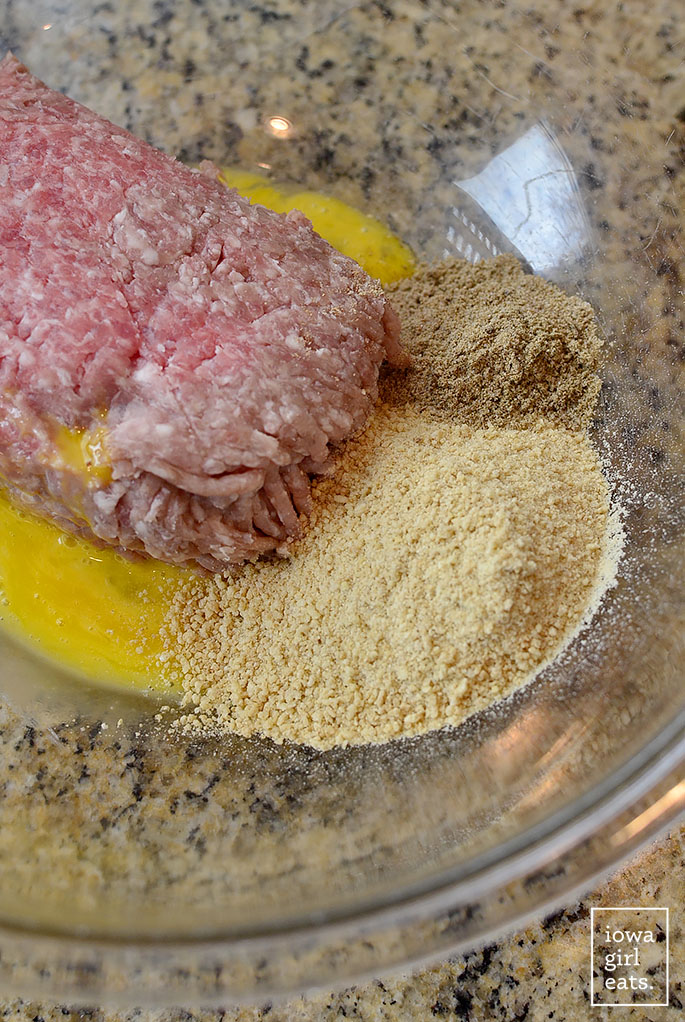 Next cut 16 cubes from 2oz cheddar cheese. What I did was cut off 1/4 of an 8oz block of cheese, slice it in half width wise, slice in half length wise, and then slice into quarters. You’ll see what I mean when you get there! ;) 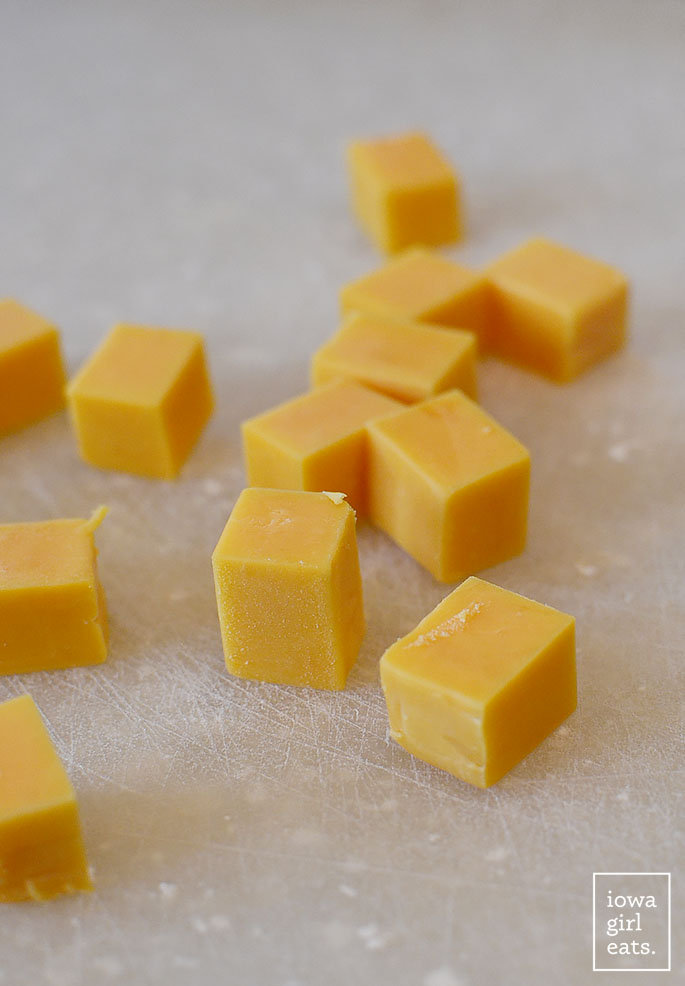 Divide the meatball mixture into quarters then form four balls from each quarter. Stuff a cube of cheese into each meatball then pinch to seal and roll into a ball with your hands.

Place the meatballs onto a foil-lined, nonstick-sprayed baking sheet then bake for 18-20 minutes at 400 degrees. 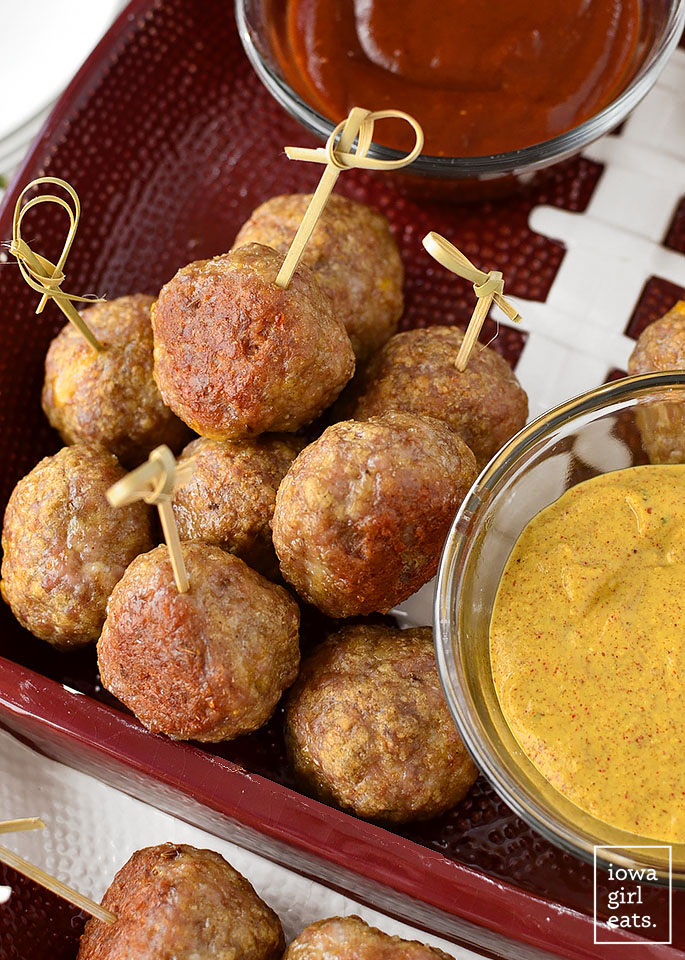 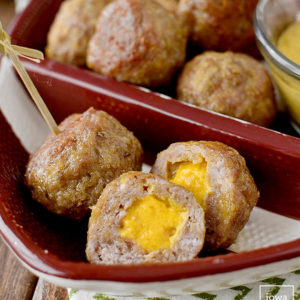 Like I said, each dipping sauce is made up of 3 ingredients or less, and they’re all fridge and liquor cabinet (muwahaha!) staples. This Bourbon-Dijon Dipping Sauce is just Dijon mustard combined with honey and bourbon. I want to take a bath in it. The Stadium Dipping Sauce is ketchup mixed with BBQ sauce and a little yellow mustard, while the Creole Mustard Dipping Sauce is even easier, calling for just spicy brown mustard and Creole seasoning. Try one, two, or heck, try them all! 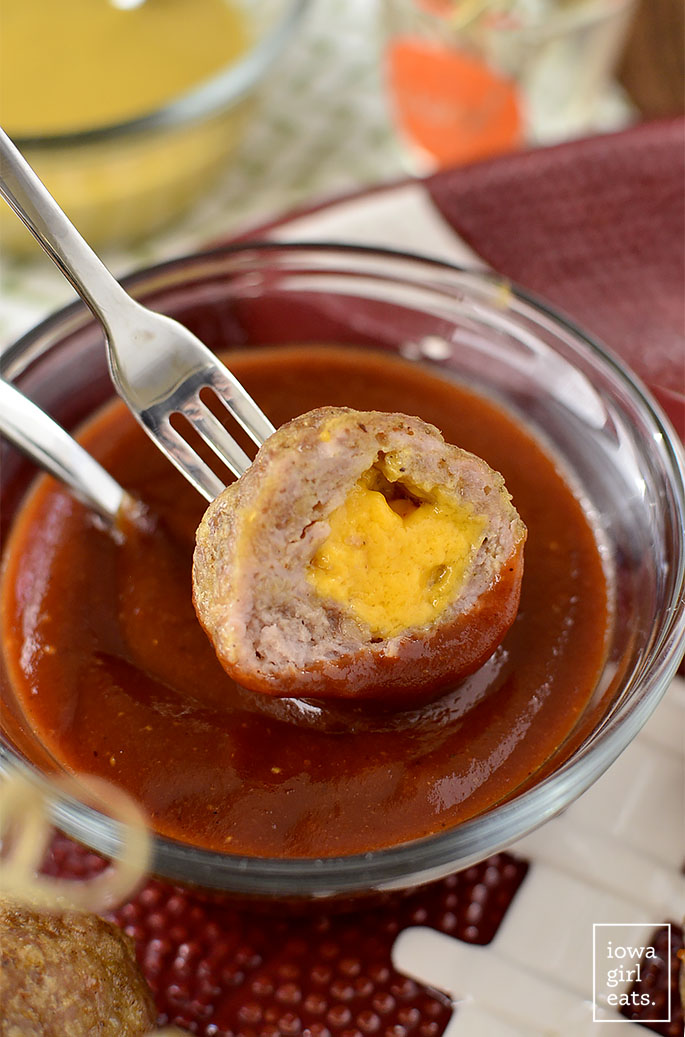 Best of all is the Cheddar Brat Meatballs and dipping sauces can all be made ahead of time. Roll the meatballs then cover and refrigerate overnight, and then pop into the oven during the pre-game show so they’ll be hot for kickoff. I know you’ll love these – enjoy! 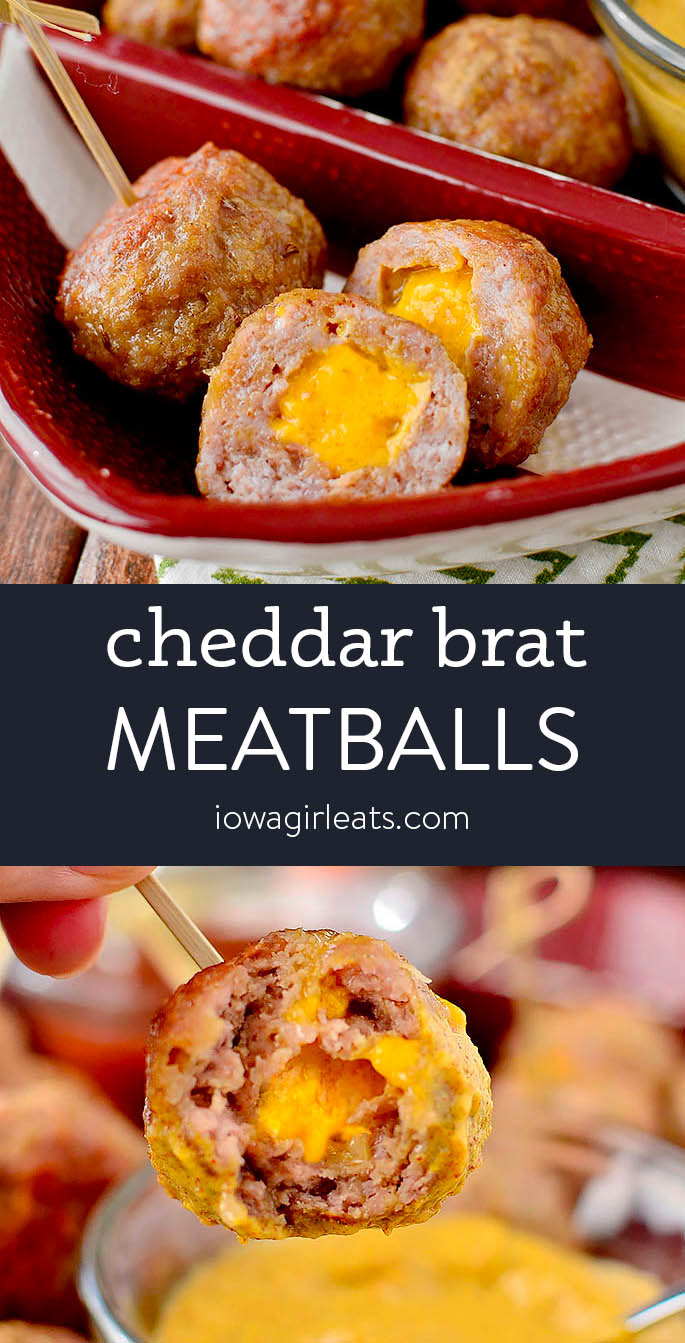