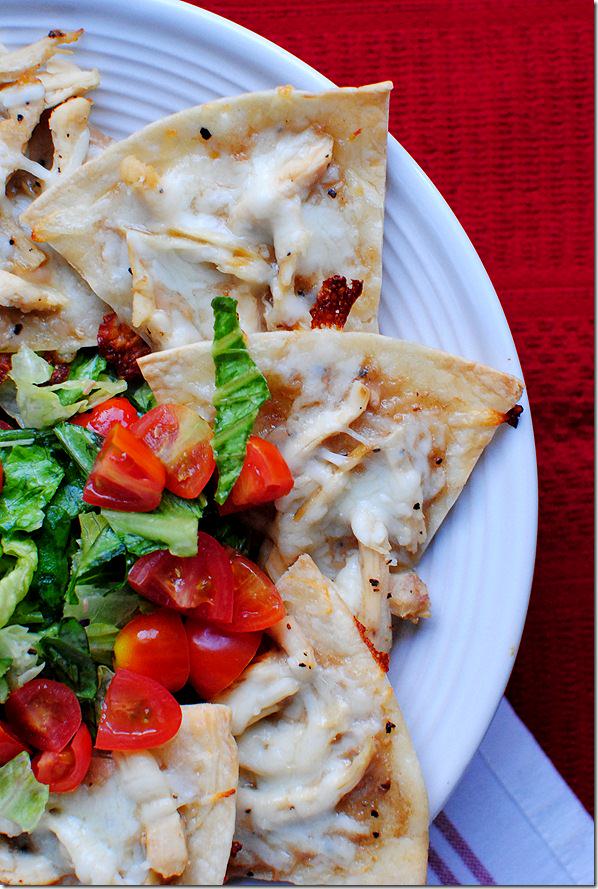 One of Ben’s and my favorite restaurants in town is Granite City Brewery. From cinnamon rolls as big as our heads, to ultra-refreshing seasonal blueberry brew, we always know we’ll have a great meal and drink whenever we stop by.

One of the items we’ve grown particularly attached to is their Chicken Caesar Chalupa appetizer.

Baked flour tortillas are brushed with Caesar dressing, topped with shredded chicken and mozzarella cheese, then baked. They’re served with an ice-cold Caesar salad and chopped tomatoes for scooping, and are the epitome of refreshing and satisfying. Imagine our horror when we stopped in a few months ago and found out the Chicken Caesar Chalupas had been taken off the menu!? Noooo! 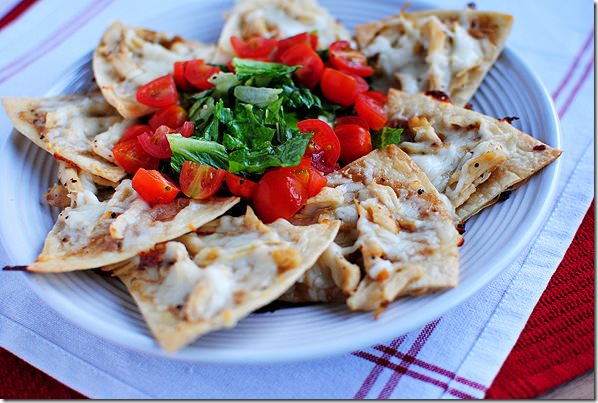 Right then and there Ben and I vowed to recreate the crispy app at home. 3+ months later (…) we finally got around to it, Baked Chicken Caesar Chalupa Nachos, people. These. babies. ROCK! One of our favorite restaurant recreations ever! 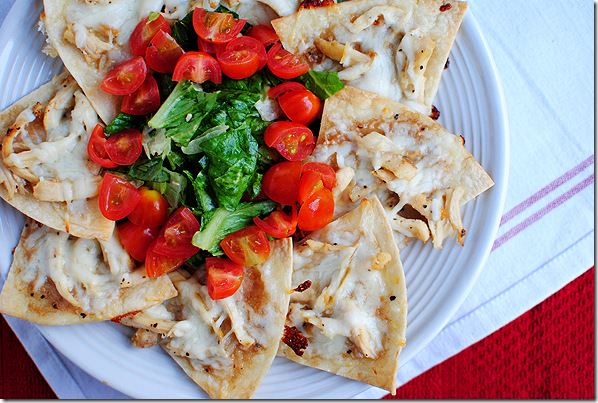 Start by sauteing a couple chicken breasts seasoned with lemon pepper in non-stick spray until cooked all the way through. 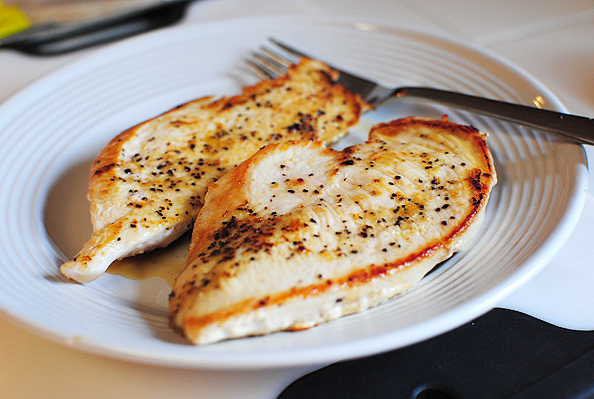 Once they’re cool enough to handle, shred the chicken with your fingers or a fork, and set aside. 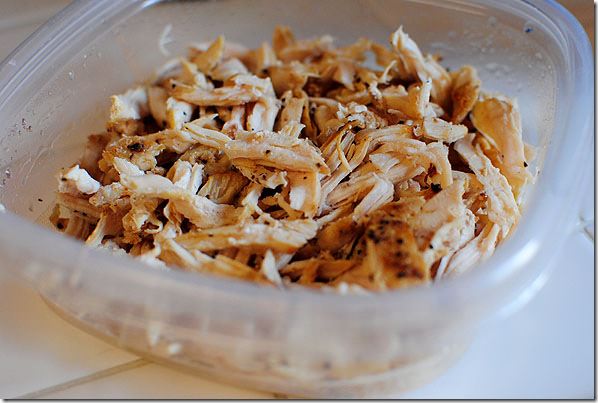 Next, take a few burrito-sized flour tortillas and cut each one into 8 wedges. 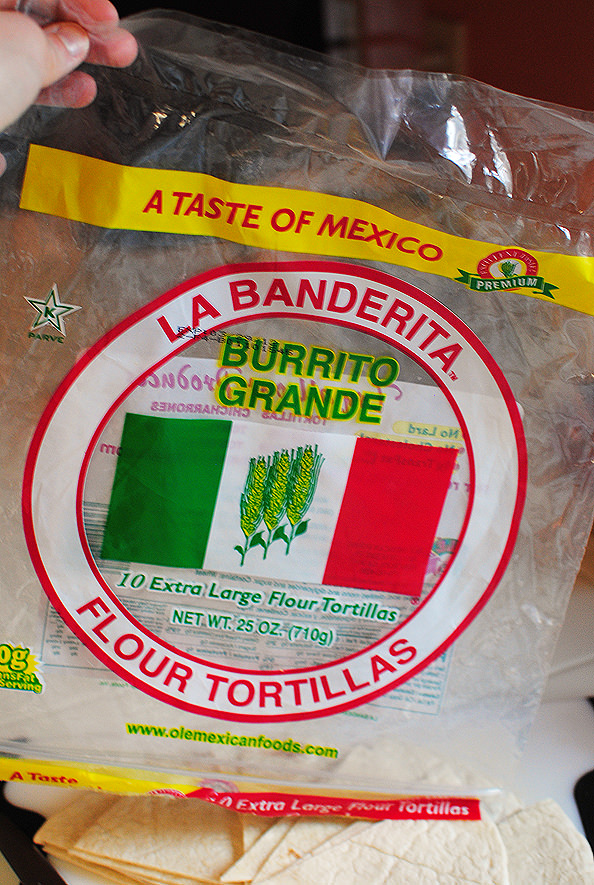 These are extra-large, because that’s how Ben likes his breakfast burritos, but the normal sized ones will totally do. 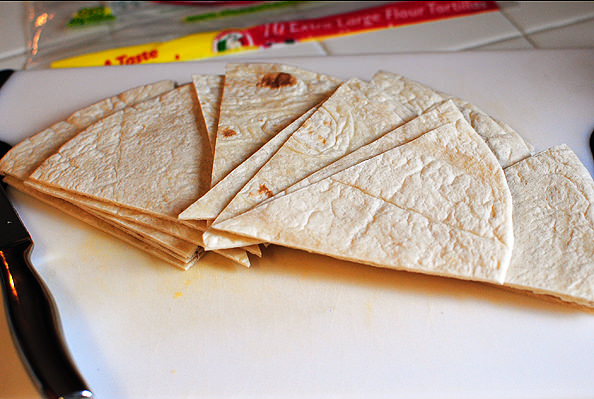 Tip: Look for tortillas that are slightly “fluffy” looking, as opposed to the ones that are very flat. The layers in the fluffy tortillas mean they’re sturdier and will hold up better to being baked with yummy toppings. 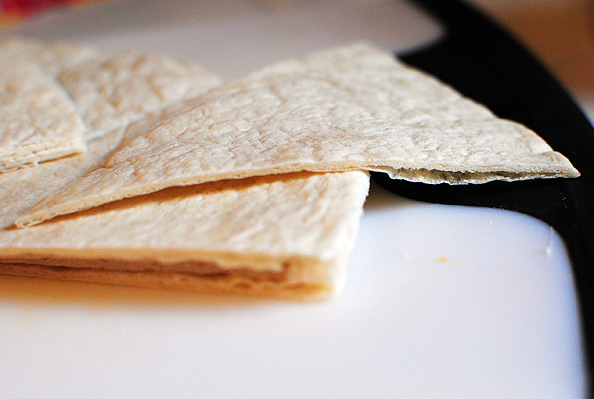 Once all the tortillas have been cut into wedges, lay them on foil-lined and non-stick sprayed baking sheets. 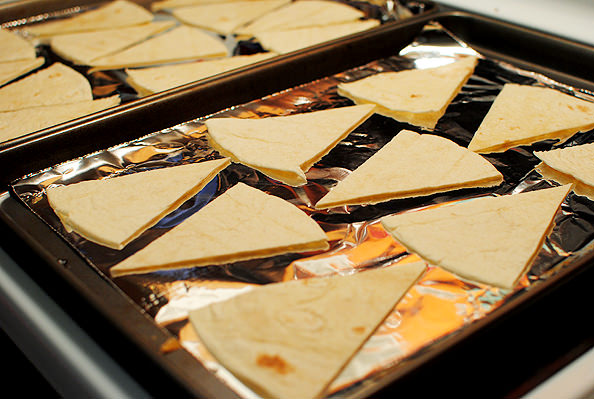 Spray the tops with more non-stick spray, then bake at 400 degrees until they’re lightly toasted and just starting to turn golden brown. Tip: You can do this ahead of time! Just let the wedges cool completely before putting them in an air-tight container for a couple days. 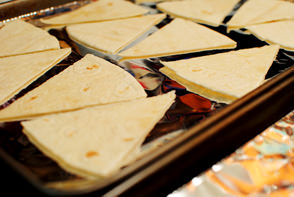 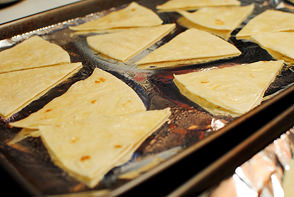 Alright, here comes the fun part – piling on the toppings! 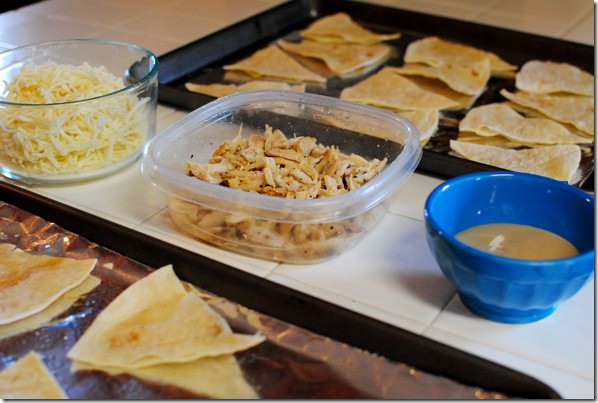 First top each wedge with about 1 teaspoon Caesar dressing. 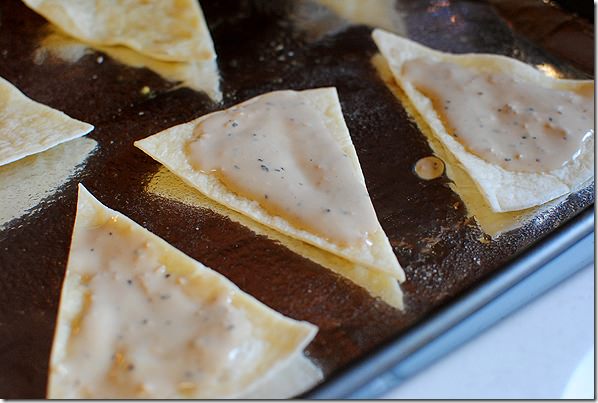 I heart Brianna’s Asiago Caesar, but feel free to use whatever’s your fave. 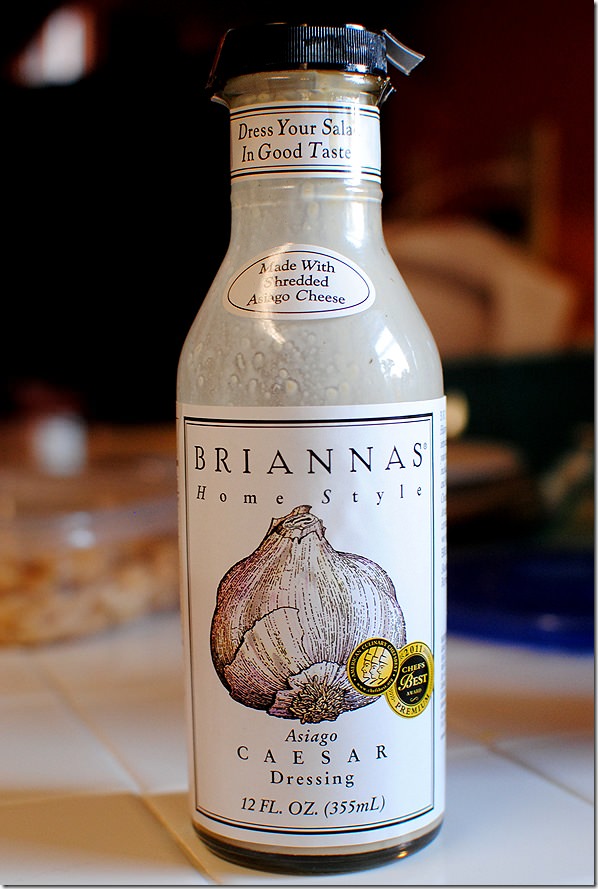 Next add on a little bit of the cooked & shredded lemon pepper chicken. 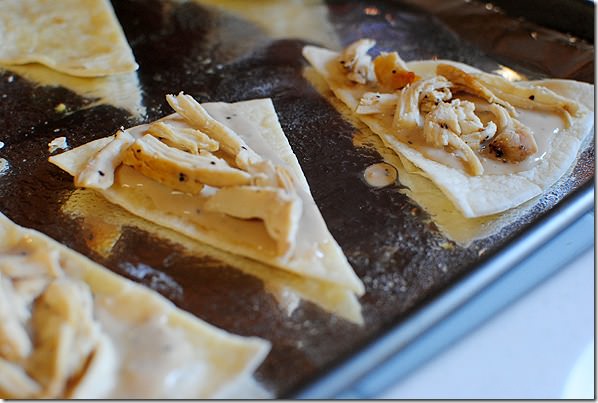 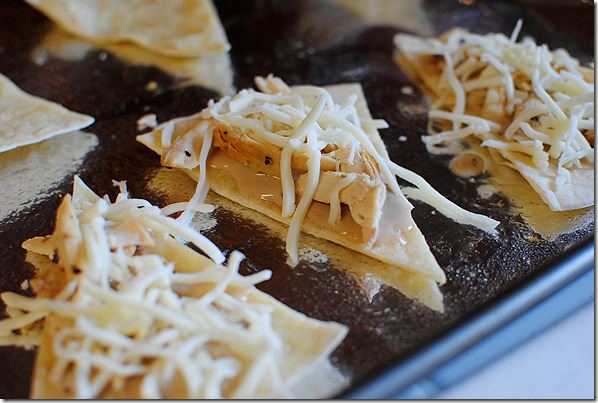 Put the wedges back into the 400 degree oven for 4-5 minutes, or until the tortillas are golden brown, and the cheese is melted. YUM!!!! 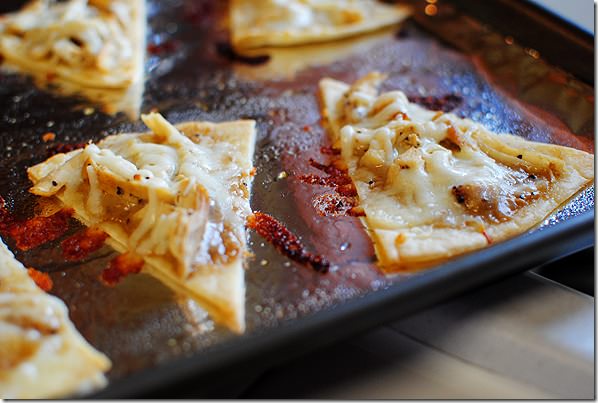 Lay the wedges around crunchy romaine lettuce that’s been cut into bite-sized pieces and tossed with a little more Casesar dressing, then sprinkle chopped, fresh tomatoes around the outside! 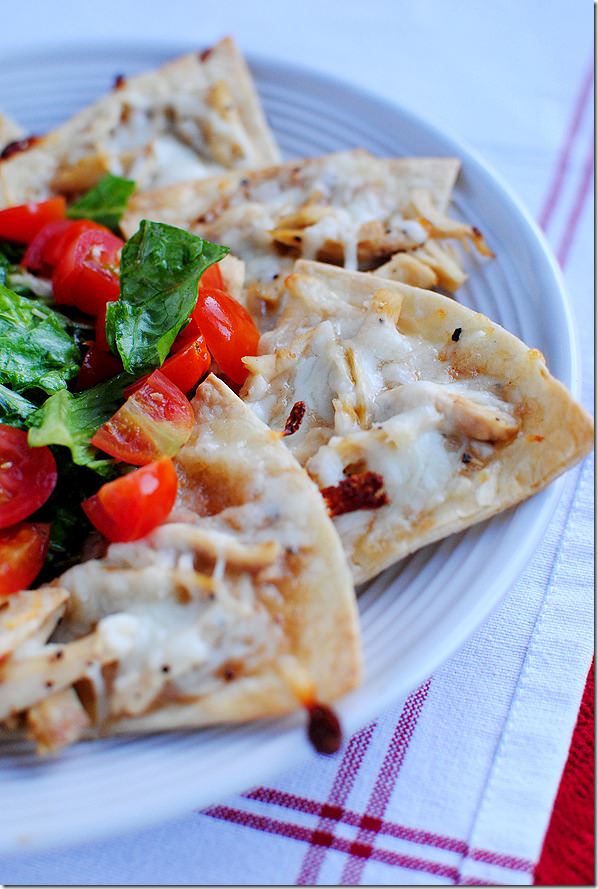 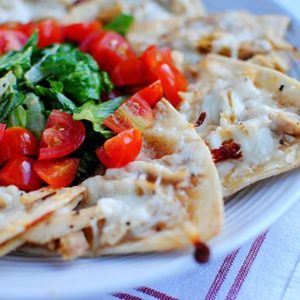 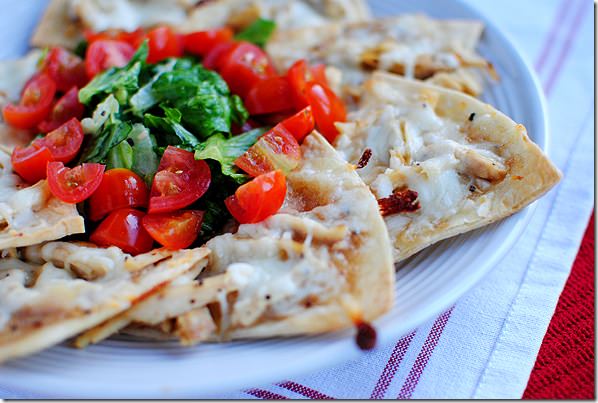 Chicken Caesar Chalupas would be awesome as a starter for a dinner party, or a fun entree for 2 or 3. I hope you’ll give them a try! 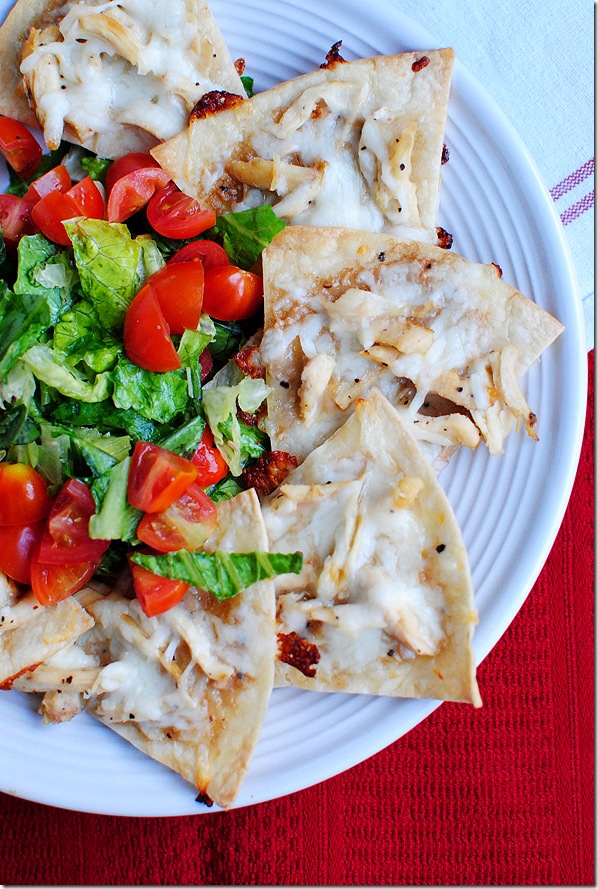