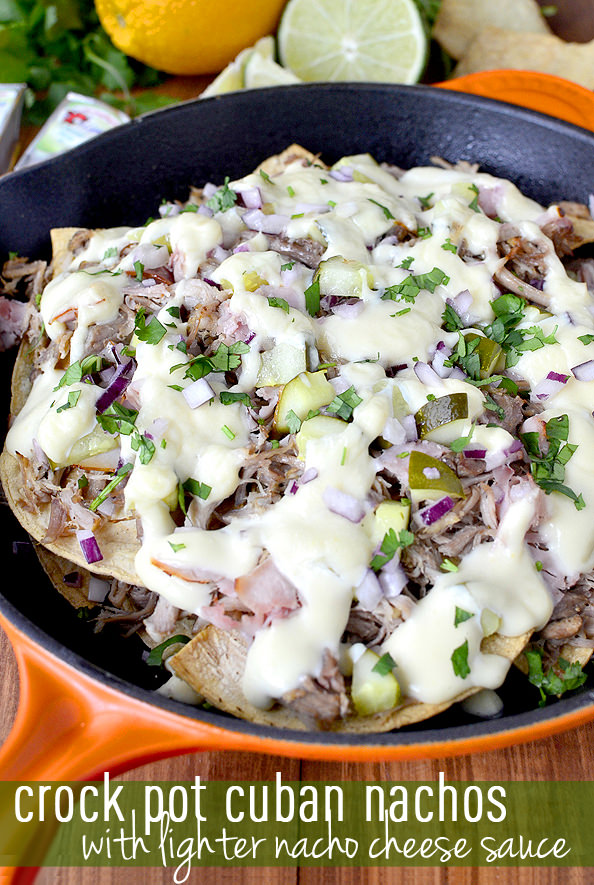 Next month is pork month for Join My Journey (Iowa is the largest pork producing state in the country!) so to prepare I was able to visit one of my favorite BBQ joints in central Iowa a few weeks ago that pays homage to the pig unlike any other. Jethro’s!

I’ve documented Ben’s and my trips to Jethro’s countless times on the blog – their pulled pork is to die for  – so you can imagine how excited I was to go behind of the scenes and see how the largest independent purchaser of pork in the state does their thang, so to speak. I even forced the owner to take a picture with me on my iPhone. Can you say starstruck? Anyway, to say I left inspired is an understatement. Check out the Join My Journey blog to read all about my visit!

In the meantime, as I mentioned, I left inspired to cook some pork. The day after my visit I purchased a couple thick-cut Iowa chops to throw on the grill, and then decided to develop a serious nacho recipe using not one, but two types of pork. Crock Pot Cuban Nachos with Lighter Nacho Cheese Sauce is a serious nacho connoisseur’s nacho. Amateurs need not apply!

But seriously do. These babies are ridiculous. Look at that cheese sauce!!! 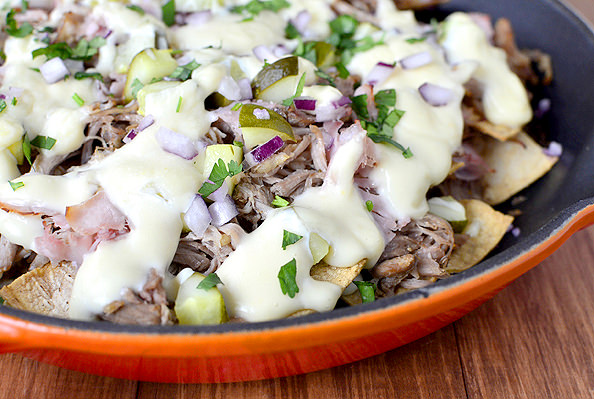 Cuban-spiced pork is slow cooked in citrus juice then shredded and piled high atop homemade tortilla chips. Cuban sandwich-inspired ingredients like chopped deli ham, chopped pickles, red onion and cilantro join the party then the whole thing is absolutely smothered in a a rich and luxurious creamy nacho cheese sauce that is way, way lighter than traditional cheese sauce. Like I said…ridiculous!

Speaking of creamy nacho cheese sauce, the water park we visited last weekend had a food stand akin to most water park food stands, stocked with candy, pop, and dunh dunh dunhhhhh nachos. With that radioactive-colored orange cheese sauce. So good it hurts. Literally. I don’t think there’s a smidgen of room left for real cheese amongst all the chemicals in the stuff, but wow, don’t we all have great memories of digging into a big plastic clam shell of nuclear nachos at the pool in the summertime, half the chips falling apart before they reached the cheese because they got all wet from your dripping, pool-soaked fingers? I sure do.

Anyway, after spying the nachos at the water park I was inspired to create my own nacho cheese sauce using The Laughing Cow Light Creamy Swiss cheese wedges. Best decision of my life. I cannot tell you how thick, creamy and decadent this cheese-sauce was. I am captial O-bsessed. You will be too.

Now, Crock Pot Cuban Nachos with Lighter Nacho Cheese Sauce ain’t diet food, but lets look at the facts. We baked our own tortilla chips instead of using store-bought, fried chips, and made our own creamy nacho cheese sauce vs using cheez whiz, or whatever the heck they call that stuff. That’s good enough for me! 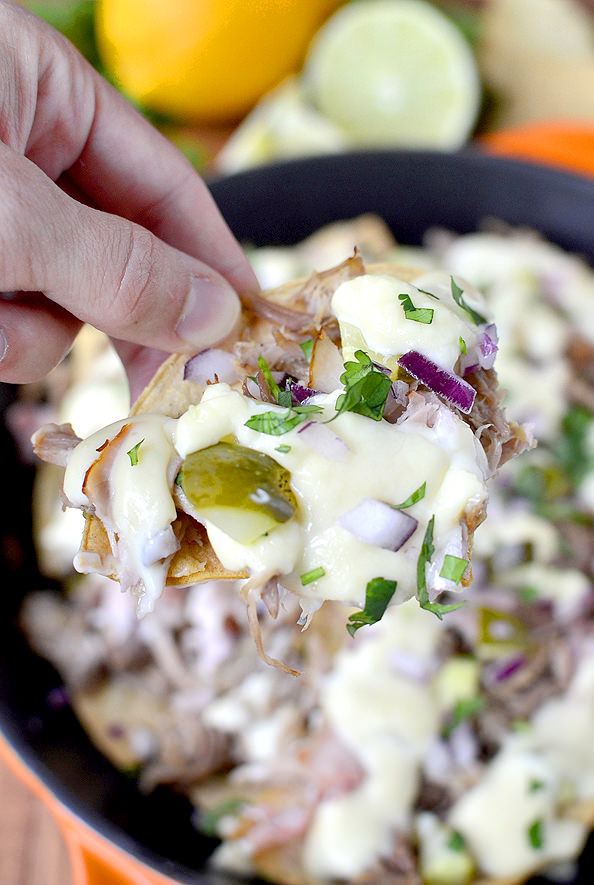 Start with a 1-1/2 – 2lb boneless pork butt (also called pork shoulder.) I bought a 4lb roast then cut it in half and froze the other half for another day. Trim the pork of any large pieces of excess fat then cut into big hunks and place inside your crock pot. I used a 6-quart crock pot but you can use a smaller one for this recipe. 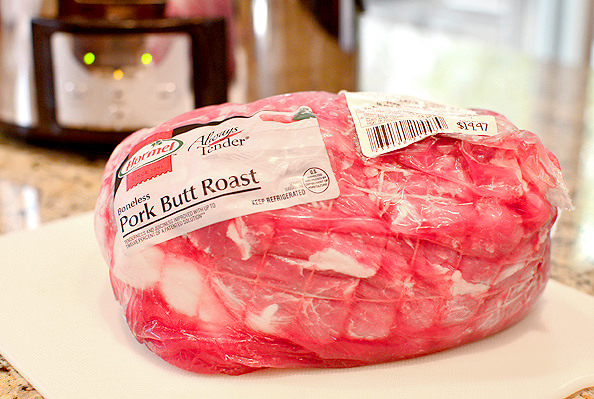 To the pork add 1-1/2 teaspoons salt, 3/4 teaspoon each dried oregano and cumin, 1/2 teaspoon pepper and 4 smashed then peeled garlic cloves. 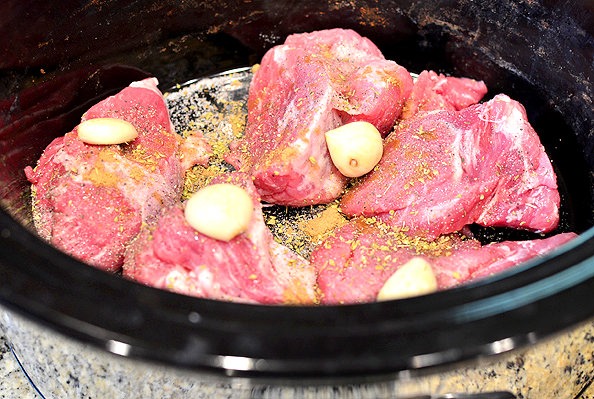 Next add the juice of 1 lime and 1 orange. Lift up each piece of pork to make sure some of the juices run underneath. 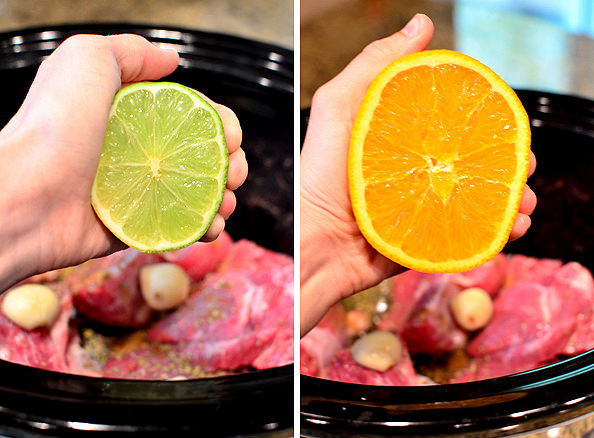 Pop a lid on top then cook on low for 5-6 hours or until the meat shreds easily. Shred then measure out 2 cups to use for the nachos and then refrigerate or freeze the rest. You shouldn’t have too much leftover though – especially after all the nibling you’ll be doing while you shred it up. The flavors in this  juicy pork are incredible. 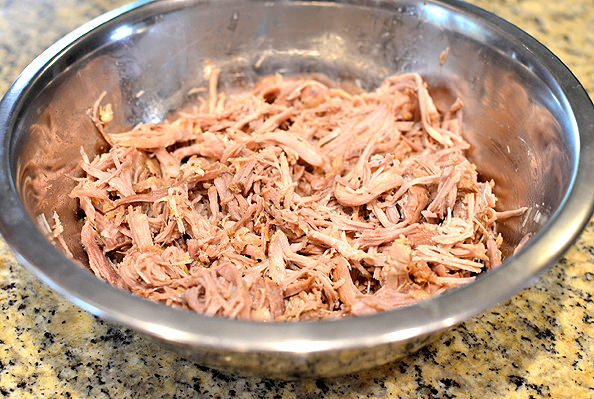 When the pork has about 30 minutes left to cook, stack 6 corn tortillas on top of each other then cut into quarters with a sharp knife. 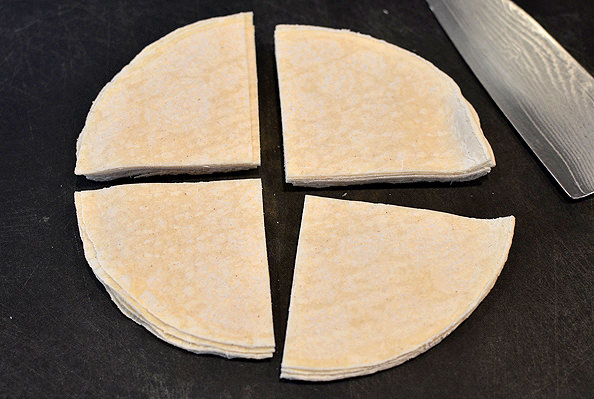 Place the quarters onto two baking sheets then spray the tops with nonstick spray, sprinkle with salt, then bake at 400 degrees for 8-10 minutes or until golden brown, rotating the pans halfway through. You can absolutely make these chips ahead of time – just let them cool completely before storing in an airtight container. 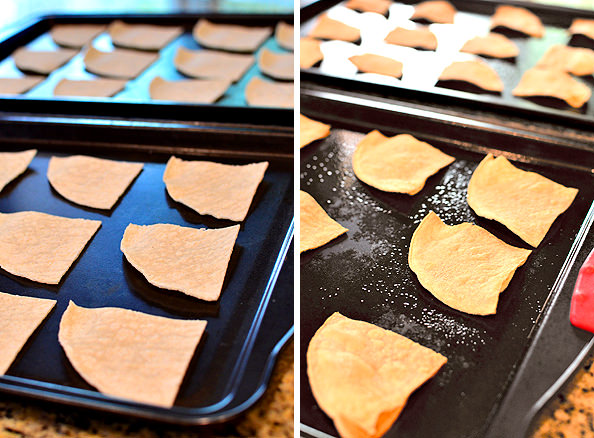 Finally, make the lighter nacho cheese sauce. The star of the dish, in my opinion! Swiss cheese is traditionally used in the Cuban Sandwiches these nachos are based on, so of course I used the The Laughing Cow Light Creamy Swiss cheese wedges. A whole wheel, aww yeah. 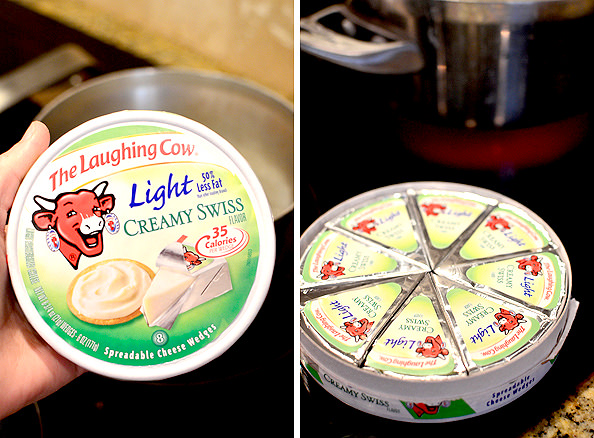 Start by scalding 7 Tablespoons milk in a small saucepan over medium heat (that means heat until just before boiling) then add 1 cheese wedge at a time, smashing with the back of a spatula to help incorporate it into the milk. It helps to break the wedges up into a few hunks before adding.

Now, the cheese won’t fully melt right away, it will kind of break up into little pieces, but just keep smashing and stirring. The sauce will come together around the 6th wedge and it will be truly glorious! After the eighth wedge, switch to a whisk and whisk until smooth. 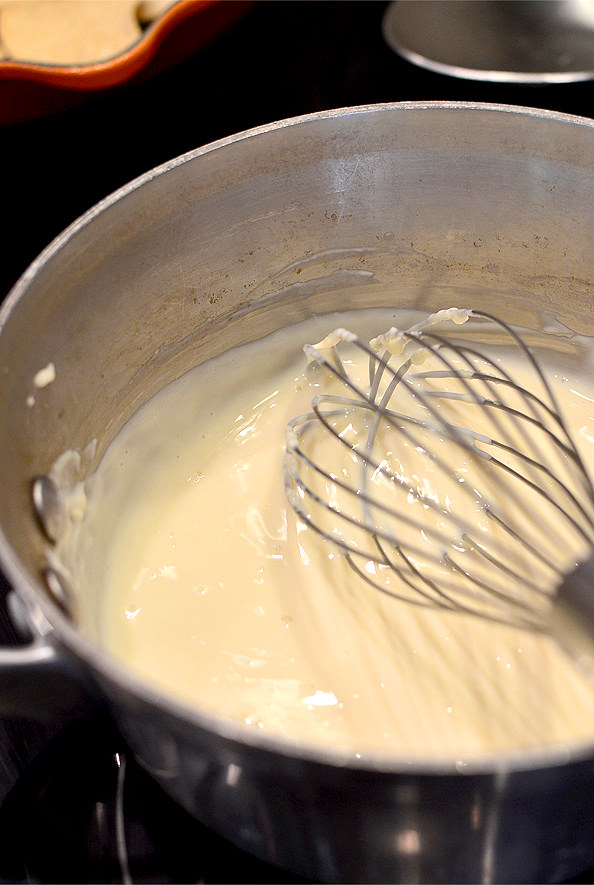 Mustard is also a typical condiment on Cuban Sandwiches, so whisk in 1/4 teaspoon dried/ground mustard after all the cheese is incorporated. If the sauce is too thick for your liking at this point, add 1 additional Tablespoon milk. I didn’t need it but you might. 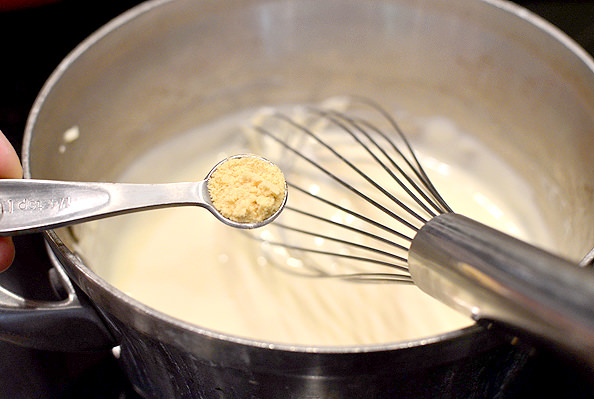 Assembly time! Layer half the baked tortilla chips in the bottom of a 12″ skillet then top with 1 cup shredded pork, and 1/4 cup chopped deli ham. You won’t be baking the nachos so if you don’t have a skillet, no sweat. Just assemble on a plate or platter. I just think the skillet makes ’em look festive. 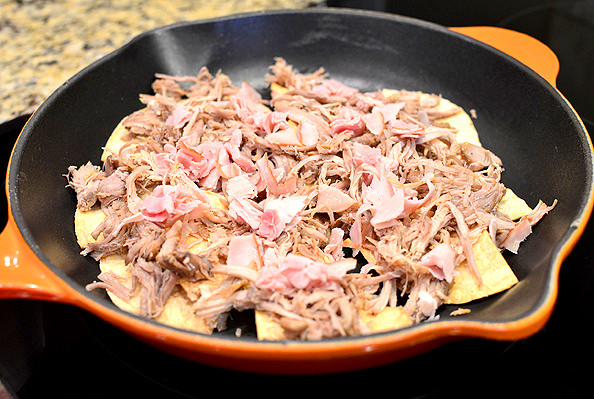 Next layer on 1 chopped pickle spear, lots of chopped red onion, and half the cheese sauce. 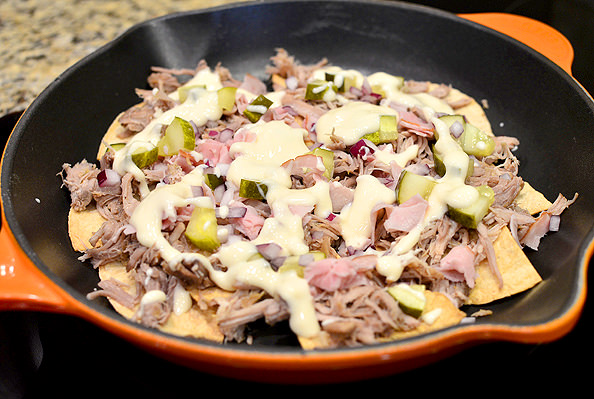 Repeat the layers one more time then top with 1/4 cup chopped cilantro and DIG IN!! 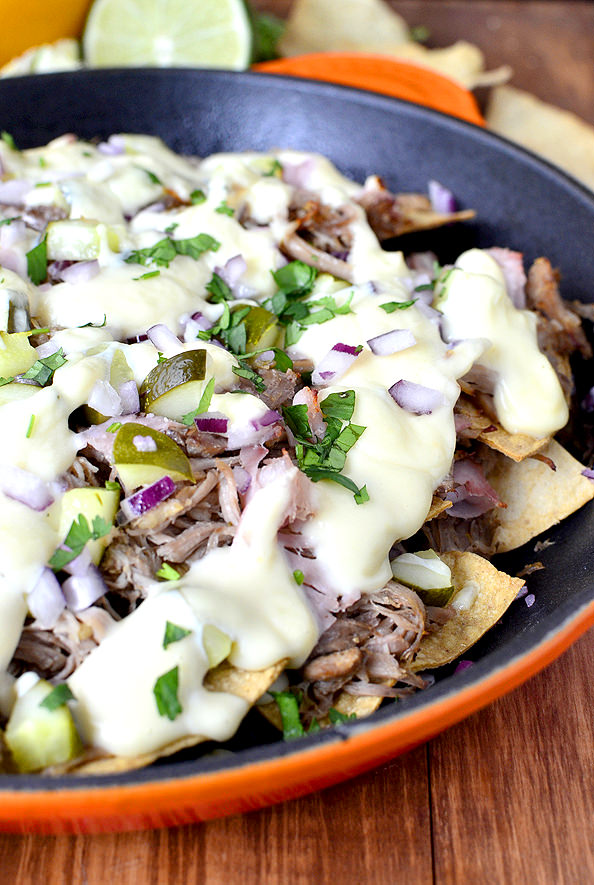 serves 3 as an entree, 6 as an appetizer

These nachos are easy enough for everyday, but festive for a party. Bust out a big ol’ platter at your next card night (do people still do card nights?? I want an invite…) and watch your guest’s eyes light up. I know mine would. Enjoy! 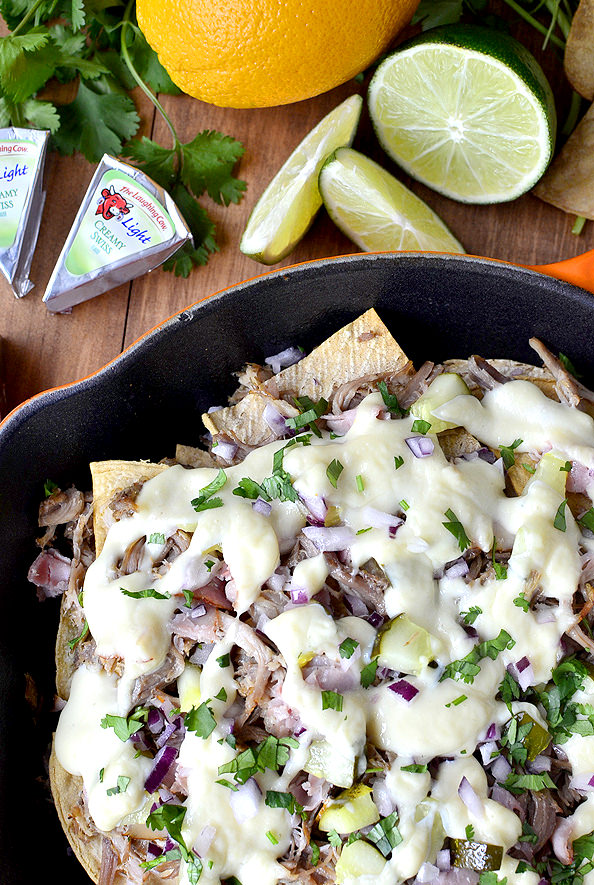 If you like the looks of these nachos, check out my Hawaiian Pulled Pork Skillet Nachos with Pineapple Guacamole!

I am an official spokesperson for The Laughing Cow® in 2014. While I receive compensation for participation as a brand advocate, opinions are my own. 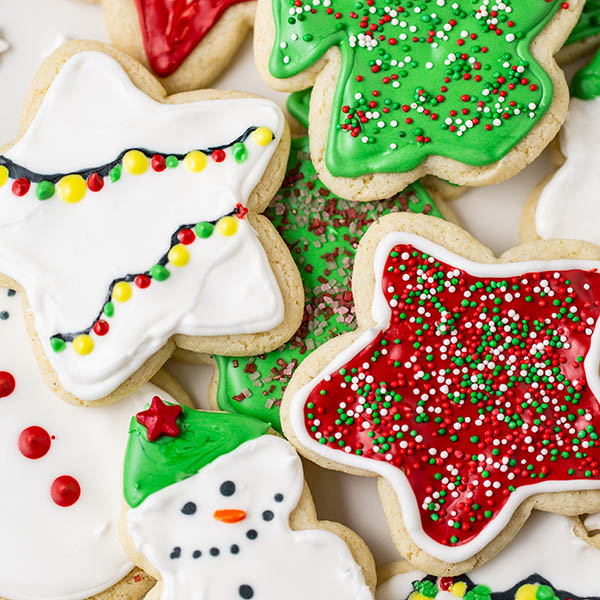