Easy Chicken, Chorizo and Shrimp Paella is a gluten-free, 1-skillet dinner recipe that's simple yet anything but ordinary. 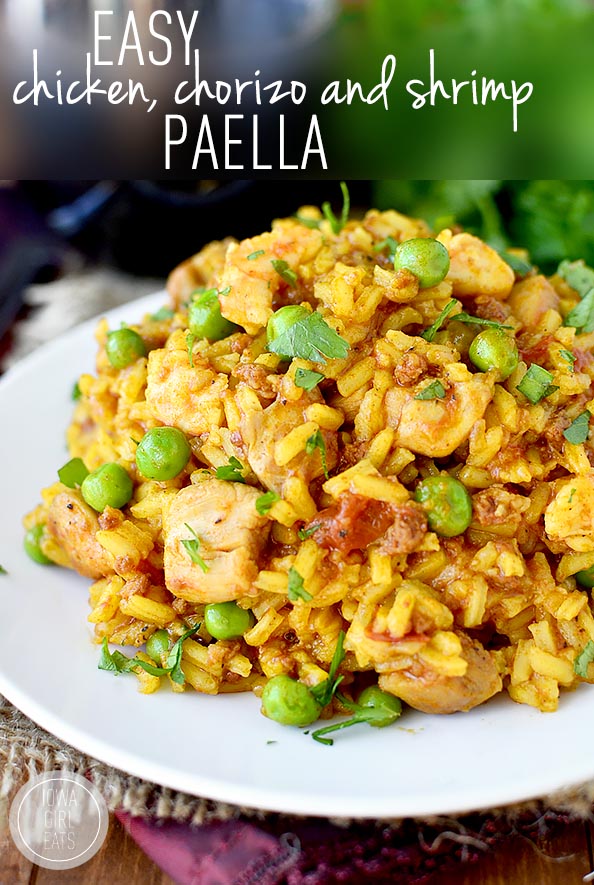 A couple weeks ago I made Easy Chicken, Chorizo and Shrimp Paella at home. Not because I recently had it at a fun restaurant, or because I had a great story behind the recipe – I simply wanted to make Paella because I’ve never made it before. HA! I thought it might be complicated, but to my surprise, Paella is inherently easy! 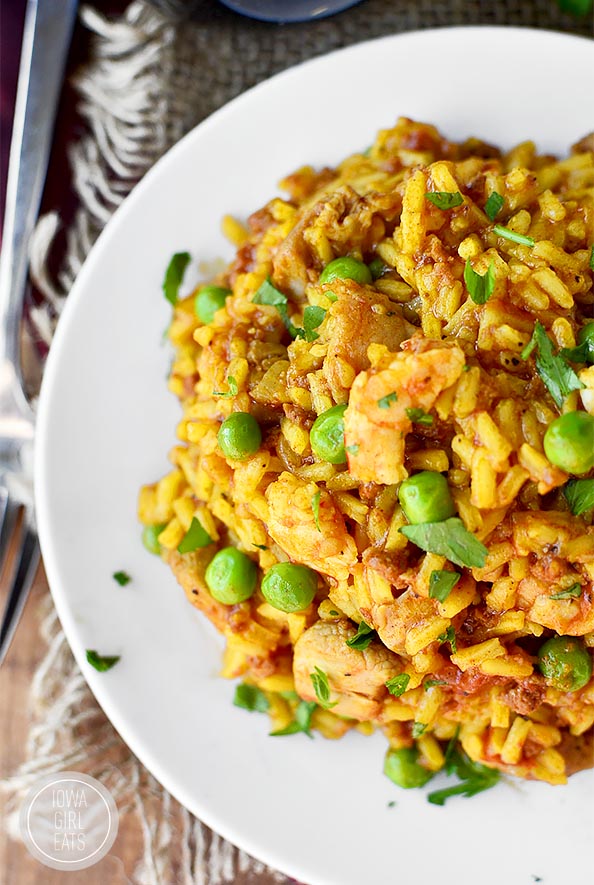 First things first, what is Paella? Paella is a rice-based dish that hails from Valencia, Spain, and is named for the pan that it’s traditionally cooked in, a Paellera. Recipes vary from region to region, and person to person, and can include meat, seafood, and vegetables – the amounts and types are up to the cook.

Although I don’t own a Paellera, lucky for me and you a big skillet will work instead, and the ingredients we’ll throw inside, while fantastically full of flavor, are easily found at the grocery store. Chorizo, chopped chicken thighs, and onions are sauteed with shallots, garlic, and tomatoes then simmered with long grain rice in a saffron-infused broth. The dish is finished by stirring in chopped shrimp and sweet peas that are gently cooked by the residual heat from the pan.

This Paella is fresh, filling, full of tongue-tingling Spanish flavor, and yet, so easy. After the prep work of chopping a few ingredients, the dish came together in under 30 minutes and in just one pan. Take my word for it – different doesn’t have to mean difficult. 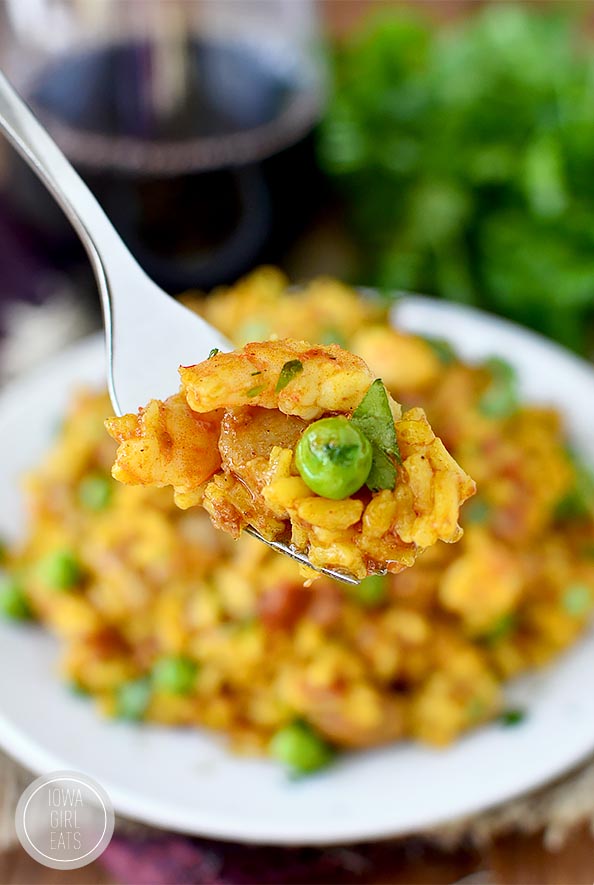 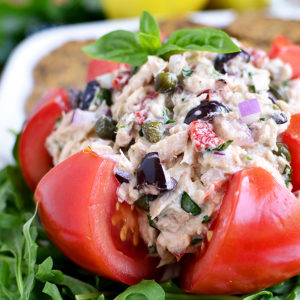 Start by bringing 2-1/2 cups chicken broth to a boil with a pinch of saffron then place a lid on top and turn the heat to low to keep hot. 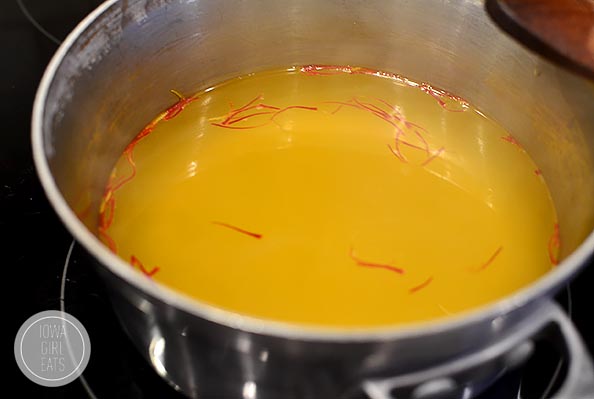 I feel saffron is the ingredient in Paella that makes it Paella and not “rice, meat, and vegetables.” In all my research before making this dish I read again and again that you simply cannot leave it out, and there is no substitute. After making Paella, I have to agree. To me, saffron smells like the sea while Ben thinks it has floral notes. The point is, it’s a special ingredient that’s unique and fun to cook with! It adds a flavor you can’t compare to any other, and a little goes a long way. 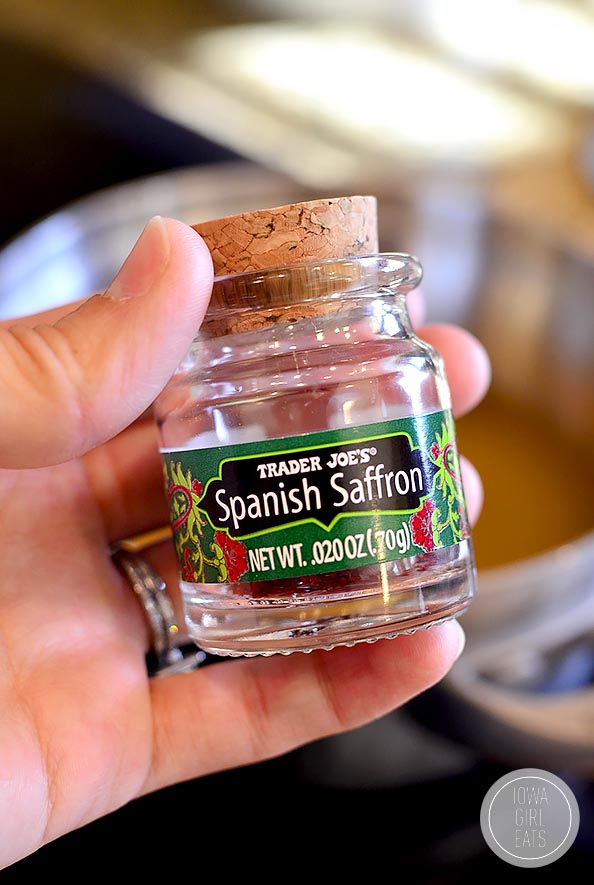 Saffron has had the reputation of being difficult to find, and costing an arm and a leg if/when you finally found it, but I got this jar at Trader Joe’s for $5.99 and saw it at my regular grocery store, too. 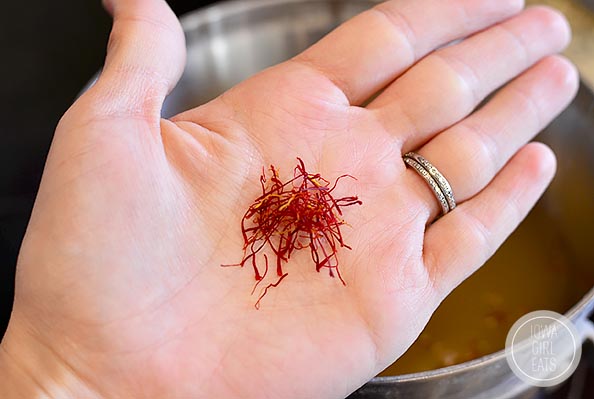 While the saffron and broth are coming up to a boil, chop 2 boneless, skinless chicken thighs into bite-sized pieces. In the spirit of trying something new, give chicken thighs a chance if you’ve never cooked with them before. Chicken thighs are buttery and delicious, and are usually about half the cost of chicken breasts. 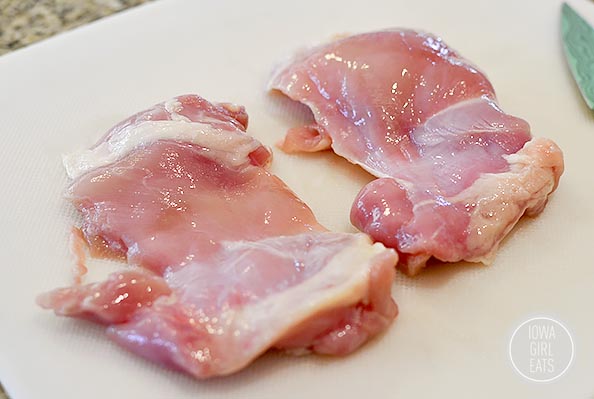 Add the chicken to a large skillet with a drizzle of extra virgin olive oil, 1 chopped shallot or small onion, and 6oz Mexican chorizo then season with salt and pepper and saute until the chicken and chorizo are cooked through. 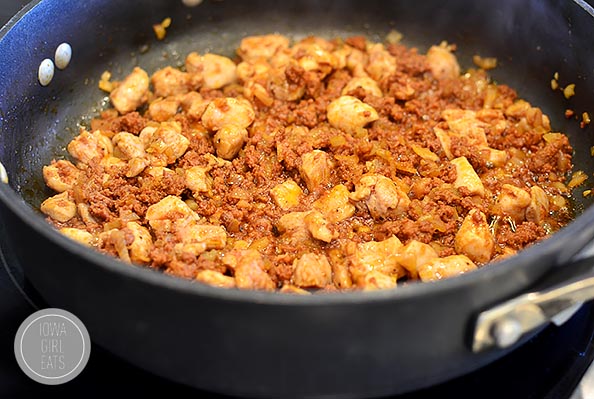 Traditionally Spanish chorizo, a dried, cured sausage, is used in Paella, though I used Mexican Chorizo, a ground, uncooked sausage. Both contain spices like paprika and garlic, but I used Mexican Chorizo because, well, I like it! We use it a lot at home for egg and hash brown skillets, plus it’s easy to find (I find this brand near the specialty Mexican cheeses at the store,) and gluten-free. 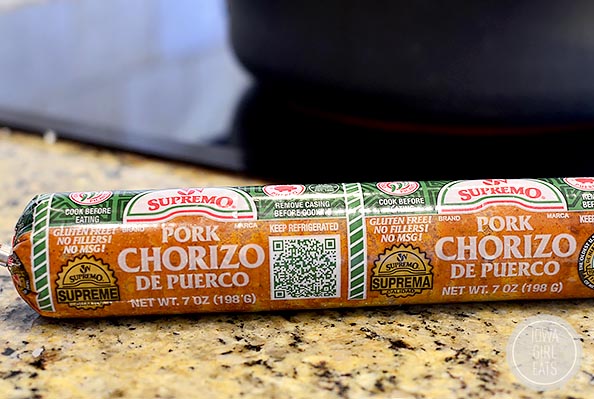 Once the meats are cooked through, add 3 cloves minced garlic and saute for 1 minute, then add 2 chopped vine-ripened tomatoes, 2 teaspoons paprika, and a dash or 10 of cayenne pepper (optional.) Saute for another 3-4 minutes, or until the tomatoes are tender. 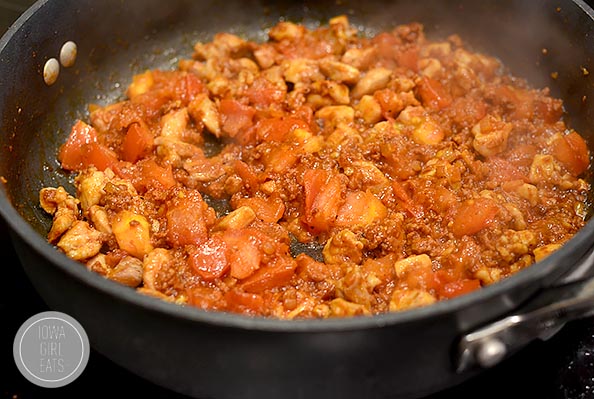 Next add 1 cup long grain white rice then stir to combine with the other ingredients. 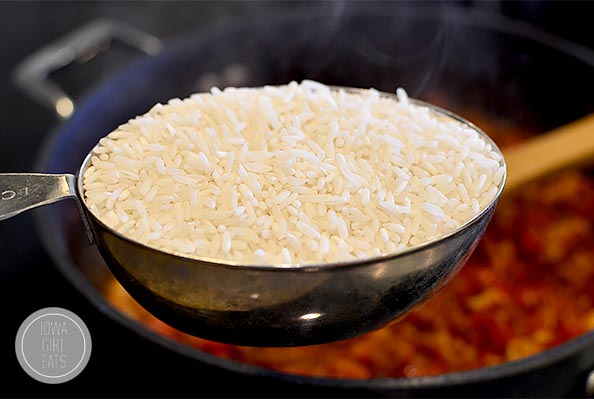 Carefully pour the hot saffron-infused chicken broth into the skillet then bring the mixture to a boil (should happen almost instantly.) Place a lid on top then turn the heat down and simmer until nearly all the broth has been absorbed and the rice is al dente. 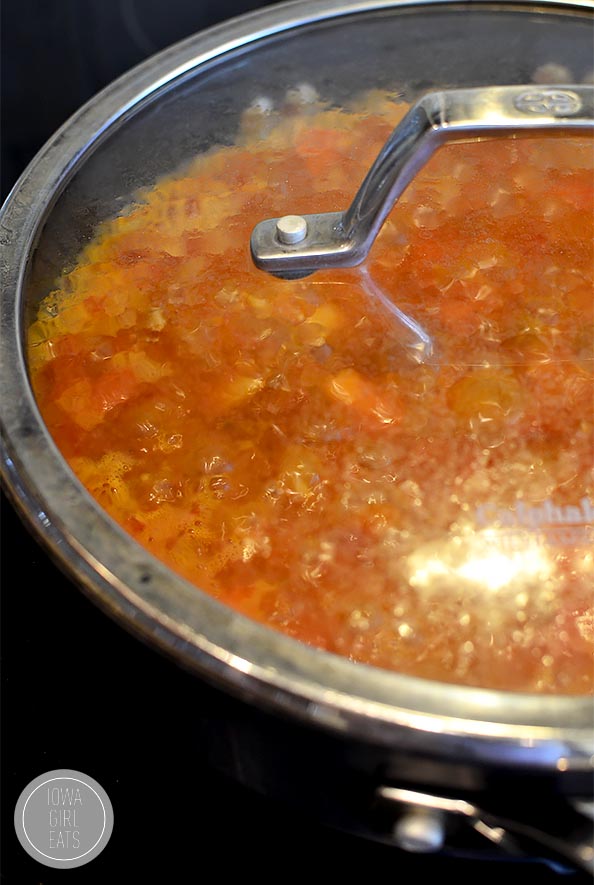 Finally, add 6oz chopped peeled and deveined shrimp and 1/2 cup frozen peas then stir to combine, place the lid back on top, and let the skillet sit off the heat for 5 minutes to cook the shrimp through. 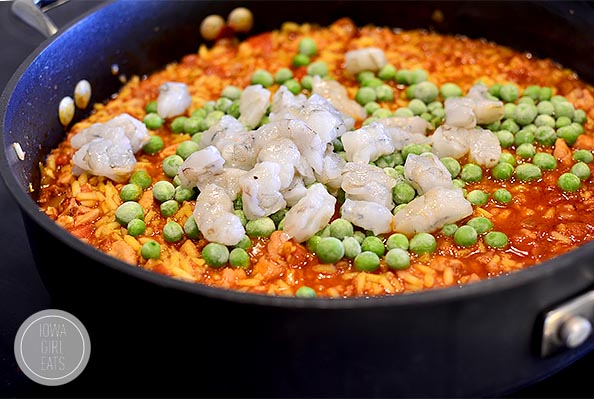 Taste then add salt and pepper if necessary, then scoop and serve! 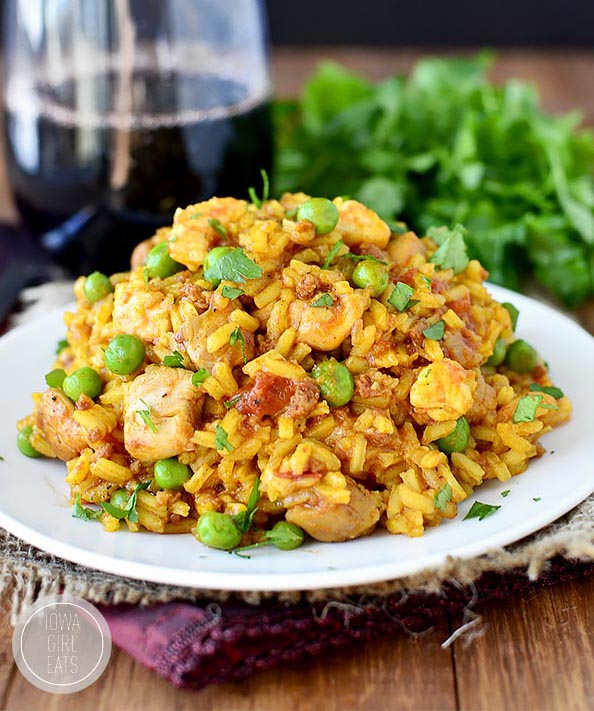 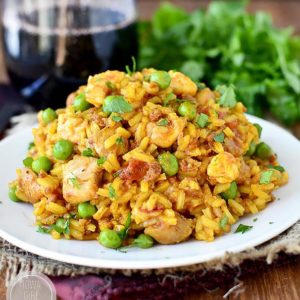 Easy Chicken, Chorizo and Shrimp Paella is a one skillet supper that's simple yet anything but ordinary.

I love eeeeverything about this dish but especially the fresh, perfectly-cooked shrimp, spiced chorizo, tender chicken, and saffron-infused rice. Elegant, easy, and hello (!!) made in just one dish. Take a trip from the ordinary for dinner tonight and give this Paella a go. Promise it’s easy, and totally tasty to boot. Enjoy! 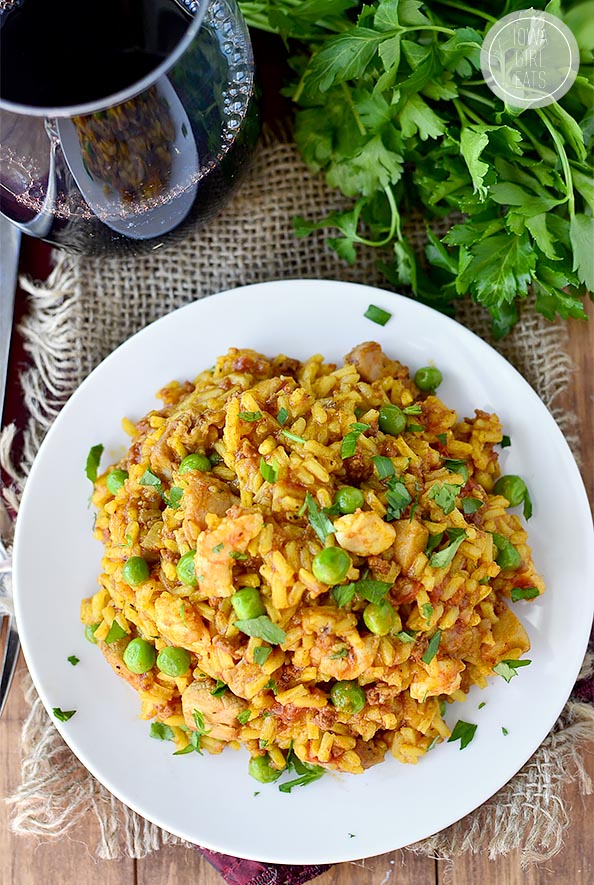