If You Live in the Midwest…

I have a confession to make. It’s 5pm and I’m still in my pajamas. 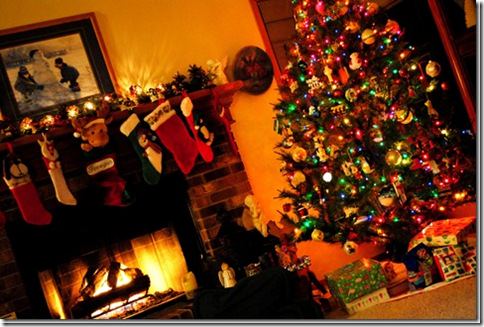 I haven’t showered or left the house all day either. I know! I have an explanation though, I swear. You see it all started with a gift. A Christmas gift.

Last Christmas my sister-in-law had an extra package sitting next to the tree for Ben and me. We eagerly tore through the wrapping paper and came up with…a radon test.

Ok so I know what radon is, from I don’t know – high school chemistry? – but how/why did it apply to Ben and me?

Iowa has the highest concentration of Radon (a colorless, tasteless, odorless gas that occurs naturally in the earth) in the United States, and exposure to radon is the second leading cause of lung cancer in the US, after smoking.

She went on to explain that the land in the Midwest, especially Iowa, is very high in uranium, which breaks down to radium, which then breaks down to form radon. As radon decays, the radioactive byproducts (vapors) rise from the ground and are inhaled – which is what causes lung cancer!

She had recently run a test in her basement, where radon levels are usually the highest, and found levels that were three times the limit deemed safe by the EPA, and she wanted us to check ours too.

The test kit sat on my kitchen counter for weeks. It takes one minute to set up, you mail it in for FREE, and results are emailed to you within days. Still, I let it sit there.

“We’re fine…” I tried to convince myself “I’m SURE of it. I don’t need to test for this silly gas!”

Really, I was just scared.

What if the levels WEREN’T safe? The basement is Ben’s man cave! He spends so much time down there! What if he’s been inhaling this deadly gas while watching sports, hanging out with his buddies and brewing beer (his favorite hobby) for the past three years we’ve lived here?!

I had to know for sure, so I finally set the dang thing up, mailed it in and hoped for the best…

I cried when the results came back. 2.5 times the safe limit. TWO POINT FIVE TIMES! MY POOR HUSBAND! We immediately shut the door to the basement and did not return (except to do laundry) until we had a solution – the installation of a mitigation system.

A mitigation system is basically a pipe with a fan on the end of it that sucks the air, and thus the radon, from the sump pump in your basement and funnels it up and out through your roof, where it continues to rise into the atmosphere. 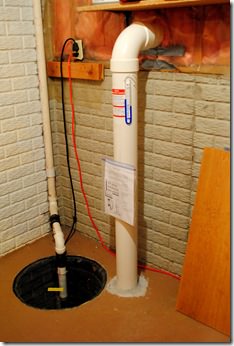 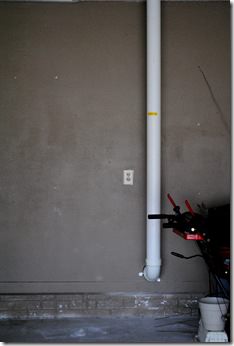 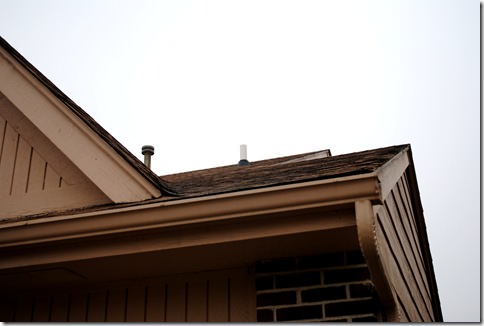 I’m still in my PJs because it took ALL day for the system to be installed, plus I didn’t feel like dressing up for the mitigation man…

Bill told me that nearly 70% of the homes in Iowa have non-safe limits of radon, but the problem is kept very hush-hush by the government and real estate industry…that makes me sad! 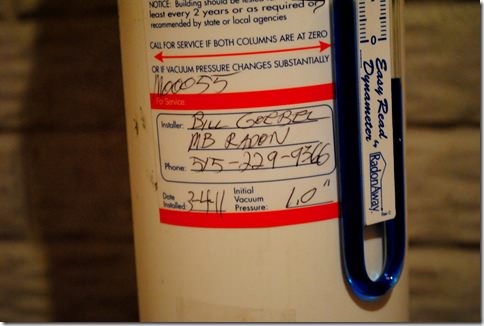 Right now in Iowa, a radon test and/or disclosure of unsafe radon levels is not mandatory in order to sell a house, which is why Ben and I had no idea about it when we bought our place. If it wasn’t for my sister-in-law – we’d still be in the basement breathing in poisonous gas every night. I am so thankful for her gift!

If you are building a home, make sure it is piped for a mitigation system, or if you are buying one – make sure that it is tested and have the installation of a system be part of your negotiations if needed. Each house is a special case too – my home has unGodly high levels of radon, but my neighbor’s might not. Radon’s weird that way.

After much research, we learned that young children and the elderly are more susceptible to getting ill from radon, while healthy men Ben’s age are less so and he’ll most likely be just fine. I am SO glad to know that he will be breathing in clean air from now on, and he is SO glad to have his man cave back!!! He’s literally “WAHOOOOOOO”‘ing!

If you live in Iowa, the Midwest – or really anywhere in the US – and own a home, I encourage you to get a radon test kit. Even if you don’t spend a lot of time in your basement where radon mostly hangs out, at least you’ll know. Like I said, it takes one minute to put the kit together, you send it in to be tested in a pre-paid envelope and the results are emailed to you in a matter of days. Wouldn’t you feel better if you just knew, either way?

ARE YOU OVER THE CHEMISTRY LESSON!?

While Bill worked away, I got a little carried away with a fresh pineapple. It’s true… First up, Cottage Cheese + Fresh Pineapple for lunch. 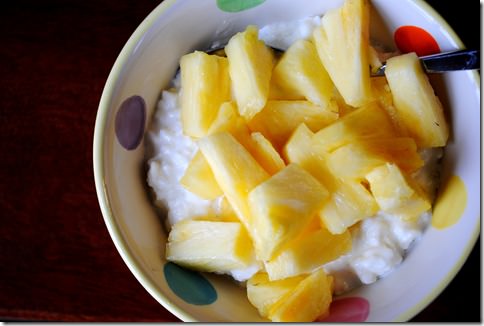 This is my #1, all-time favorite way to eat cottage cheese – it’s what I grew up eating! 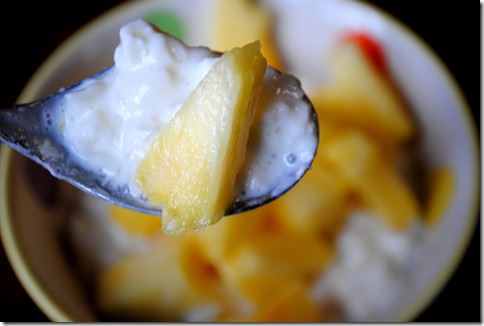 Cold, creamy cottage cheese and fresh, juicy pineapple. Match made in Heaven.Well, it’s Friday and I feel like SUCH a lump for sitting here all day. Tomorrow will be an early start to get in a good workout, run some errands, then get ready for a super-fun, local event my parents, Ben and I are attending in the afternoon. It involves beer AND bread.

I gave my jeans the afternoon off.