Kale Fried Rice is a gluten-free take on fried rice you’ve never tasted, but will instantly adore! Easy, healthy, and so yummy. 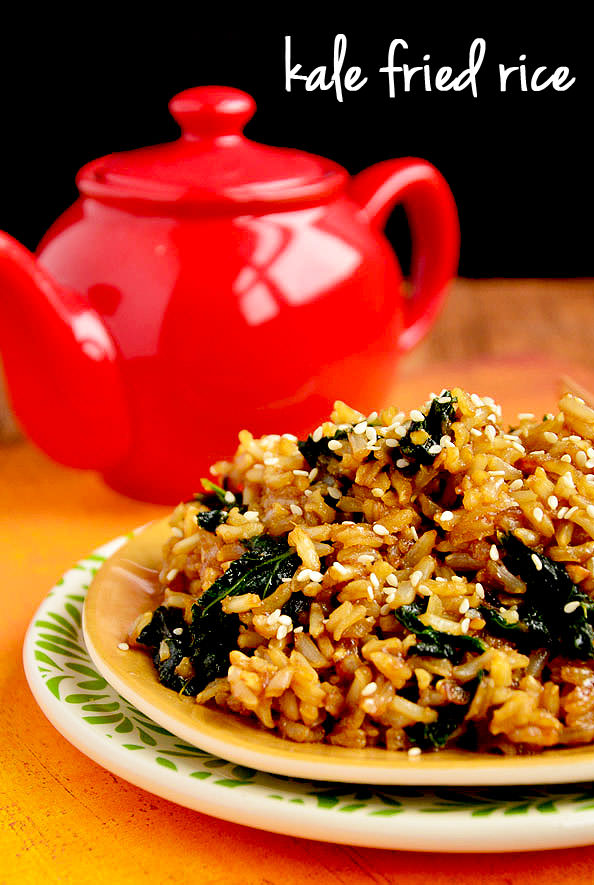 The recipe is from my sister-in-law, Kerry, whose 3 year old son, Finn, is obsessed with kale. Like, throws out a request for it when she asks everybody what they want from the grocery store each week. 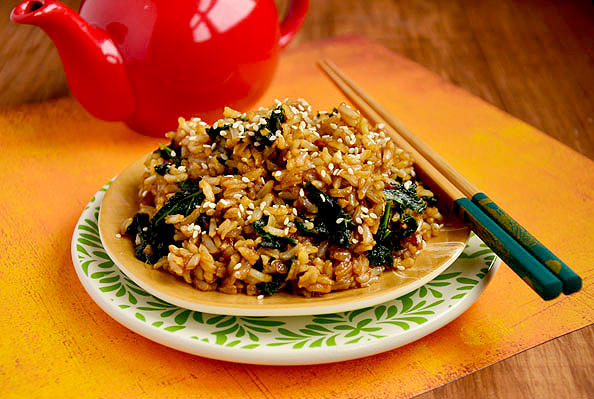 (PS could you just nearly throw your computer out the window over how adorable they are?!)

Anyway, kale chips, one of his favorite preparations of kale, can get old so she’s always on the lookout for new recipes that incorporate the vitamin-packed green, and stumbled upon this recipe for Kale Fried Rice a couple months ago. It was such a hit with her, my brother, AND Finn, that she now makes it regularly for a quick and easy weeknight dinner. Except now she doubles the recipe. And now I know why.

I literally inhaled this plate of kale fried rice – it is the BEST! It almost has a sesame chicken flavor, from a secret ingredient I’ll divulge below. The kale is nice and chewy-crisp and, gosh, it’s just so much win on one plate. Which is exactly what I texted her after making this.

Kale Fried Rice = SO MUCH WIN! 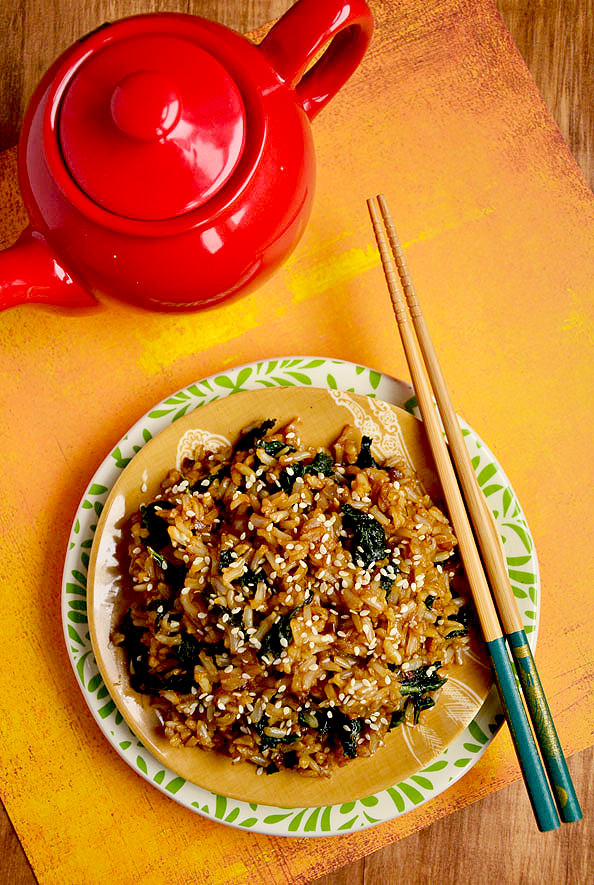 As I was making the fried rice I thought it’d be nice to pump it up with egg, edamame, or broccoli, but seriously, it is perfect as is. Try it once as written then add whatever it is your heart desires to the next batch. Which there WILL be! 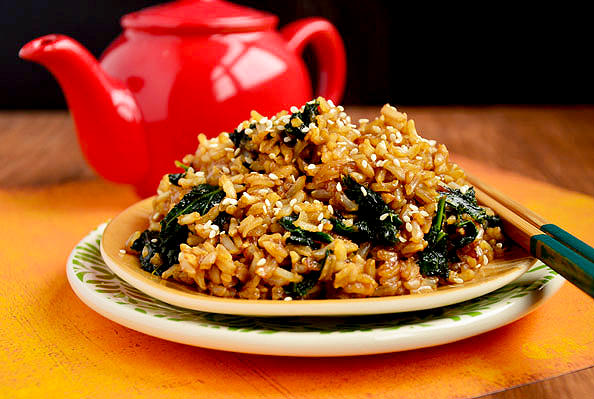 How to Make Kale Fried Rice:

Start the Kale Fried Rice by making the delicious, sesame-chicken-esque sauce. You’ll need 2 Tablespoons each mirin (available in the Asian foods aisle at the grocery store) and gluten-free tamari or soy sauce (dish will not be GF if using soy sauce) as well as 2 teaspoons sesame oil and 1 teaspoon maple syrup. 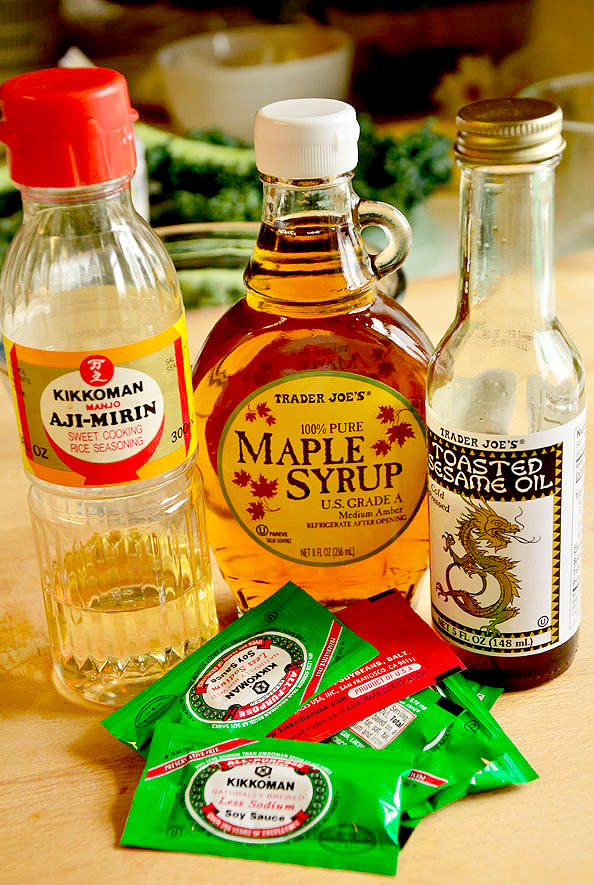 I was real, I mean REAL skeptical about adding maple syrup to the sauce, but it is ace. You can’t pick out the flavor, but it adds an awesome, slightly-sweet contrast to the salty soy sauce. MMM! Ok, mix all the ingredients in a small bowl, then set it aside. 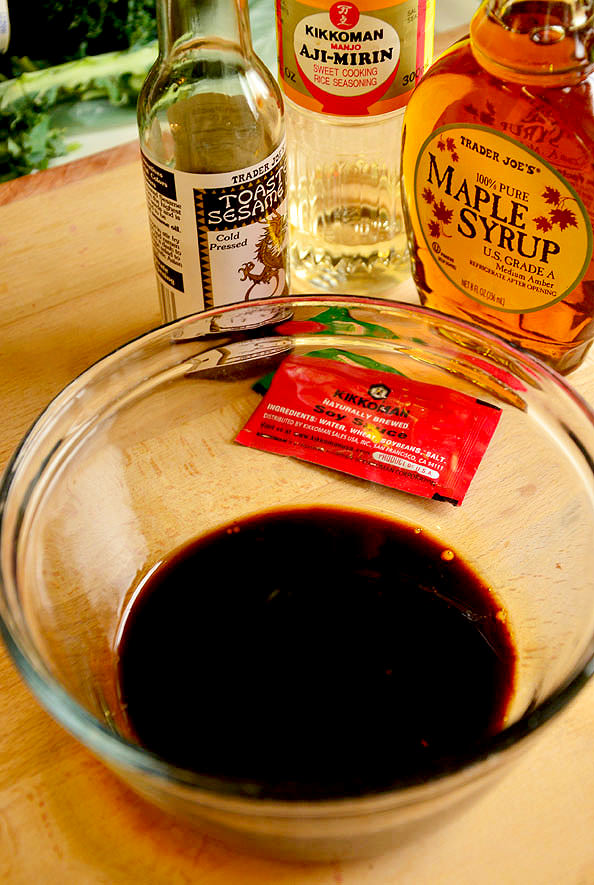 Next, get 3/4 cup long grain brown rice (I used jasmine) cooking in 1-1/2 cups chicken broth on the stove. Unpictured because I forgot, and well, you know what cooking rice looks like!

While that’s cooking away, strip 1/2 bunch kale from the stems then tear into bite-sized pieces and wash in a colander or salad spinner. You’ll need 4 cups packed kale total.

Next bring 4 cups water plus 1/2 teaspoon salt to a boil in a big wok or skillet. Add the kale then boil for 4-5 minutes or until it’s tender. Drain the kale then, when it’s cool enough to handle, squeeze the excess moisture out with your hands and set it aside. 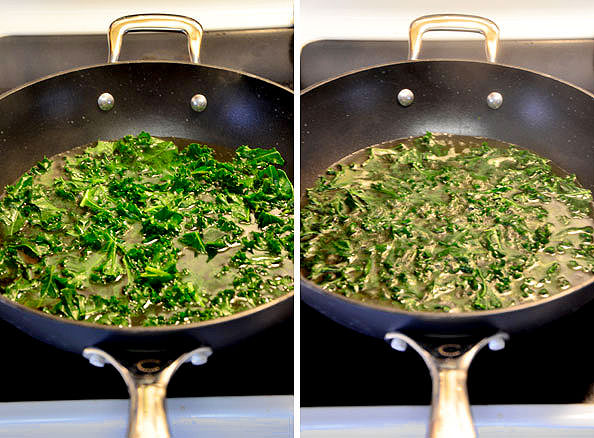 Return the same wok to the stove then turn the heat down to medium-low. Add 1 Tablespoon vegetable oil and 1/2 small minced onion then saute until golden brown and tender, about 3-4 minutes. Then add 4 cloves – yes, 4 CLOVES – minced garlic and saute for 1 more minute. I LOVED how garlicky this fried rice was! 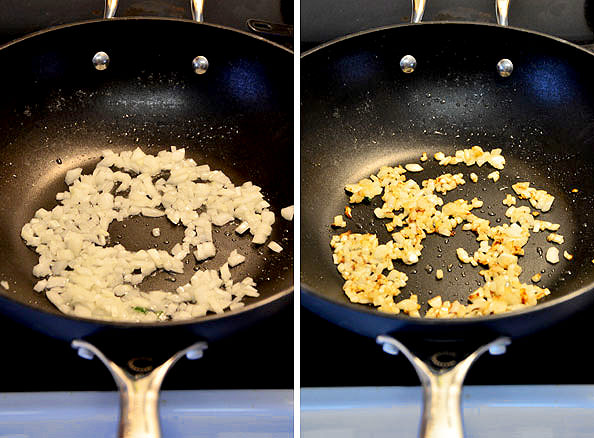 Add the cooked/drained kale back to the wok then saute for 2 minutes. 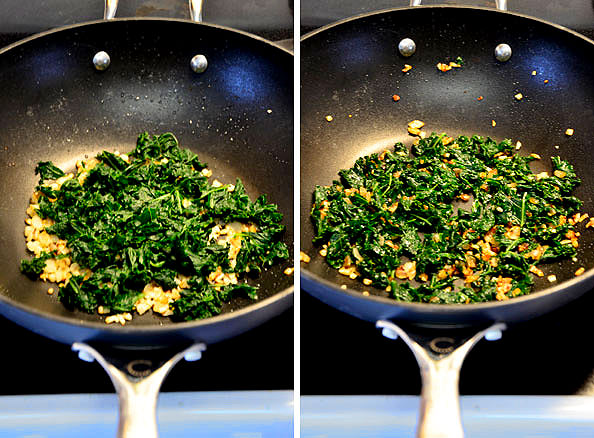 Add the cooked rice into the skillet then toss to combine. 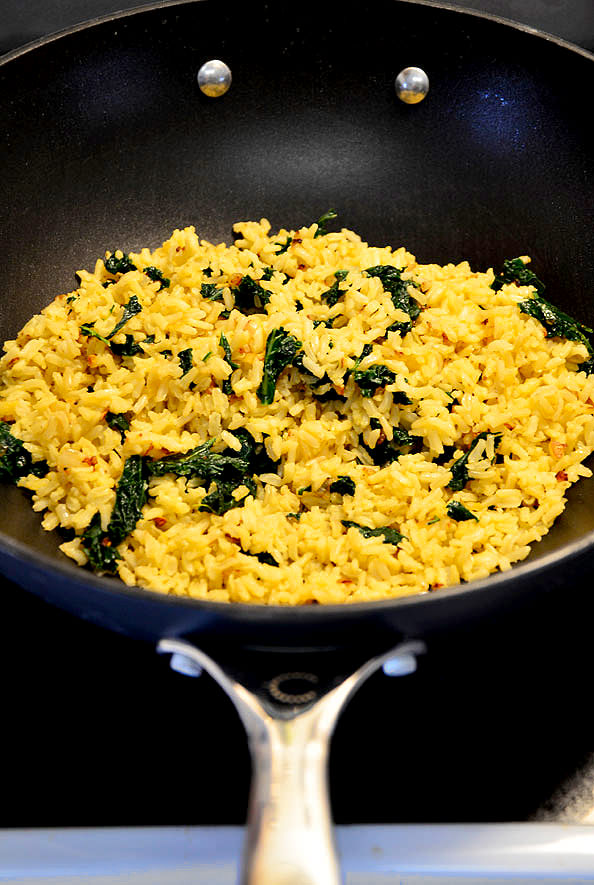 Then add the pre-made sauce and toss again. 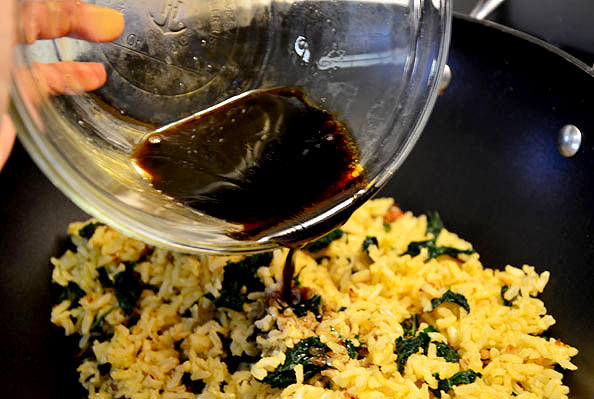 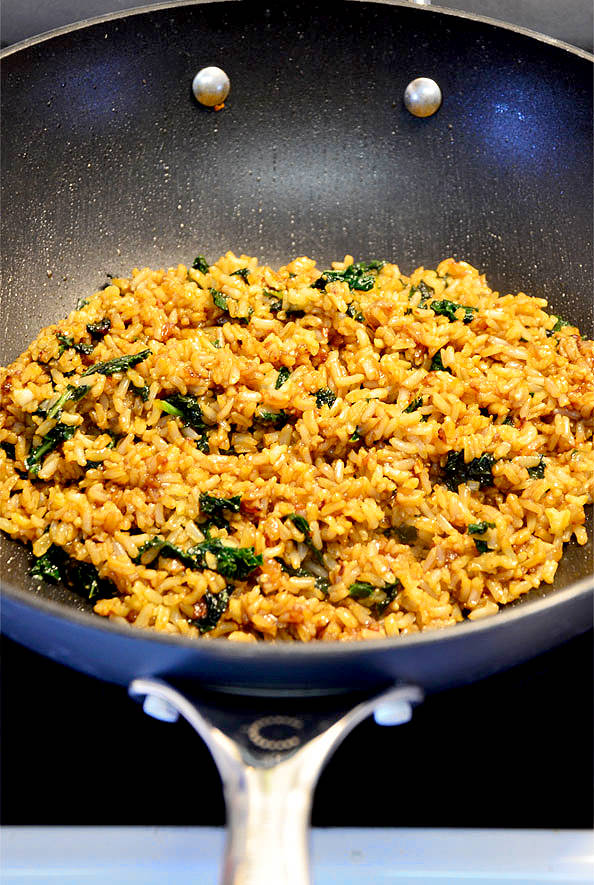 Scoop onto plates, then sprinkle with sesame seeds, which add a nice PoP on top! 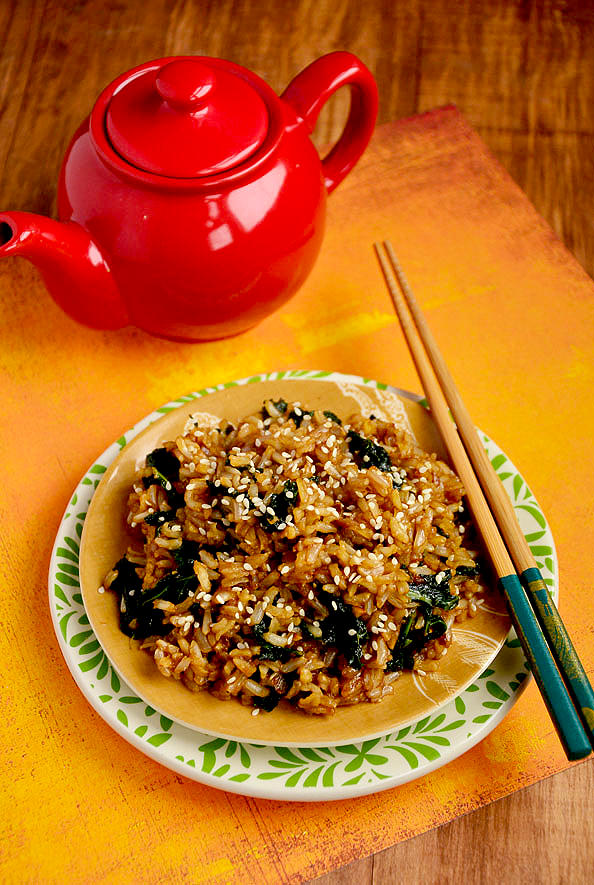 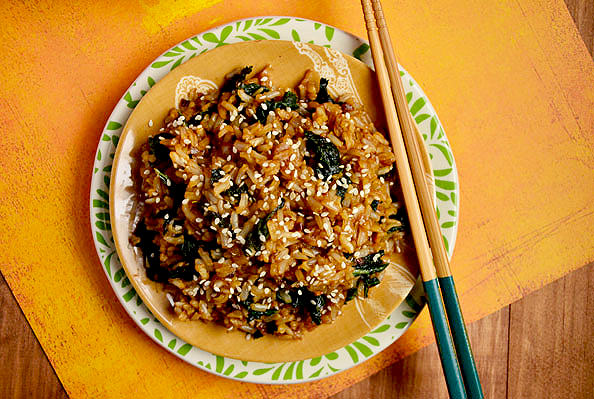 Salty, garlicky, and just a touch sweet, the textures and flavors in the dish were top notch. Plus, if a 3 year old loves it, how bad could it be?! ;) 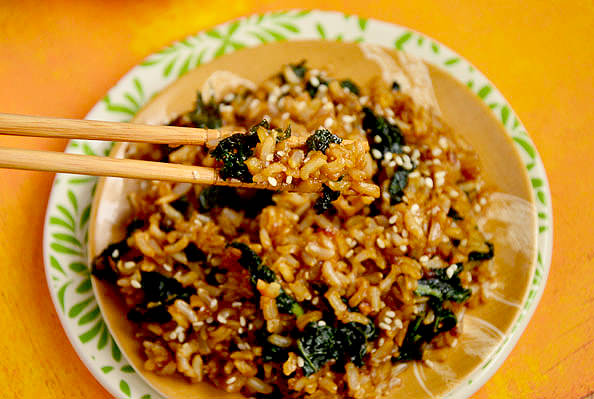