Shrimp and Grits Bites are a bite-sized version of shrimp and grits. This flavor packed, southern-inspired appetizer is perfect for parties! 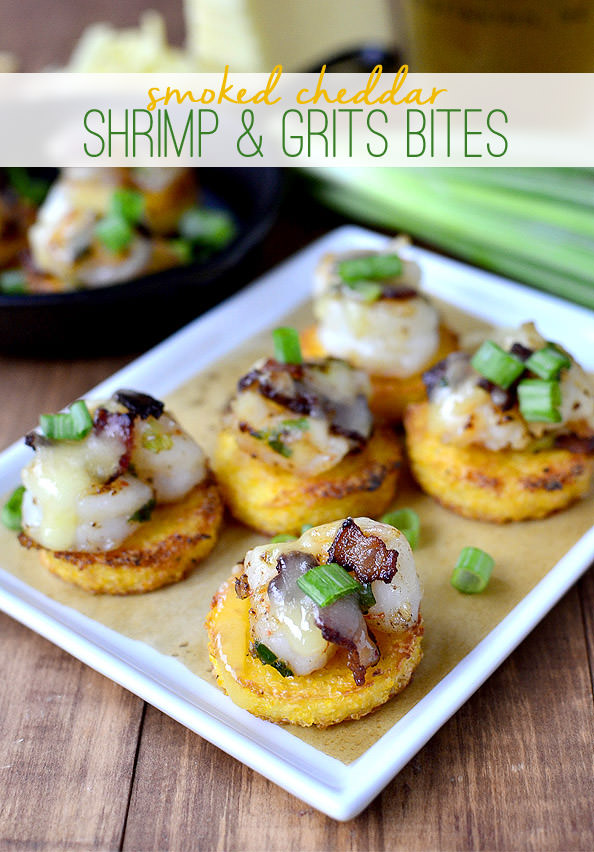 I’ve officially found my new favorite food of all time and it’s smoked cheddar grits, which I used in these epic Shrimp and Grits Bites! I know I say this a lot but I seriously. Cannot. EVEN!

Like a toddler to a pile of Cheerios I felt inexplicably drawn to the shrimp and grits at nearly every restaurant we visited in Savannah last week. I guess it’s not really inexplicable – shrimp and grits are amazing! Despite the fact that Iowa leads the nation in corn production (and eggs, believe it or not,) grits, or ground corn, are not even a little bit mainstream around here.

Why oh WHY has the Midwest been holding out on me? 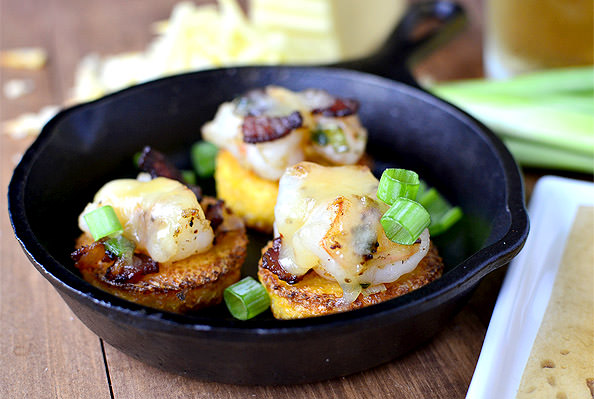 The shrimp and grits appetizer Ben and I ordered at the Olde Pink House were advertised as fried grits cakes topped with shrimp and cheddar cheese sauce, but their gluten-free version came as creamy grits served with the sauce and shrimp (the cakes were breaded then fried thus making them not gluten-free.)

Well, the concept of fried grits cake intrigued me so I decided to shrink them down to bite-sized and use smoked cheddar cheese inside the grits instead of as a sauce on top. Thus, Smoked Cheddar Shrimp and Grits Bites were born! 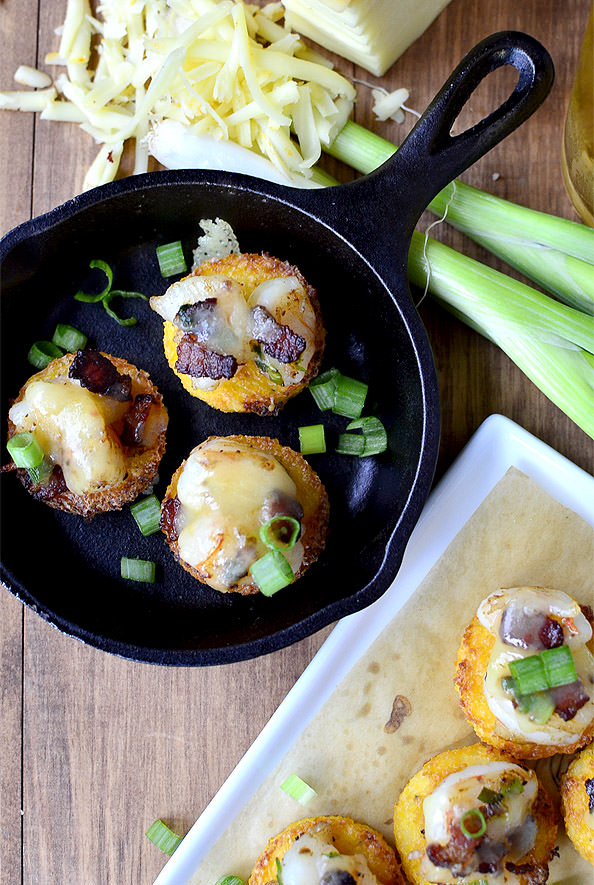 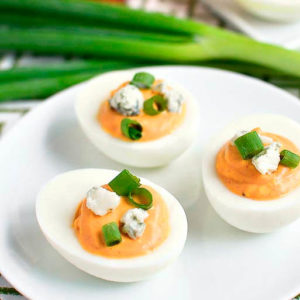 Quick-cooking grits (we’re talking five minutes here, people,) are cooked in chicken broth then flavored with smoked cheddar cheese to make one of the best tasting foods I’ve ever had. So simple. So insanely delicious. The creamy grits are refrigerated until solid then cut into rounds or squares, and then baked until crunchy on the outside and creamy on the inside. After being topped with sauteed shrimp and bacon the bites are sprinkled with a touch more smoked cheddar cheese than broiled for a minute or two.

Can you say perfect tailgating food? Bite-sized, flavor-packed, and southern-inspired which let me relive our trip.

By the way, as crazy as tailgating fans get here in Iowa, I have heard some pretty epic stories about tailgating in the south. Pearls and bow ties? Southerners, can you confirm or deny? Ben’s got a friend in Alabama who’s been asking us to come down for a couple years to attend a University of Alabama tailgating bash/game to see what it’s all about. Actually, I don’t know if the invitation extends to me but, news flash, I’m coming. 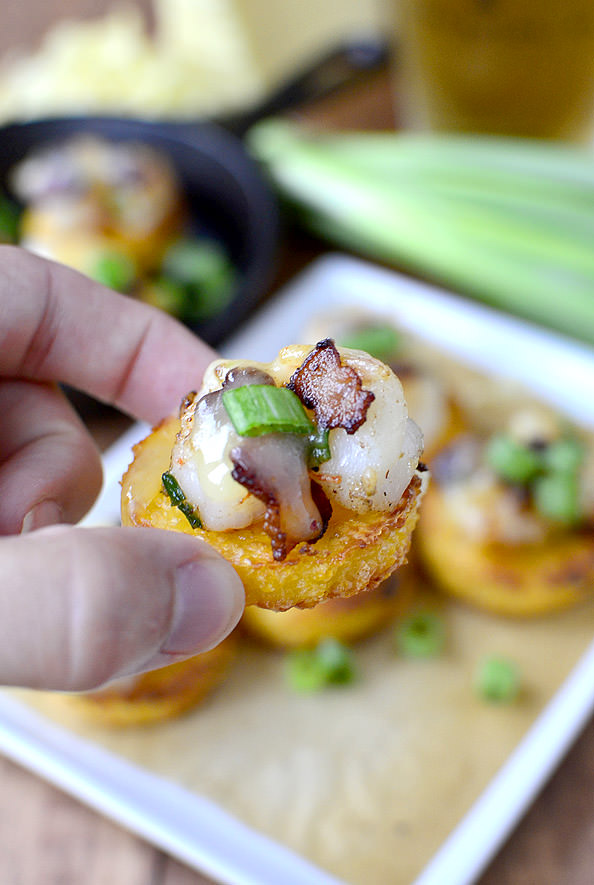 Start by making the Smoked Cheddar Grits. You’ll need grits, of course! Because I don’t have any experience making grits, I did a little research before diving in. I knew they’re similar to polenta which is largely used in Italian cuisine, while grits are more common in southern cooking, but I wanted to know from Professor Google, what’s the main difference between polenta and grits? We could debate for hours but, despite some subtle differences, my research tells me they’re just both ground corn.

That said, look for grits at the grocery store that may also say “polenta” or if you’re lucky enough to live somewhere where you can get fresh-ground grits, go for it! Just make sure they’re quick cooking. While the front of this package didn’t specify “quick-cooking”, I looked at the instructions on the side of the bag which said to cook them for 5 minutes. 5 = quick! 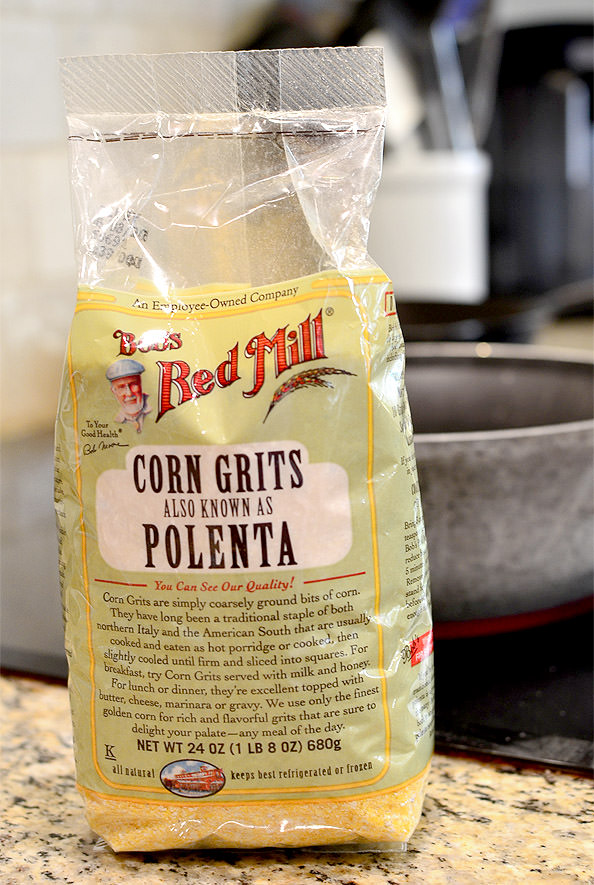 Whisk 1-1/3 cup quick-cooking grits into 5-1/4 cups boiling chicken broth then turn the heat down to medium and cook for 5 minutes, whisking occasionally. That’s it. Who knew grits were so easy to make? The grits will get thick and bubble/spatter a bit, so a splatter screen is helpful if you have it (I didn’t and just had a few spots I needed to clean up off the floor.) 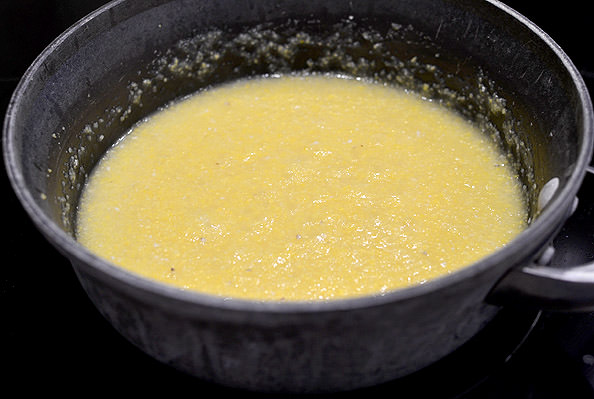 After 5 minutes, remove the grits from the heat then whisk in 1-1/2 cups smoked cheddar cheese, 2 Tablespoons butter, salt, and pepper until smooth. 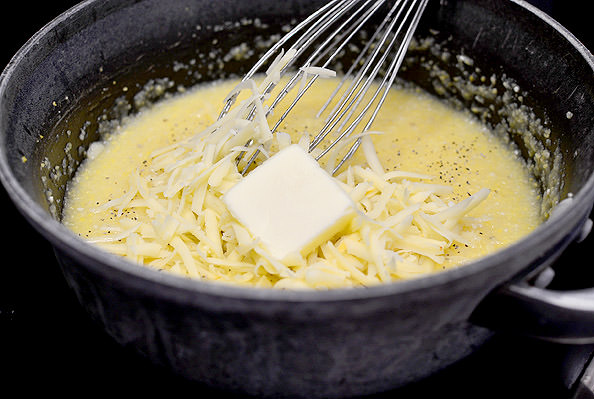 Smoked cheddar grits = life changing. This pan rocked my world! I was this close to eating the entire thing and scrapping the bites all together. This close. 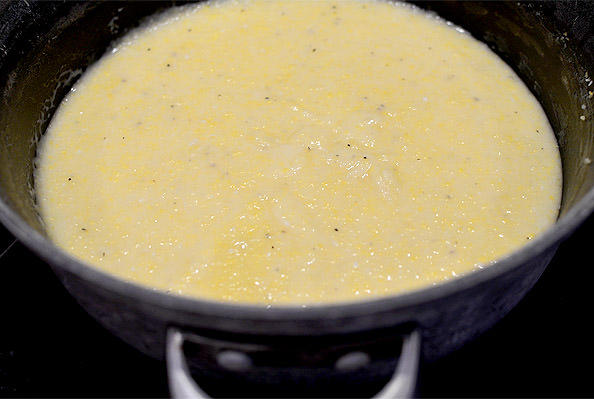 Oh, here’s the smoked cheddar I used. I got it at the regular grocery store in the specialty cheese section. It makes SUCH a difference flavor-wise. If you can’t find smoked cheddar for some reason, a nice sharp cheddar or even white cheddar would still be good too. 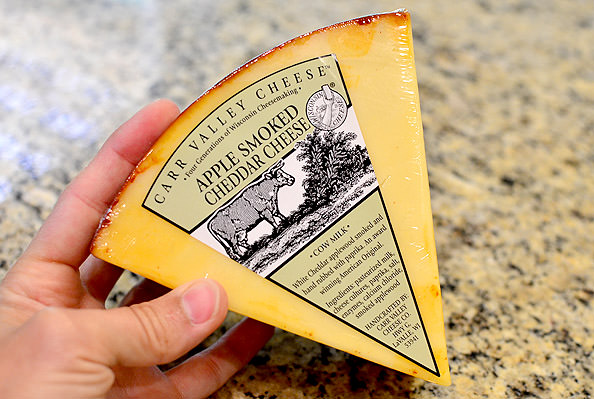 Now, I’d completely understand if you wanted to eat the entire pan of cheddar grits as-is at this point (see internal struggle above) but I promise you these bites are worth moving forward with. So, pour the grits into a nonstick sprayed 9×13″ pan then cover with saran wrap and pop in the fridge for at least 2 hours, or up to overnight. I’ve done them both ways and it doesn’t make a difference either way. 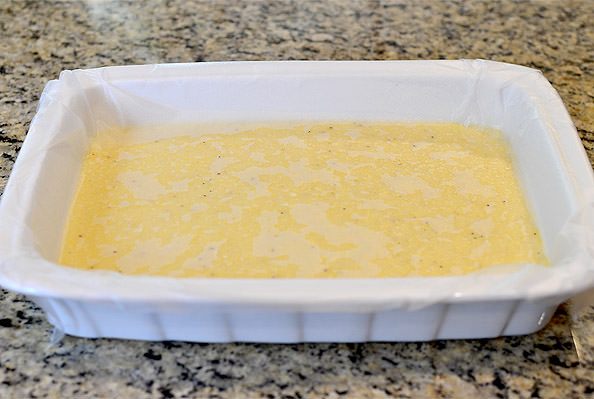 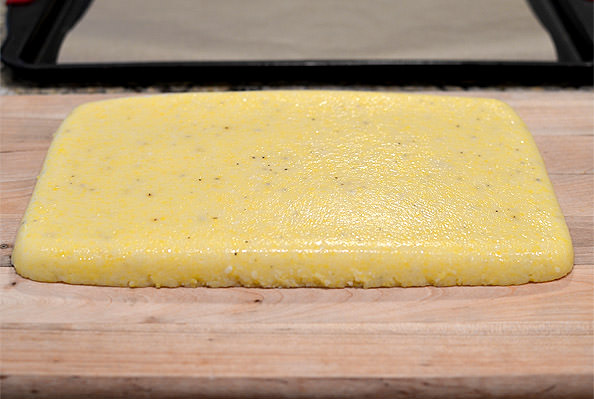 Using a 2″ round cookie or biscuit cutter, cut out 24 rounds then place onto two nonstick sprayed, parchment paper-lined baking sheets. If you don’t have a round cookie cutter, cut the grits into 2″ squares with a sharp knife. The rounds are cute but you’ll have less waste with the squares. Either way, pop the baking sheets into a 400 degree oven then bake for 40-45 minutes or until golden brown, flipping halfway through.

Make way ahead tip: Cut the grits out then freeze on a baking sheet and transfer to a freezer bag. When you’re ready to make these apps just place ’em on the prepared baking sheet and bake per usual. No thawing necessary!

Topping time! When the grits have 15 minutes left to bake, crisp 4 slices chopped bacon in a very large skillet over medium heat. Transfer to a paper towel-lined plate to drain then remove all but 2 Tablespoons bacon grease from the skillet (add extra virgin olive oil if you don’t have enough fat.) 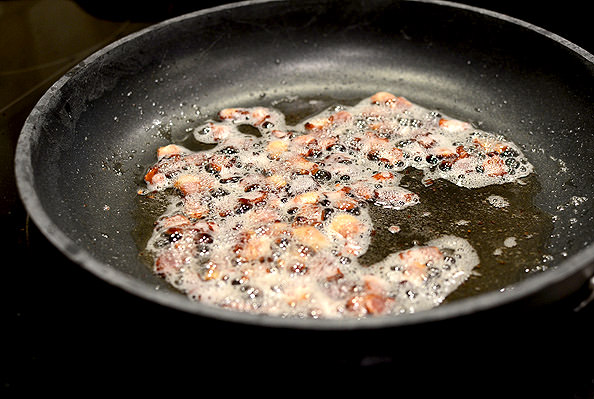 Turn the heat up to medium-high then add 1lb peeled, deveined, and chopped raw shrimp, 3 chopped green onions and 2 minced garlic cloves. Season lightly with salt and pepper then saute until the shrimp are pink and cooked through, 3-4 minutes.

I used frozen, raw, deveined shrimp – you don’t want pre-cooked shrimp. Just thaw the shrimp in a bowl of water, peel if they come with the shell on, then pat dry and chop. 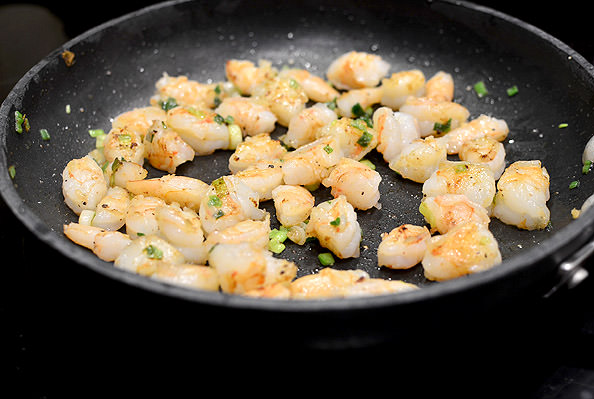 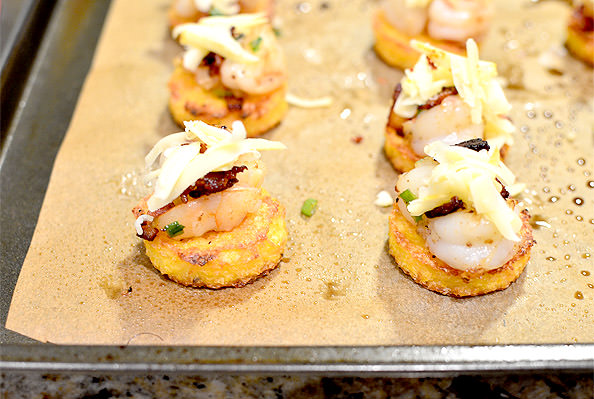 Broil for a minute or two then serve! 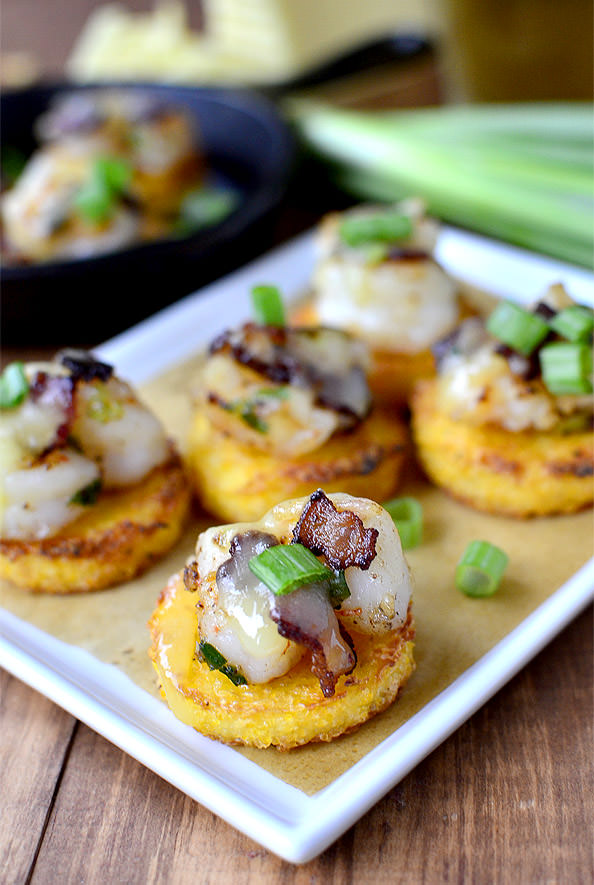 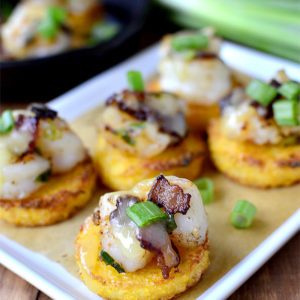 Shrimp and Grits Bites are a bite-sized version of shrimp and grits. This flavor packed, southern-inspired appetizer is perfect for parties!

These crunchy grits cakes are wonderful creamy on the inside with a mouthwatering smokey flavor. Topped with fresh shrimp and bacon – I am telling you, there’s nothing better! 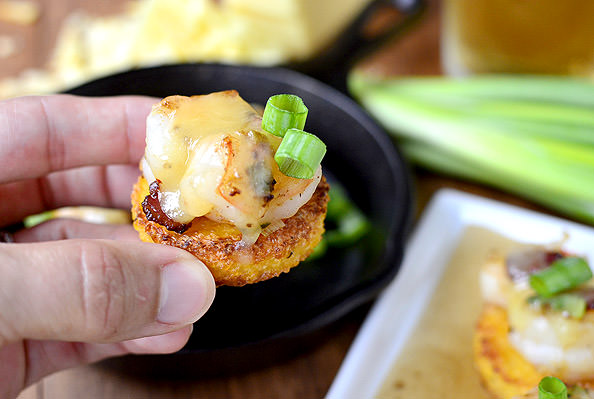