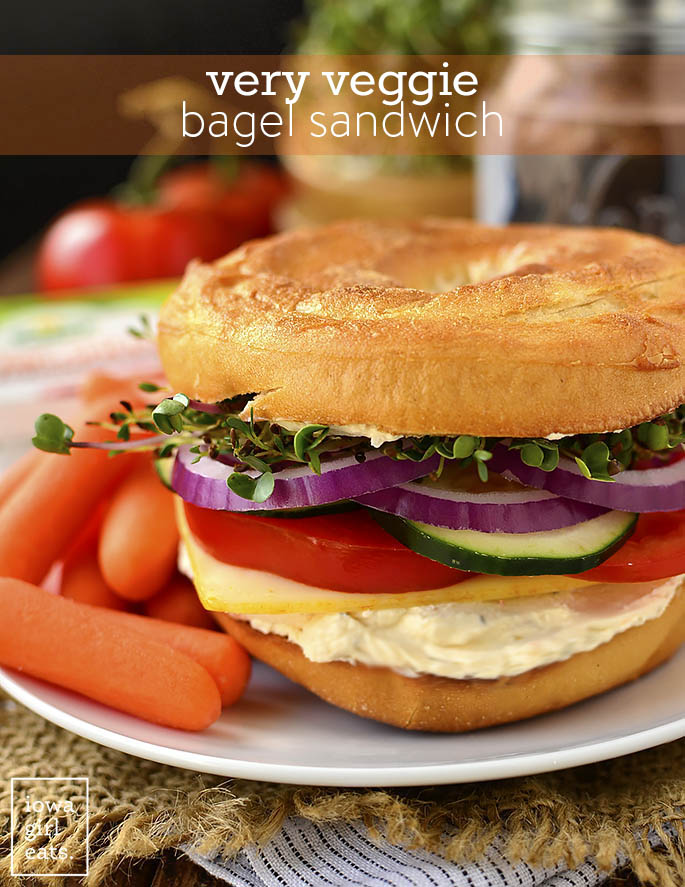 As a family of five, we didn’t go out to eat very often growing up. The bill racked up quickly, in large part due to my older brother who had a habit of ordering the most expensive thing on the menu. Steak and lobster for a 10 year old? Wasn’t above it.

Sometimes if we were really lucky though, we’d head to HyVee for brunch after church on Sunday mornings. Ask any Iowan who lived within a five mile radius of the grocery store back in the 90s and I can almost guarantee you they’d say the best deal in town was their $3 plate piled with 2 eggs, 2 slices of bacon, a pile of greasy hash browns, and 2 slices of thick-cut toast dripping with butter. You couldn’t beat it!

Years passed and eventually I traded post-service bacon and egg brunches with Mom and Dad for a hangout session with ma church friends at a nearby bagel shop. We were young, had just gotten our licenses, and the bagel shop was so cool, man. Riiiight.

Regardless of how awesome we thought we were loitering at a bagel shop on Sunday morning, the shop’s bagel sandwiches actually slayed. My favorite sandwich to this day was their Very Veggie Bagel Sandwich. Garden-fresh toppings including tomato, cucumber, red onion, and sprouts piled onto a freshly toasted bagel with garden-vegetable cream cheese. Might sound basic, but it was clearly memorable, and is made even better using THE BEST EVER cream cheese from Arla USA! 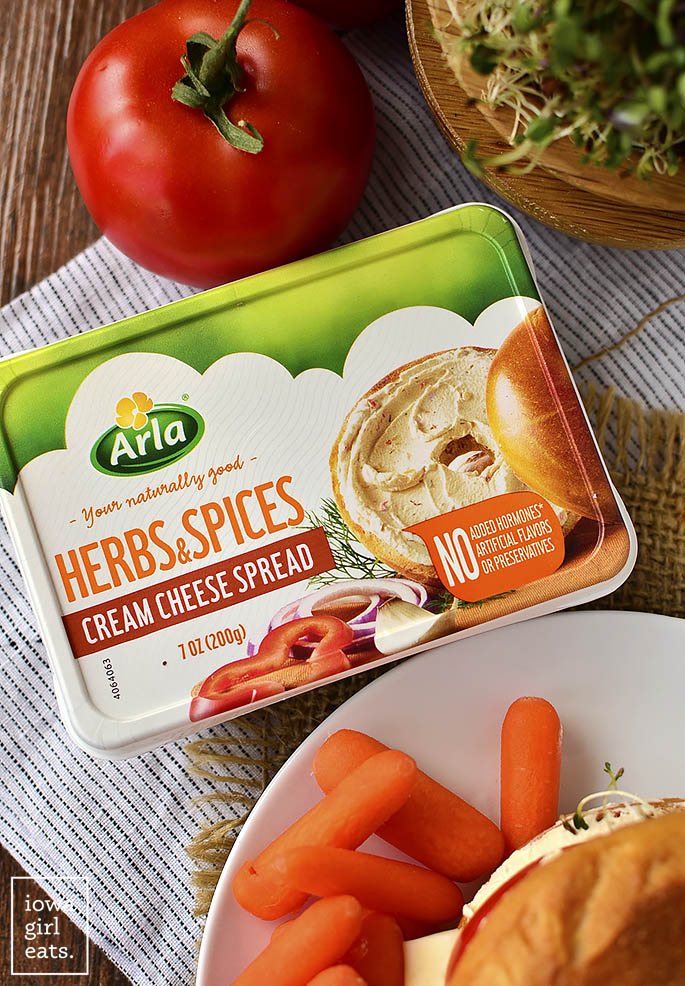 File ‘cream cheese’ under foods I had zero opinion of before trying Arla’s. It’s good, but it’s just cream cheese, right? WRONG. You have no idea how good cream cheese can be until you’ve tried Arla’s version, which is soft and spreadable right out of the package, and unbelievably decadent tasting. That’s because it’s made with simple ingredients you can recognize like cream, milk, cheese culture, and salt. No artificial flavors, preservatives, thickeners, nor stabalizers – just 100% goodness.

I’m excited to be partnering with Arla this year to share their wonderful products with you, and this post is sponsored by Arla. Arla not only makes cream cheese, but sliced cheese, and snack cheeses (which I love to pair with Duke’s beef sticks + an apple for an easy snack!) – all of which are made with short, clean ingredient lists. They have a really cute campaign out right now asking kids to define ingredients that are commonly, and unnecessarily, added to cream cheese. Imagine asking a 5 year old to describe what they think “sorbic acid” is, and you get the idea.

But back to the taste! Arla’s cream cheese in particular is just one of my favorite foods. So pure and delicious – I not only use it to top bagels, but dip into with vegetables. It’s so creamy! My favorite flavor is the Herbs & Spices cream cheese which, local folks – tastes just like AE Party Dip. Except you get to put it on a hot and toasty bagel. YES.

This bagel sandwich is a cinch to assemble. Enjoy for breakfast, or wrap it up for a healthy lunch on the go. I know you’re going to love it! 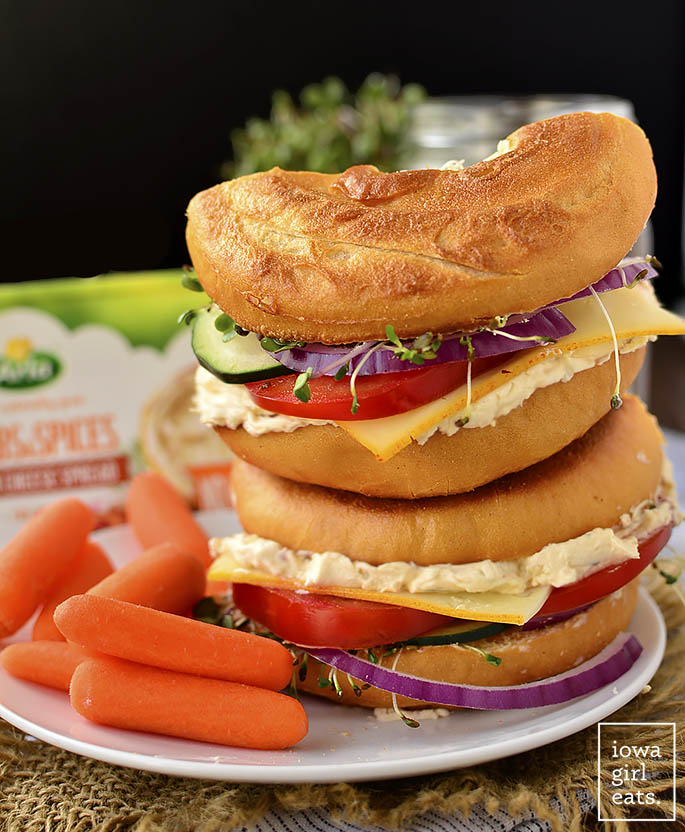 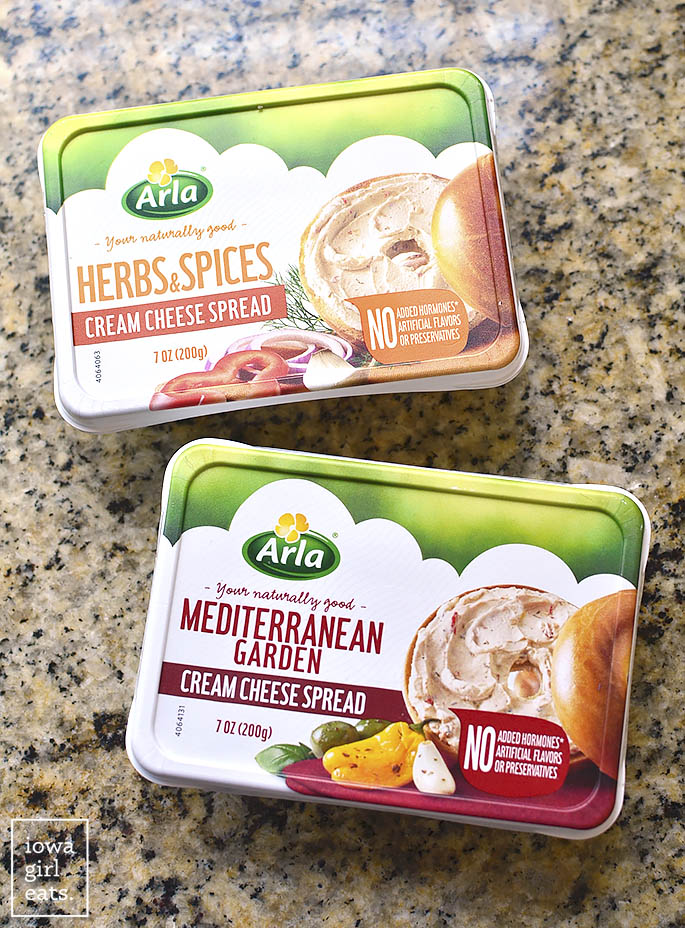 To build the sandwich all you have to do is toast a gluten-free bagel (I like Canyon Bakehouse’s plain bagels,) then let it cool while you slice the fresh vegetable toppings. Once the bagel has cooled, slather the cream cheese onto the bottom half – the thicker, the better. 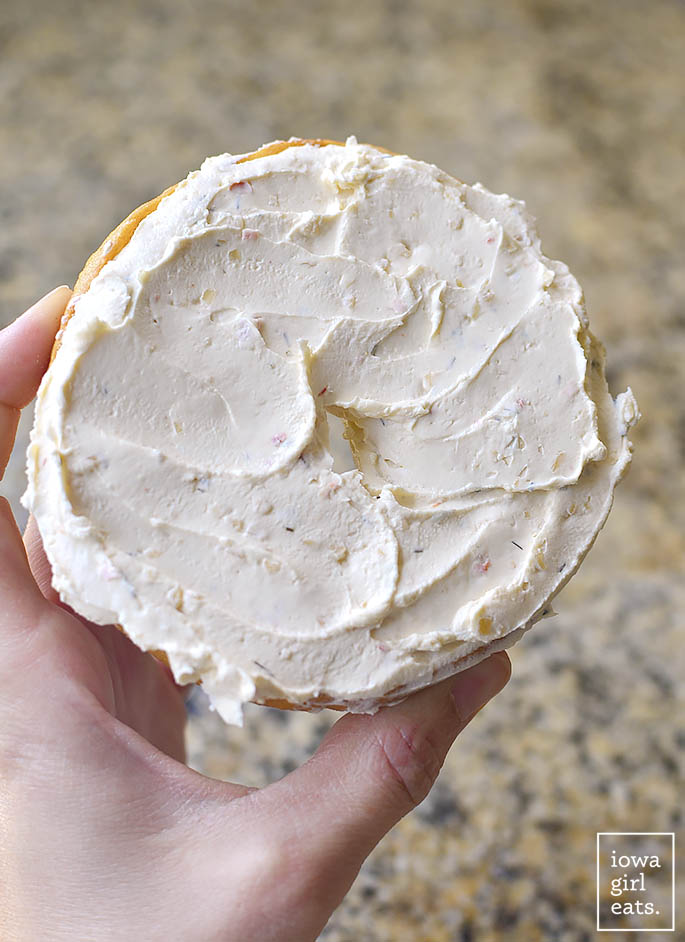 Next layer on 1 slice Arla Muenster cheese. I grew up eating muenster on sandwiches, as it’s one of my Mom’s favorite cheeses, and it’s perfection on this veggie bagel sandwich. Super soft, creamy, and mild tasting. 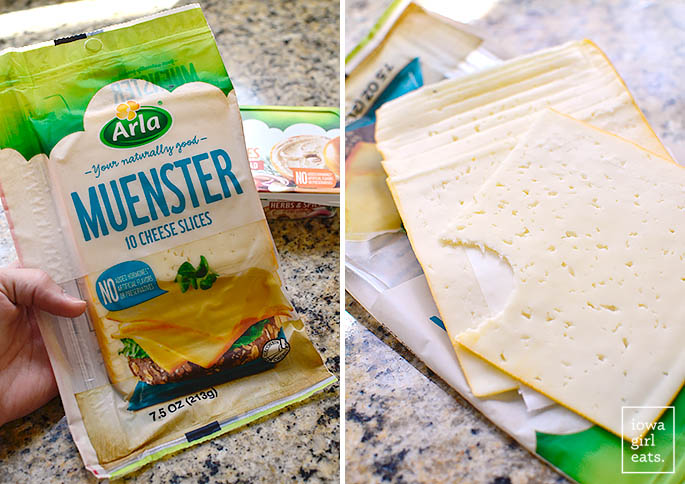 Finally, pile high with thinly sliced tomato, cucumber, and red onion, plus a big pinch of fresh sprouts, which really make this sandwich – they add a ton of taste and texture. Top with the other bagel half then slice and dig in. I hope you love this healthy, filling, downright delicious breakfast or lunch idea – and please do give Arla products a try if you can find them at your grocery store! 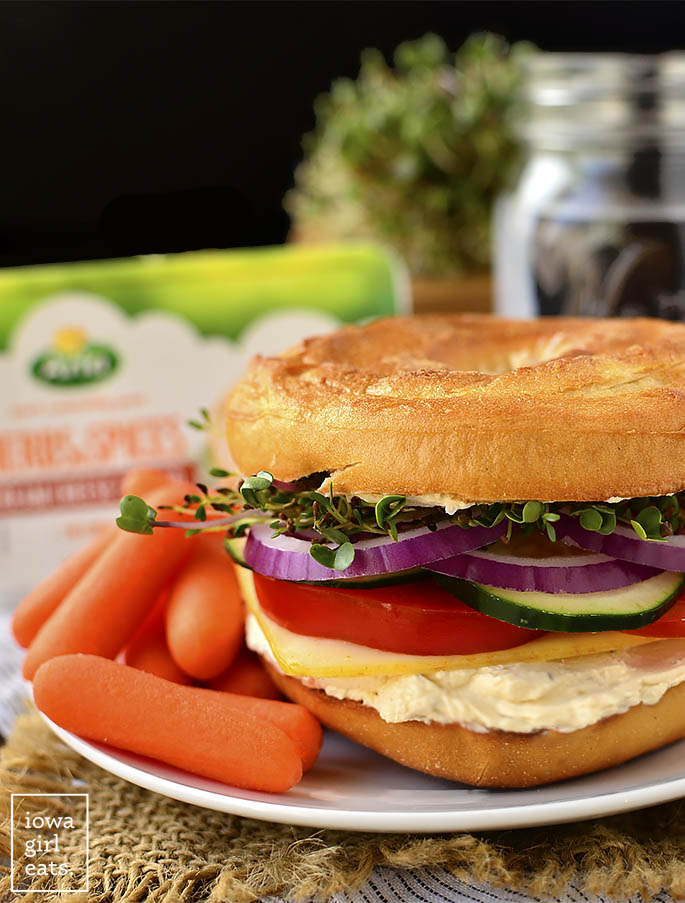