Where We Stayed in Jamaica + Things to Know Before You Go

Ben and I booked our trip through Expedia.com, and stayed at the RIU ClubHotel in Negril on Bloody Bay, about 10 minutes north of 7 Mile Beach, and an hour’s drive from the Montego Bay Airport (MBJ). 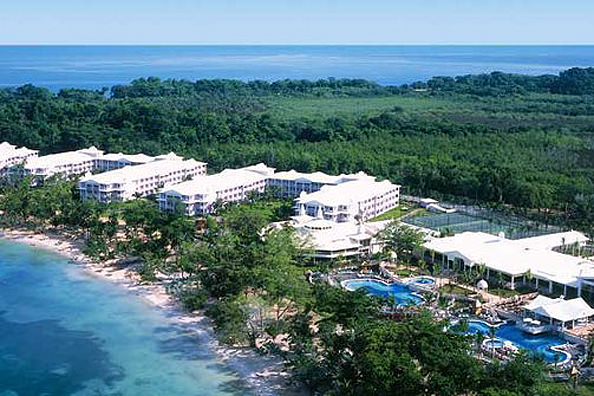 We stayed at the RIU Palace in Cabo San Lucas for our honeymoon four years ago, and love the all-inclusive option the resorts offer, which include all meals, drinks, and dining at usually 4-5 onsite restaurants, as well as a morning and evening buffet. You will not go hungry at a RIU! 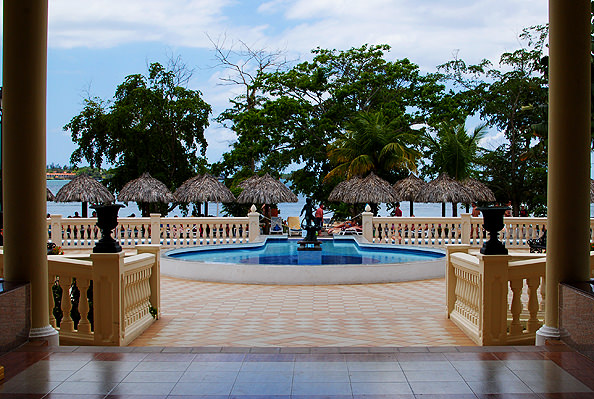 Since we stayed at a “ClubHotel” instead of a “Palace”, I’d have to say the Palace in Cabo was nicer, but from what we saw of other hotels in the area, this was near the top for Negril. There was actually a RIU Palace located about 1/4 mile up the bay from us, but from what we could see, the only difference between the two was that our hotel was probably more family friendly, and $400 cheaper. 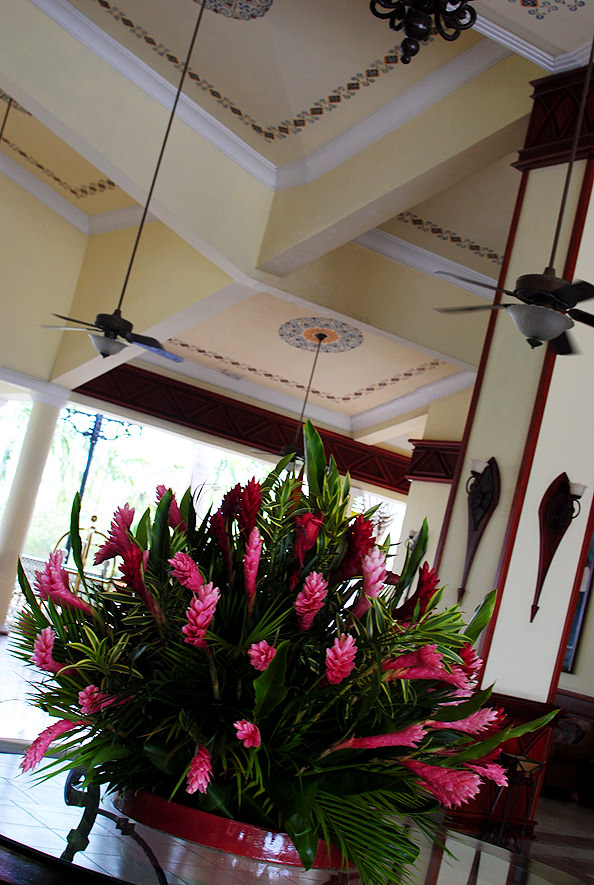 Besides, they all have the patented RIU liquor carousel in each and every room! 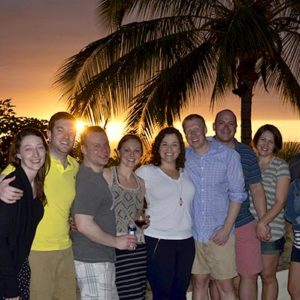 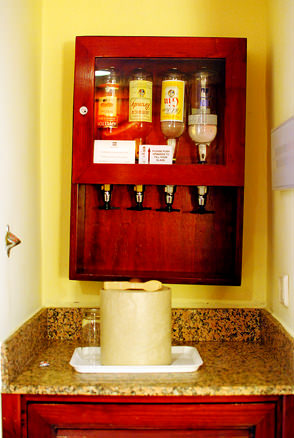 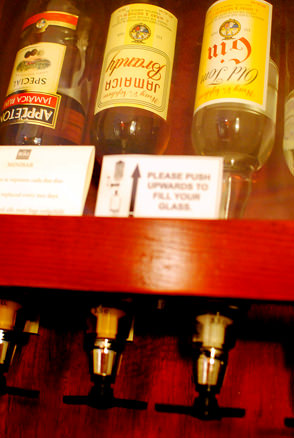 Plus a mini bar stocked with all the water, soda, and Red Stripe you can drink. What more do ya need?! ;) 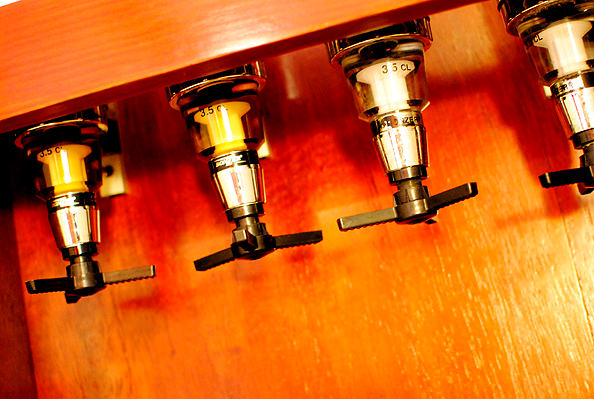 The hotel was beautifully landscaped with palm trees and other trees native to the area. 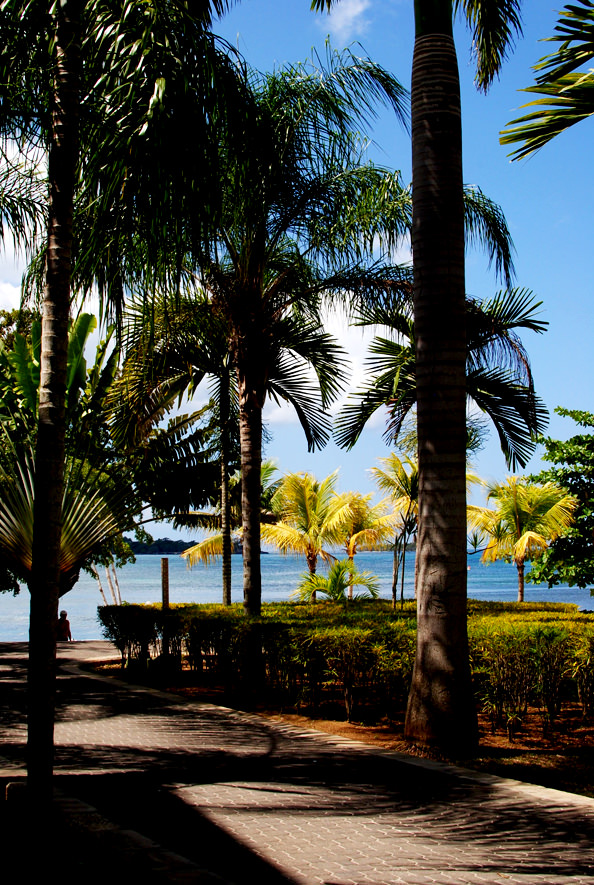 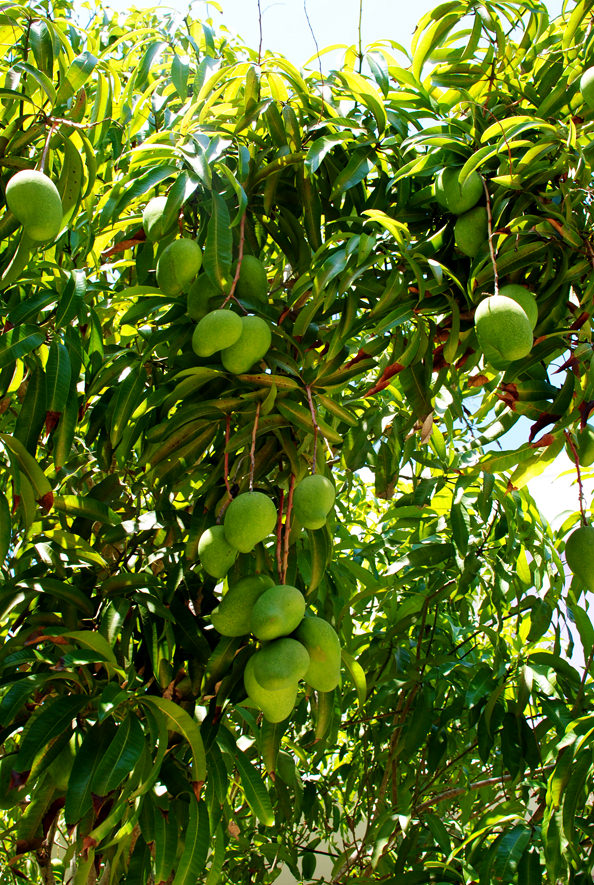 and these wacky 2D palm trees, which I kind of hated. They made me squirm for some reason! 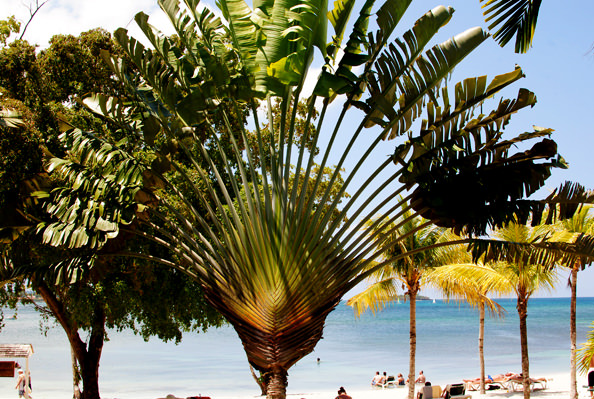 The beach was clean, large, long, and there were plenty of sand loungers for everyone. 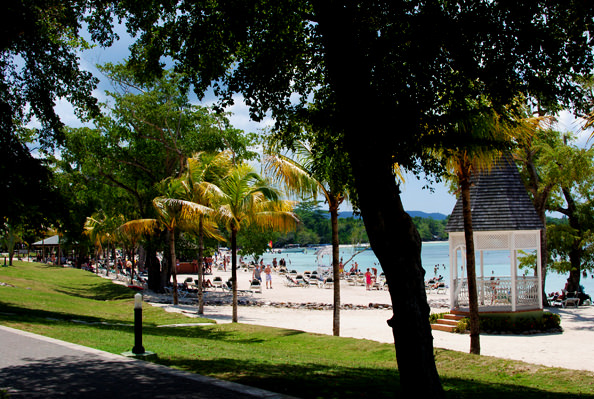 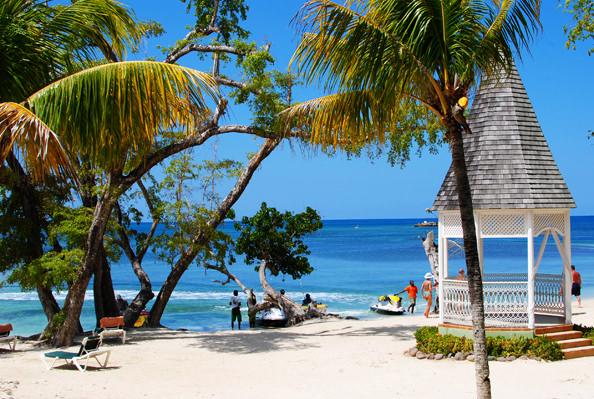 Plus, did I mention the view?! 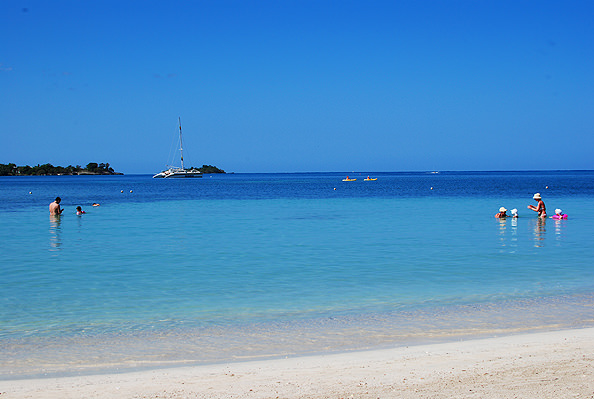 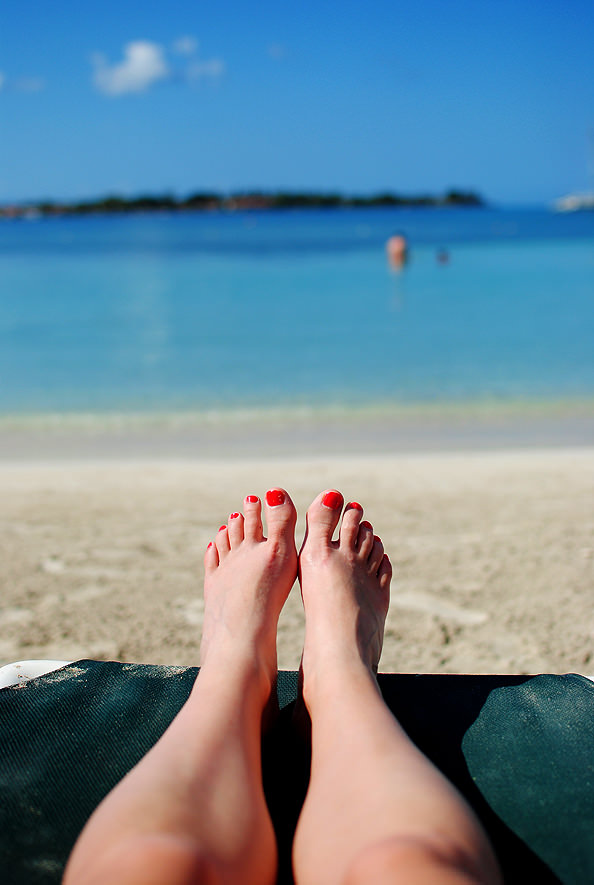 I was not joking when I said the water was as warm as bathwater , and Ben and I spent several days laying in it at the base of our chairs, digging up sea shells while sipping drinks we’d take turns getting from the beach bar about 20 feet away. 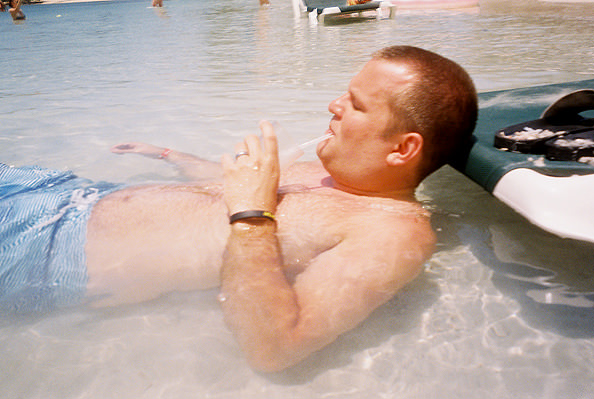 The hotel also offered several free water activities, including snorkling, and sea kayaking. I begged Ben to go with me on the last day, and let me just say, sea kayaking is harder than it looks! 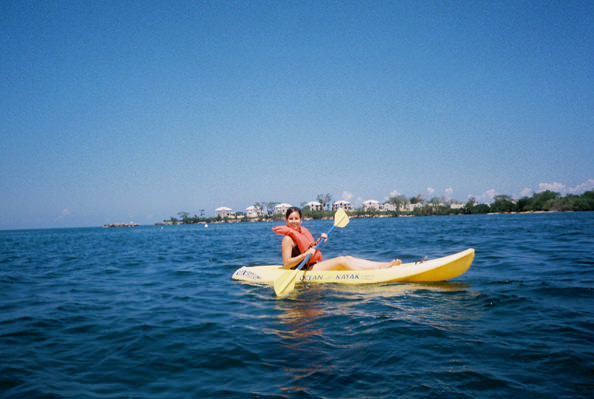 There is a ton of marine life to see in the bay including sting rays, star fish, puffer fish, and sea urchins, so step carefully when you’re in the water! 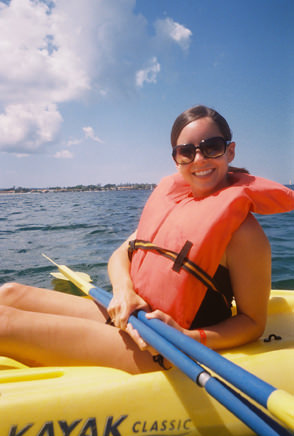 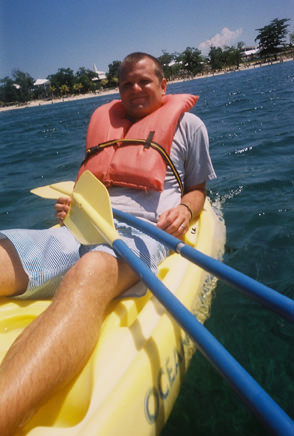 If the sea isn’t your thang, there are two pools to dip into, including one with a swim up bar.

Speaking of bars, they were pretty much everywhere, serving up drinks aplenty, all day long, and all included in the price of the hotel. 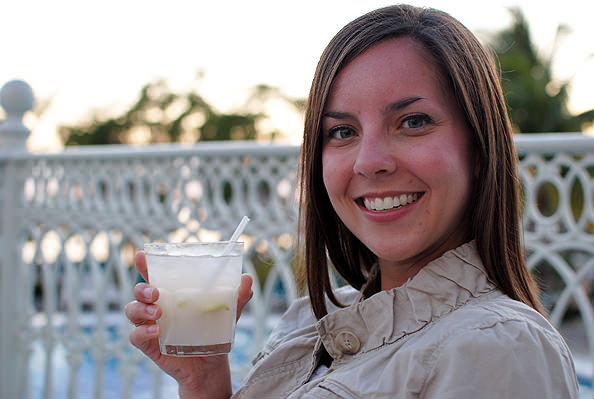 There was nightly entertainment in a little theater-like area, but we never caught a show as we were in bed by, cough 9pm cough, most nights. Too much vitamin D… (or fun!) 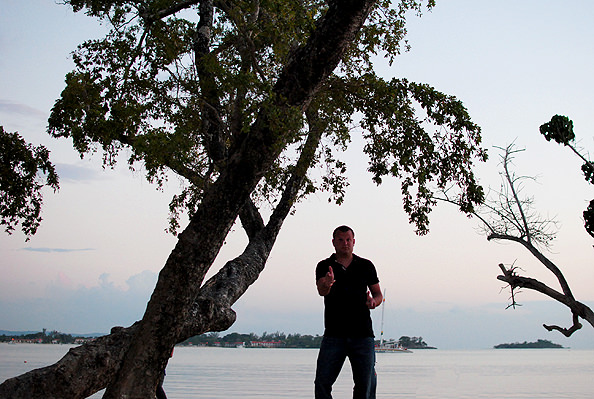 Besides our all day tour, we ventured out one other afternoon to walk along Negril’s famous 7 Mile Beach. While it was absolutely beautiful, – please don’t hate, 7 Milers – we much preferred staying in Bloody Bay. Although we only went south starting at Margaritville on 7 Mile, there were just way too many people selling “stuff” on the beach for our liking. I do hear that the area north of Margaritaville, around the Couples Swept Away hotel, is very, very popular though. 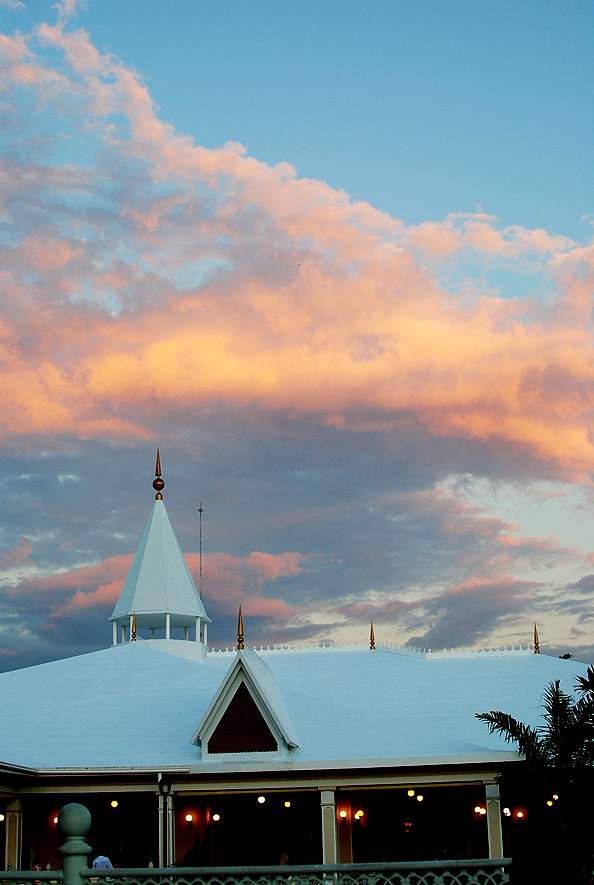 I’d give the RIU ClubHotel a solid 3.7 stars out of 5. The rooms were comfortable and quiet, and the food was fresh and plentiful (the beach shack jerk chicken was SPECTACULAR!) What really counts in my mind – the view, the beach, the staff – was top notch. I would stay there again.

Jamaica is the ULTIMATE relaxation destination. Omar made it very clear the day he picked us up from the airport that you are on island-time when you come to Jamaica. Everything moves a little bit slower there, so be patient, and set your worries aside, mon!

A couple other things I would tell my friends and family before visiting, therefore I’m telling you, is that from what we saw and experienced (I don’t want to generalize an entire country) the areas in and around Negril and southwest Jamaica, where we toured, were very, very poor. I had friends tell me this, but I was still not prepared for what I saw. While we enjoyed ourselves immensely during our vacation, it was at times sad and unsettling staying at such a beautiful, luxurious resort, when I knew that 100 yards away there were entire families living in 8×10″ boxes balanced on rocks. I don’t think I really need to get into it, but just understand that Negril is not a standard resort town like Cancun or Puerta Vallarta, where you go out and shop at these mega complexes or town centers or anything. I don’t know if Montego Bay and Ocho Rios, other popular Jamaican vacation destinations, are similar.

I was also not prepared for the amount of pot we encountered during our trip! We either saw or smelled it nearly everywhere we went during our stay, and although we were approached to buy many times during our stroll on 7 Mile Beach, we were never bothered in Bloody Bay. Nobody was every pushy about it or anything, I just thought I’d mention it.

Overall Jamaica is a very unique, and unimaginably beautiful country. Definitely Top 3 most stunning places I have ever seen, and hands down the most relaxing place I’ve ever been. If you want to get away from it all, go to Jamaica. And tell ’em Ben and I sent ya’!

Island In the Sun

The Jerk Chicken Shack + The Best Rice, Ever.