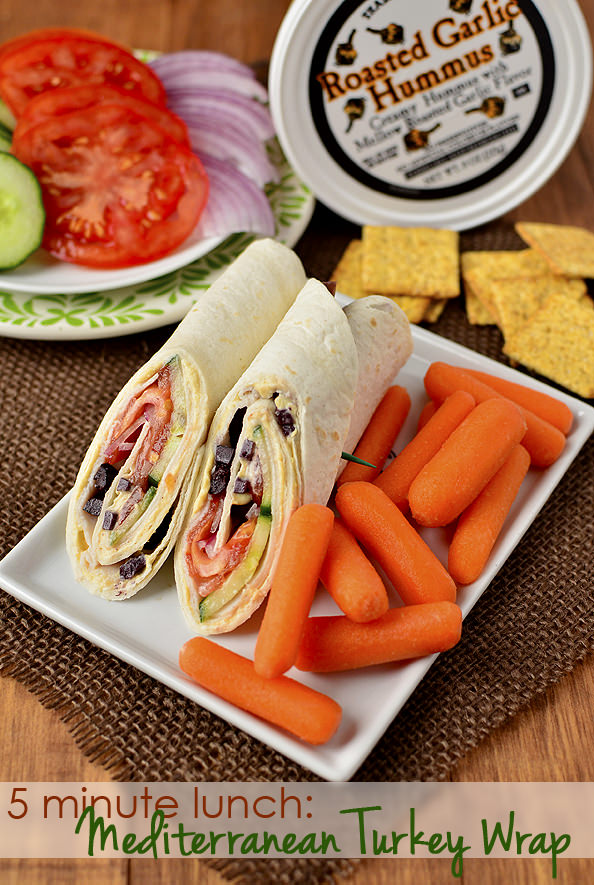 It’s time for another edition of the 5 Minute Lunch!

A 5 Minute Lunch is a meal that can be prepared in 5 minutes or less, stashed in a bag or cooler, and then eaten standing, sitting, or on the go later that afternoon. It’s gotta be quick, it’s gotta be convenient, and it’s gotta taste good, natch!

The inspiration for this wrap came from Ben, or rather, what he had for lunch earlier this week. As he described the soft wrap rolled with creamy hummus, deli turkey, kalamata olives, and fresh tomato, cucumber, and red onion, which he ordered with some co-workers at a local deli, my mouth started to water. That sounds awesome! I proclaimed, at the exact same moment he declared, IT WAS AWFUL. 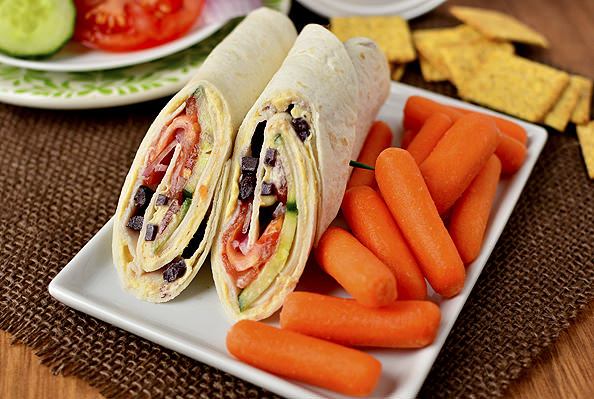 My main man isn’t a huge fan of hummus you see, but had ordered it anyways because it was the “healthiest” thing he could find on the menu. God bless ’em!

I decided to recreate the wrap at home anyway because even if you don’t love hummus as much as I do, you can control the amount you slather into this wrap. Plus it’s filled with fresh and healthy veggies for a boost of vitamins, and lean roasted turkey to help fill you up. It is SO good plus, you guessed, it’s ready in just 5 minutes! 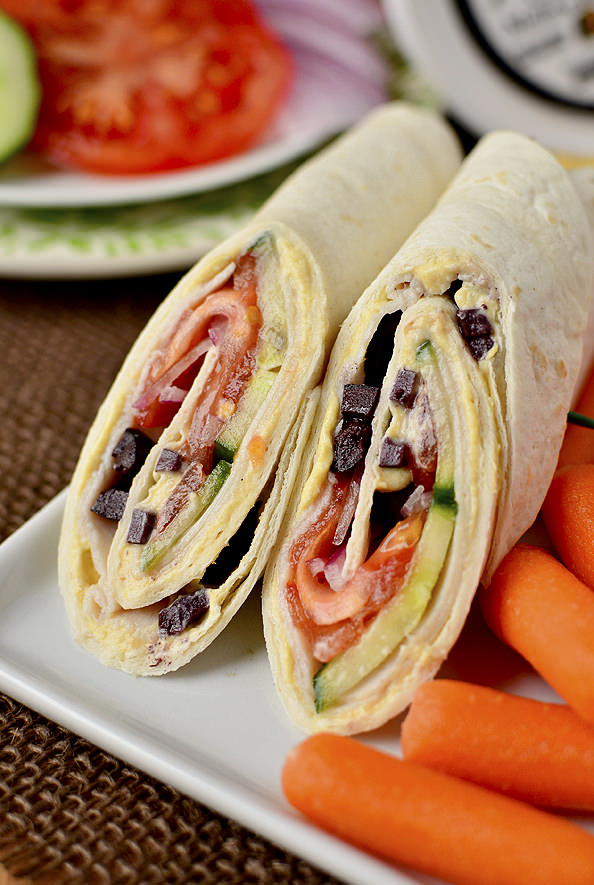 Start the Mediterannean Turkey Wrap with 1 flour tortilla – any kind you like. I usually go for Whole Foods brand whole wheat tortillas, or Mission’s carb-control wraps. Lay it out on a clean, dry surface. 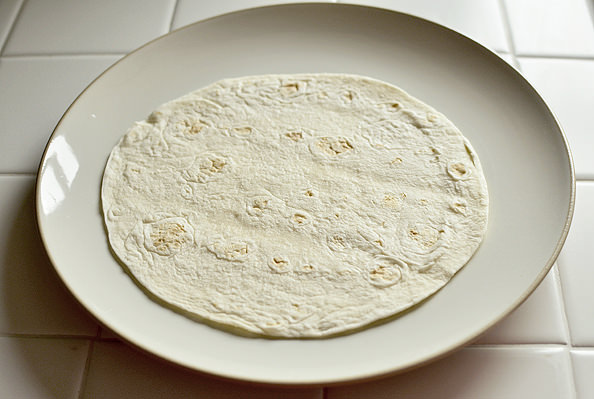 Next slather on 2-3 Tablespoons hummus. Again – any “flavor” you like! I’m next level obsessed with Sabra’s Roasted Red Pepper Hummus (and I even hate roasted red peppers) but snagged this Roasted Garlic Hummus from Trader Joe’s when I was there the other day. It’s fantastic! Not quite as silky smooth as Sabra, but not grainy like other brands I’ve tried.

Next layer on 2-3 slices roasted deli turkey. I usually try and get the low-sodium variety and can’t taste a single difference.

Note: some sources advise pregnant women to stay away from deli meat. Make the best choice for yourself based on your research and what your doctor tells you. I personally have eaten deli meat only a couple times, and always from a package, not the deli counter.

Now that we’ve gotten the protein part of the wrap taken care of with hummus and deli turkey, it’s time to turn to some fresh produce to jazz it up! 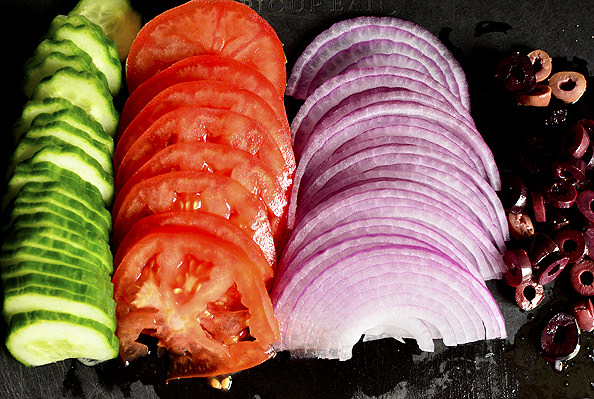 Layer on thin slices of cucumber, tomato, and red onion, and sliced kalamata olives. The key to making sure your wraps are smooth when rolled up and don’t get soggy, is to slice your veggies thin, thin, thin, and especially with tomatoes, squish out the wet seeds. 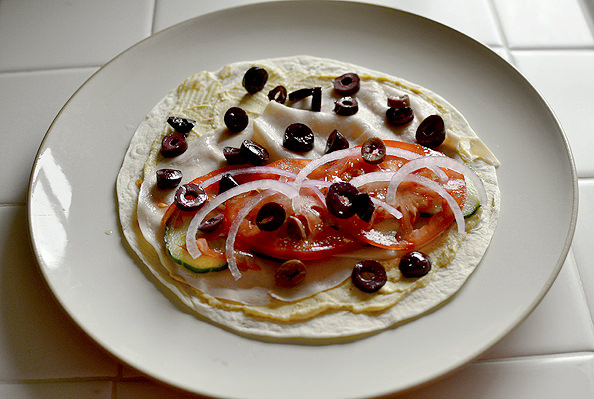 Next, start at one end and roll ‘er on up! 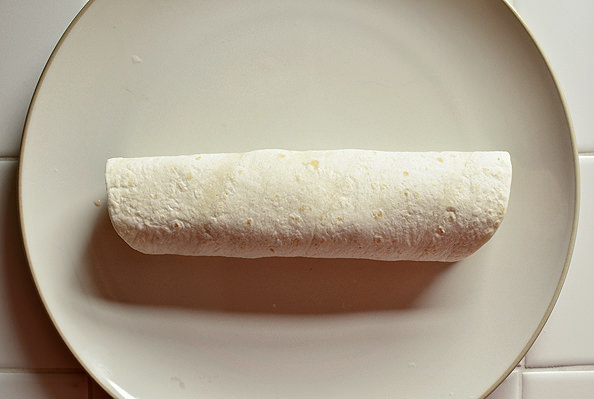 Slice on the diagonal, stash in a plastic bag or container, and when lunchtime comes around – chow down! 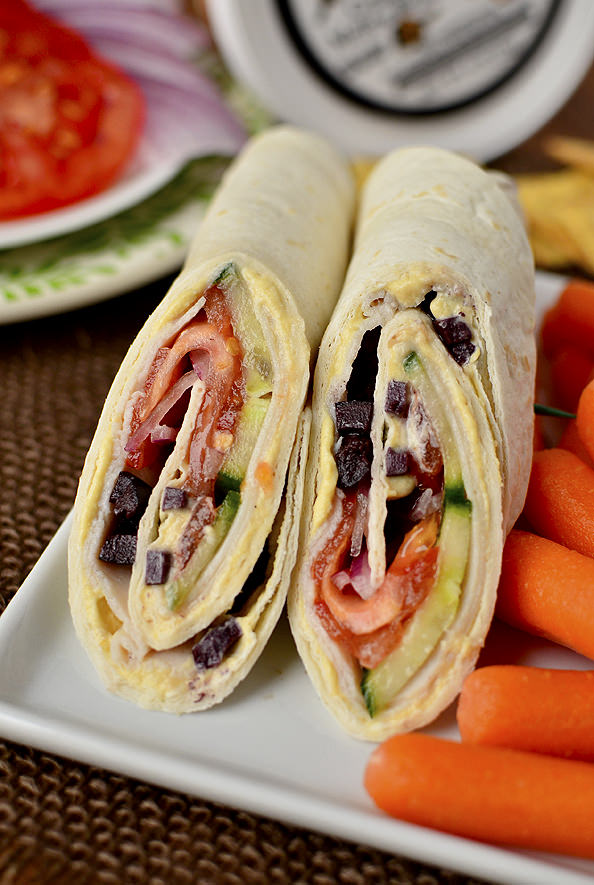 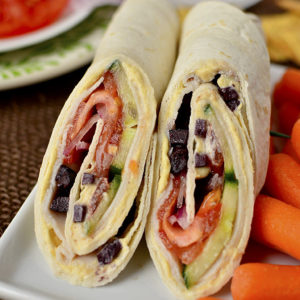 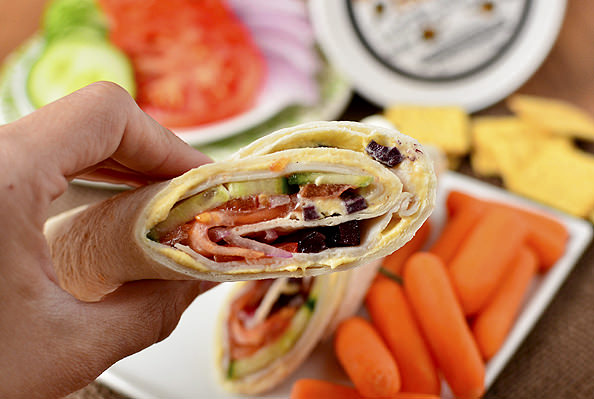 You will totally dig this easy wrap! Make 1 or 2, and even add in some extra goodies like baby spinach or salty feta, if ya’ like. Hope you enjoy! 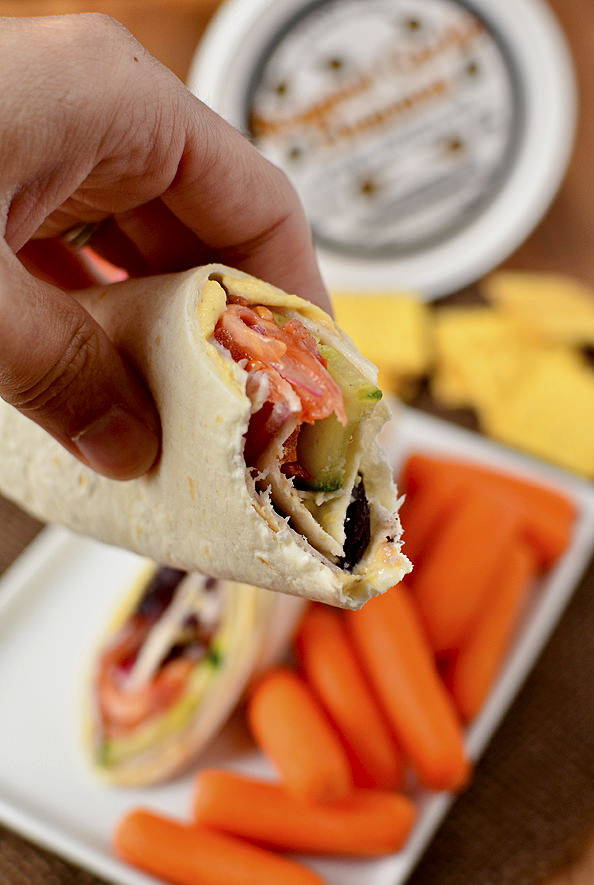