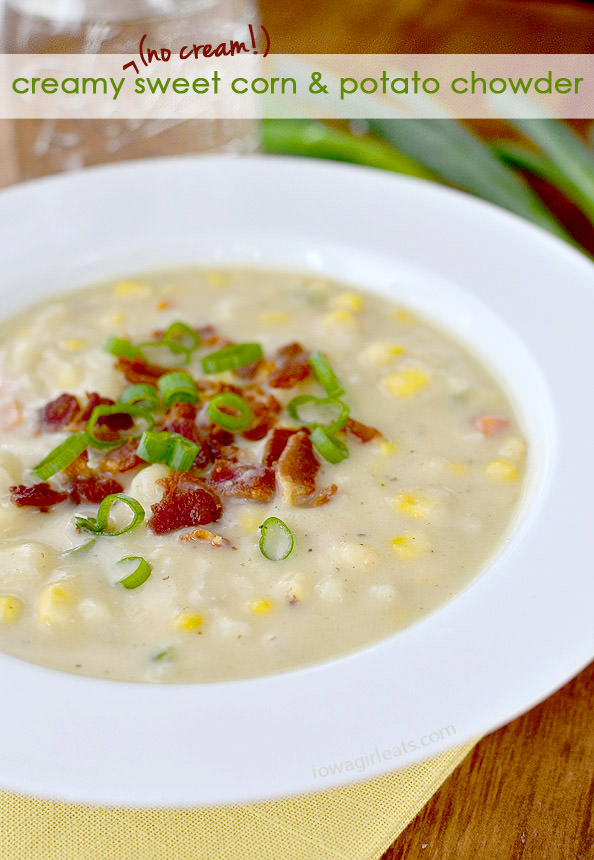 The past month has been absolutely brutal weather-wise for what seems like the majority of the country, so when I polled my Facebook friends a few weeks ago to see if there was still time to post a chowder recipe even though Spring is technically right around the corner, every single person who answered said, BRING IT ON! More or less.

So I did. I’ve been excited to share the recipe for Creamy (No-Creamy!) Sweet Corn and Potato Chowder with you for weeks!

Then earlier this week we had the most glorious day of the year. 70 degrees, sunny skies, and a light breeze afforded Lincoln and me a trip to the park where I plopped him into a swing for the first time while he blew raspberries signifying his approval, I was able to get out for an epic run later that evening, then we capped the day off with dinner on the grill. Simply seasoned chicken with a side of grilled kale. I had a bunch leftover in the fridge and wanted to see what happened when I tossed it onto the hot grates. It turned out awesome!

Toss curly kale (the lacinato ended up kind of limp) that’s been cut off the stem with extra virgin olive oil, garlic salt and pepper then grill until lightly charred – just a few minutes. The leaves get crispy and the smoky flavor from the flames is to die for. Can’t wait to have it again!

Anyway, like I said, I’d been planning on sharing this chowder recipe for a few weeks then it went and got all nice on me. Totally not complaining, but who wants chowder when it’s 70 degrees out?! Well, Mother Nature threw me a bone and we went straight back to 40s with flurries in the forecast. I think the East coast is clawing out of a foot of freshly fallen snow as we speak so I’m going for it!

Creamy (No Cream!) Sweet Corn and Potato Chowder is a revelation. It’s unbelievably thick and creamy, as any good chowder should be, but guess what? It’s thickened with NO flour and contains ZERO cream. What makes it thick and creamy? CAULIFLOWER!

Seriously though, the base of this chowder is made from cauliflower simmered in chicken broth then blended with milk, salt, and broth until it’s the texture of thick, whipped velvet. No flour or cream needed. The recipe comes from the incredibly talented Lindsay from Pinch of Yum, who recently came out with an entire cookbook based around this sauce (<– affiliate link.) Think alfredo sauce without the guilt. 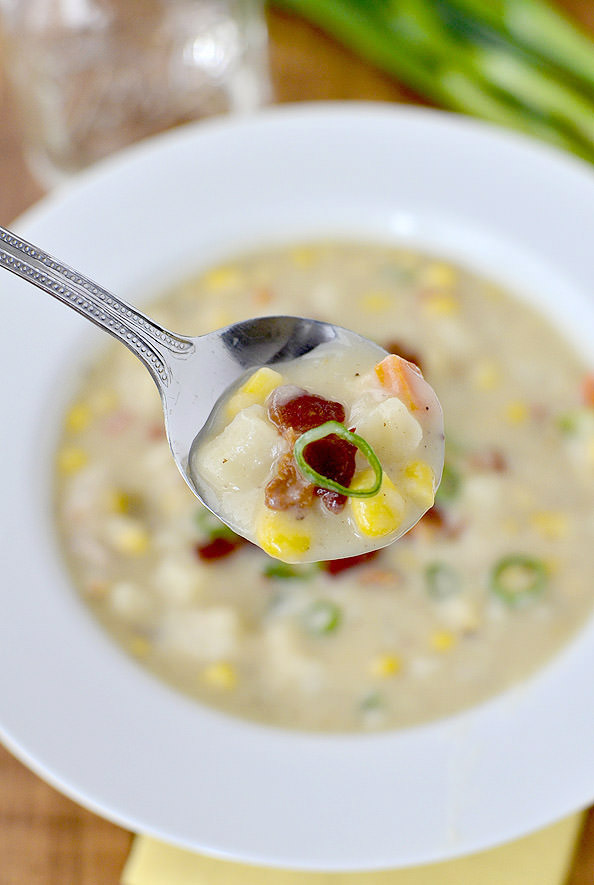 The sauce is combined with convenient frozen hash browns and super-sweet frozen corn then simmered until everything is tender. Oh, there’s bacon involved too. Can’t have chowder without bacon!

Go ahead and have seconds or thirds of this guilt-free, satisfying chowder. And make it quick, before Mother Nature changes her mind again! 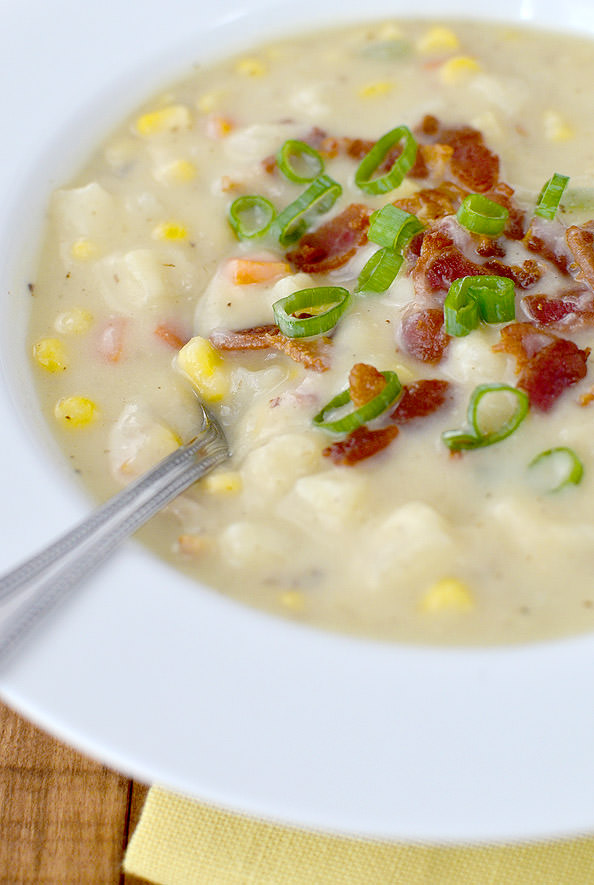 Start by making the creamy cauliflower sauce. This stuff has seriously changed it all for me! Bring 5 cups chicken broth to a boil in a large soup pot then add 6 cups cauliflower florets. Place a lid on top then cook until fork tender. Make sure not to overcook the cauliflower or the sauce can end up grainy. 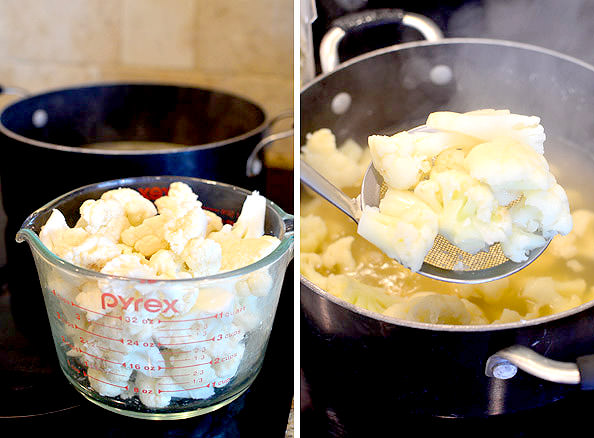 Meanwhile, peel and mince (or press) 3 garlic cloves then saute in 1 Tablespoon butter until golden brown. You can make this recipe dairy-free by sauteing the garlic in extra virgin olive oil instead. 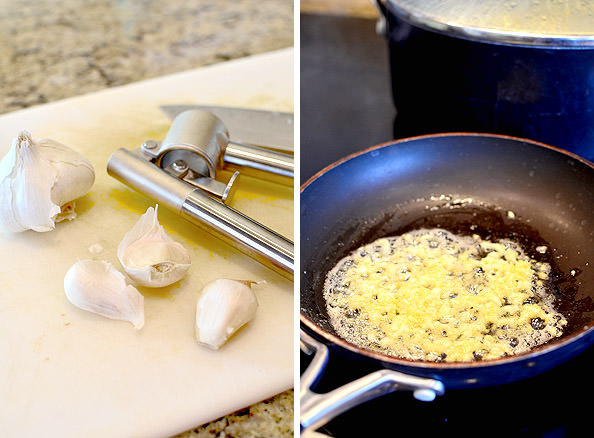 Add the cooked cauliflower plus 4 cups of the cooking broth into a blender along with the garlic butter. Save the remaining cup of broth in a separate dish – we’ll use it in a bit. 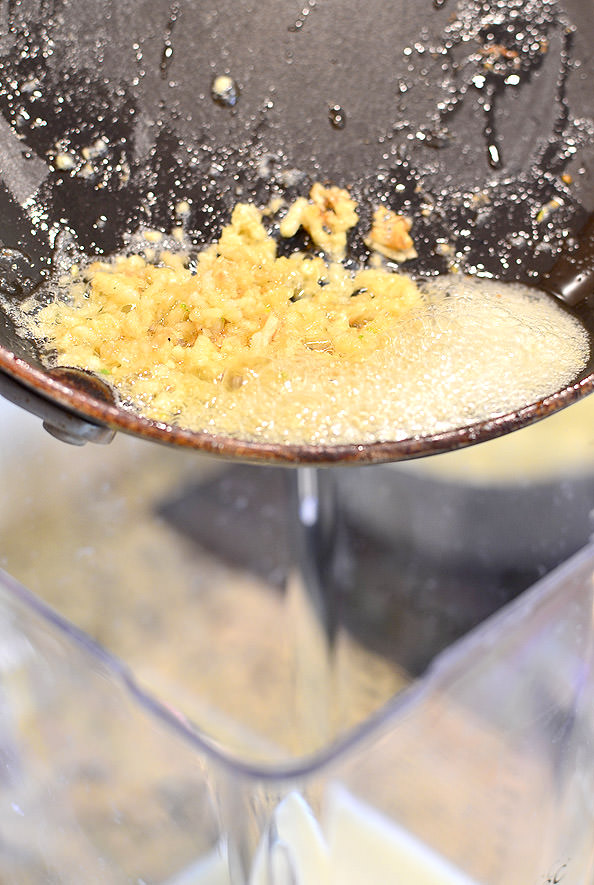 Next add 1/2 cup milk to the blender (use whatever you’ve got on hand, including an unflavored milk alternative if you want to make it dairy-free,) along with 1/2 teaspoon salt. 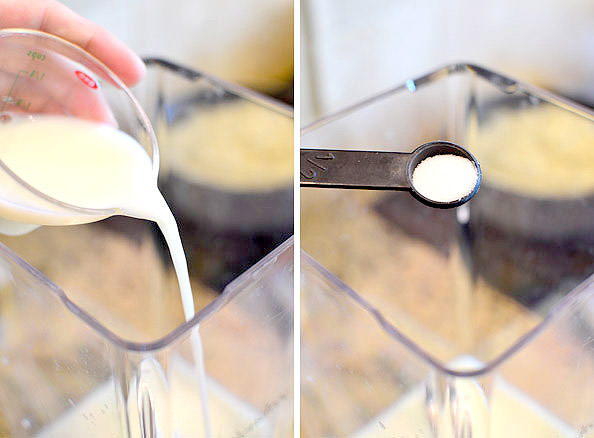 Pop the top on the blender then let ‘er rip! That is to say, blend until the sauce is very, very smooth. If you have a small blender you’ll want to do this in two batches. 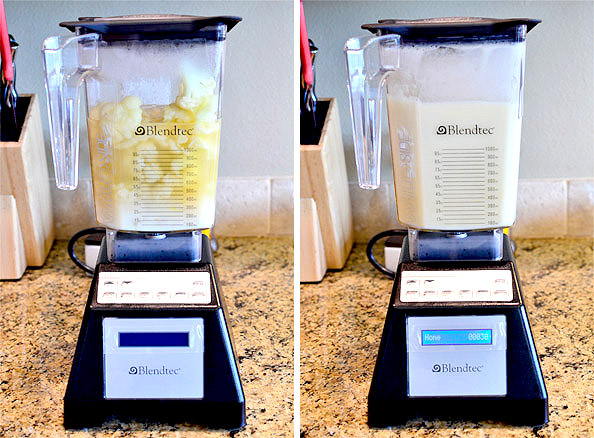 Insanely creamy without the cream! 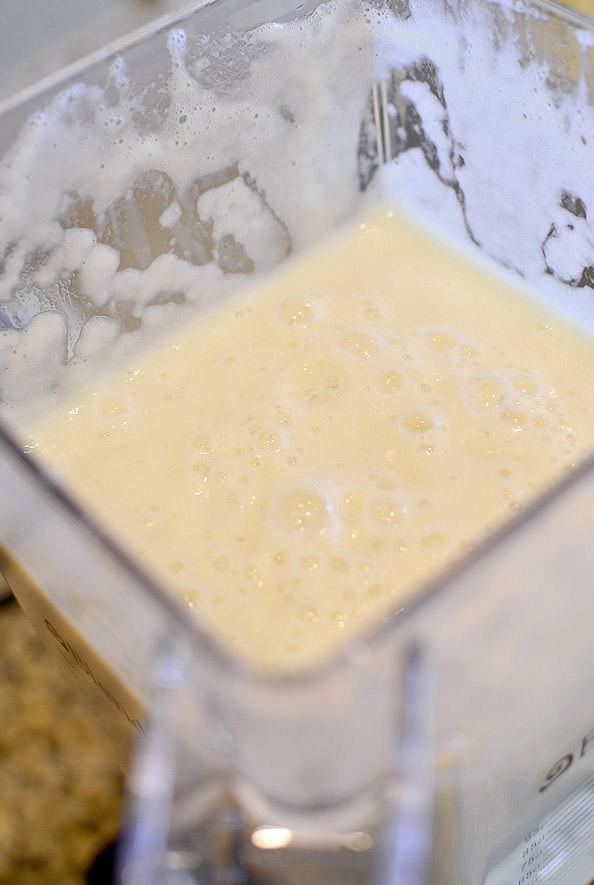 Ok. Set the cauliflower sauce aside for a sec then saute 6 slices chopped bacon in the same pot you used to cook the cauliflower, over medium heat. Remove the bacon to a paper towel lined plate to drain then remove all but 2 teaspoons bacon fat from the pot. 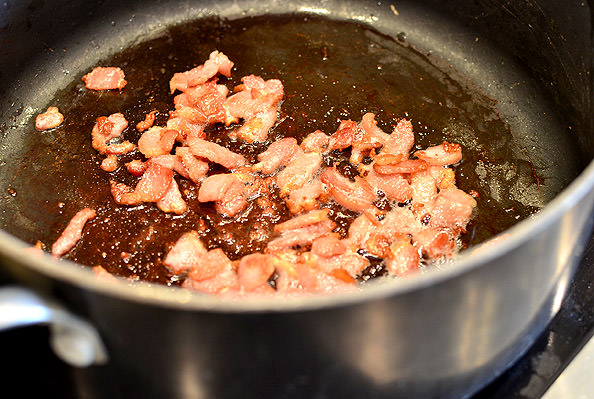 Next add 1 chopped carrot, 1 chopped celery stalk, and 1 chopped shallot, season with salt and pepper, and then saute until the veggies are tender, 5-6 minutes. 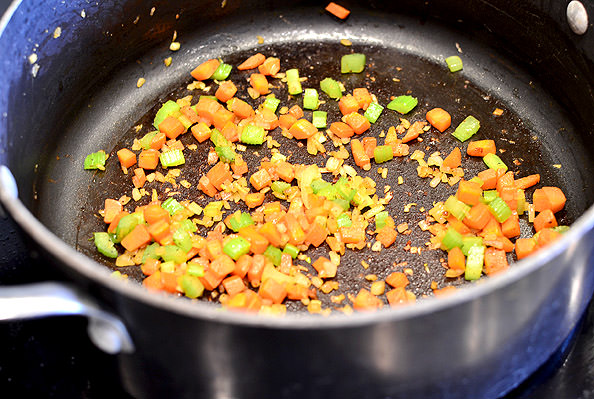 In goes the creamy cauliflower sauce PLUS the reserved cup of chicken broth. 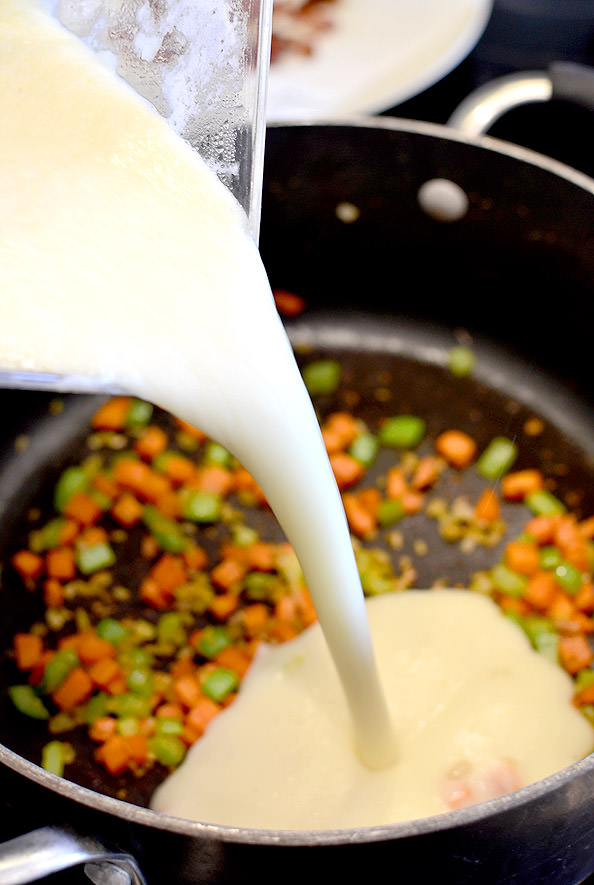 And 4 cups frozen hash browns (don’t thaw.) Place a lid on top of the pot then turn the heat up to medium-high and simmer for 8-10 minutes, or until the potatoes are tender. 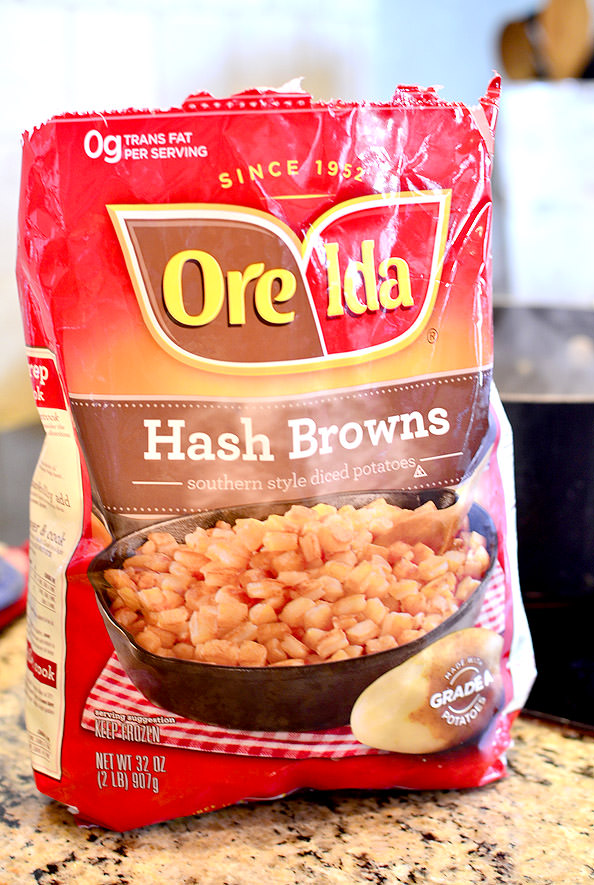 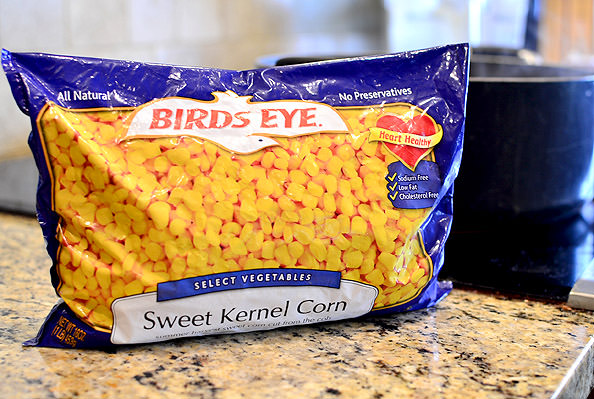 Stir the cooked bacon back in, taste and adjust salt and pepper if necessary, then ladle, serve, and marvel over the fact that you achieved chowder nirvana with CAULIFLOWER! 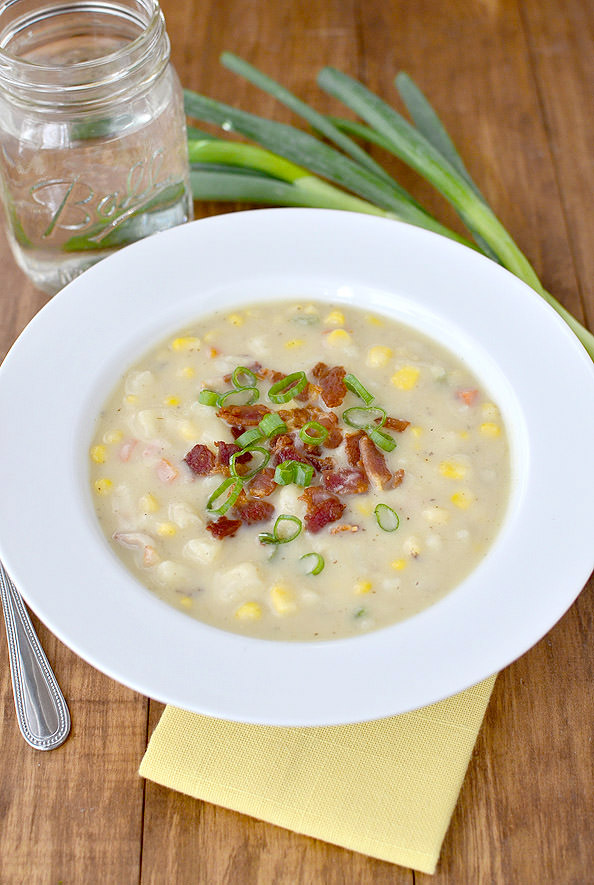 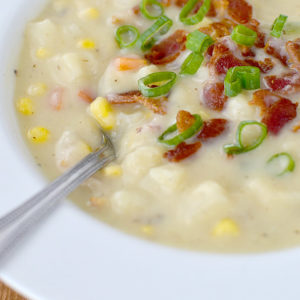 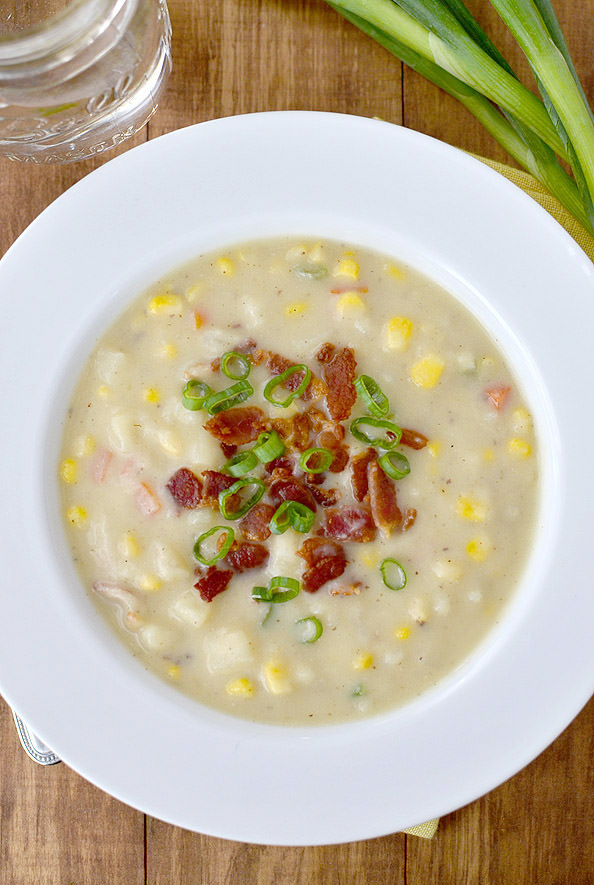 Creamy and thick with pops of salty bacon, sweet corn, and satisfying potato. Hope you love this as much as I did! 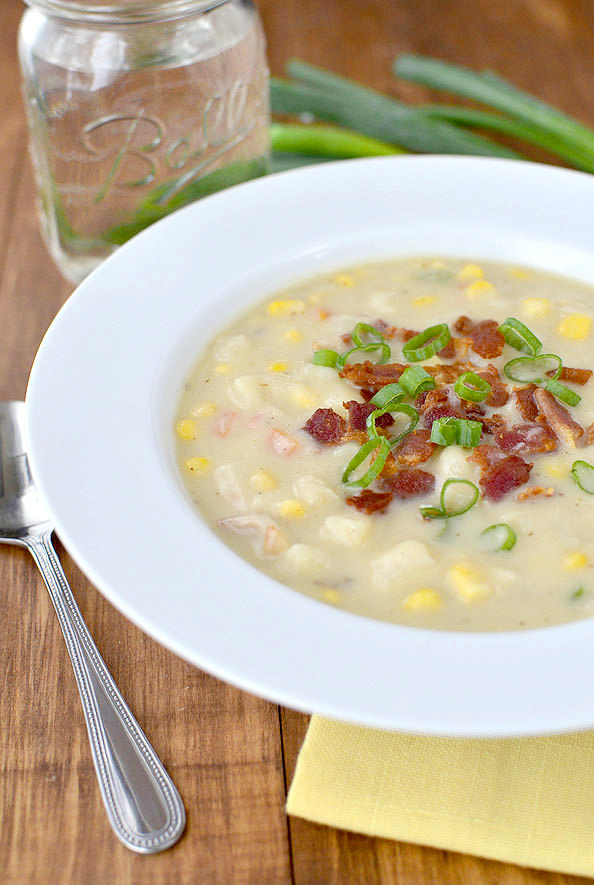