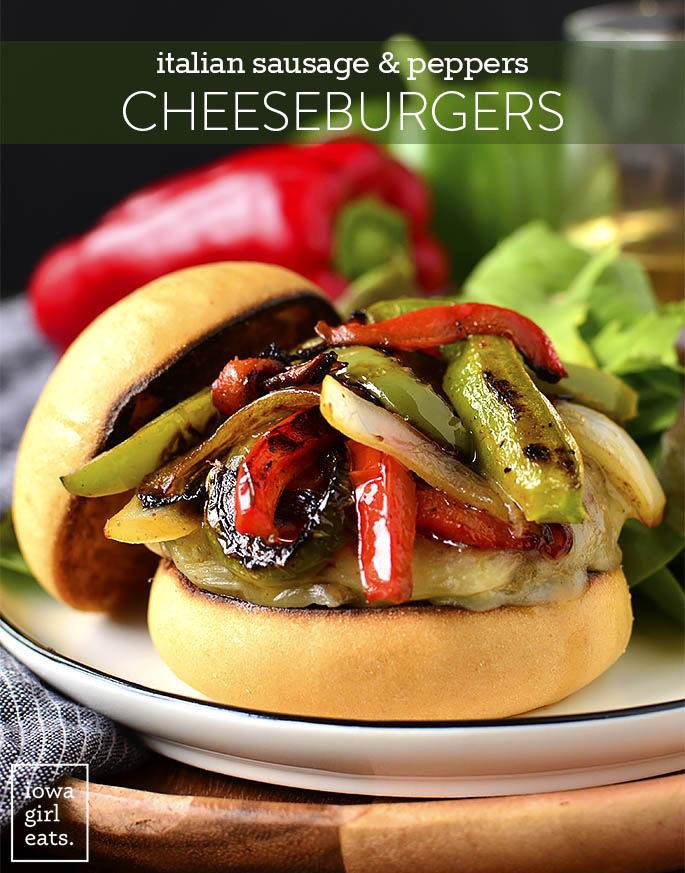 We eat burgers at least once a week because it’s summer and well, that’s whatcha eat in the summer, and also because it’s kind of brainless and some days it feels like brain cells are in short supply. Anyone else set timers that go off and you have no idea what they’re for? Just me? Cool cool.

Anyway, the boys always order burgers from our favorite restaurant so I think they think they’re fancy and thus get super excited anytime burgers are on the menu. Usually I cook up beef burgers topped with cheese and ketchup in Cam’s case, nothing in Lincoln’s case #purist, and bacon and cheese in Ben’s and my case (mmmm bacon cheeseburgers,) though I am officially claiming NEW FAVORITE BURGER ALERT because these Italian Sausage and Peppers Burgers are TO DIE FOR!!!!

Seriously, I am freaking out over this mash up of cheeseburgers and Italian sausage and peppers which can be made in a skillet on the stovetop, or sizzled up on the grill. SO fast, SO easy, and SO dang delicious. 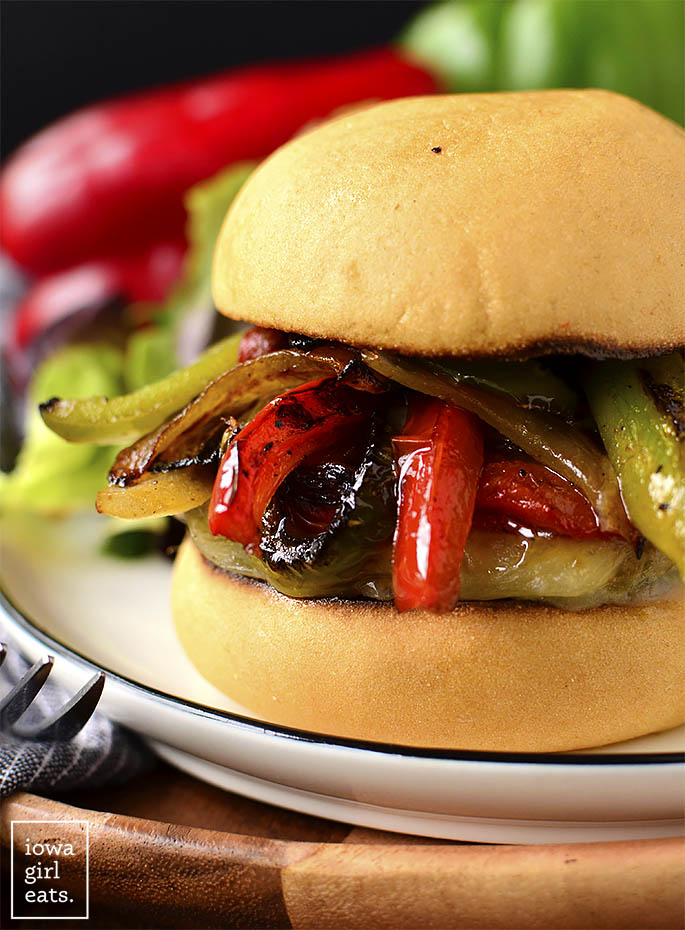 Last week I shared the recipe for my Homemade Ground Italian Sausage, which forms the base of these cheeseburgers. Instead of crumbling and browning the sausage though, I formed them into patties, cooked them up, then slathered them in provolone cheese and seared peppers and onions. Like I said – to die for! These cheeseburgers are a dead ringer for my Crock Pot Sausage and Peppers except they’re quick and easy, and made with HOMEMADE Italian sausage, ie you know exactly what’s in them. They are unbelievably delicious.

I also want you to know that the components of this recipe are perfect for prepping ahead of time. Make the sausage/form the patties and slice the peppers and onions up to two days ahead of time then seal everything tightly and refrigerate. They’re ready to rock when you’re ready to eat and dinner will be on the table in about 15 minutes. Yes!

Now, fellow gluten free peeps: you and I know that a good GF bun is hard to come by and I’m happy to report that I actually enjoyed the Schar hamburger buns seen in these photos. They were somewhat dense, like most GF buns are, but also soft and not crumbly whatsoever. They’re also egg and dairy free in case you need that. I’ll share with you below how I prepared them for these Italian Sausage and Peppers Cheeseburgers. That said, I’m currently eating one that I’ve reheated for lunch, sans bun, and it’s just as fabulous. Bun or no bun – I cannot wait for you to try these burgers! 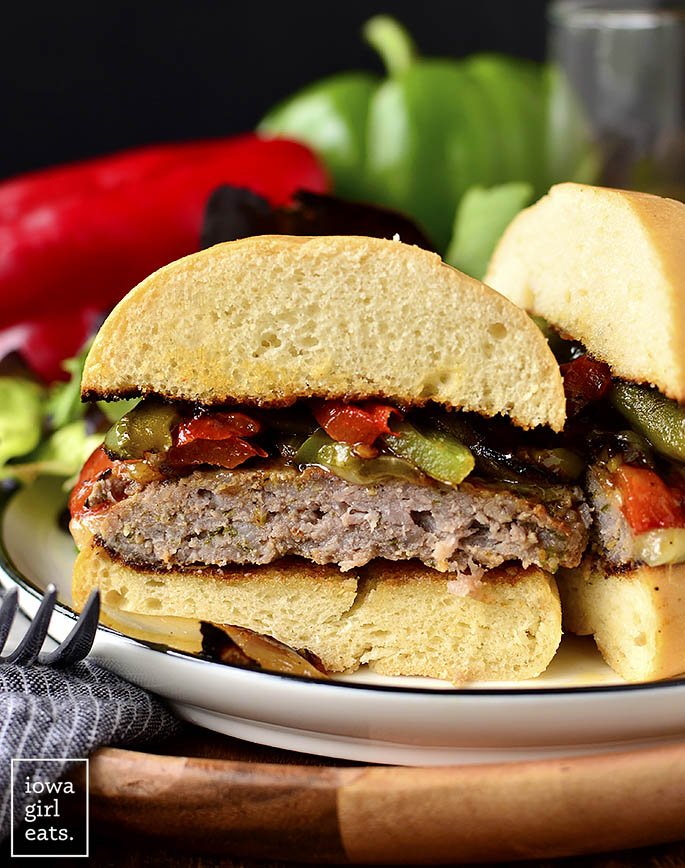 How to Make Italian Sausage and Peppers Cheeseburgers

Start by making a batch of my Homemade Ground Italian Sausage using just ONE tablespoon of oil instead of the two that’s called for in the recipe. Shape the mixture into four burger patties then set aside.

Place a large skillet over heat that’s just a touch above medium then, when it’s hot, add the patties and cook for 4-5 minutes per side or until the burgers are cooked through. Place a slice of provolone cheese on top of each patty then place a lid on top of the skillet and allow them to melt. Alternatively, you could do all of this on the grill. 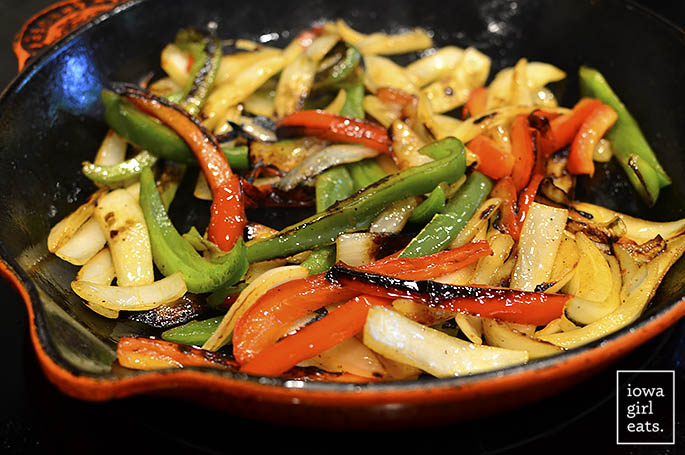 That’s all she wrote! Place the cheeseburgers on top of buns (I misted these Schar buns with extra virgin olive oil then sprinkled with garlic salt before broiling – HIGHLY recommend,) then pile the seared peppers and onions on top and dig in. I hope you love these cheeseburgers with a twist as much as I do! Enjoy, enjoy! 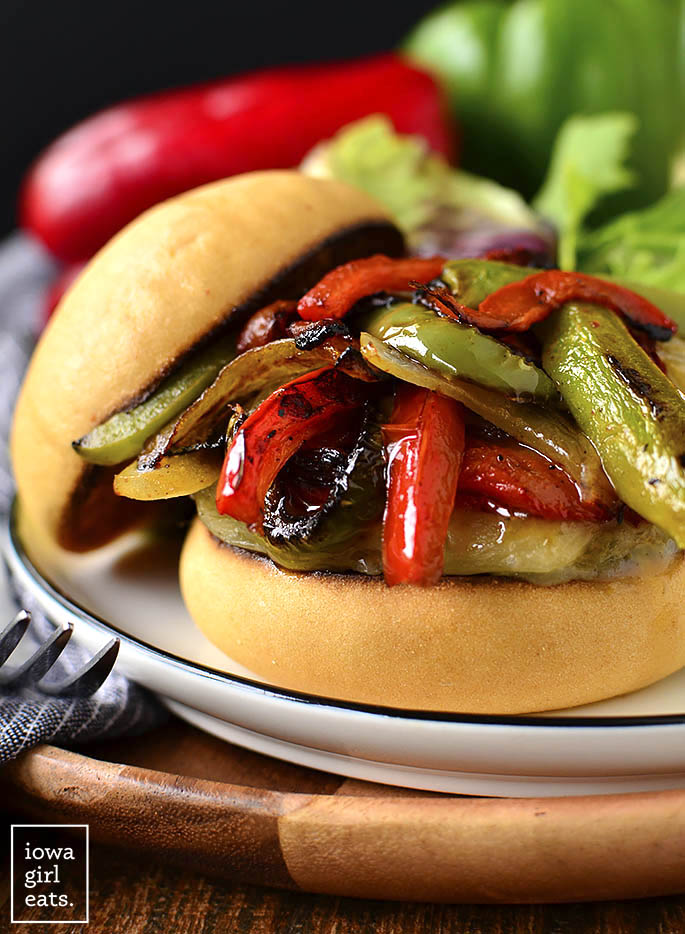 Italian Sausage and Peppers Cheeseburgers are craveable! This gluten free dinner recipe is quick, easy, and lick your plate worthy! 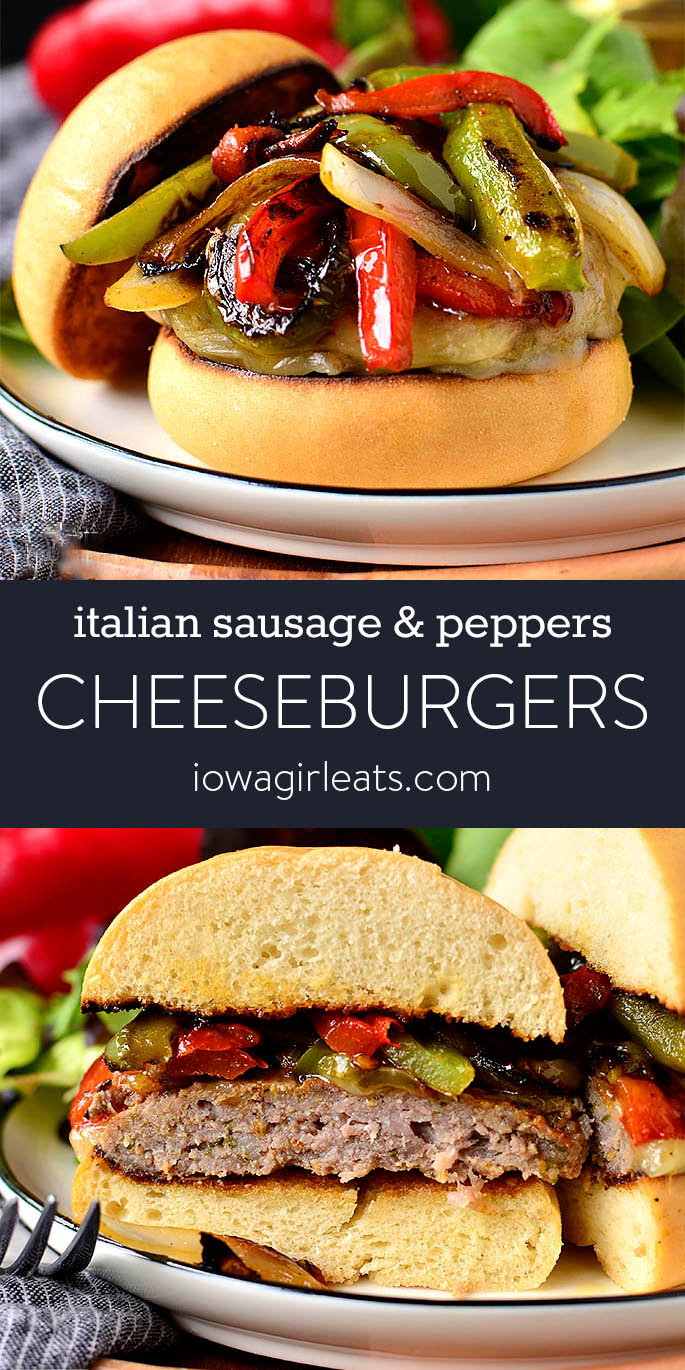