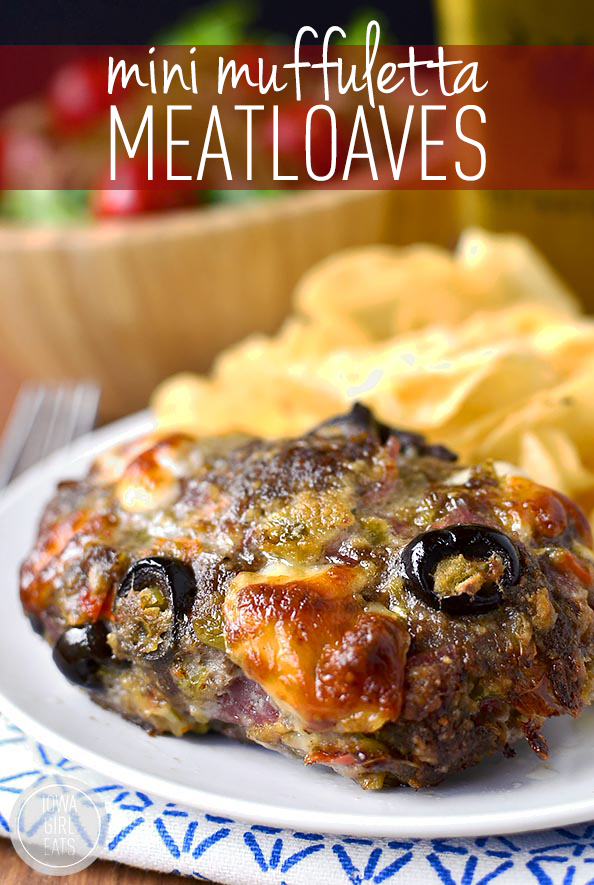 Time for another round of things I’m into!

House hunting. Ben and I have got the itch again! We won’t move this year or probably even 5 years from now, but we’ve officially resumed our weekend country drives to see what’s out there. Do you ever house hunt just for fun? We can’t seem to get an acreage off our mind…

This bubble blower. I nearly passed out last week from blowing “buhboh” after “buhboh” for Lincoln in the summer heat. This baby satisfies my baby’s love for all things bubbles and my love for, well, not passing out from blowing bubbles. Win/win!

Cicadas. They’re baaa-aack! I’d been missing their siren song (which Ben thinks sounds like nails on a chalkboard!) all summer then finally got the late night chorus I’d been waiting for while sitting across from the White House waiting for the fireworks to start on the 4th of July. Ahh, the shrill sounds of summer.

THIS STUFF. THIS. STUFF! My Mom picked up a jar a few months ago and to be honest I thought she was crazy. It’s for burgers! she insisted. It’s gluten-free! she pointed out. My Mom buys anything and everything she sees that’s gluten-free, God bless her thoughtful soul. Sometimes the products are questionable (cough, a spongy bun that shall go nameless,) but usually they’re rock your face off delicious, like Olive Muffalata from That Pickle Guy! 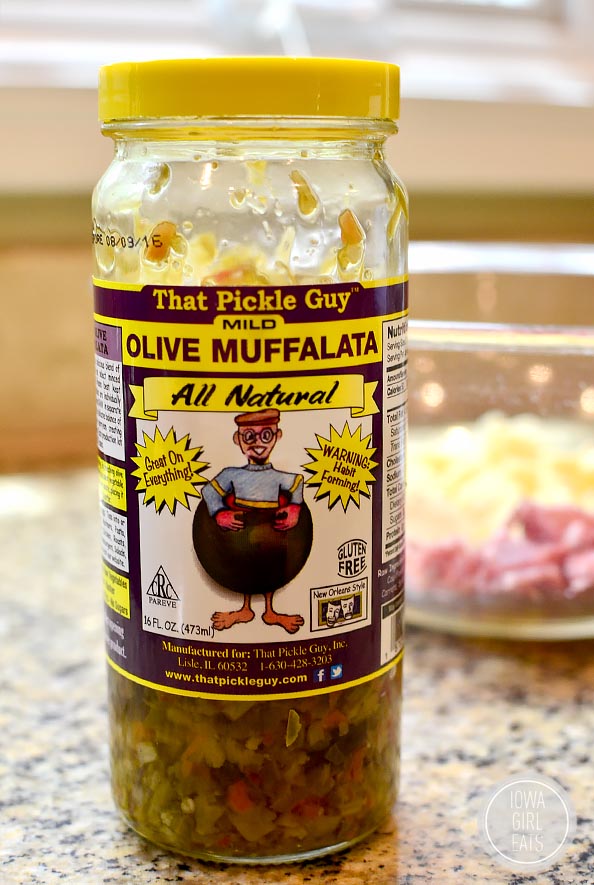 Since she turned me onto this decadent-tasting Olive Muffalata Mix, a combination of chopped olives, cauliflower, peppers, celery, carrots, spices, and oil, I’ve been putting it on everything. It satisfies my pickle craving, because I’m paranoid about which pickles I can eat as a Celiac (vinegars…it’s a long story,) and like the jar says, tastes good on just about anything. Especially mixed into big salads with chopped turkey, and ESPECIALLY when mixed with ground beef, chopped salami, and diced cheese like in my Mini Muffuletta Meatloaves!

Although these portion-controlled mini meatloaves may not be total lookers they’re as high on my current obsession list as the muffalatta mix that’s in ’em. I have been eating them like crazy lately. 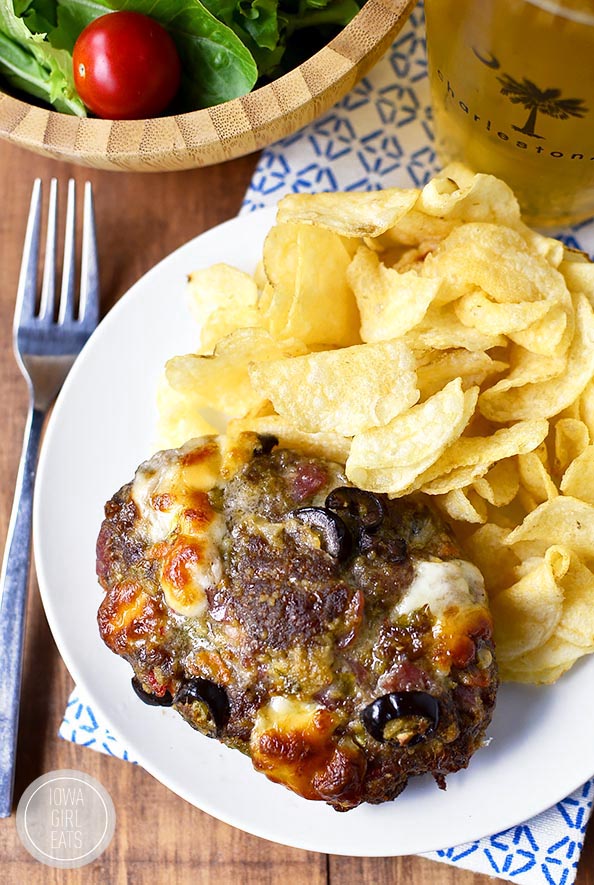 The first time I ever had a muffuletta sandwich (yes I’m aware I’m spelling it two different ways – the mix is spelled differently than the sandwich, for whatever reason!) was on the first day Ben and I stepped foot in New Orleans over five years ago. I’d already planned on ordering the NOLA staple before touching down in the Big Easy and didn’t waste a minute scooting to a nearby restaurant once we unpacked.

In one hand I held a fat, fluffy sandwich layered with thinly sliced meats, cheeses, and a salty olive spread, and in the other a spoon scooping rich and savory Jambalaya in alternating bites. My life, at that moment, was pure bliss. Then I had a handful of Ben’s Zapp’s chips for dessert and decided right then and there I was never leaving.

Fast forward five years later and, while I’ll never be able to eat fluffy white bread again, I can transform the festive flavors of a traditional muffuletta sandwich into a fabulous, cheesy, savory mini meatloaf. I did not miss the bread one bit! 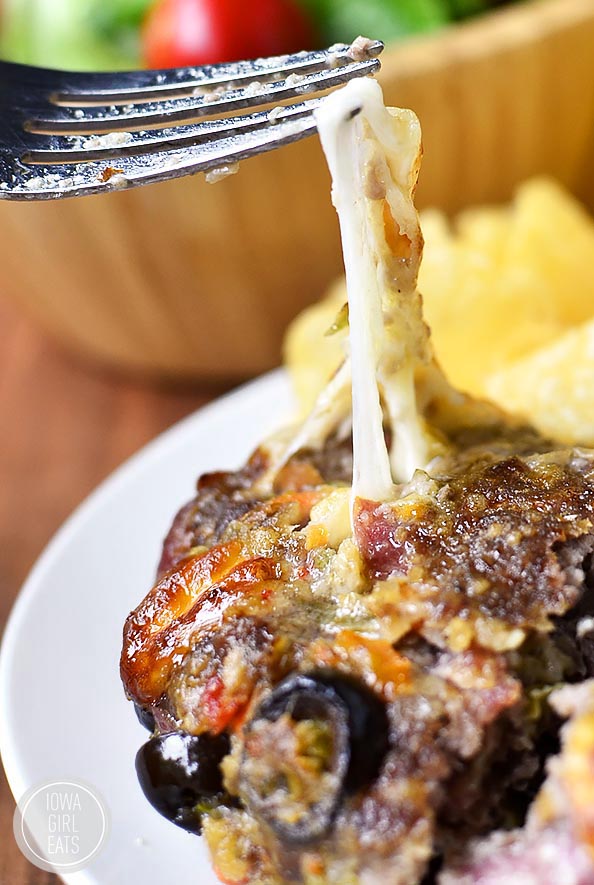 Start by chopping 2oz salami then placing it in a big bowl. 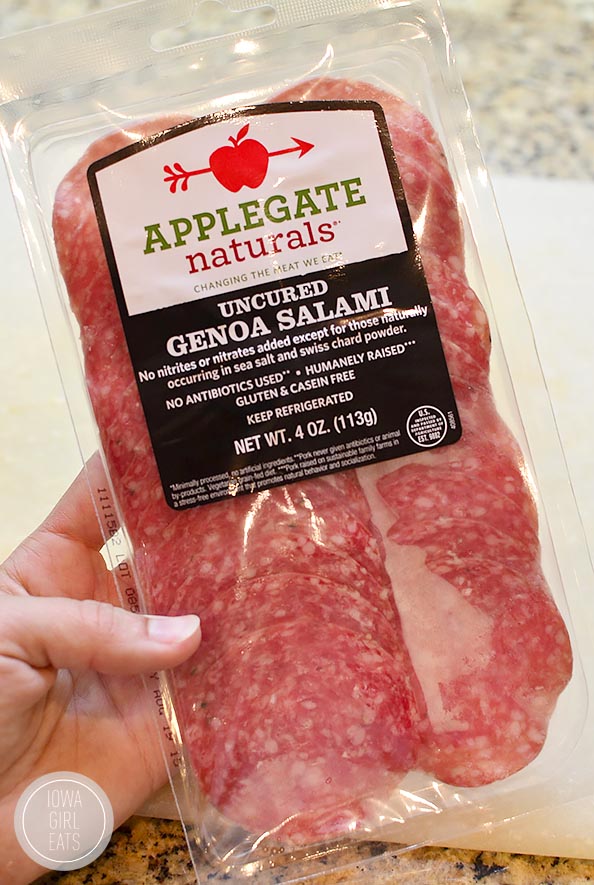 Just stack the salami then slice, turn, and chop. The salami adds SO much flavor to these mini meatloaves – you’ll love it!

Next chop 2oz provolone cheese into 1/4″ cubes. Provolone is traditionally found sliced in muffuletta sandwiches and it positively rocks in these mini meatloaves both for its mild taste and melting abilities. 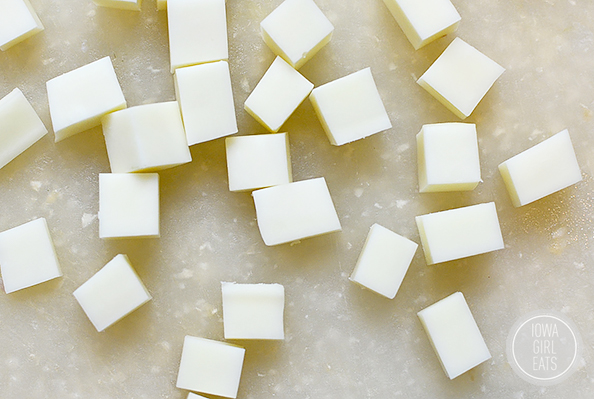 Time to break out zee star of these mini meatloaves – the Muffuletta Olive Mix! As I mentioned, this stuff is very versatile and I found it in the “health/specialty foods” section of my grocery store HyVee, as well as at Whole Foods. 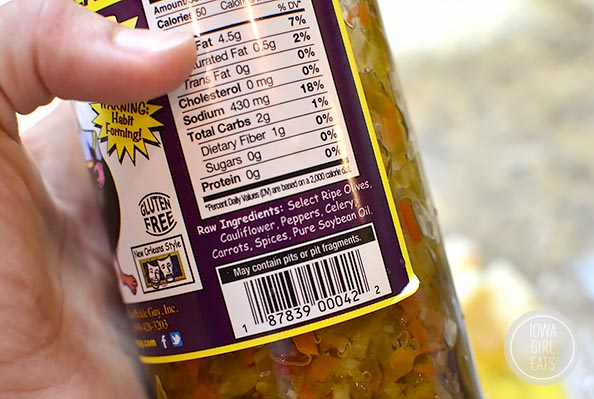 Drain 1/2 cup + 2 Tablespoons Muffalatta Mix in a fine mesh sieve, pressing down with the back of a spoon to help drain away the oil, then add to a big bowl with the salami and cheese. 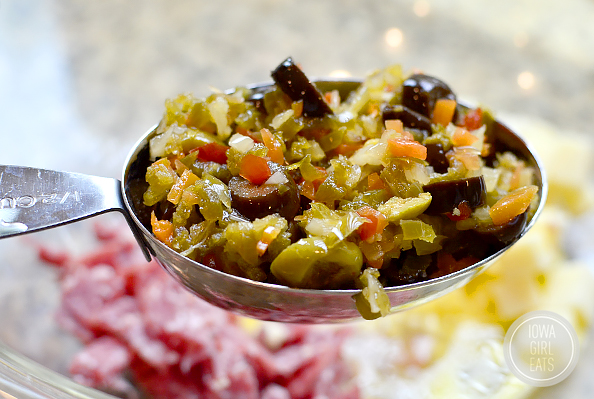 Finally, add 1 heaping cup Rice Chex that’s been processed in a food processor to make 1/2 cup crumbs, plus 2 cloves minced garlic, 1 whisked egg, salt (just a little,) and pepper then mix with a fork to combine. 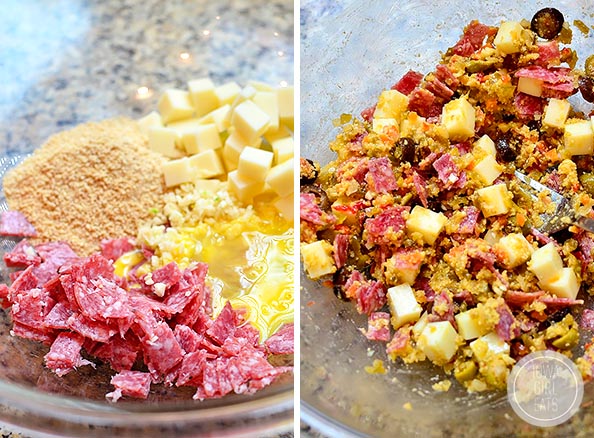 Crumble in 1lb lean ground beef then mix with your hands until just combined, and then form the mixture into 4 miniature-sized loaves and place on a foil-lined, nonstick-sprayed baking sheet. 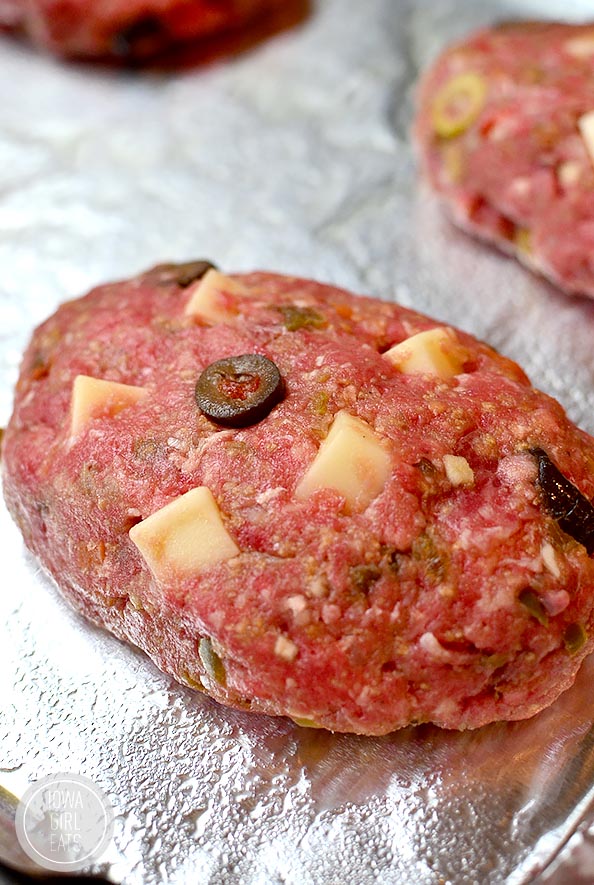 Pop the baking sheet into a 425 degree oven then bake for 18-22 minutes, or until cooked through. FYI – the melted cheese that’s oozed out of the meatloaves then gotten slightly crunchy on the baking sheet will blow your ever loving MIND! 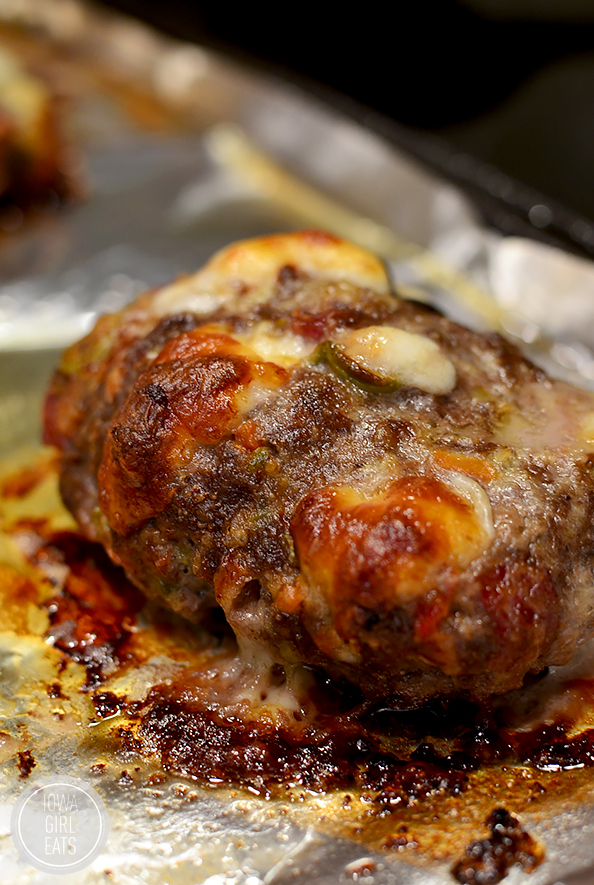 Plate the mini meatloaves, then top with more of the olive muffalatta mixture, if you please, and dig in! 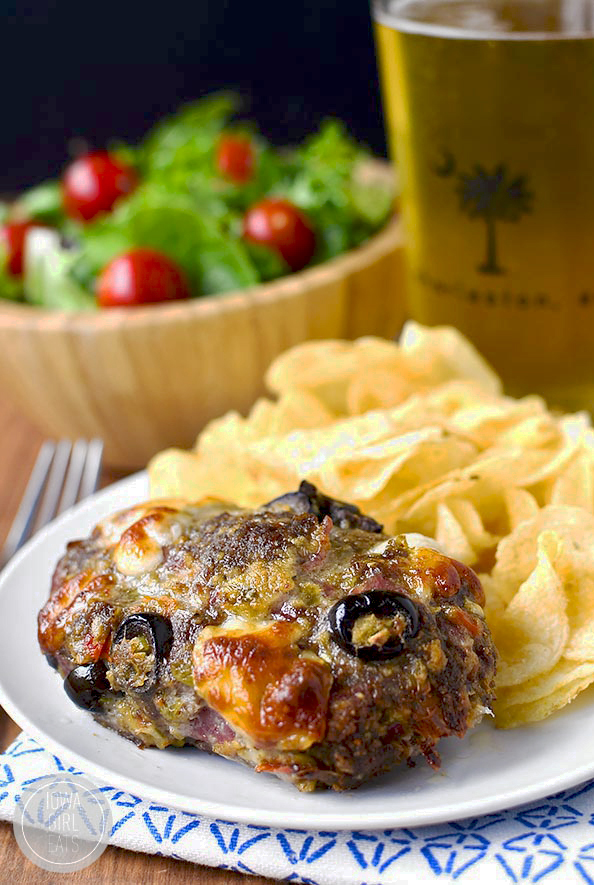 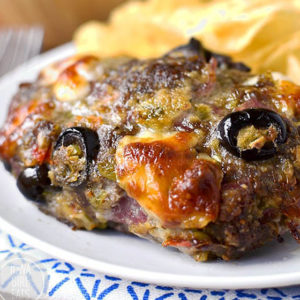 Cheesy, salty, savory – and let’s not forget, mini (squee!) – these personal-sized meatloaves are a true treat, and they re-heat beautifully if you’ve got leftovers. Pair with crunchy chips, and a fresh side salad, and dinner is served!