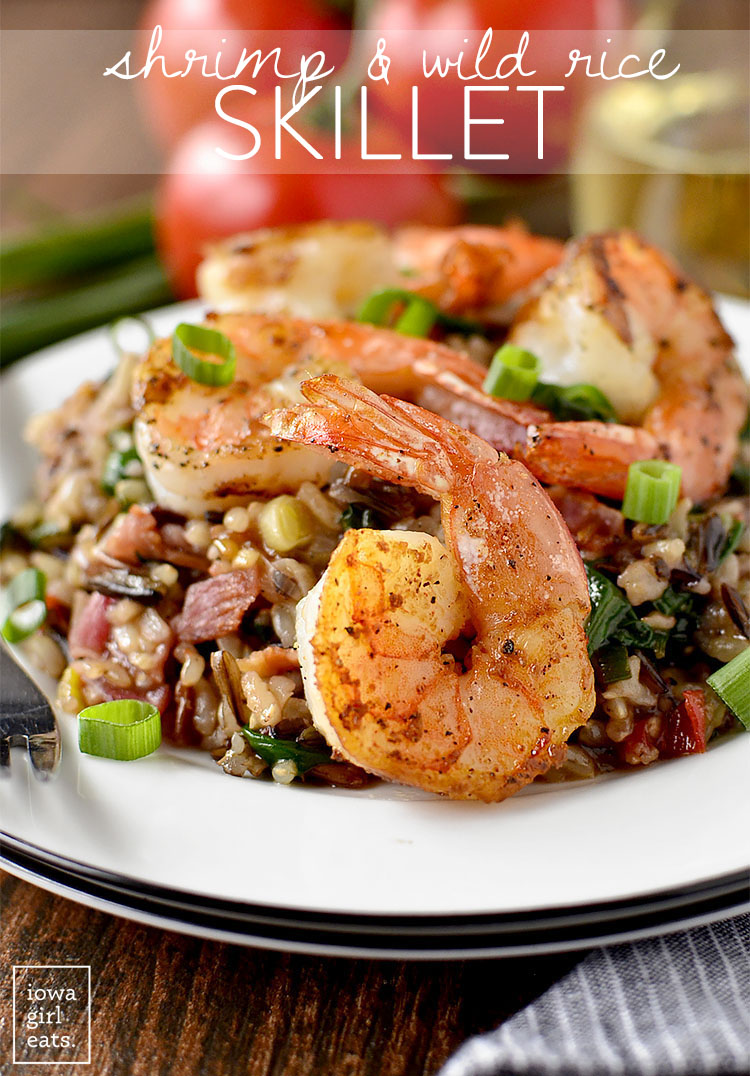 Hello, hello, welcome to the start of a new week! How was your weekend?

Unfortunately the little man caught a horrible cold late last week, so we stuck around the house nursing him back to health (and binge-watching Veep during nap time. Oh my gosh – Seinfeld meets Park and Rec – so. hilarious!) I was able to dash out for coffee with a friend on Saturday, followed by dinner with a few MOPS Mamas that night. We met at a Lebanese restaurant that I’ve been wanting to eat at for years, and I now want to exist on a diet made up solely of chicken shawarma and basmati rice. That is to say, we’ll be back, especially because I didn’t try the stuffed grape leaves. WHY DID I TURN DOWN THE STUFFED GRAPE LEAVES?!

Probably because I was still full from recipe testing Shrimp and Wild Rice Skillet earlier that afternoon – aka what you need make for dinner TONIGHT!

The inspiration for this recipe actually came from another restaurant Ben and I visited over the holidays – Club Car. They’ve been around for over two decades, but I hadn’t been since my sophomore year of high school when my girlfriends and I ate there prior to our school’s Valentine’s Day dance. None of us had dates so we gussied ourselves up, put on matching t-shirts from The Limited Too, then had our parents drop us off at the Club Car for dinner where an hour later we were supposed to be picked up by a limo then driven to the dance in all our girl power glory! Two hours later we started the long walk home with sagging curls and egos because our limo never showed up, then proceeded to eat our feelings by way of banana cream pies and buttered popcorn while watching the Spice Girls Movie on repeat.

Good times (and thank God for even better girlfriends!) 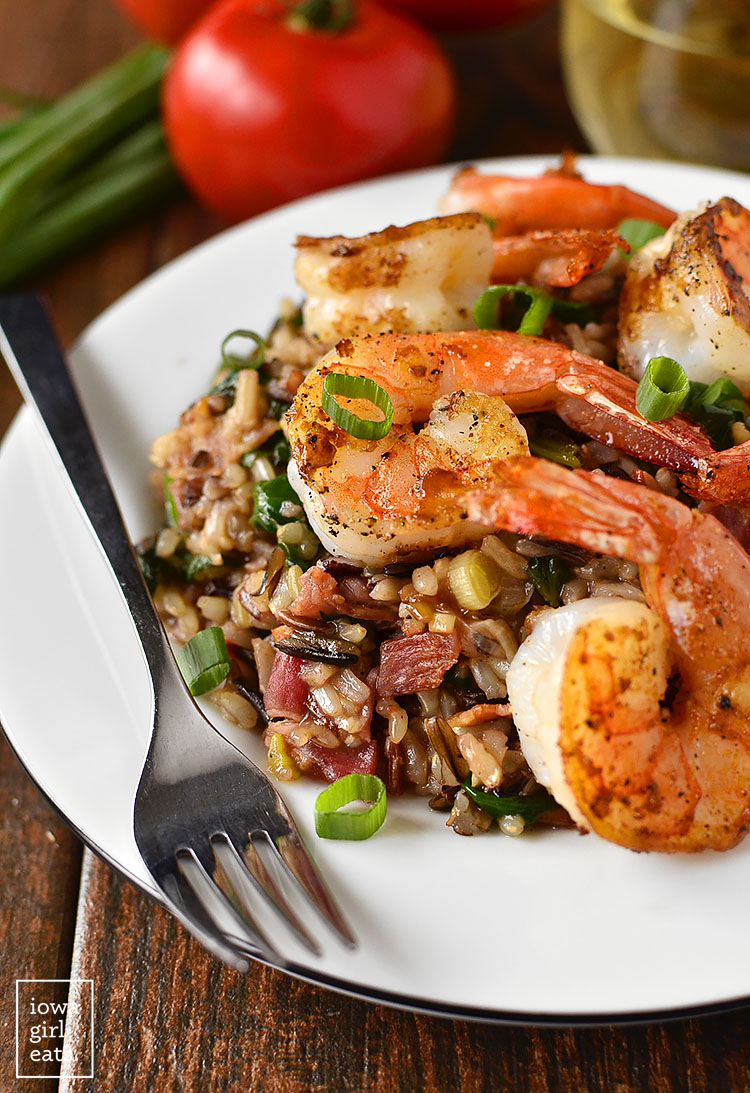 Anyway, Ben and I recently heard that Club Car is Celiac-friendly and were eager to add another safe restaurant to our short list, so we suggested the whole family go for dinner when his brothers and parents were in town over New Years. I’d peeked at the online menu before we left and knew they had gluten-free pizza, which is what I ordered and inhaled at record speed. 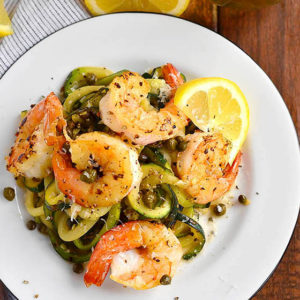 The meal was so good that we returned for lunch a week later and I ordered their Shrimp Charleston – sauteed shrimp served over a bed of rice tossed with green onions, bacon, tomatoes, and garlic butter. It was just Heavenly, and I was eager to recreate the flavors at home with a healthy boost!

I chose a brown rice blend as the base of my Shrimp and Wild Rice Skillet then added nutrient-rich vegetables including baby spinach and chopped tomatoes, big flavors from garlic and bacon, and staying power from sauteed shrimp. This dish is one of the most flavorful I’ve eaten in ages, and the active cooking time is like, less than 15 minutes. Super, super easy. I also love that this skillet dish is a complete meal in one – healthy whole grains and vegetables, filling protein…and of course, a little bit of bacon. :) 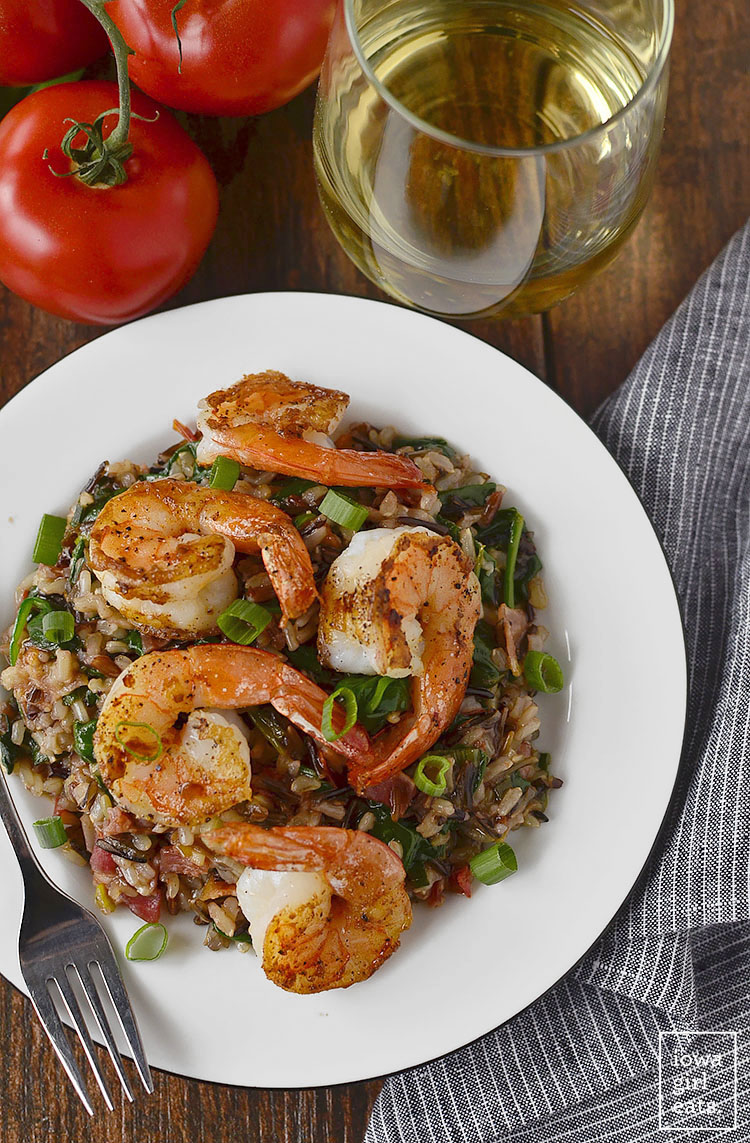 Start by cooking 1 cup wild rice blend in 1-3/4 cups chicken broth. You could do this one or even two days ahead of time, or get it going on the stove while you prep the rest of the ingredients, which is what I did. 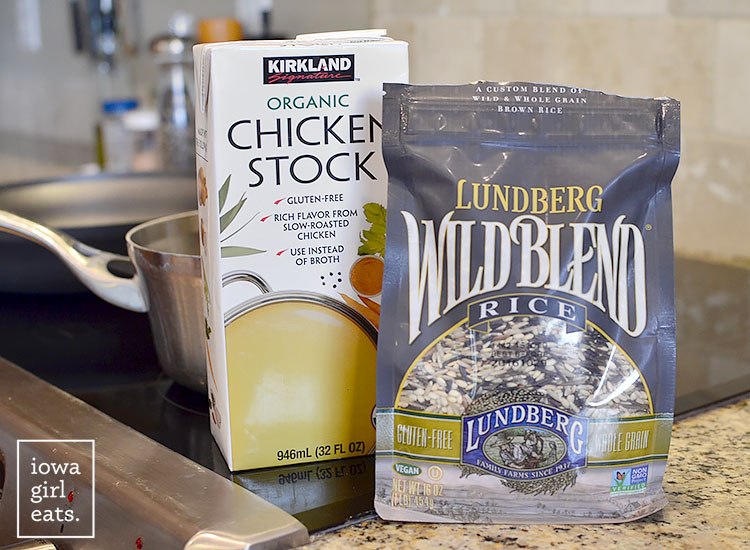 While the rice is cooking, add 1lb 16/20 count jumbo shrimp to 2 Tablespoons each brown sugar and salt stirred into 4 cups cold water then refrigerate for 20-30 minutes. This quick brining step will make the shrimp extra snappy and delicious once sauteed. I don’t always brine my shrimp, but it really makes a big difference in taste and texture when I do.

After the quick brine, drain then rinse the shrimp, and then pat them very dry with paper towels. 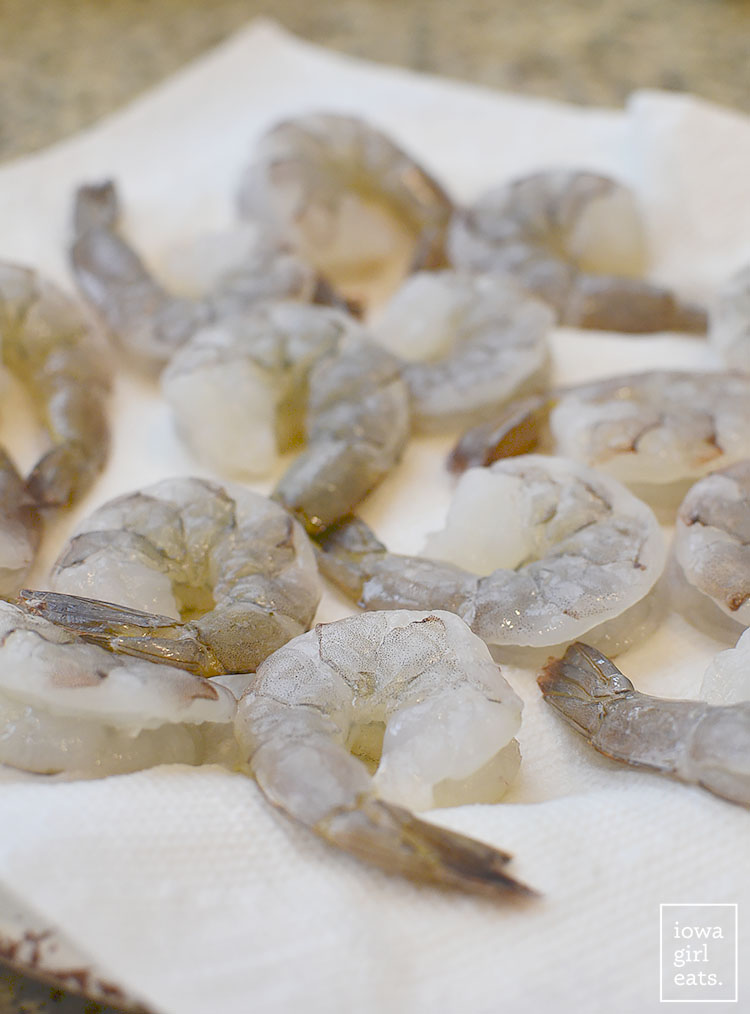 Ok – skillet time! Heat 1 Tablespoon extra virgin olive oil in a large skillet over medium-high heat, then add half the shrimp, season with seasoned salt and pepper, and then saute until the shrimp are cooked through, 1-2 minutes per side. Remove the shrimp to a plate then repeat with another Tablespoon oil and the remaining shrimp. 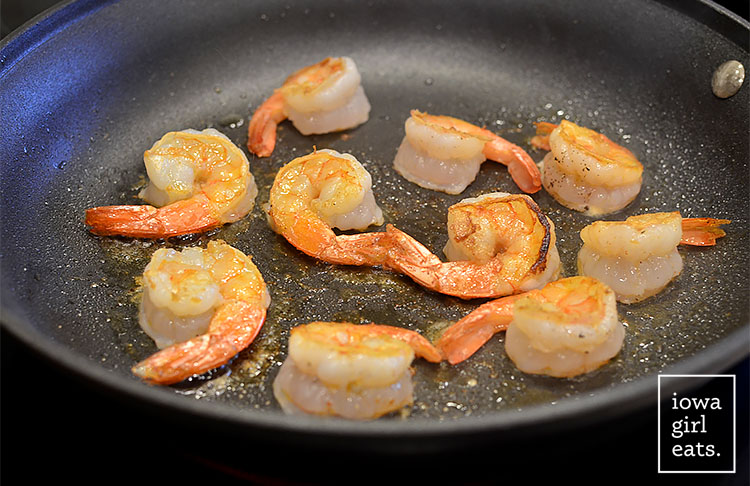 Turn the heat down to medium then melt 2 Tablespoons butter (you could use Earth Balance Vegan Butter, or ghee, which is what I used!) in the skillet. Add 2 chopped green onions then saute until tender, 1-2 minutes, and then add 2 minced garlic cloves and saute for 30 seconds. 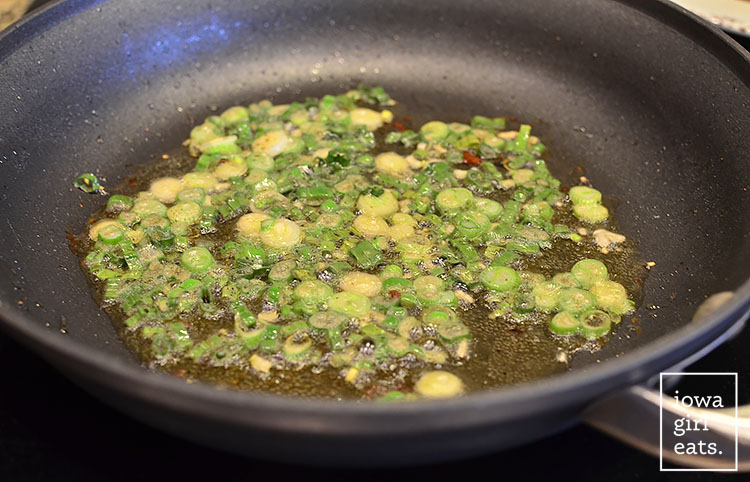 Next add 1 chopped vine-ripened tomato and 4 cups baby spinach that’s been roughly chopped. Season with more seasoned salt and pepper then saute for about a minute, just until the spinach is slightly wilted. 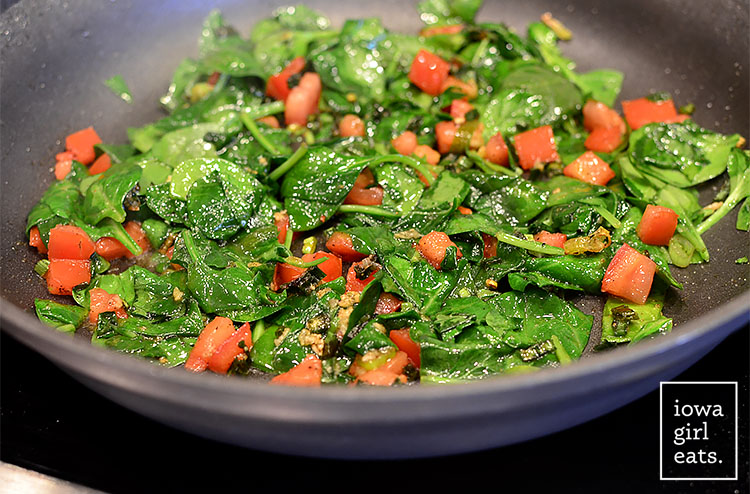 Finally add the cooked wild rice, 3 strips chopped bacon (which I cooked in the microwave to keep things easy!) and 1/4 cup chicken broth, and then simmer until the broth has been nearly absorbed by the rice. This makes the dish nice and creamy, without having to add cream! 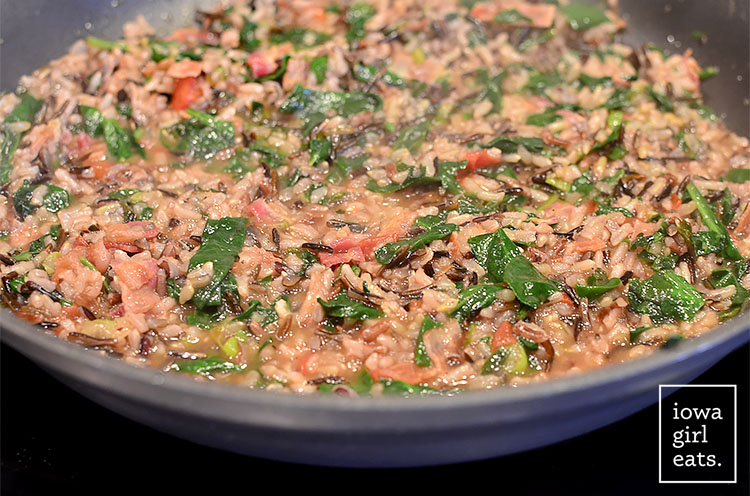 Last step is to drizzle in a little lemon juice which makes every flavor pop (trust me, don’t leave it out!) then scoop onto plates and top with the sauteed shrimp. Just like that, a delicious, restaurant-worthy dinner is served. Enjoy, enjoy! 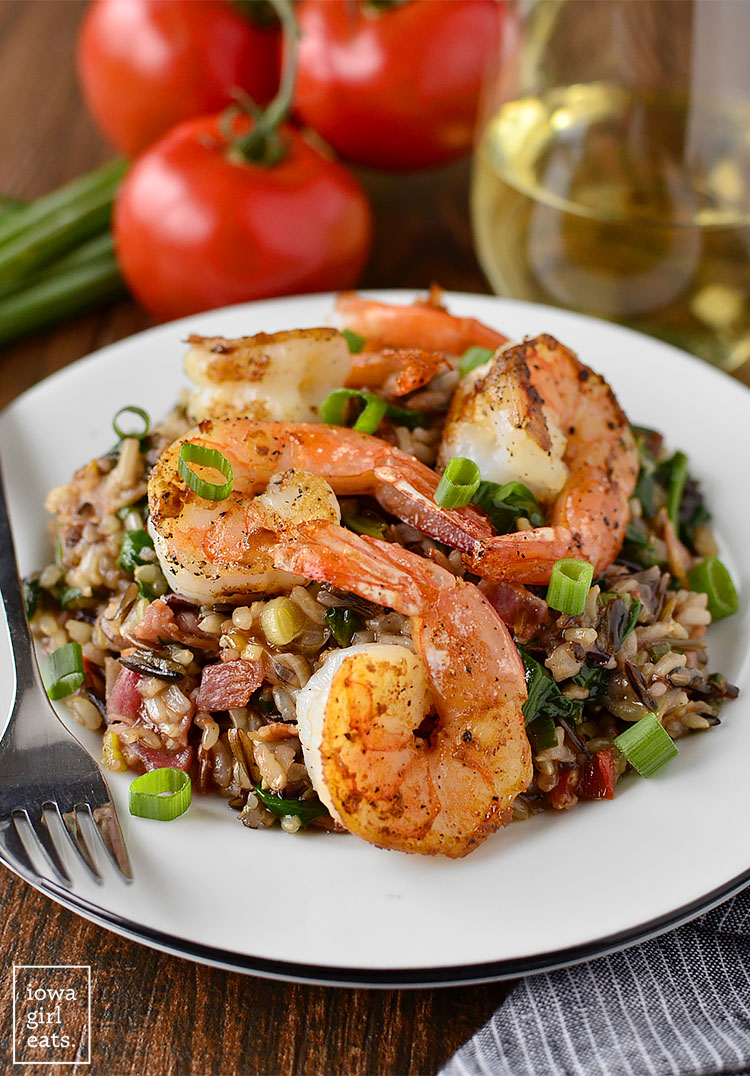 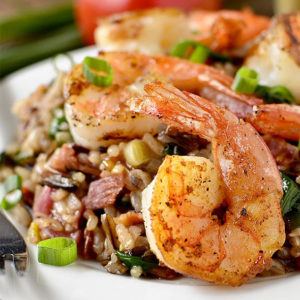