Skillet Chicken Parmesan is a comforting weeknight dinner recipe that's made in one skillet, and ready in 30 minutes. Well Ben’s sick. Fever, aches, pains – the whole nine. He says this kind of stuff is going around the office right now, which is probably where he picked it up. Good times in cube land!

Unfortunately my nurturing bedside manner is somewhat lacking, but I tried really hard this morning to cheerfully setup a tv tray next to Ben’s side of the bed then stock it with all the I’m sick essentials including a 44oz cup of water with a long straw, his book, crackers, the promise of a cold grapefruit La Croix in 1-2 hours, and his computer, which he requested be placed on the other side of the bed, lest he knock over his 44oz water and well, ruin everything.

Fortunately I love to nurse him back to health with cozy comfort foods made healthy, which makes up for my tough-love ‘tude, me thinks. Here’s hoping Skillet Chicken Parmesan does the trick! As quick as it is mmm-mmm good, Skillet Chicken Parmesan slashes the time, effort, and calories from traditional breaded and fried Chicken Parmesan, and turns it into a comforting, healthful weeknight supper that’s made in 1 skillet, and ready in 30 minutes. I am obsessed. And so is the sick man.

Ok, ok, let’s address the elephant in the room: THE CHEESE. Since we’re eliminating the breading and frying of chicken cutlets in traditional Chicken Parmesan, I decided to keep a couple thin slices of ooey-gooey fresh mozzarella cheese to broil on top of the chicken breasts after they cook in simmering marinara sauce. This stuff’s got to fix the flu, afterall! ;) 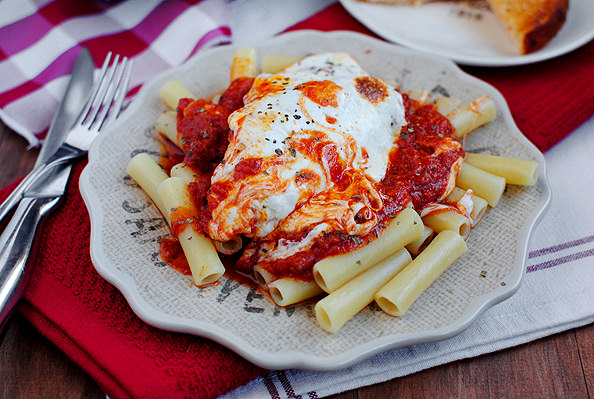 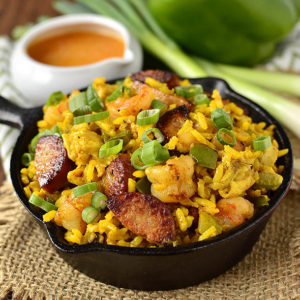 Start the Skillet Chicken Parmesan by cutting 2 large chicken breasts in half, then brushing both sides with extra virgin olive oil and seasoning with salt and pepper. I’ve said it once, and I’ll say it again, brushing chicken with olive oil before sauteing makes for the tastiest chicken on the block! 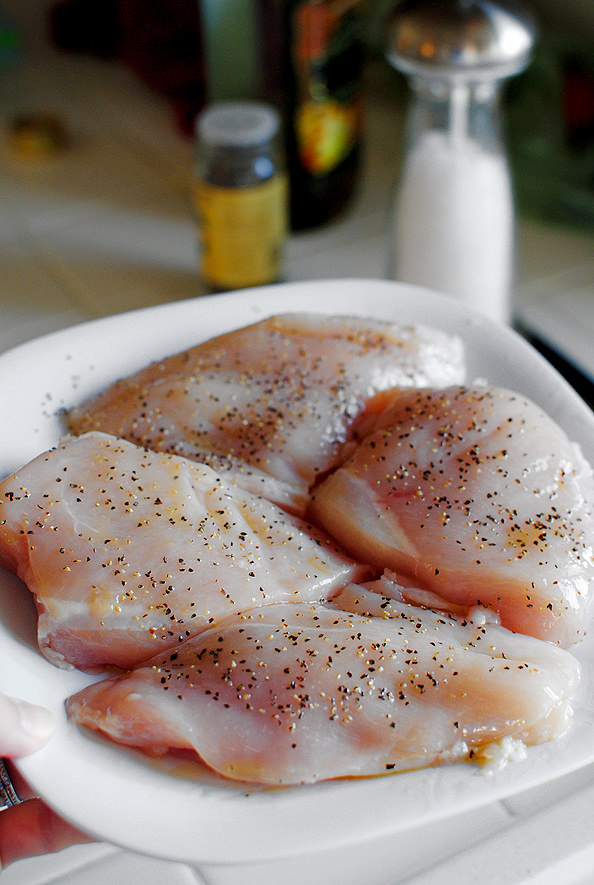 Saute the chicken in a large, non-stick sprayed skillet over medium-high heat for 2-3 minutes a side, then remove to a plate, turn the heat down to medium, and remove the skillet from the burner. 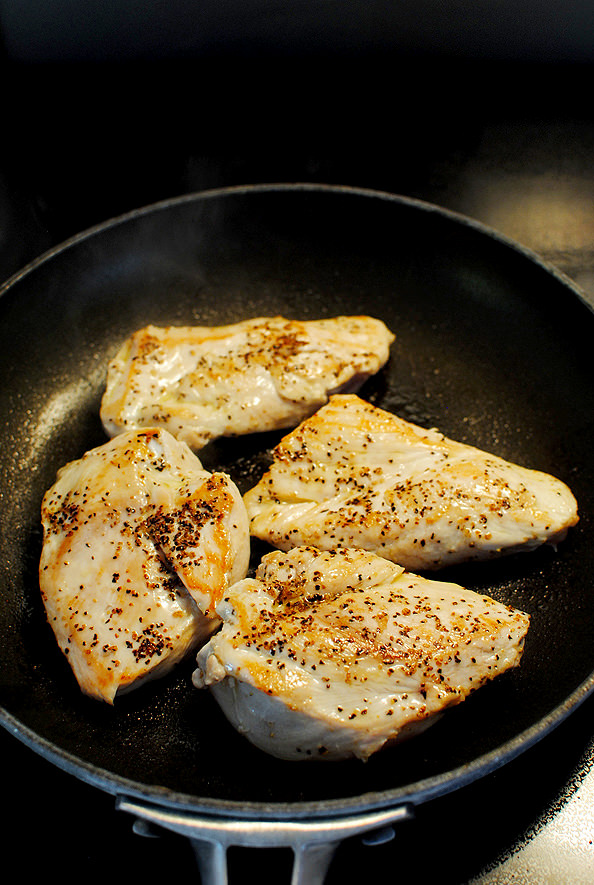 You don’t need to cook the chicken all the way through, btw, just get ’em nice and golden brown on the outside. 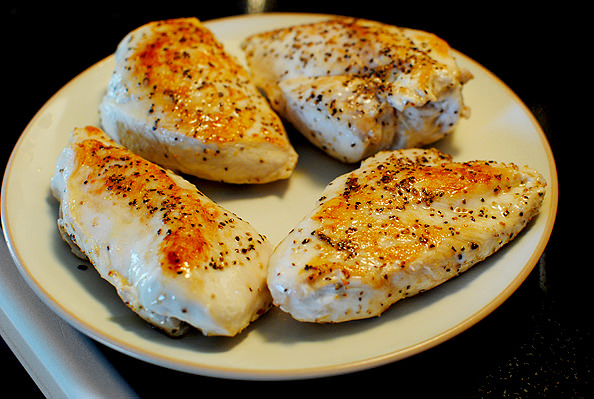 Next, break out the stahhh of the skillet – marinara sauce. Slightly spicy, locally-made Gino’s is my go-to, but I also really like Giada De Laurentiis’ line of sauces, which you can get at Target. 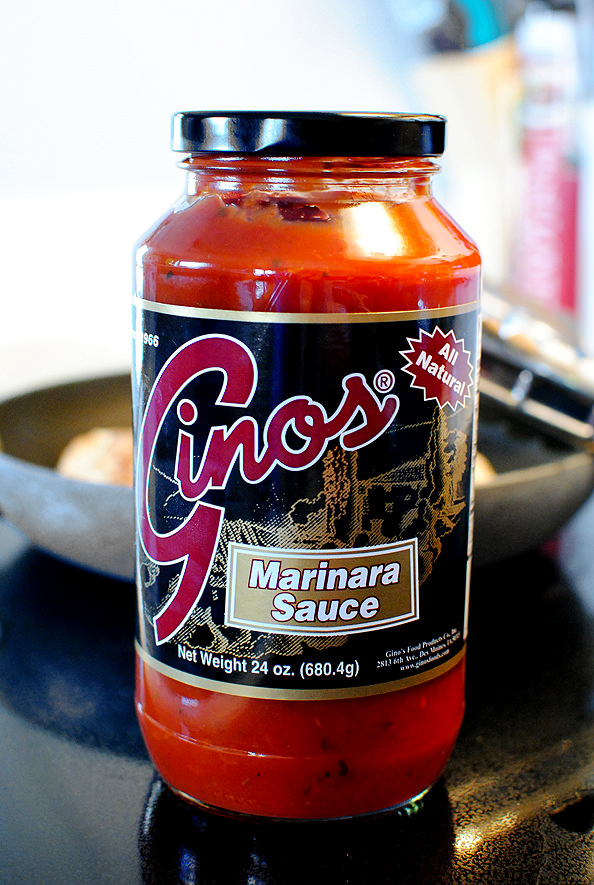 Once the skillet has cooled off the heat for 1 minute, carefully pour in 2 cups marinara sauce. Marinara sauce will splatter and spit when poured into a super hot skillet, which is why it’s important to let it cool a bit before adding the sauce. 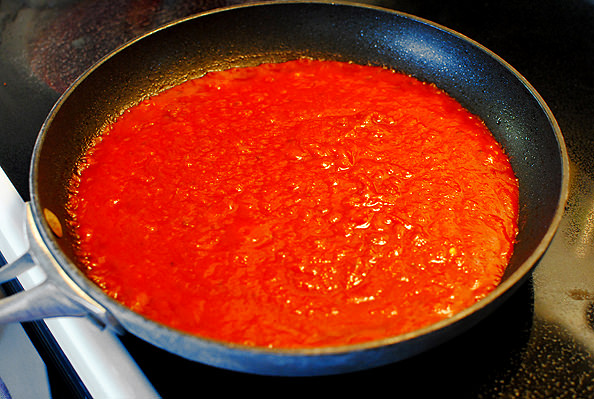 Stir the sauce together, then place the skillet back on the burner over medium heat.

Nestle the chicken breast halves in the sauce, then place a lid on top and cook for 10 minutes, or until the chicken is no longer pink in the center.

Turn off the heat and remove the skillet from the burner, then place 1oz sliced mozzarella cheese on top of each chicken breast, and broil until golden brown. 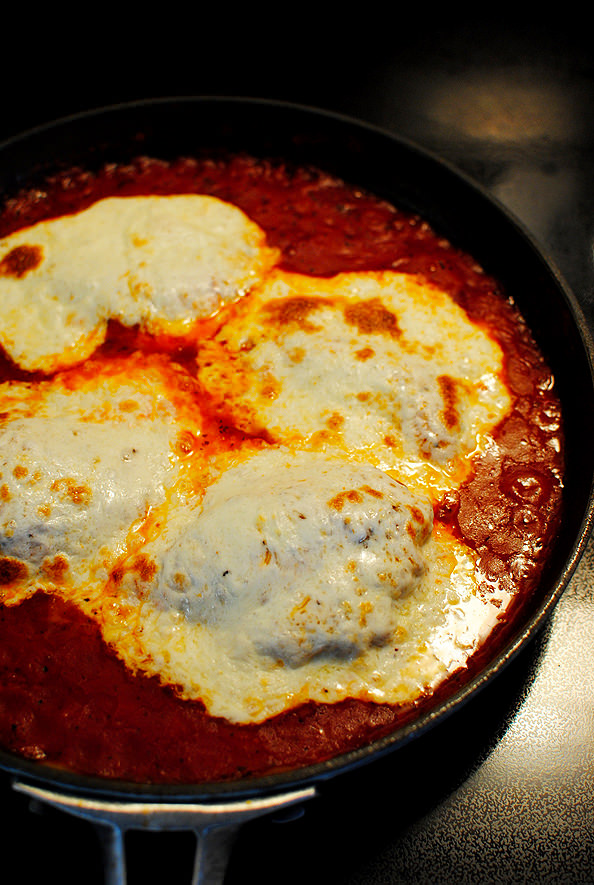 Nestle each mozzarella-covered chicken breast over a bed of cooked gluten-free ziti (or whatever you’ve got on hand) then spoon over a scoop of the cheesy, seasoned marinara sauce. Dinner is served! 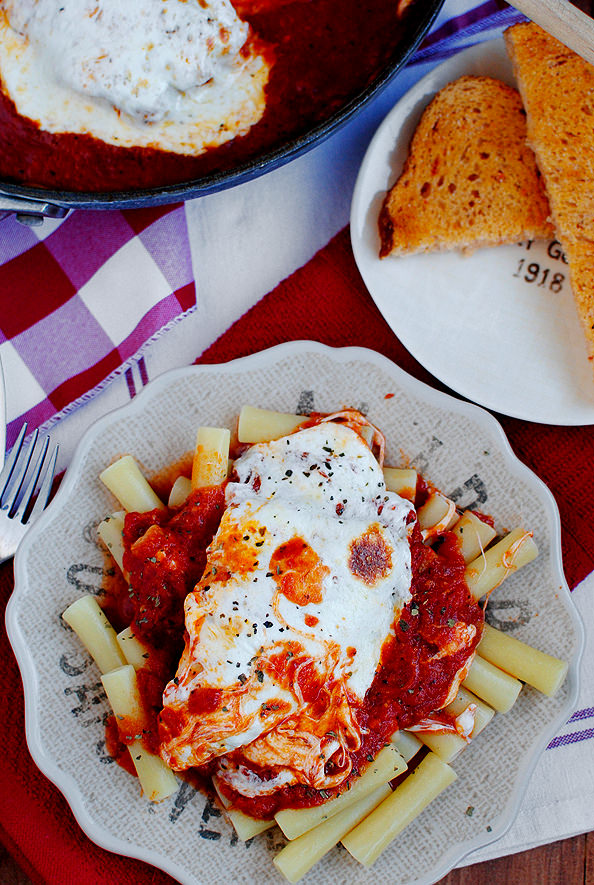 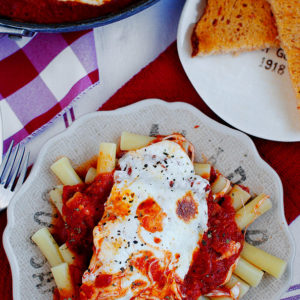 Skillet Chicken Parmesan is a comforting weeknight supper made in 1 skillet, and ready in 30 minutes. 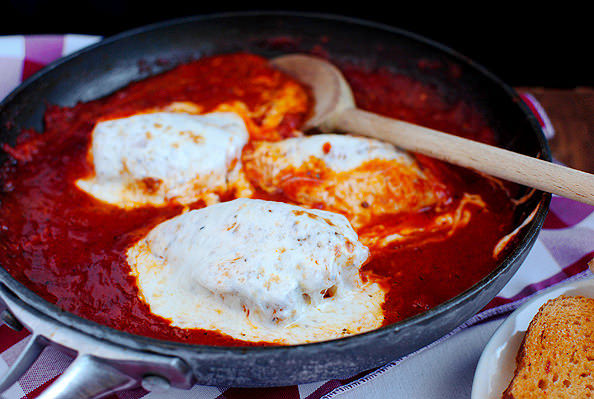 You will not believe how tender and juicy the chicken stays from cooking in the marinara sauce, which totally eliminates the need for cooking in extra fat, by the way! 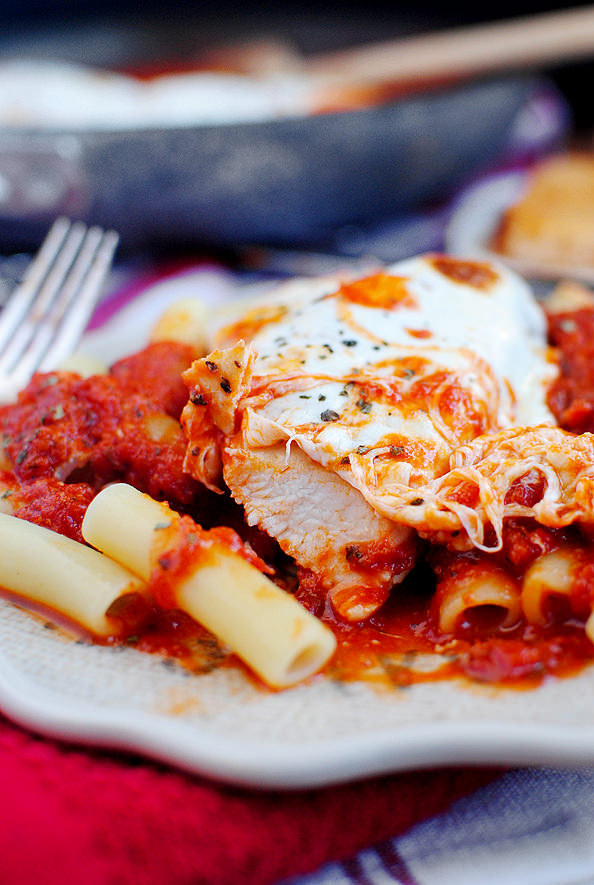 Serve the saucy, cheesy chicken over a bed of your favorite cooked pasta. This is a total pantry supper, so just use whatever you’ve got on hand. 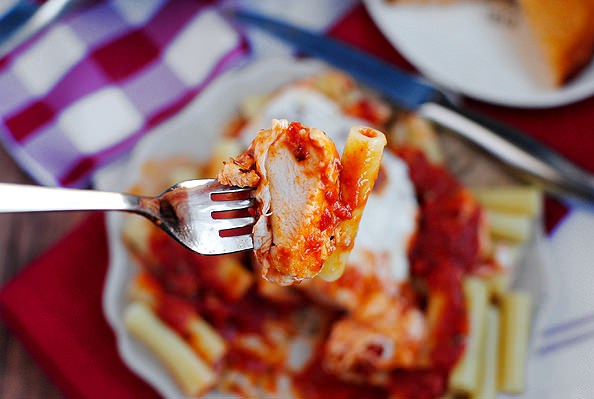 I served our Skillet Chicken Parmesan with a nice side salad of baby spinach, carrots, and celery, and a few slices of Garlic Bread that I broiled alongside the skillet in the oven. It’s just Tomato Basil bread misted with olive oil then sprinkled with garlic salt and broiled until golden brown. One of Ben’s faves! :) 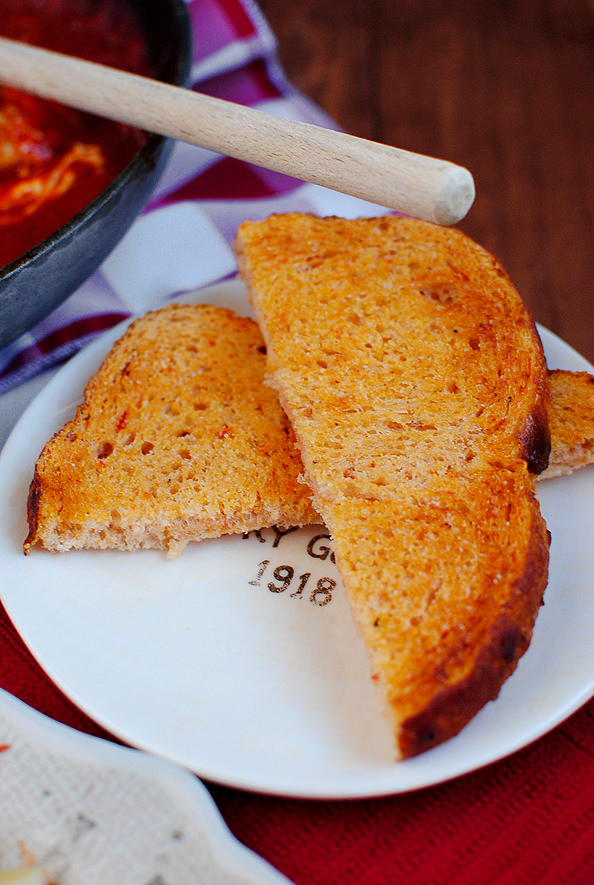 Here’s hoping he pulls through! ;)