Skinny Creamy Italian Chicken Skillet is a quick and satisfying dinner recipe. Plus it's made with ZERO cream! 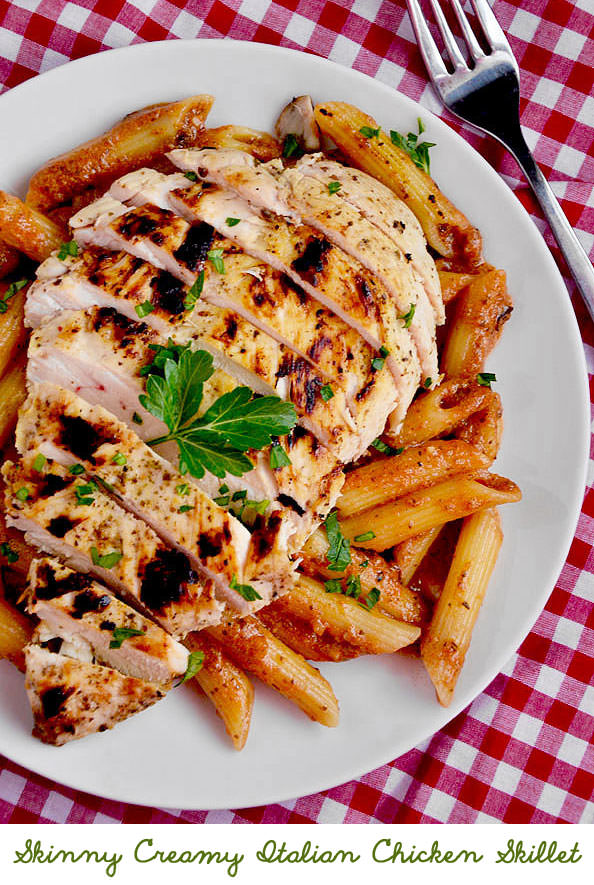 So my parents are in this 3-part, mini Advent-themed play at their church during the next three weeks of Wednesday night Advent services. This cracks me up for two reasons:

1. Can YOU keep a straight face picturing your parents standing up in front of their congregation and, uh, ACTING?!

2. My Mom can’t memorize lines to save her life. Poor gal!

See, my dad was cast in the play first, but they still needed a women to play his wife so he volunteered, well, his wife, then asked her if it was ok. You know how it goes.

After being a good sport about it for the first couple of practices, the thought of actually getting up there and reciting her lines live from memory proved to be more than the poor woman could handle, so she quasi-begged to be replaced at their final dress rehearsal last night, on the eve of their first performance – TONIGHT!

I’m sure she’ll be fantastic though. I told her to tape her lines to the back of a prop, and make sure she gets a Britney Spears over-the-ear mic instead of a hand held one. Just another distraction, right?

By the way, I can laugh about all this because it’s not me. If the roles were reversed I’d be either a.) barfing, or b.) sweating profusely on the alter as they called action, as I can’t memorize lines for ‘ish either, AND I hate standing up in front of crowds. That said, I can’t wait to see them in action. BaHA!

Anyways, all the church talk got me reminiscing about the countless hours my family used to spend there on Wednesday nights growing up. From youth choir, bell choir, and puppet club (yeah…) practices, to youth group meetings, and gosh, who knows what else, I feel like we were there all afternoon and evening on Wednesdays, especially during the holidays!

If we weren’t eating at the church’s weekly soup supper potluck, my Mom would usually whip up a quick and easy meal before heading out of the house, like this Skinny Creamy Italian Chicken Skillet for a healthy dinner that would keep us going all night long. 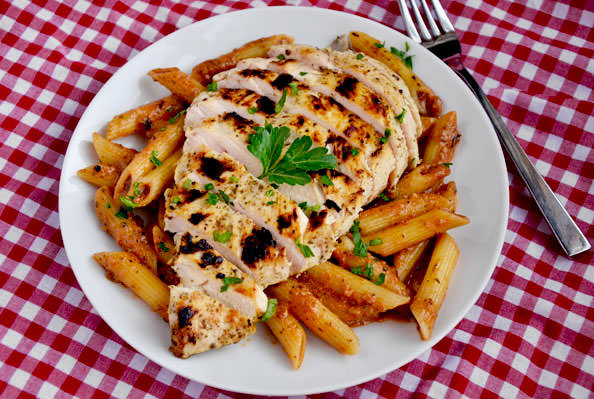 YOU GUYS. This dinner is SUCH a winner!! Marinated chicken is sauteed then placed on top of chewy penne pasta coated in a luscious, tomato-pesto-cream sauce that’s made with ZERO CREAM! I’ll show you my trick, it’s freaking amazing. 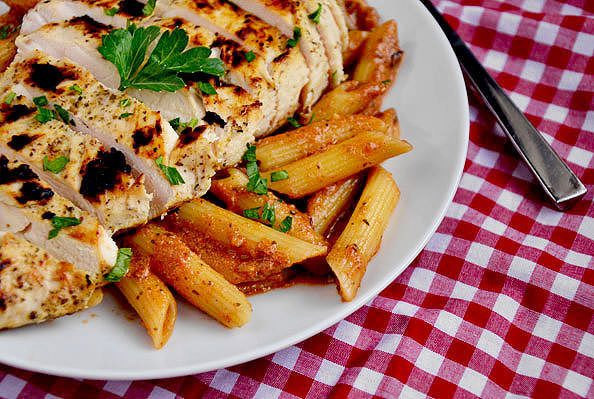 Made in one skillet, and extremely filling, this is one mouthwatering dinner that will keep hungry bellies full and satisfied for hours. 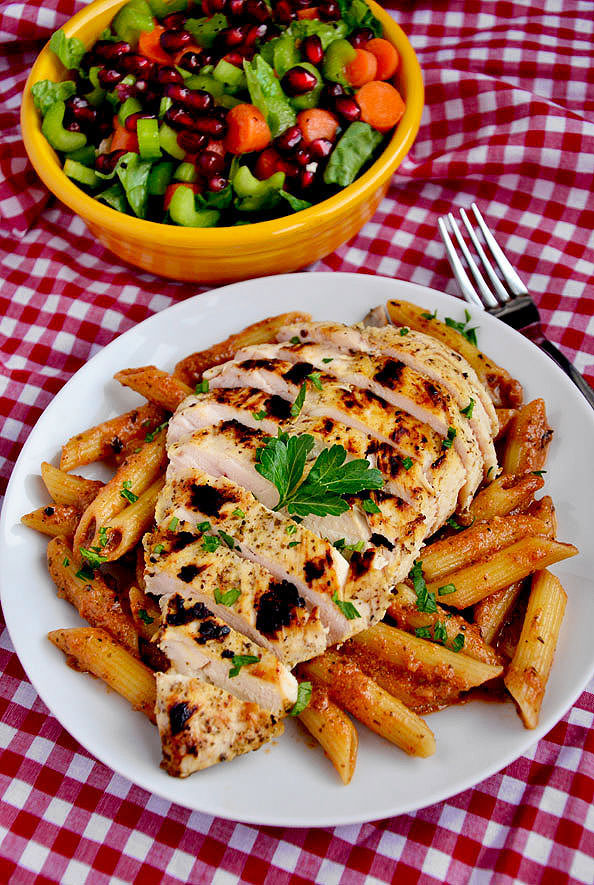 Start by marinating chicken breasts in a lip-smacking, flavor-packed marinade. (BTW – I made 1/4 of the chicken for the photos below!) 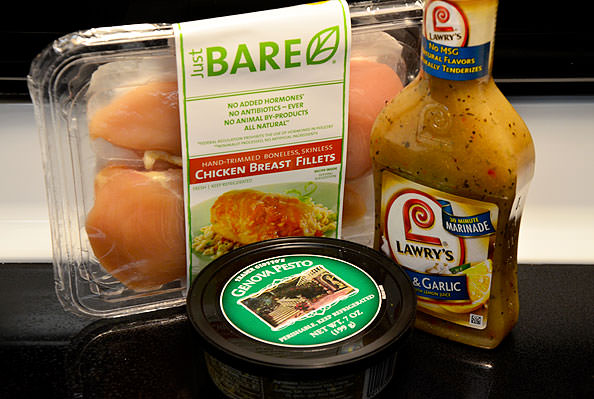 In a large, Ziplock bag place 2 Tablespoons pre-made pesto. You can use my homemade recipe, or buy it pre-made from the store. This pre-made pesto from Trader Joe’s is fantastic. I’ve used it dozens of times for different recipes and it always tastes really fresh.

Next add 1/2 bottle of Lawry’s Herb & Garlic Marinade to the bag. This is a 30 minute marinade which means it gives the chicken TONS of flavor, in just a little bit of time. Finally, add the chicken, squish to coat in the mixture, then marinate in the refrigerator for 30 minutes, or up to 8 hours. Marinade = done! 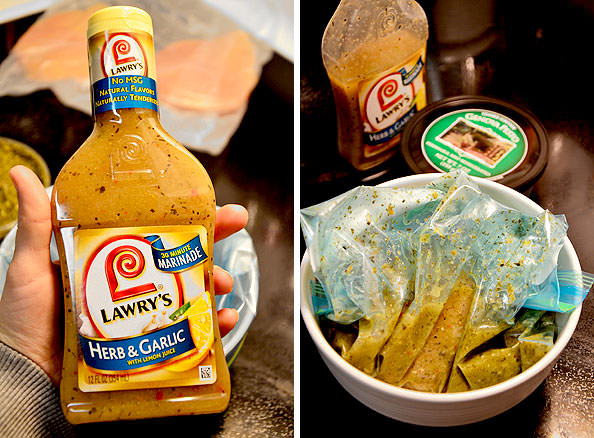 When you’re ready to eat, spray a large skillet very well with non-stick spray then cook the chicken breasts over medium heat for 5-6 minutes a side, or until they’re no longer pink in the center. Remove the chicken to a plate, cover loosely with foil, then set ’em aside for a bit. 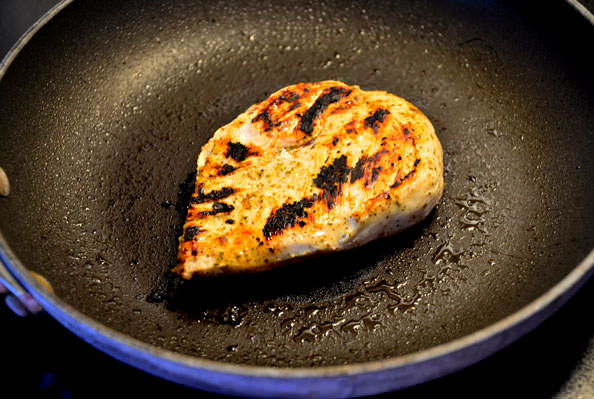 At the same time, drop 8oz penne pasta into salted, boiling water. Once it’s al dente, drain then set it aside too. 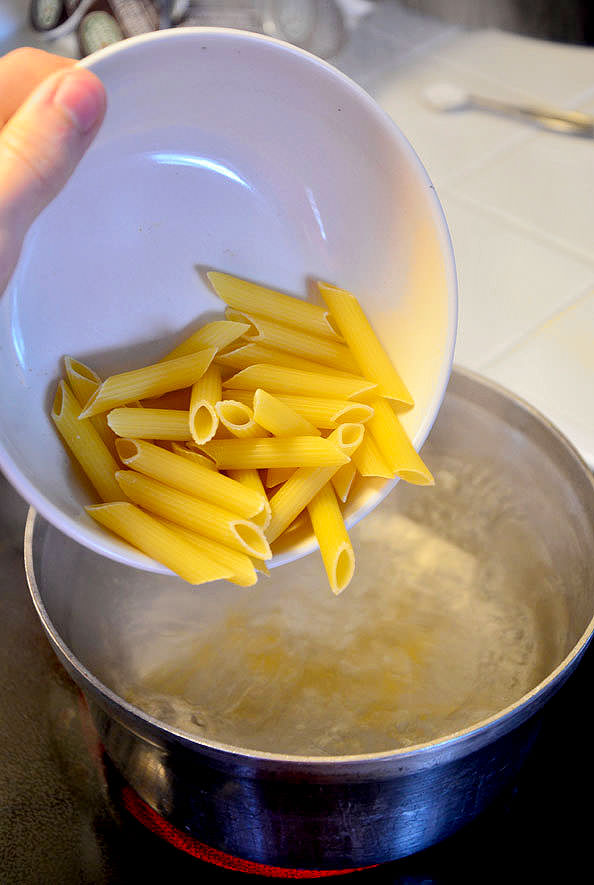 K! Now onto the creamy, dreamy sauce that’s made in the same skillet as the chicken.

Carefully wipe out the skillet with a spatula, then saute 1/4 small minced onion in 2 teaspoons extra virgin olive oil until tender. Then add 2 minced garlic cloves and saute for 30 seconds. Next, add 1/2 cup chicken broth and let it cook until reduced by half. Only takes a minute or two! 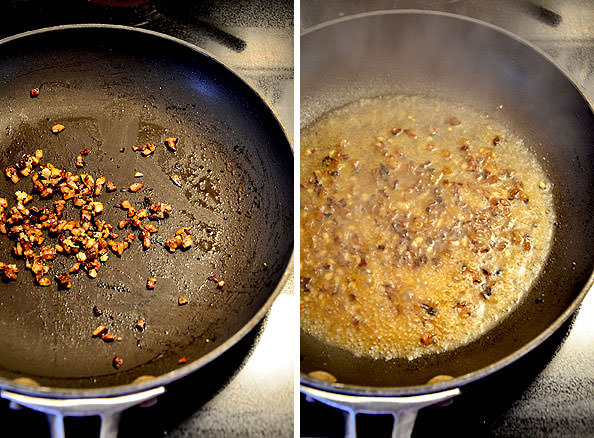 Evaporated milk gives the same creamy mouth-feel as cream does to recipes, but adds a fraction of the fat and calories. I used it in a Creamy Roasted Brussels Sprouts post I did for Delish Dish last week, and am seriously never looking back! 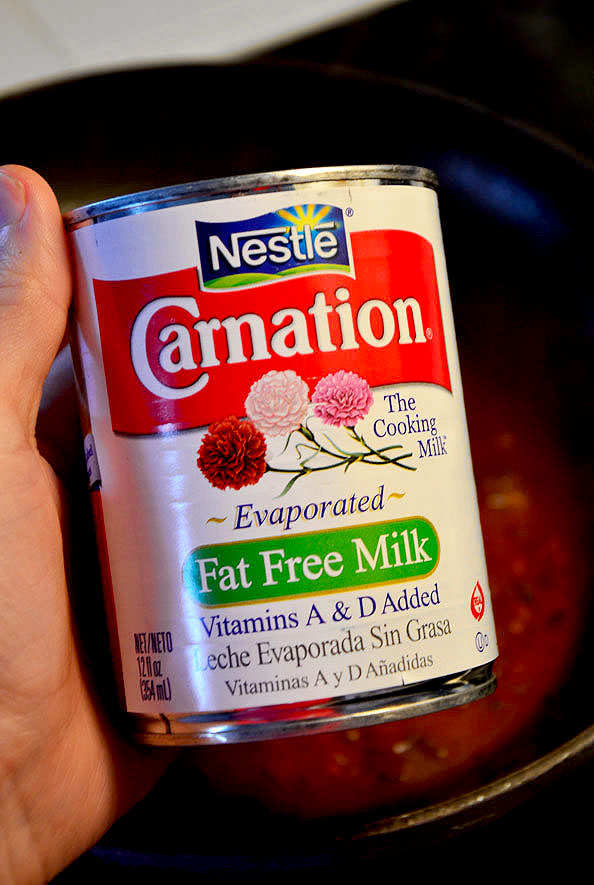 The last step to take the creamy sauce up a notch is to whisk in 1 teaspoon flour, and 4 teaspoons pesto.

Let the sauce bubble and thicken for a few minutes, then stir in the cooked pasta. 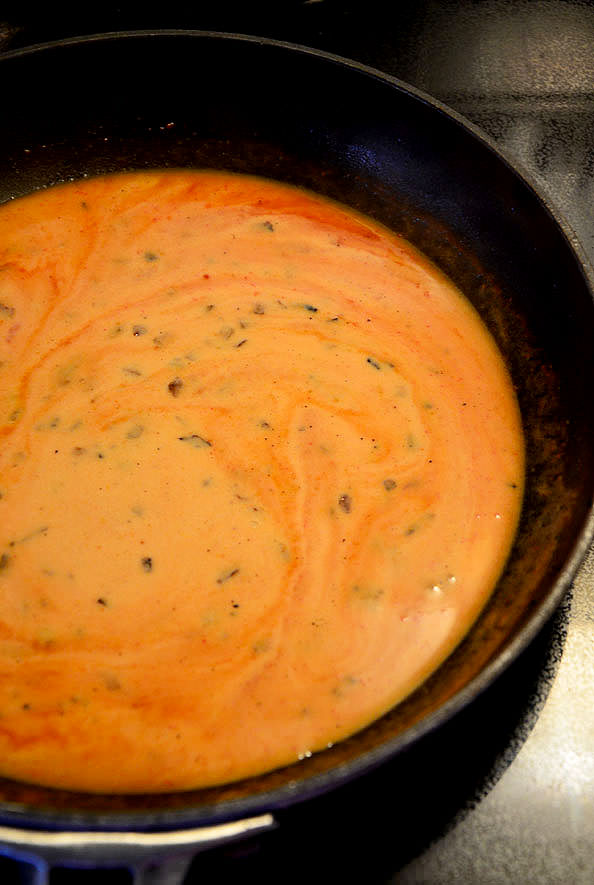 Finally, plate and top with the cooked chicken! 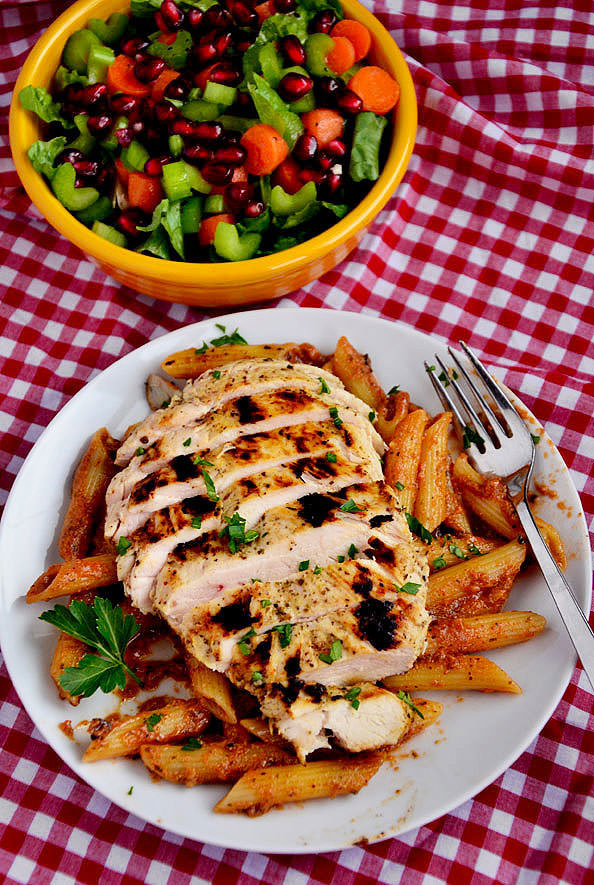 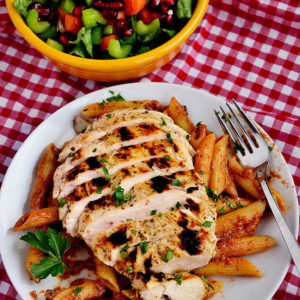 Skinny Creamy Italian Chicken Skillet is quick, creamy, and satisfying - and made with ZERO cream! 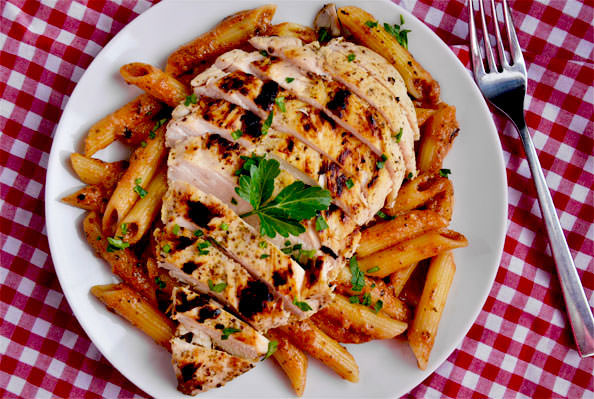 This sauce is a home-run, outta the ball park, winner. You would never know it was made with evaporated milk and not heavy cream. It’s so decadent and delicious! 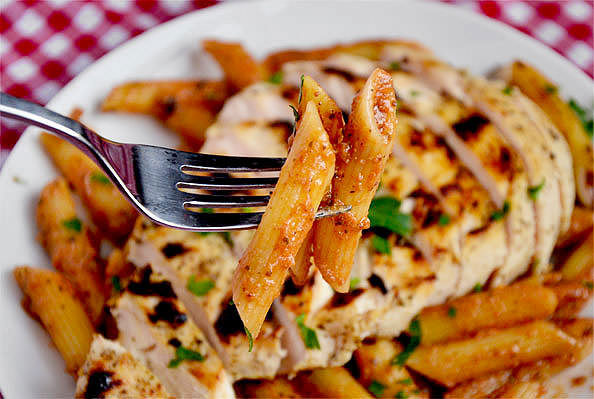 The chicken is flavorful from inside and out, and super tender too. A combo of good quality chicken, and a GREAT marinade! 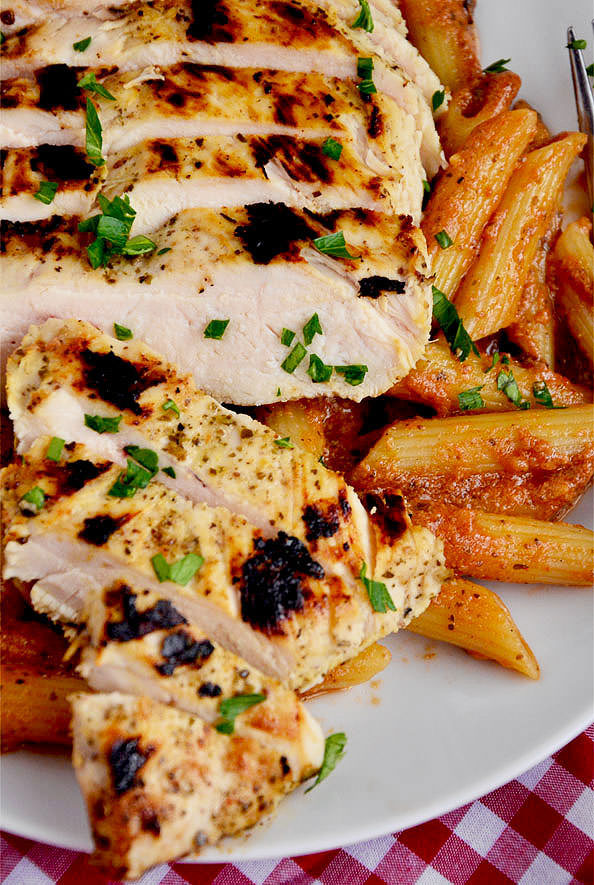 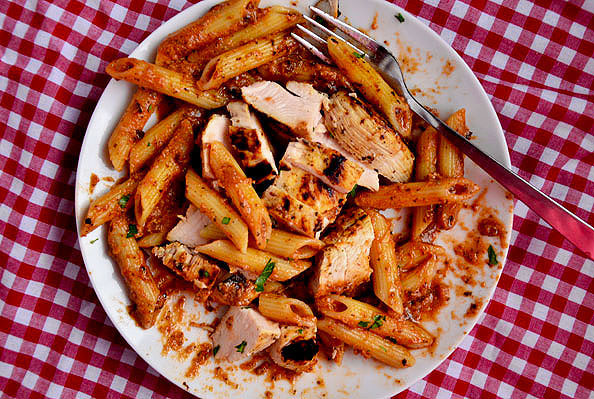