Sparkling Maple Bourbon Ciders are all-fall, and so delicious! Just 3 ingredients needed for this extra-giggly cocktail. 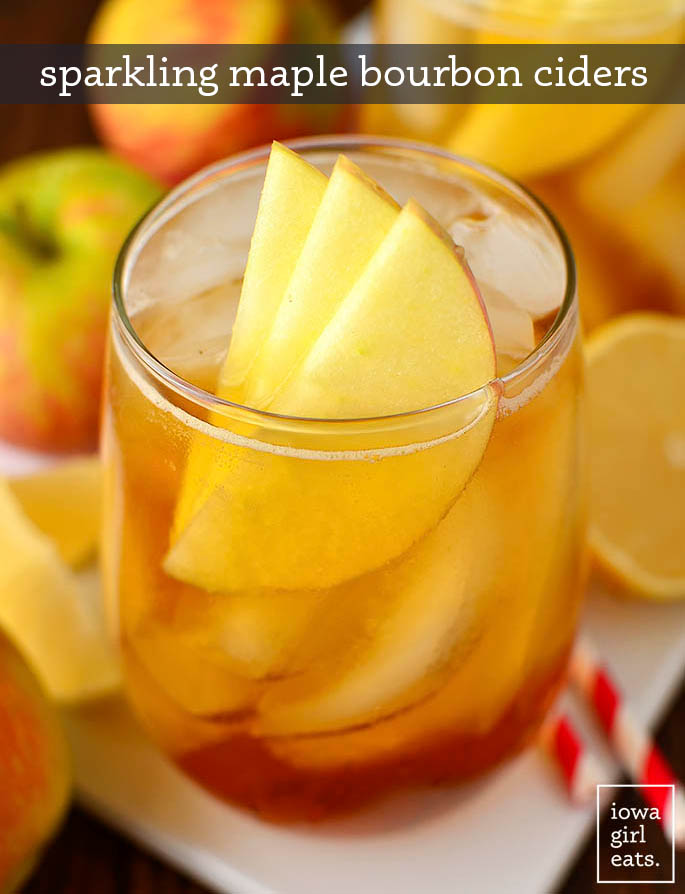 My Dad’s a former banker turned grade-school science teacher. The main reason he left the corporate world in his 40s was because his job was incredibly unfulfilling, but also…summers off, man! Truly I’ve never met someone who enjoys their job more but he definitely takes advantage of those lazy summer days.

Cutting the lawn, lounging in the hammock, reading books, going on bike rides, making Pomodoro Sauce and…inventing cocktails. Because when you’ve got nothing in particular to do, and nowhere in particular to be, the liquor cabinet starts looking more like a fun challenge then a weekend-only indulgence. (And if you know my Dad, Rolling Rock obviously doesn’t belong in the liquor cabinet and thus is not a weekend-only indulgence!)

Anyway, every summer he concocts a signature cocktail to sip in the aforementioned hammock. A few years ago there was always a pitcher of “Smurfs”, aka blue raspberry lemonade vodkas, at the ready. This past summer was all about Whiskey Sours, while a different summer revolved around “The Keith Shandy”. Typically a shandy is beer mixed with soda, ginger beer, or juice, and while most would spike a beer with lemonade and call it a day, my Dad went ahead and added vodka too. What can I say, he’s quite the mixologist. 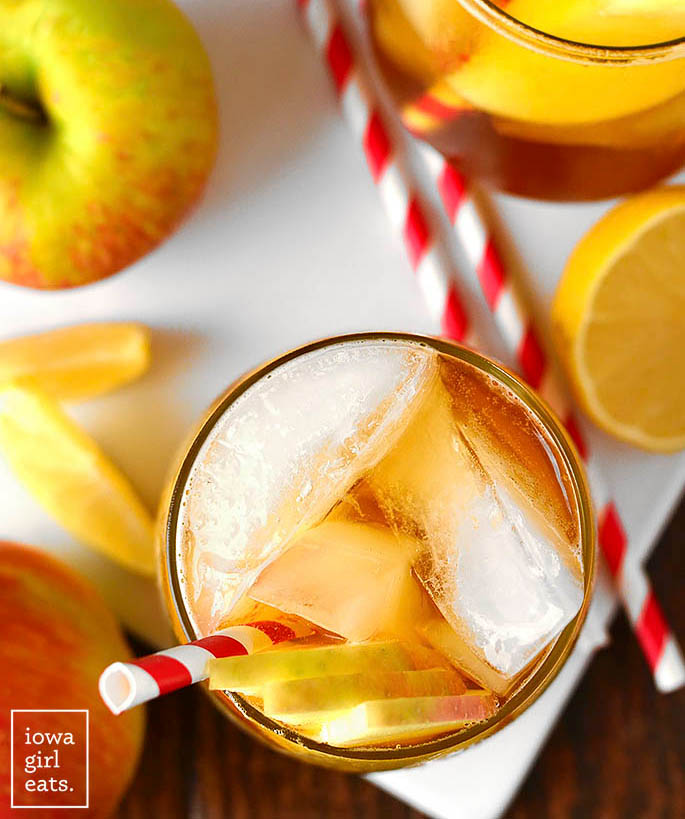 The idea to make a bourbon/cider-type drink has been with me for almost a year now. Literally I thought of it at the tail end of last fall but instead of squeaking out a post late in the season, I popped it into my calendar for the following year. 2017. Today!

I guess I wasn’t as desperate (read: sleep deprived) back then because the cocktail was originally supposed to be just bourbon and apple cider. Then my youngest decided to stop sleeping and now I do things like call my eye doctor to fill the topical medication my dermatologist prescribed and, well, wreak havoc on everyone’s life.

That is to say, this drink is STRONG. The recipe makes enough for 2, but you’ll want to split it with a partner, partner! If you’re only feeling regular giggly, you can of course use non-alcoholic apple cider in place of the hard cider, too.

Now, let’s talk about the maple syrup in this drink. It plays so well with the caramel-vanilla undertones of bourbon and does NOT make for a sweet drink. I detest sweet cocktails and would never do that to you. There’s only 1/2 teaspoon maple syrup per drink and it simply compliments the bourbon and hard cider flavors. A wee squeeze of lemon juice helps brighten up the drink if you feel it needs it.

I also feel like it has to be said that if you don’t like bourbon, you probably won’t like this drink. If you do like bourbon, and hard cider, and all things deliciously delicious, then you’ll probably love this fun sparkling cocktail! 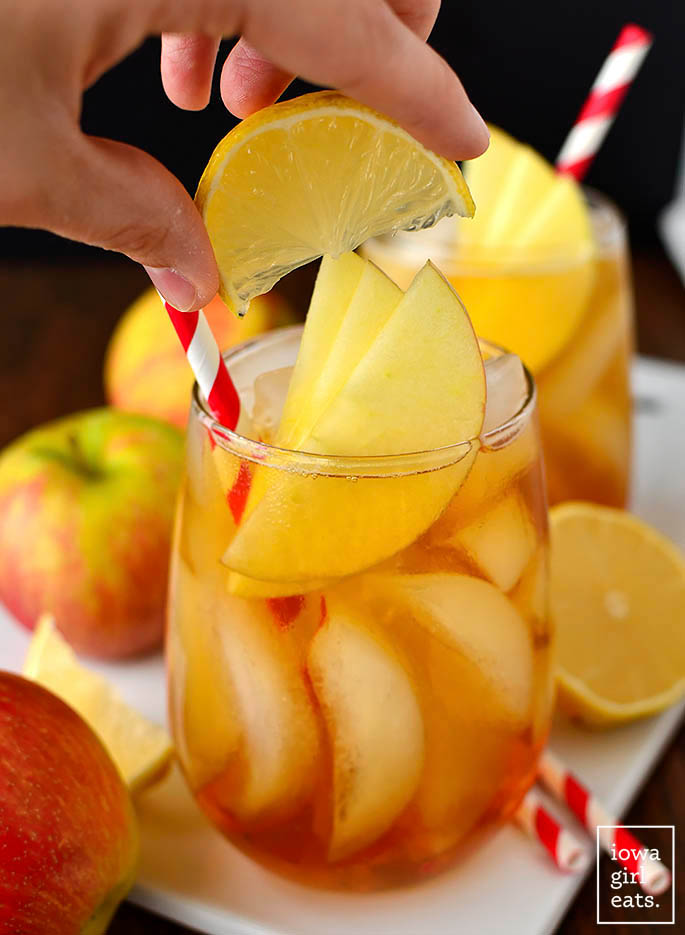 There is nothing complicated about this recipe. Add 1 shot bourbon (1-1/2oz) and 1/2 teaspoon pure maple syrup to each of 2, 16oz glasses, then stir to combine. Maker’s Mark is my bourbon of choice – remember, you can get those little airplane-sized bottles if you don’t want to commit to purchasing a big bottle – and be sure to use pure maple syrup versus pancake syrup. Spring for the good stuff and I promise you’ll never go back! 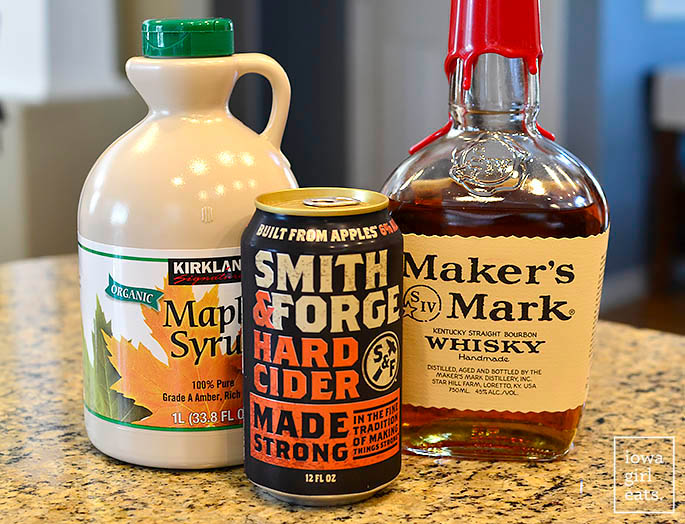 Fill the glasses to the top with ice then divide 1 can hard cider between the two of ’em. Smith & Forge is a dry, not too sweet cider that’s available pretty much everywhere. My other favorites include Bold Rock Cider, made in Virginia and North Carolina’s Blue Ridge Mountains, and Sociable Cider out of Minneapolis.

Give the drinks a stir then bottoms up, my friend! Cheers – and enjoy! 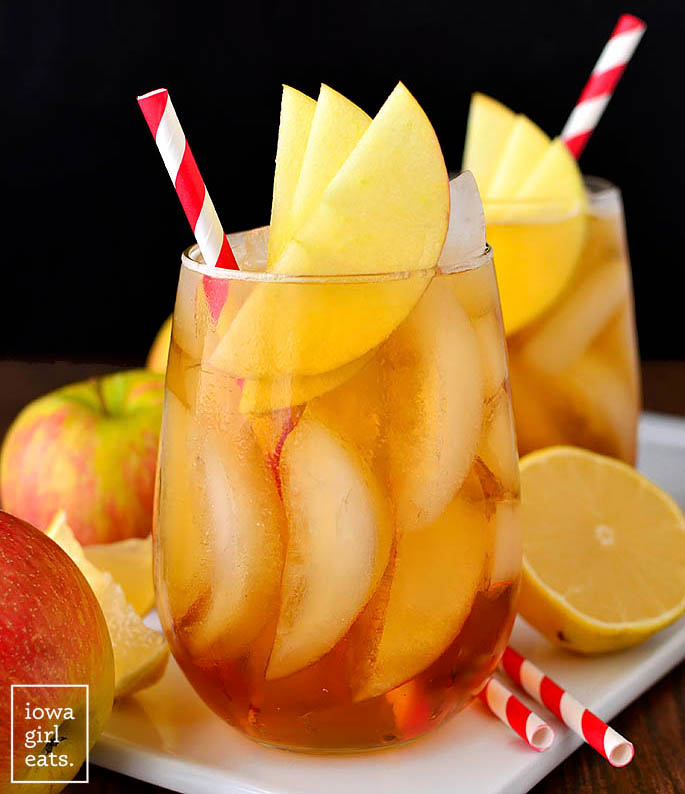 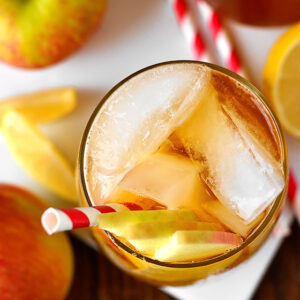 Sparkling Maple Bourbon Ciders are for when you're feeling extra giggly! Maple-swirled bourbon is topped with hard apple cider in this delicious, fall-inspired, 3-ingredient drink recipe.