Roasted Brussels Sprouts with Bacon, Shallots, and Garlic are savory, salty, and so darn good. Serve as a delicious, gluten-free side dish with dinner. 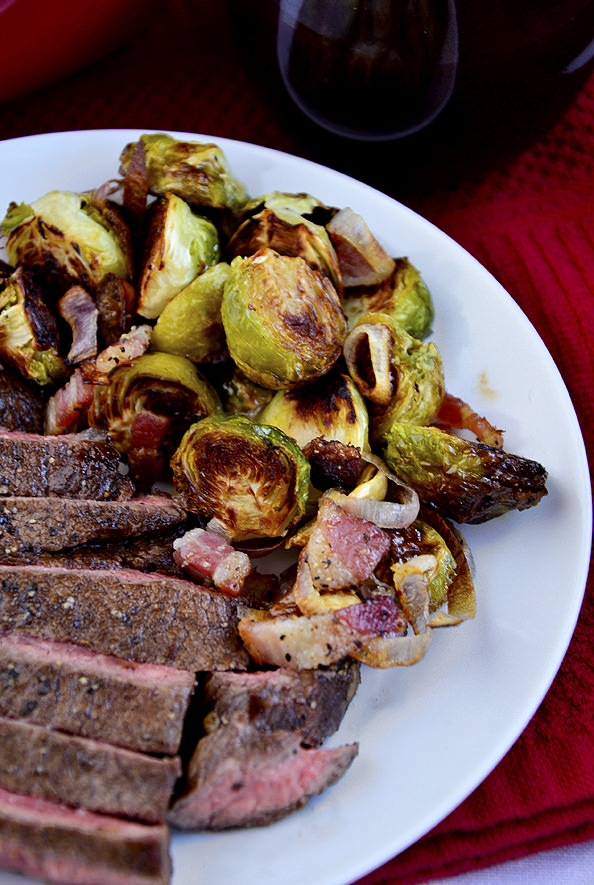 I think it’s safe to say the season that shall not be named is officially upon us, don’t you think?

The neighborhood trees are embarrassingly bare, the grass sparkles with frost in the wee hours of morning (though that hasn’t stopped my Mom and me from our walks! I’m not sure if that makes us tough – or crazy…) and leaving the house without a heavy jacket is no longer an option.

While in the summertime I feel guilty about coming indoors before 9pm, in the season that shall not be named it’s pretty much all I can do to keep the blinds up, and yoga pants off before 5pm. Ok that sounded weird, but I think you know what I mean.

After pulling the cord, and slipping into something more comfortable, dinner is quickly made and devoured, then Ben and I hunker down for the night, the twinkling Christmas tree providing our only light. It’s usually only 7:00 by then, but I secretly wish we could just go to bed already. The dark makes me so sleepy!

I stay awake for my favorite shows though, and well, because it’d be weird if I went to bed at 7:00 every night. Ben and I watch an embarrassing amount of television in the season that shall not be named, when I’d rather do anything else in the world then go out into the cold night.

Between The Big Bang Theory, Real Housewives, Revolution, Real World Challenge, The Bachelor/ette (Sean’s back in January!) Teen Mom, Gossip Girl and NBC’s Thursday night done right – our DVR can hardly keep up! What are your can’t-miss shows? 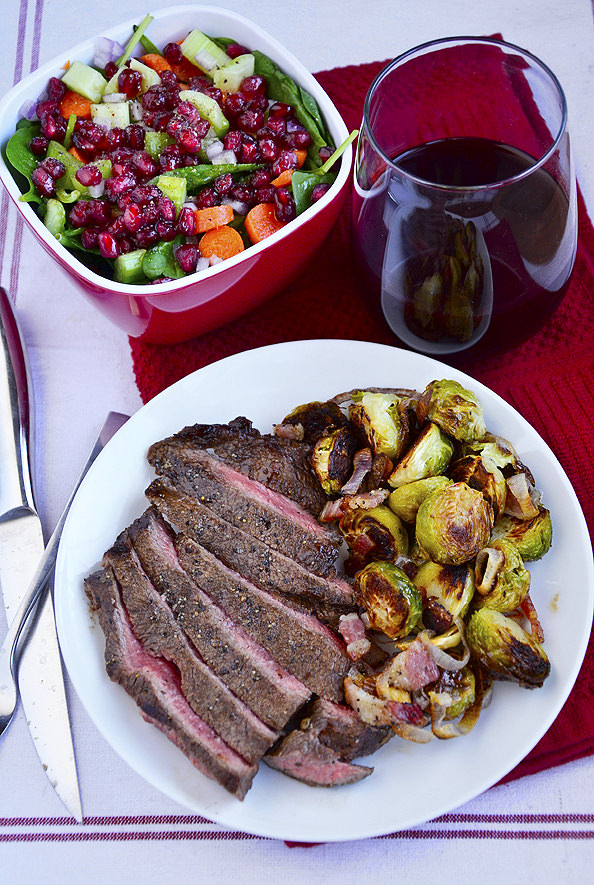 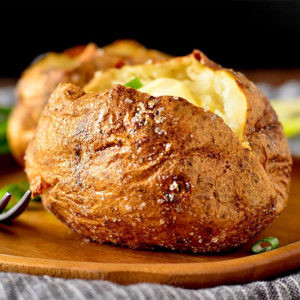 How to Bake a Potato

Though we both have our faves, Ben and I always come together to watch Top Chef every week, and this year, the spinoff Life After Top Chef, where 4 past contestants are followed around to see what their life is like after being on the show. It’s awesome!

I won’t go into it, in case you don’t watch, but last week one of the chefs, Jen, was opening her popup restaurant and serving this cah-razy side dish of roasted Brussels sprouts with bacon, shallots, and cranberries. I literally shouted to Ben – WHHHHHHAT did she just say?! and rewound the DVR to make sure I had heard her right.

Roasted Brussels sprouts with bacon, shallots, and cranberries?! I HAD to have it! And so I did last night, with a few modifications. :)

First of all, I axed the cranberries. I know. I wanted to give it a try, I really did, but if Ben didn’t like ’em then the whole dish would be deemed inedible, and I’d have to eat an entire tray of bacon, cranberry, and shallot-laced roasted Brussels sprouts all by myself. Wait a minute…

SO, I tossed a pound of Brussels sprouts with a couple slices chopped thick-cut bacon, a sliced shallot, smashed garlic, olive oil, salt, and pepper, then roasted the bejeezus out of ’em in a piping hot oven. The result was OFF THE CHAIN. Hands down our new favorite way to eat brussies! 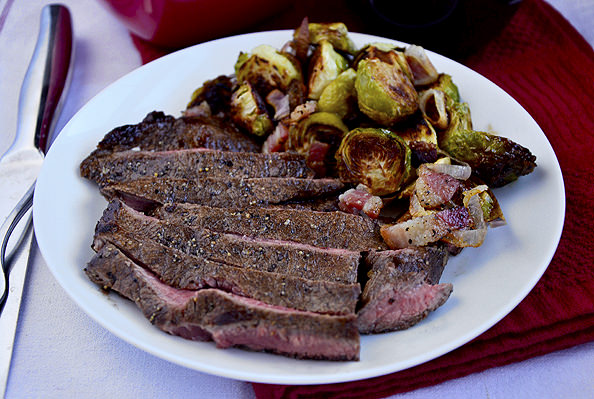 One cannot survive on Brussels sprouts, bacon, shallots, and garlic alone, (although one would have fun trying,) so I grilled marinated flank steaks for the main, and served a veggie-packed salad on the side. This was the best, cozy, hearty, flavor-packed winter dinner ever. There! I said it! 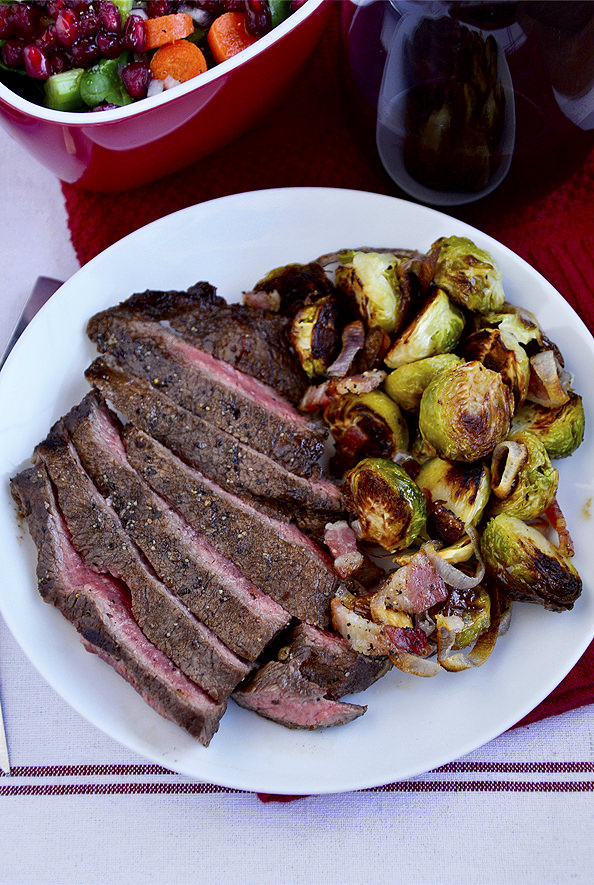 Start the Roasted Brussels Sprouts with Bacon, Shallots, and Garlic first. Preheat the oven to 425 degrees then chop 2 strips thick-cut bacon and add ’em to a big bowl.

Next trim then cut 1lb Brussels sprouts in half. I cut the core off, then cut the sprout in half through the remaining core so as many leaves as possible stay on the sprout.

Pull off the outer leaves that are dead or dry, then add them to the bacon bowl. BACON BOWL!

Peel then slice 1 shallot into 1/4″ slices next.

Then add 4 smashed garlic cloves. These babies MAKE this dish. The roasted garlic flavor will fill your whole house with a mouthwatering scent. 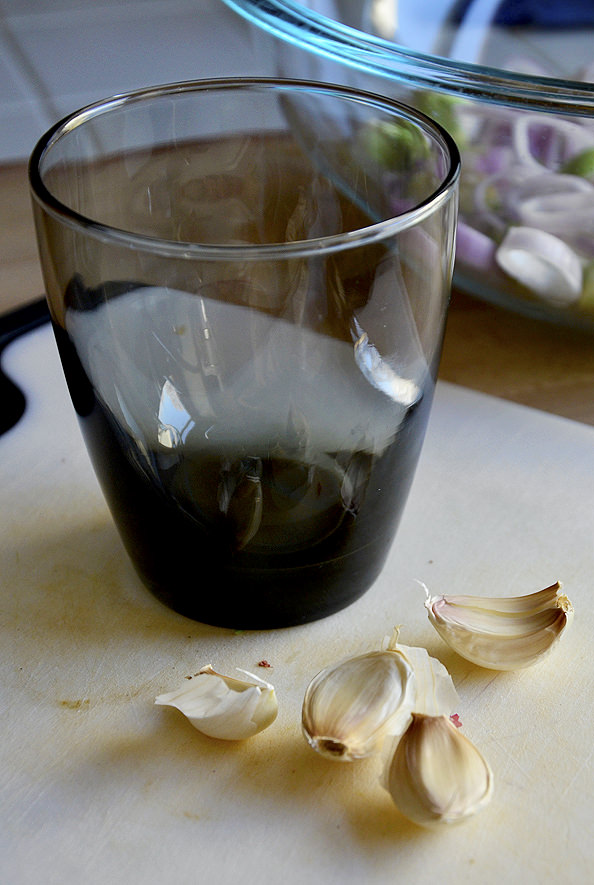 Tip: To easily smash/peel garlic, give each clove a whack with the bottom of a heavy cup or mug. Not only will they smash beautifully, but the peel will slip right off too.

Season everything up with 1 Tablespoon extra virgin olive oil, and salt & pepper. 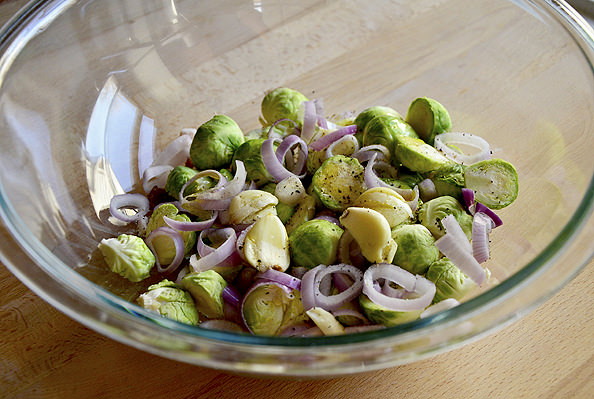 Then pour onto a foil-lined and non stick-sprayed baking sheet. Turn all the sprouts so they’re cut side down then try and get as much as the bacon and shallots to lay on top of the sprouts, so their flavors will permeate ’em while they roast for 20 minutes. 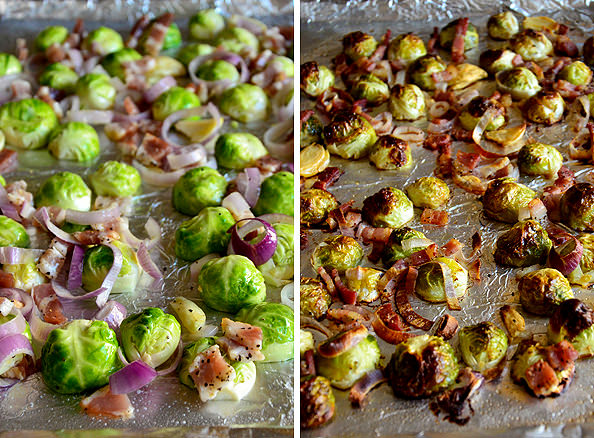 I can’t even handle this!! 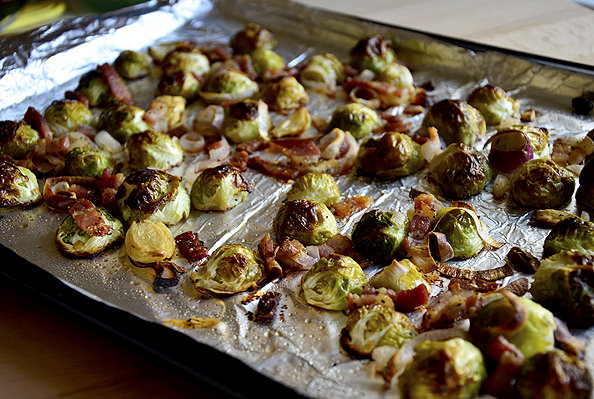 When the sprouts went into the oven, I pulled a flank steak I’d been marinating for 30 minutes in the fridge out to rest at room temperature for 10 minutes. HERE’S THE MARINADE RECIPE I USED > I followed it exactly, except I only used 3 Tablespoons balsamic vinegar because that’s all I had on hand. I’d still keep it at 3 T though, as I could definitely taste it! 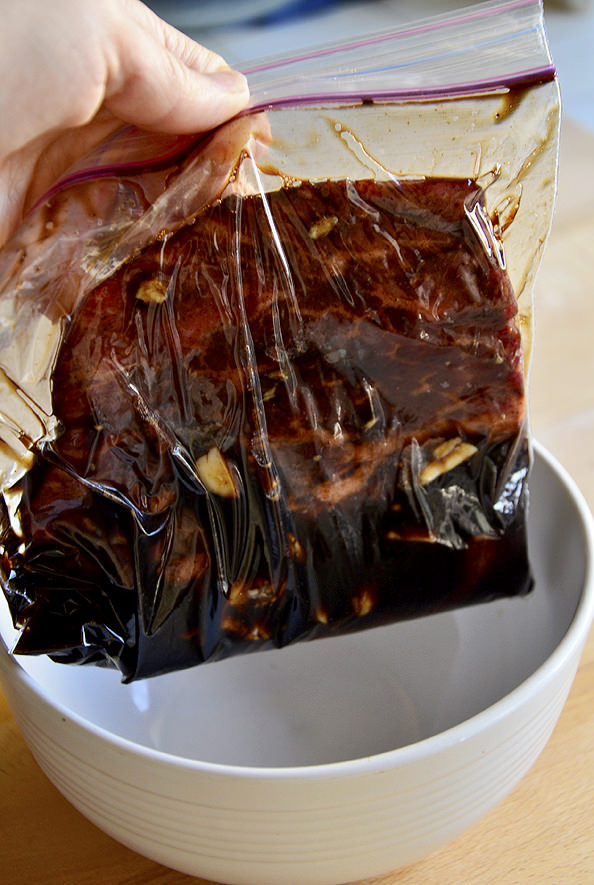 After coming to room temp for 10 minutes, which lets the meat cook more evenly, I seasoned both sides of the steak very well with salt and pepper, then grilled it on my Griddler. (<– great holiday gift idea!) 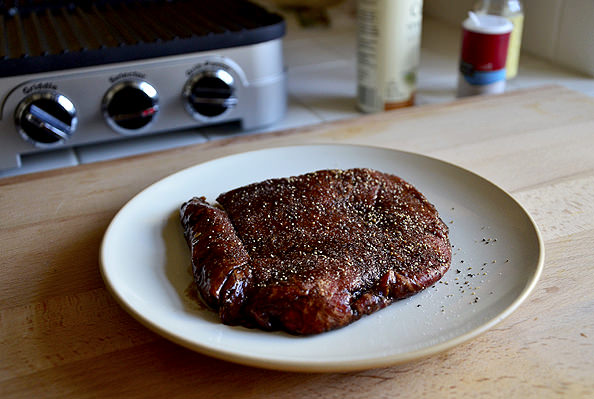 If you don’t have a Griddler, you can grill the steak outdoors, or pan sear. The trick with flank steak is that you want to cook it HOT and FAST. I turned my Griddler as hot as it would go and seared it for 3-4 minutes on each side for medium-rare/ok, rare. 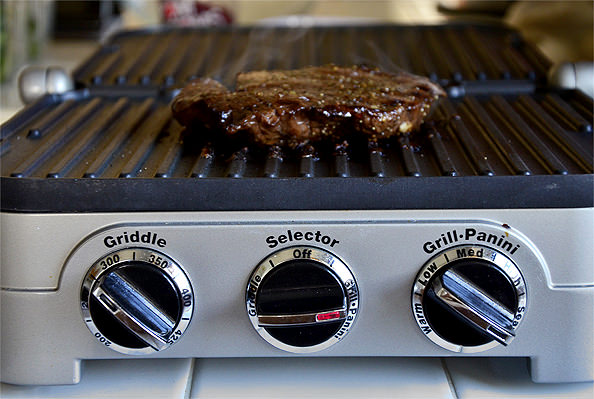 After the steak is done, let it rest on a plate for 10 minutes. If you cut into it right off the grill, all the juices will come out and the steak will be as dry as shoe leather. No bueno! 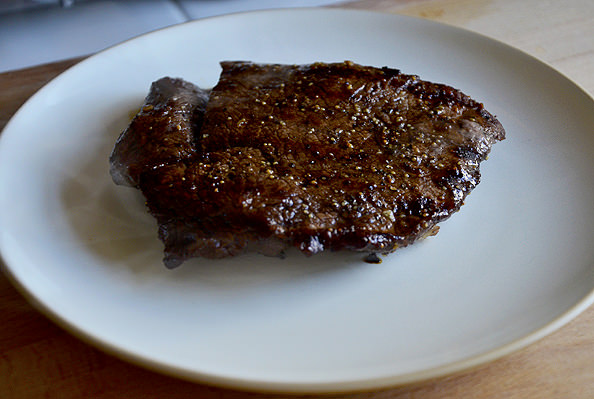 After the steak rests, slice it up against the grain then serve alongside the hot roasted Brussels sprouts! 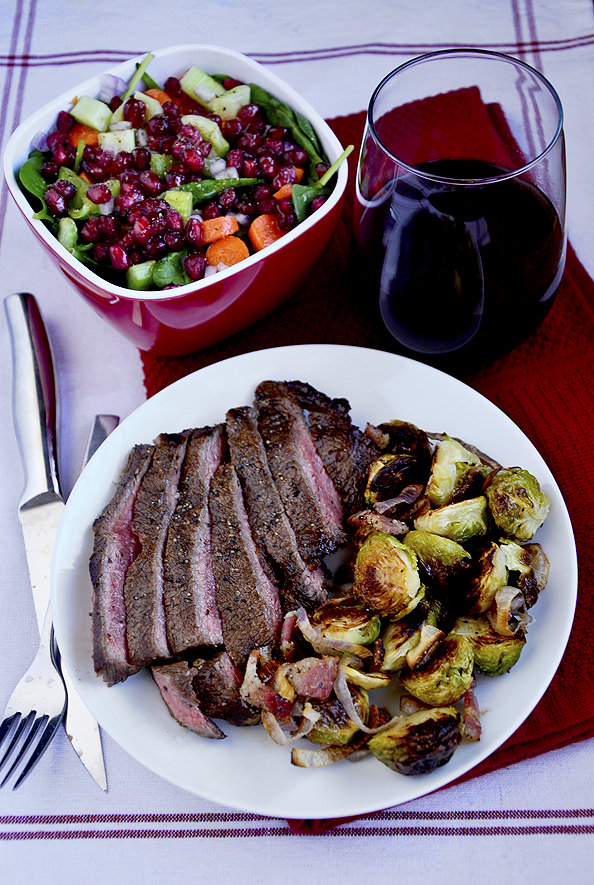 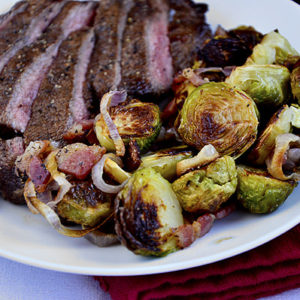 Roasted Brussels Sprouts with Bacon, Shallots, and Garlic are savory, salty, and so darn good. Serve as a delicious side dish with dinner. 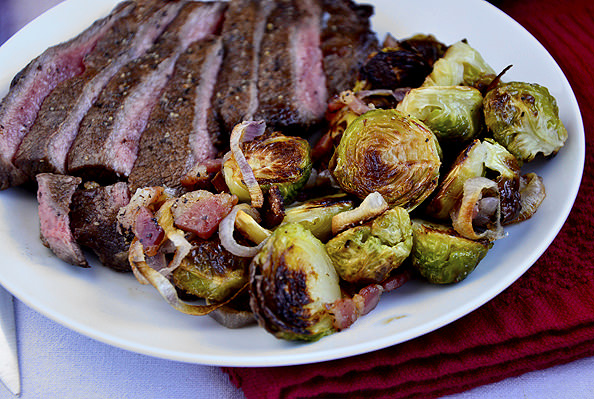 These sprouts could not have turned out any better. They were absolutely amazing! Everything was so crispy and full of flavor, and the soft roasted garlic cloves were to die. I would make this side dish any night of the week. Yum yum yum!  The steak marinade was awesome too. I only marinated the steak for 30 minutes and it still had tons of flavor. 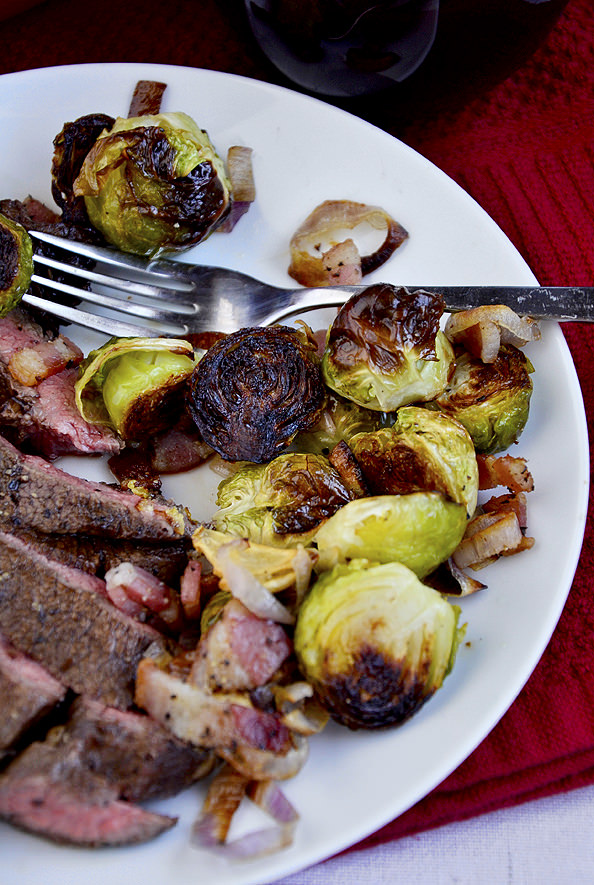 For something fresh, I served a baby spinach, carrot, celery, and pomegranate salad on the side, dressed with tuscan-herb olive oil, salt, pepper, and a drizzle of honey. I try and serve side salads with dinner as much as I can in the season that shall not be named as it’s an easy serving of veggies when the bounty of summertime produce isn’t available! 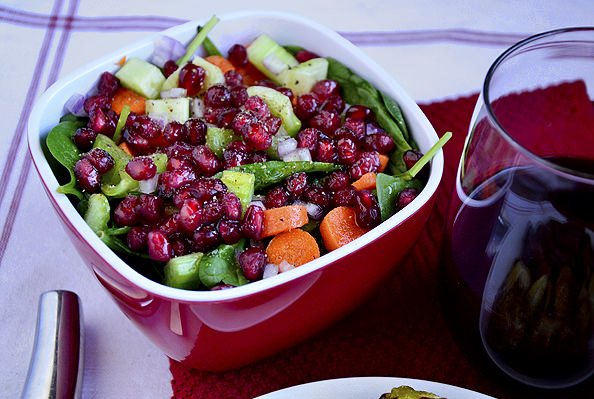 Being stuck indoors doesn’t feel so bad when dinner tastes this good. :)

In other news, who’s playing the Powerball tonight?! Brussels sprouts for all when Ben and I win!