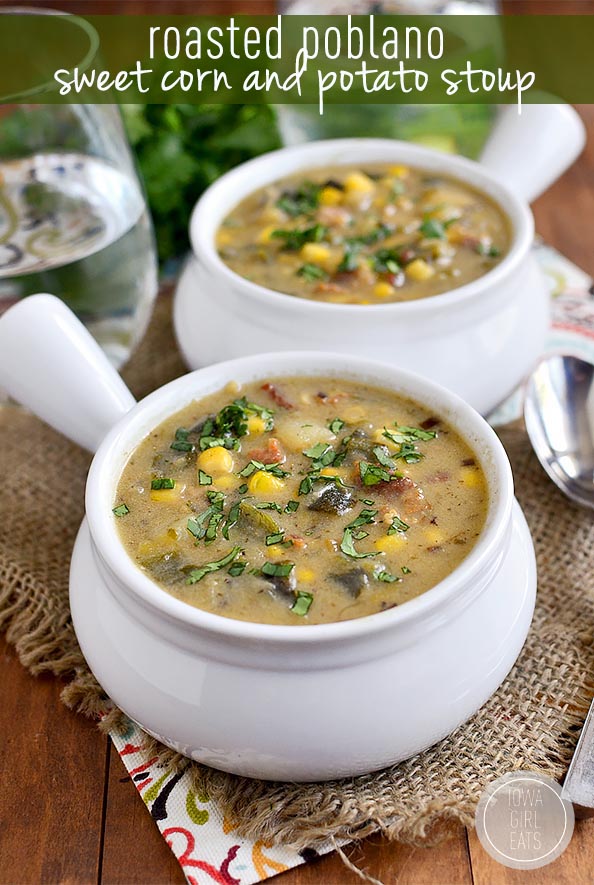 Have you ever worked crazy hard on something on your computer only to have said computer EAT IT ALL UP?! Microsoft Word, I’m looking at you. Isn’t it always Microsoft Word?? Or even worse, Excel? I can’t tell you how many times I’ve lost a ridiculous spreadsheet with a bazillion colors and cells and oh my gosh my blood pressure is rising just talking about it because faded screen and MICROSOFT EXCEL HAS STOPPED WORKING.

Would I like to send a report? Are you kidding me?

Anyway, I can only blame myself for losing the recipe for my beloved Roasted Poblano, Sweet Corn and Potato Stoup! 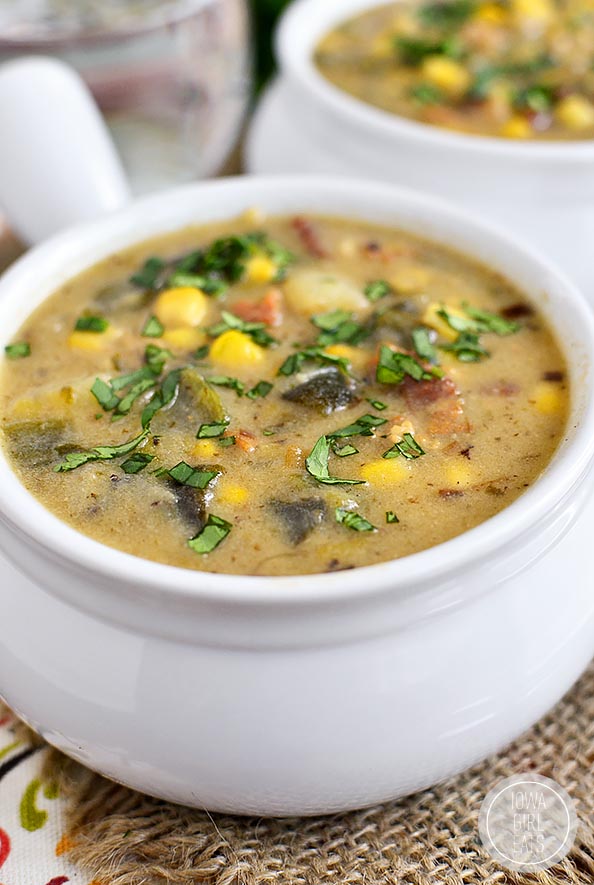 This is the final recipe I created using Progresso’s gluten-free chicken broth and it is SUCH a winner! I tested, tweaked, and tasted my way through three batches of the stoup before I hit all the right notes, and made all my taste buds sing, then lost the entire thing to the black hole that is my Evernote recipe file.

It was almost serendipitous though because I recreated the recipe from memory and somehow it came out even better than the previous versions! First thing’s first – repeat after me: we do not judge a stoup by its picture.

I am 100% aware that this stoup is not the prettiest looking thing in the world but I am telling you it is beyond delicious. I had three bowls of it in one sitting last week! Oh and stoup? Thicker than soup yet thinner than stew. It’s stoup, people! :)

The stars of this stoup are roasted poblano peppers which, if you made my Roasted Poblano Salsa Enchiladas from a few months ago, you know how delicious they are. Mild in flavor and with a warming spice, vs the in your face spice slap of a jalapeno, for instance, they are paired with caramelized leeks, potatoes, bacon, and sweet corn in this springy chowder that’s a touch spicy, savory, and totally fresh.

I’ve never been more aware of how much it rains in the spring time than I am with a toddler running around who begs to go outside night and day, rain or shine. These past couple of weeks we’ve seen absolutely beautiful days but really rainy days too where all I want to do is dig my slippers back out of the closet, toss on a black fleece ( ;) ) and curl up with a big bowl of soup.

This stoup is light and great for rainy days but even warm spring nights. Our Farmer’s Market just re-opened for the season (HALLELUJIAH!) and I can’t wait to pick up fresh ingredients like leeks, local bacon, peppers, and sweet corn to make it all summer long. 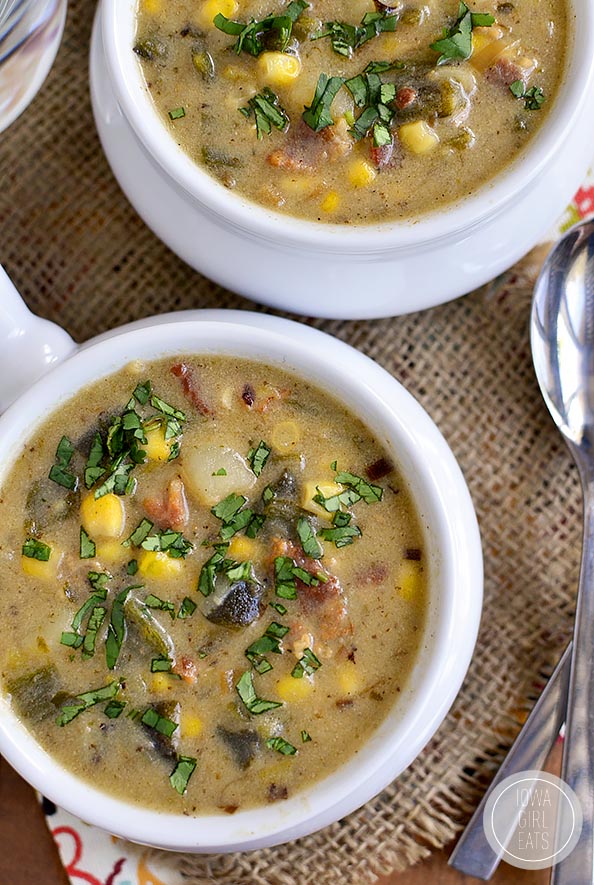 Start the stoup by roasting 2 poblano peppers. Just rub the peppers with a bit of extra virgin olive oil then roast at 425 degrees for 20 minutes, flipping halfway through. You can get poblanos right at the regular grocery store near the bell peppers and as I mentioned, they have a very mild spice. Probably too spicy for kids but just right for spice wimps like me! 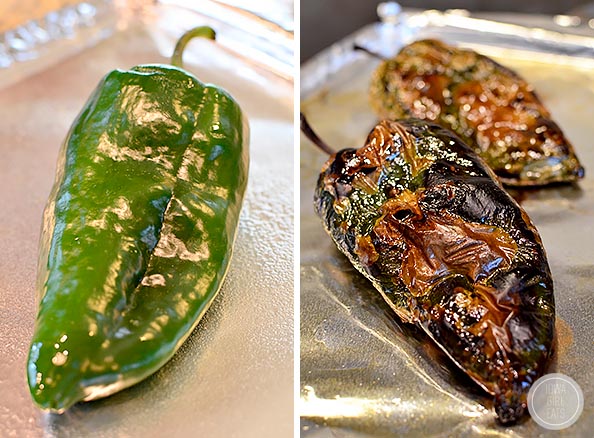 Transfer the peppers to a ziplock bag using tongs then seal ’em up and steam until they’re cool enough to handle, about 10 minutes. The steaming not only helps continue to soften and cook the peppers but it makes the skin super easy to peel away from the flesh. It’s actually kind of fun! Peel away that skin then remove the stem and seeds from each pepper (poblanos have very few seeds,) and then chop them up. Easy as that!

Meanwhile, get 6 slices chopped bacon crisping in a soup pot over medium heat. Between the sizzling bacon and roasting peppers, your kitchen will be smelling WILDLY delicious right about now. 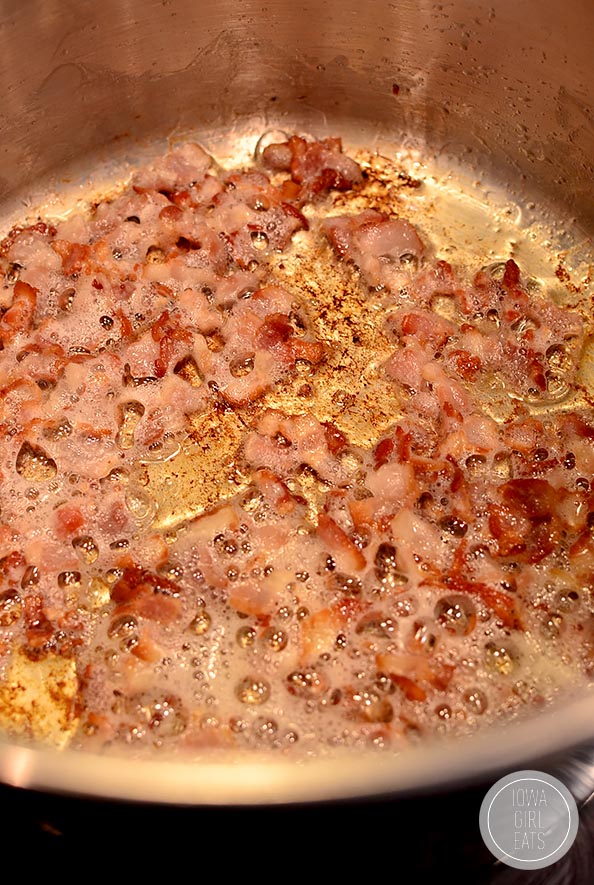 While the bacon’s cooking, prep 2 leeks. You just need the white and light green parts. Slice the trimmed leeks in half then into thin half moons. Leeks kind of have a mild onion taste and are absolutely amazing. I use them to make my Leek and Mushroom Chicken Skillet at least once a week! 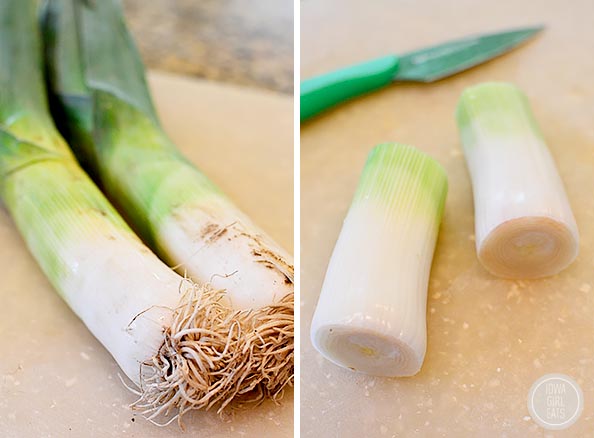 Transfer the bacon to a paper towel lined plate to drain then reserve 2 Tablespoons bacon grease in the pot and add the leeks. Season with salt and pepper then saute until caramelized, about 5-7 minutes. Add 2 garlic cloves then saute until fragrant, about 30 seconds. 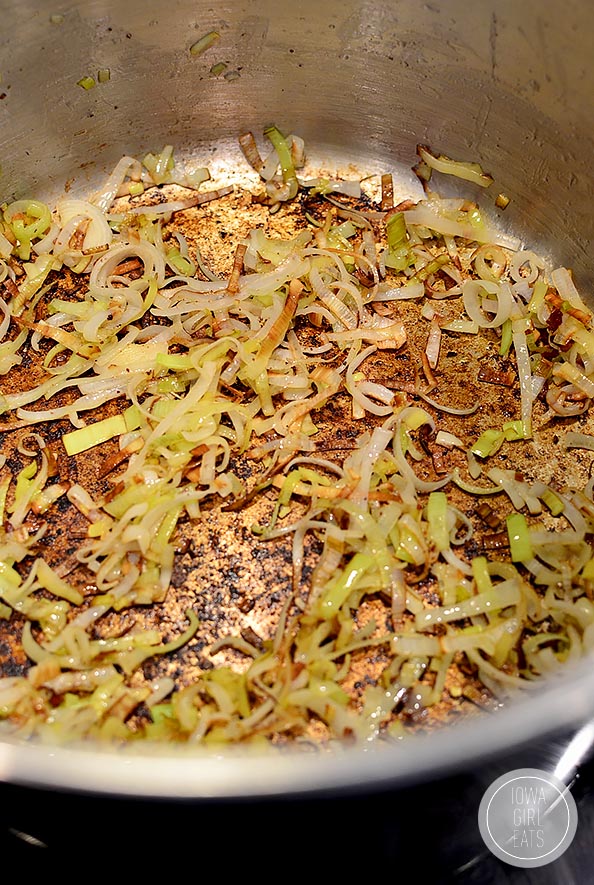 Next add 1 peeled then chopped potato chopped into 1/2″ dice (about 1 cup) and the roasted peppers. Looking at this now I see it’d make an excellent hash. Throw a couple eggs on it, right??

Alas we have stoup to make! Add 2 cups Progresso chicken broth plus 1-1/2 cups milk to the pot then season with salt and a truck load of freshly cracked black pepper. By the way I used unsweetened almond milk but if you’re using cow’s milk I’d use 2% or higher. 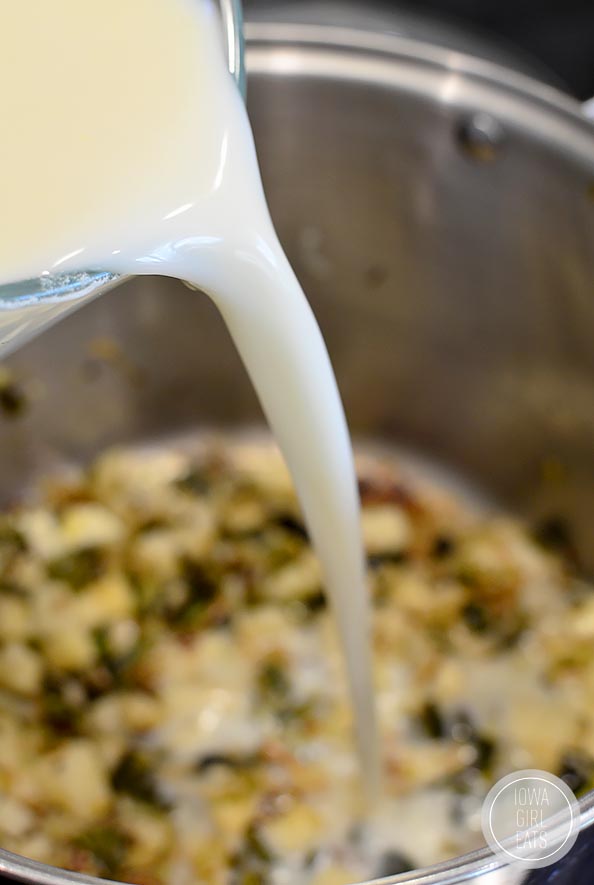 Turn the heat up to medium-high to bring the stoup to a bubble then turn back down to medium and simmer until the potatoes are tender, about 5 minutes. In a small dish stir together 2 Tablespoons gluten-free or all-purpose flour (stoup will not be GF if using AP flour,) and 1/2 cup milk then stir into the stoup and let it bubble until slightly thickened, about 5 minutes. 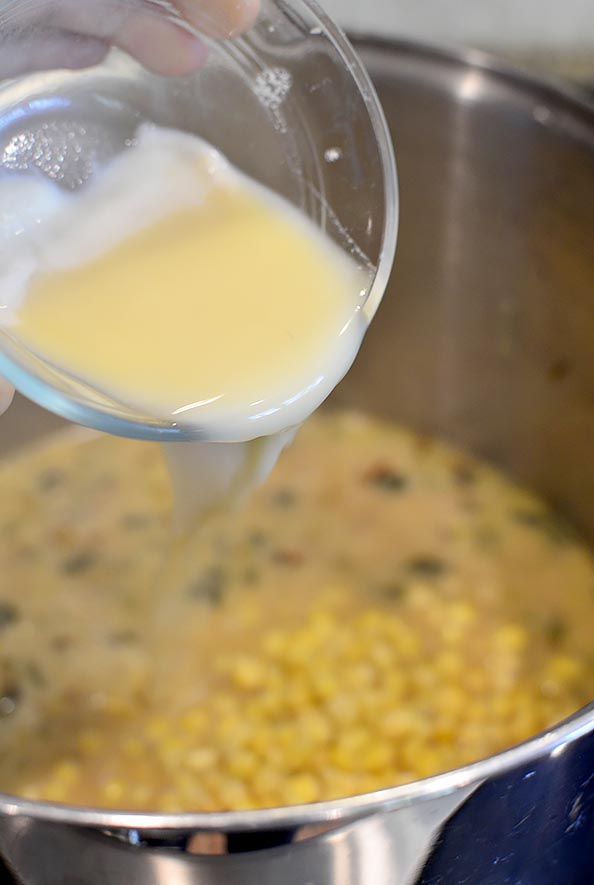 Last step is to sir in 1 cup sweet corn kernels and the cooked bacon then simmer until everything’s heated through. Taste and add salt and pepper, if ya’ need it, then ladle into bowls and serve sprinkled with chopped cilantro, if ya’ like it. Grab a spoon! 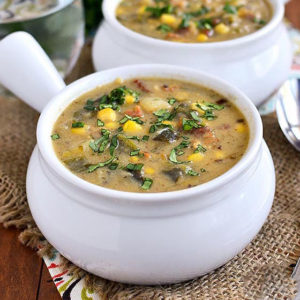 Savory and warming with satisfying bacon and potatoes, this stoup is a home. run. I loved the fresh sweet corn which cut through all the bold flavors too. Seriously, cannot recommend this stoup enough. Hope you enjoy!