Sizzling Steak Fajitas are tender and flavorful. Serve this simple yet stunning beef recipe any night of the week! 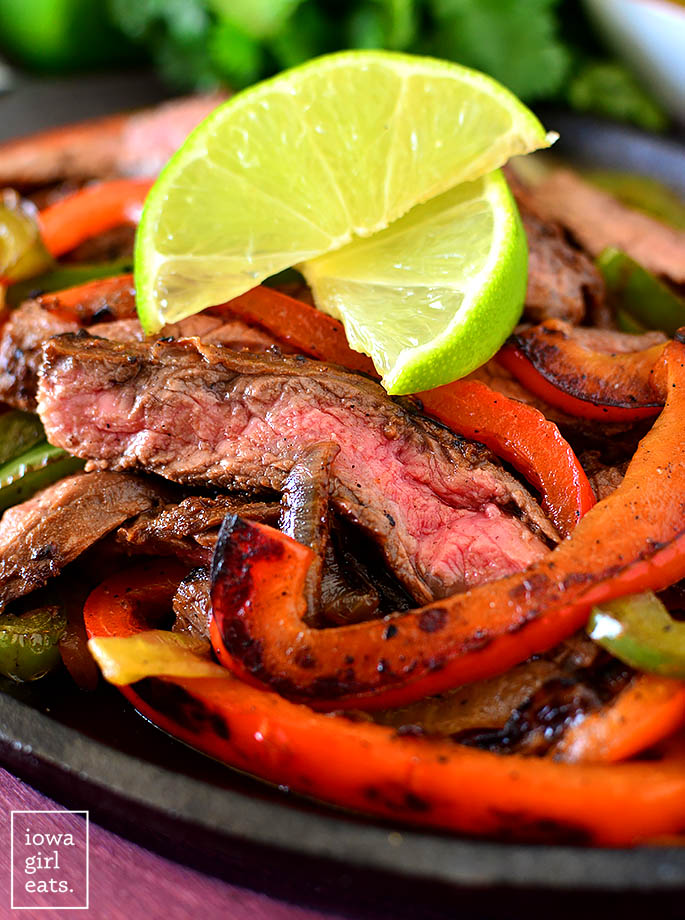 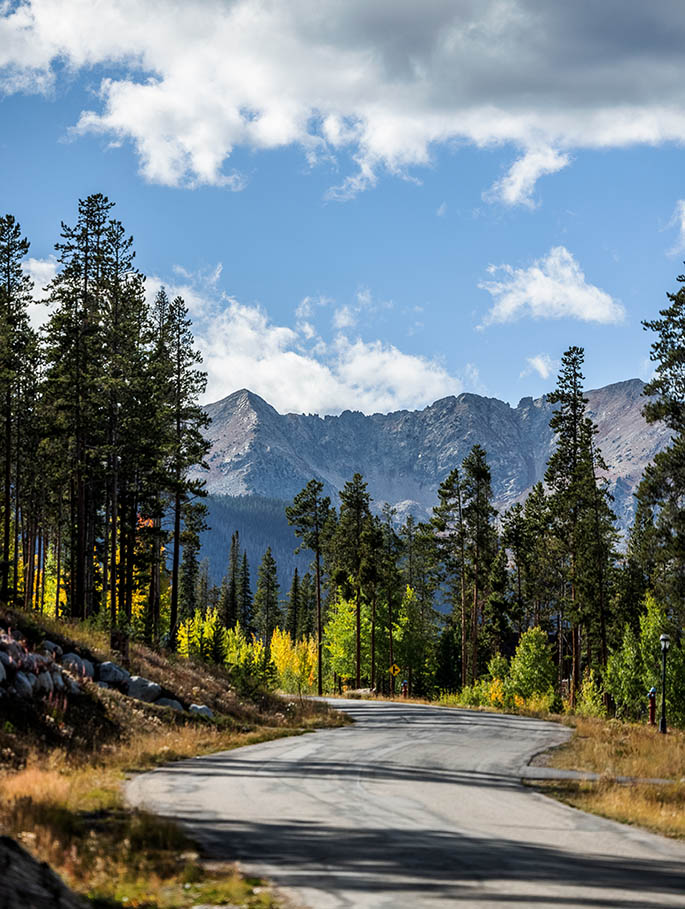 That said, a few weeks ago I felt incredibly lucky and grateful to get together with several fellow food bloggers to discuss all things food, business, and fun in a gorgeous, mountain-side cabin in Breckenridge, CO. Pinch me! 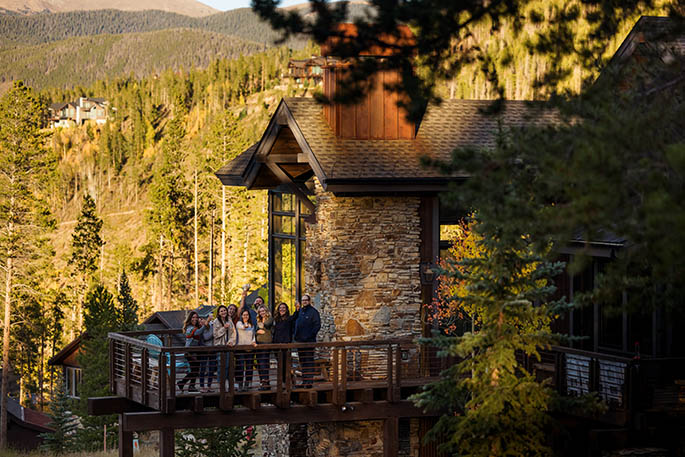 The “Fresh Air Retreat”, organized by Liz and Lauren, was the third retreat I’ve attended with these two incredible woman and, although it felt strange to be in Colorado without the kids and Ben, since we go as a family every year, it was such a treat being able to talk shop with people who have the same job as me — IN PERSON! The changing aspen leaves and crisp fall air were icing on the cake. 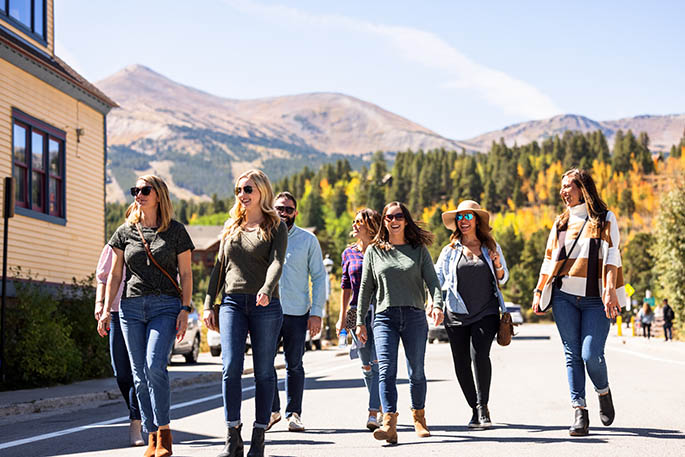 We spent the week not only sharing struggles we face in our jobs, but different ways we manage and grow our businesses (plus eating, and drinking all the wine in the whole wide world. WOO!) 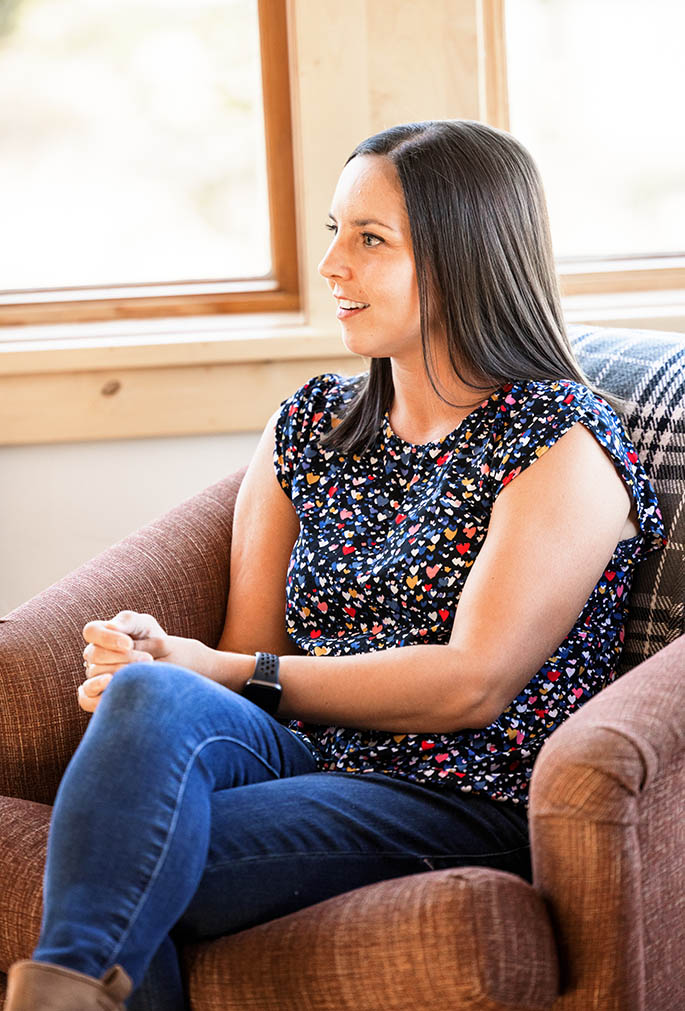 Of all the retreats and conferences I’ve been to, this was the most impactful and I credit the other mega talented attendees – Liz, Lauren, Jen, Brittany, Yvette, Tessa, and Dan – for leaving Colorado with tons of ideas and inspiration. 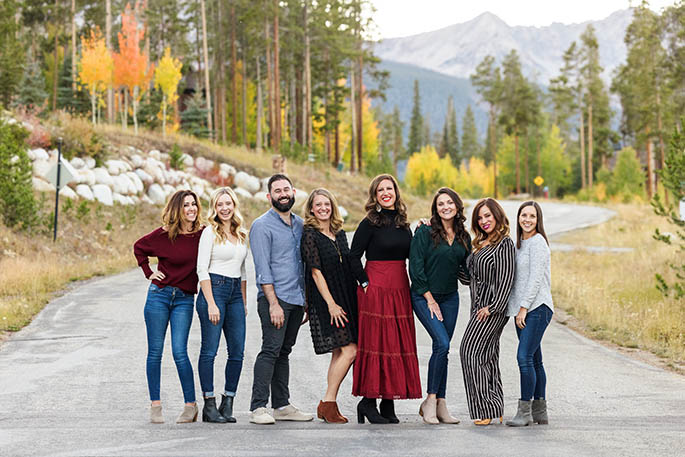 The Fresh Air Retreat was sponsored by the Beef. It’s What’s for Dinner., USA Pears, and La Croix, and one of the highlights was meeting pit master Rasheed Phillips, who flew in from Atlanta to cook for us one night of our stay. 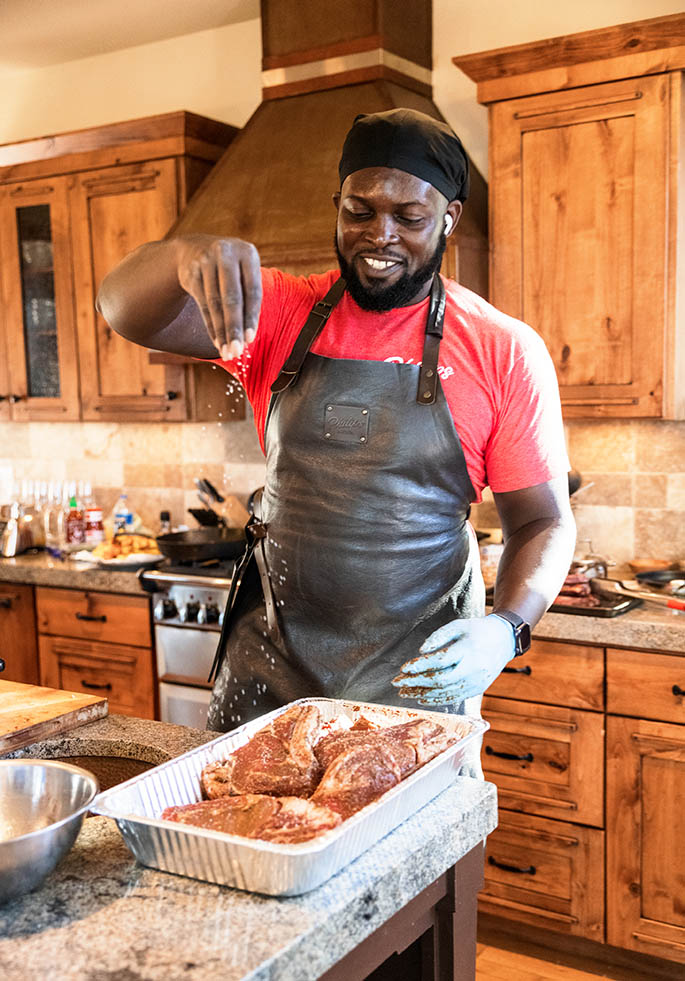 Rasheed competed on Netflix’s American Barbecue Showdown and it was literally a treat to eat his food and hear the inspiring story of how a child from Kingston, Jamaica ended up as a pit master in Georgia. I asked him if it was difficult cooking on a smoker/grill that wasn’t his own and he said: “Fire is fire.” 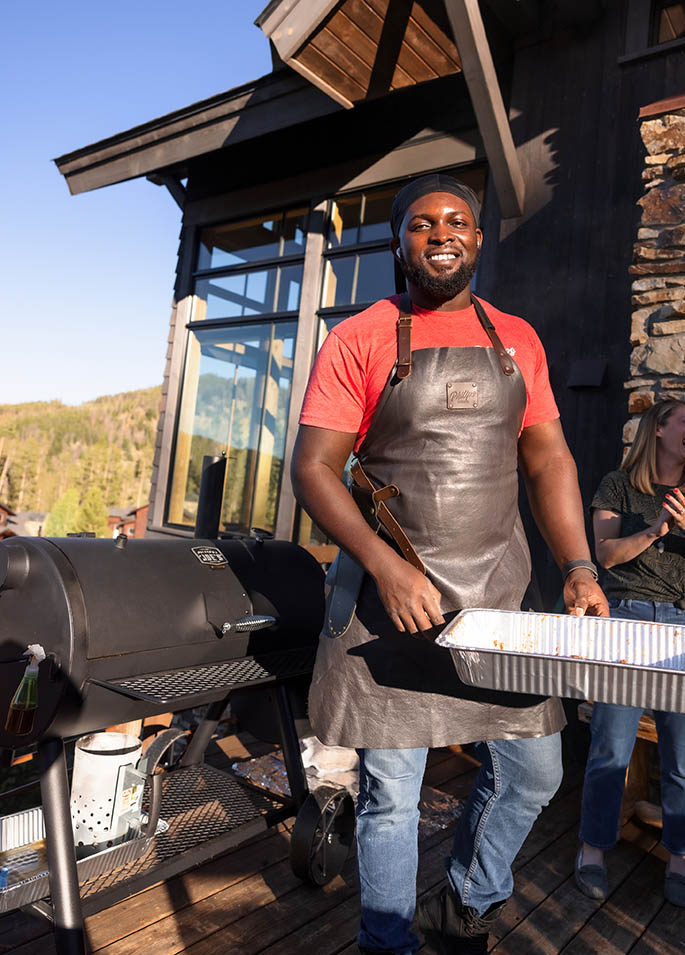 Inspired by the first course on Rasheed’s dinner menu — smoked then seared ribeye served over sizzling peppers smothered with jerk butter (I mean I can still taste it when I close my eyes) — I decided to create a similar supper to share with you: Sizzling Steak Fajitas. This simple yet impressive dish rivals any restaurant’s, yet can be made at home any night of the week.

Serve with guacamole and flame kissed tortillas, and you’re set! 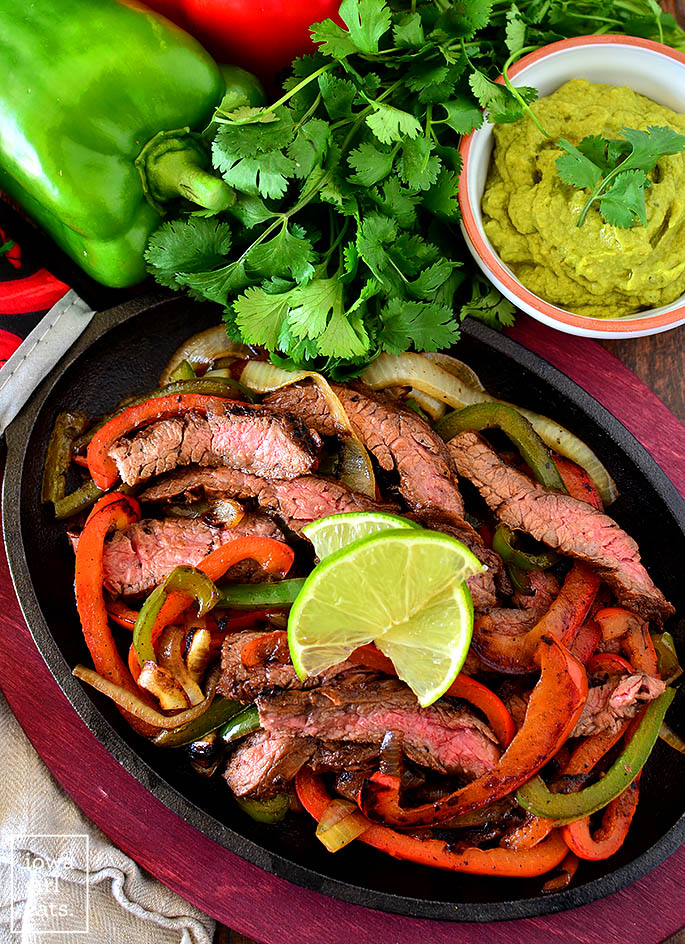 What Cut of Beef is Best for Fajitas?

Beef fajitas are typically made with Skirt Steak: a thin, tender cut of beef that comes from the underbelly of the cow. Skirt Steak cooks quickly at high heat and absorbs marinades well, which makes it an excellent cut of beef for sizzling fajitas.

If you can’t find Skirt Steak at your grocery store or butcher, opt for Flank Steak instead. Whichever cut you go with, be sure to let it rest after cooking then slice very thinly at an angle against the grain.

What Does it Mean to Slice Against the Grain?

Slicing “against the grain” is a term you’ll almost always hear when following a recipe for beef that’s going to be sliced or cut. Look for parallel lines within the cut of meat then thinly slice perpendicular or “against” the lines at an angle. This will give you tender pieces of meat that are easy to chew, vs chewy, tough-to-eat pieces. 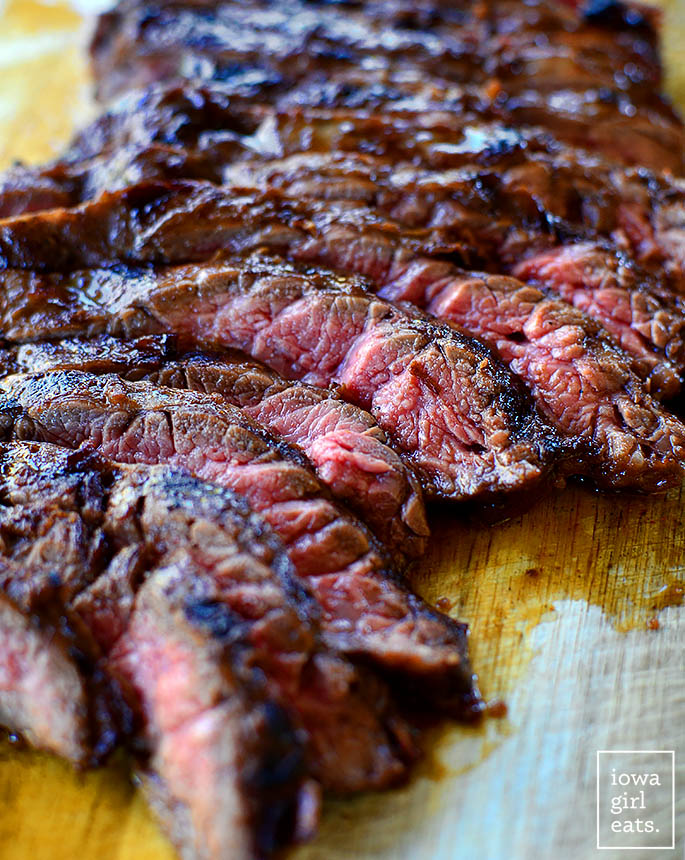 If you’ve ever tried my Best Ever Chicken Fajitas then you know that simple is best when it comes to flavoring meat for fajitas. Forget the heavy seasonings and seasoning packets – all the beef needs is a soak in lime juice plus a few aromatics like smashed garlic and green onion, and pantry staples like cumin and smoked paprika. Marinate anywhere from 3-12 hours, though honestly an hour will still get you where you need to be. 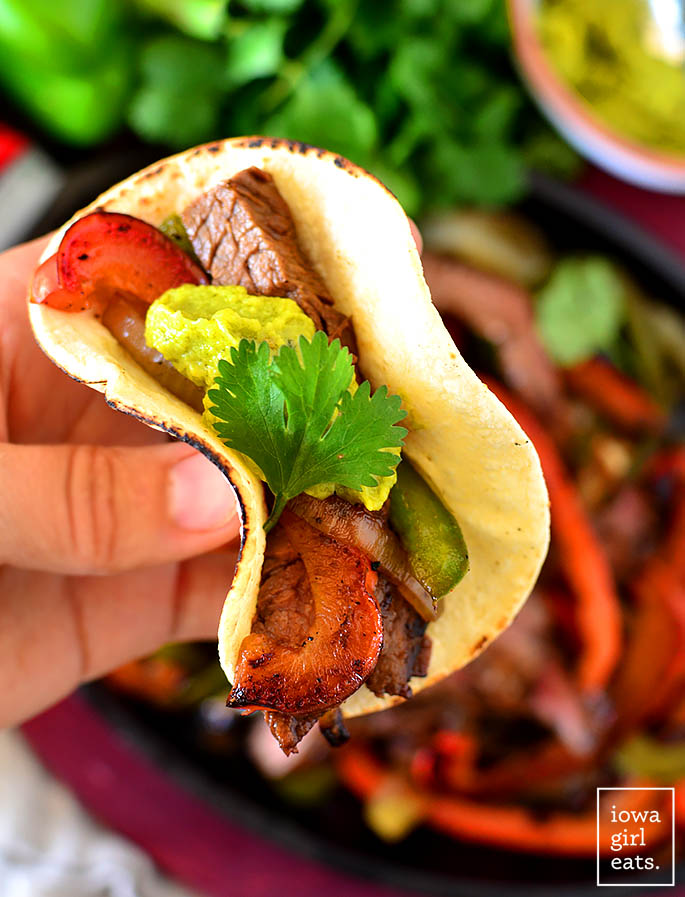 Start by trimming a Skirt Steak of any tough pieces of fat or connective tissues – a little fat left on the steak will flavor the meat so we don’t need to be too finicky here.

Now, the inside skirt typically has a thinner side and a slightly thicker side, so slice the two sections apart to make them easier to cook, slice, and serve. 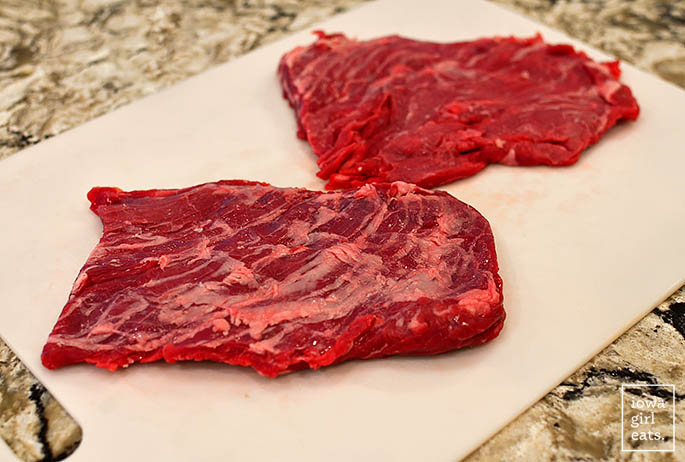 Add the trimmed steaks to a large Ziplock back with a marinade that includes fresh lime juice, smashed garlic cloves, gluten free Tamari, vegetable oil, brown sugar, green onions, cumin, and smoked paprika, if you have it. Massage to coat then pop into the refrigerator for 3-12 hours to marinate. 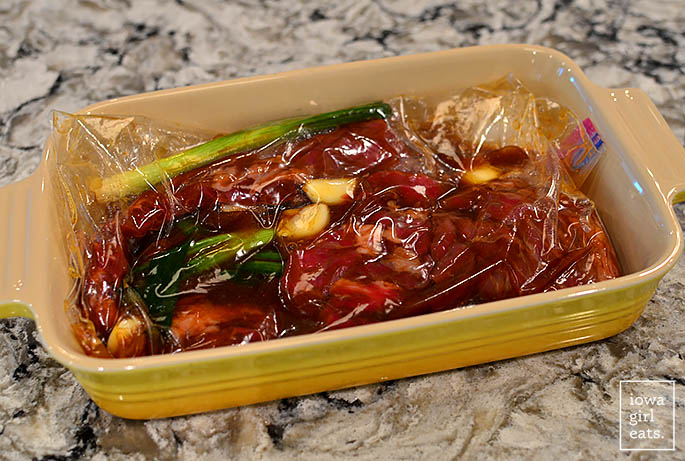 When it’s time to cook, remove remove the steak from the marinade then pat dry with paper towels and season each side generously with salt. Heat a large cast iron grill pan or grill over HIGH heat then, when it begins to smoke, brush or mist the grill pan with vegetable oil (no need to do this step on an outdoor grill), add the steak, and grill for 3-4 minutes per side.

NOTE: Be sure to have your hood fan on high – definitely set my smoke alarm off while sizzling this baby up! 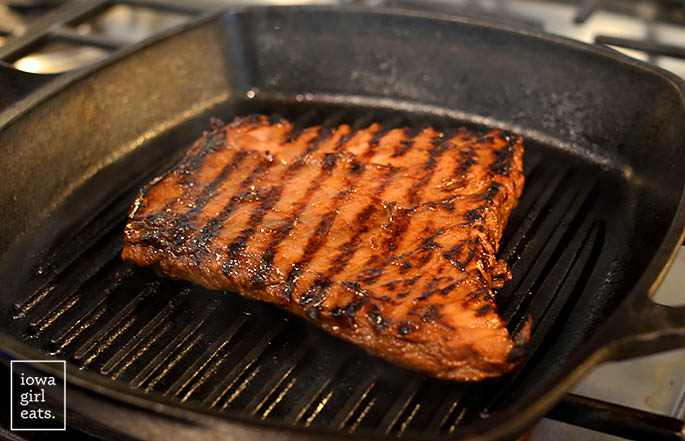 Remove the steak to a cutting board then let it rest for at least 10 minutes while you sear the peppers and onions. 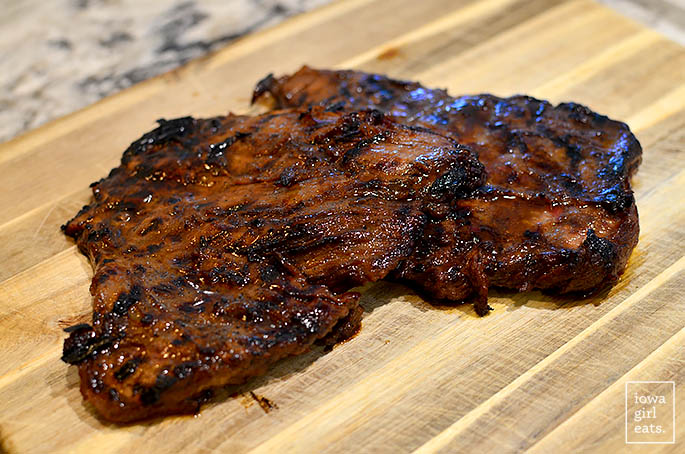 Meanwhile, heat a large, cast iron skillet over high heat on a burner next door. Once it’s screamin’ hot, add a thin layer of vegetable oil then add sliced bell peppers and onions. Arrange the vegetables into an even layer, season with homemade seasoned salt and a pinch of cumin, then let them sit undisturbed until the bottoms have seared, 2-3 minutes. Stir then continue to saute until the vegetables are crisp-tender, another 3-4 minutes.

Remove the vegetables to a plate then cook the remaining peppers and onions in a touch more oil, seasoning with seasoned salt and cumin. 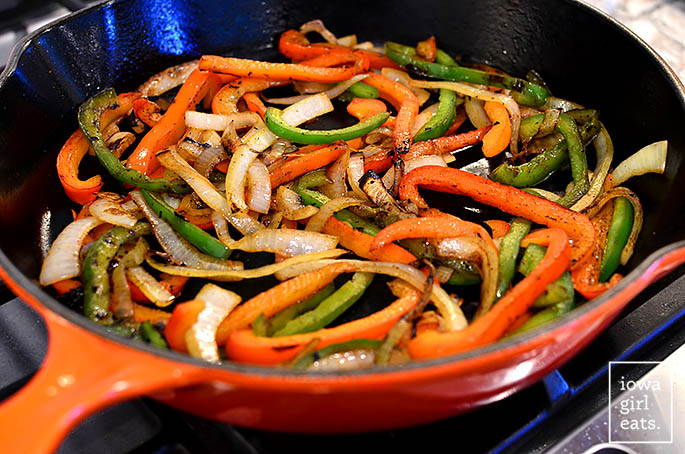 Last step is to thinly slice the cooked Skirt Steak against the grain then serve with the cooked vegetables, plus guacamole, and warmed corn tortillas, if you please. Sizzling, succulent, and such a treat – I hope you love these gorgeous steak fajitas – enjoy! 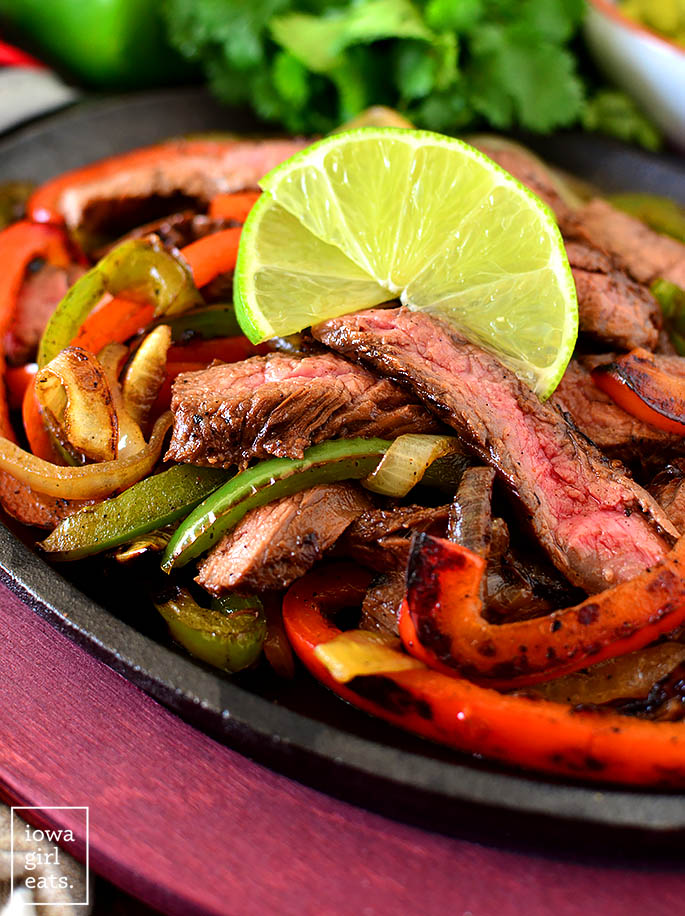 Sizzling Steak Fajitas are tender and flavorful. Serve this simple yet stunning beef recipe any night of the week!

Surf and Turf for Two