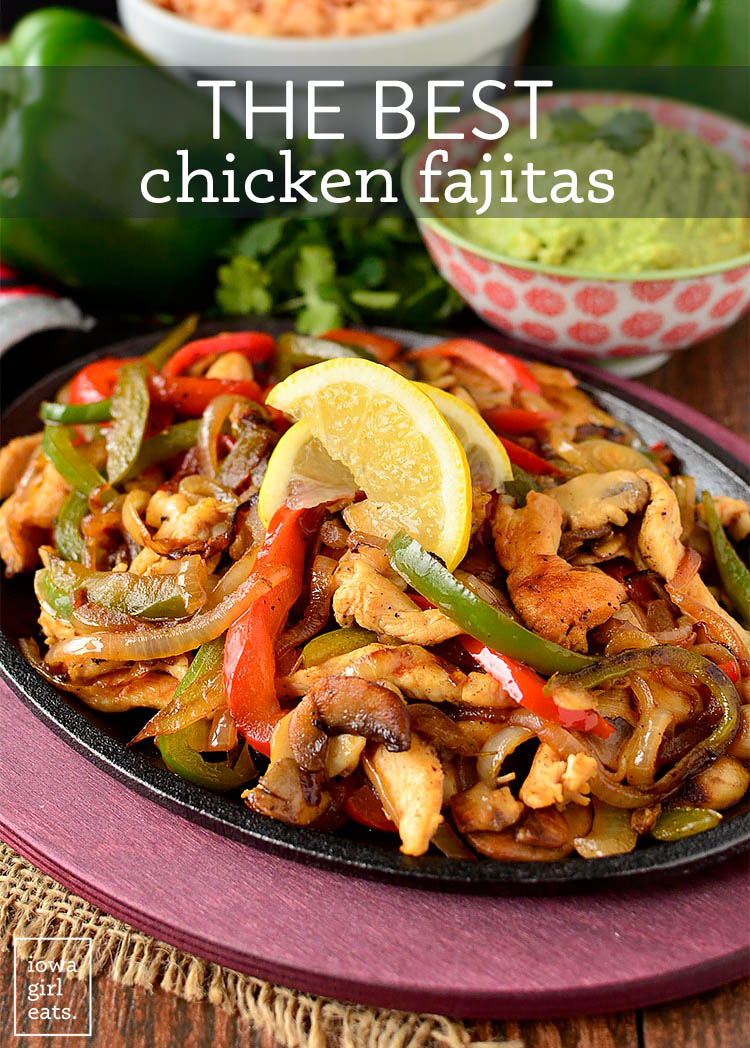 If you want to know what I really eat during the week (besides salami, this sauce, and so much of this) today’s recipe is it – the BEST Chicken Fajitas!

For years I didn’t “get” fajitas. Go all the way to a restaurant so I can assemble my own food? No thanks. Furthermore they’re filled with bell peppers which, up until last year, I couldn’t even look at in the grocery store. Thankfully, I’ve seen the light (and the fact that you can order your own fajita skillets on Amazon – can you even handle it?!) and have been making the best chicken fajitas weekly for the past 6+ months.

My journey to loving fajitas is not an interesting one so I’ll spare you the details (the CliffsNotes version is that I once tried Ben’s at our favorite Mexican restaurant and loved them. Ha!) Anyway, that was about 2 years ago and its been all fajitas, all the time since then. How much do you love hearing and smelling those sizzling platters before they even arrive at your table? 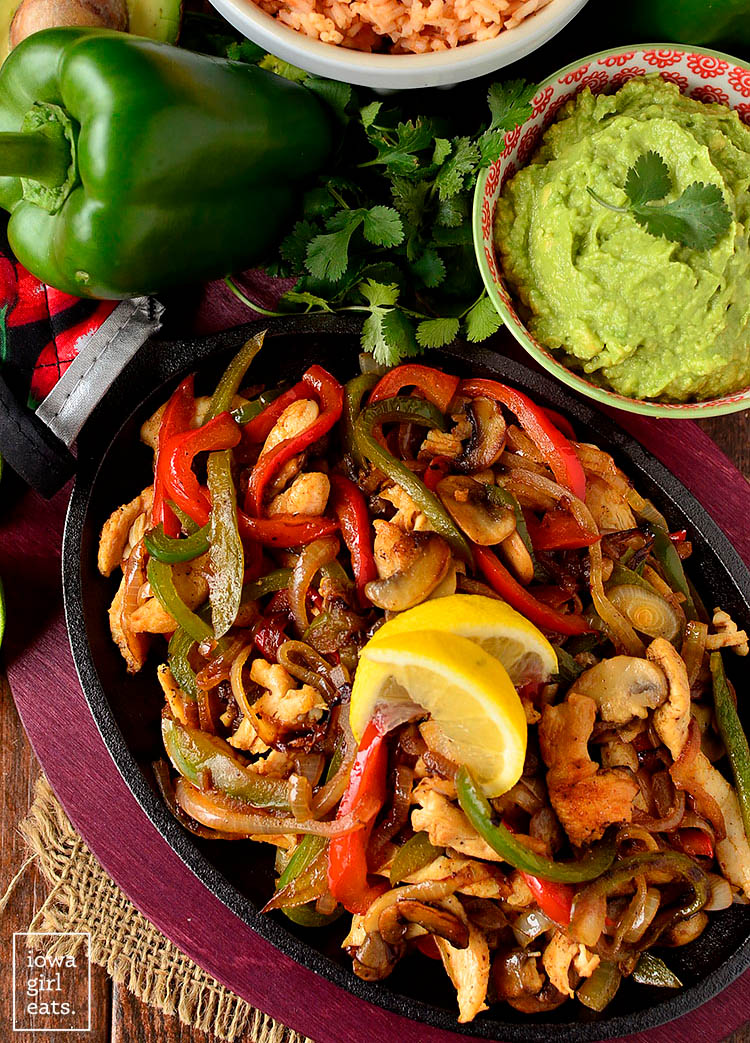 The first time I attempted to whip them up at home though, was a different story. It was actually a disaster! After mixing up a chili powder-heavy marinade then searing everything over high heat, the marinade burned and the resulting dish tasted nothing like the fajitas I was used to seeing arrive sizzling-hot at our go-to restaurant. I went back to the drawing board (or rather, Ben and his talented palate made their best guess as to what made our restaurant’s version so delicious,) and the recipe I’m sharing today is spot. ON!!

A margarita is also highly recommended. ;) Alright, let’s get cooking! 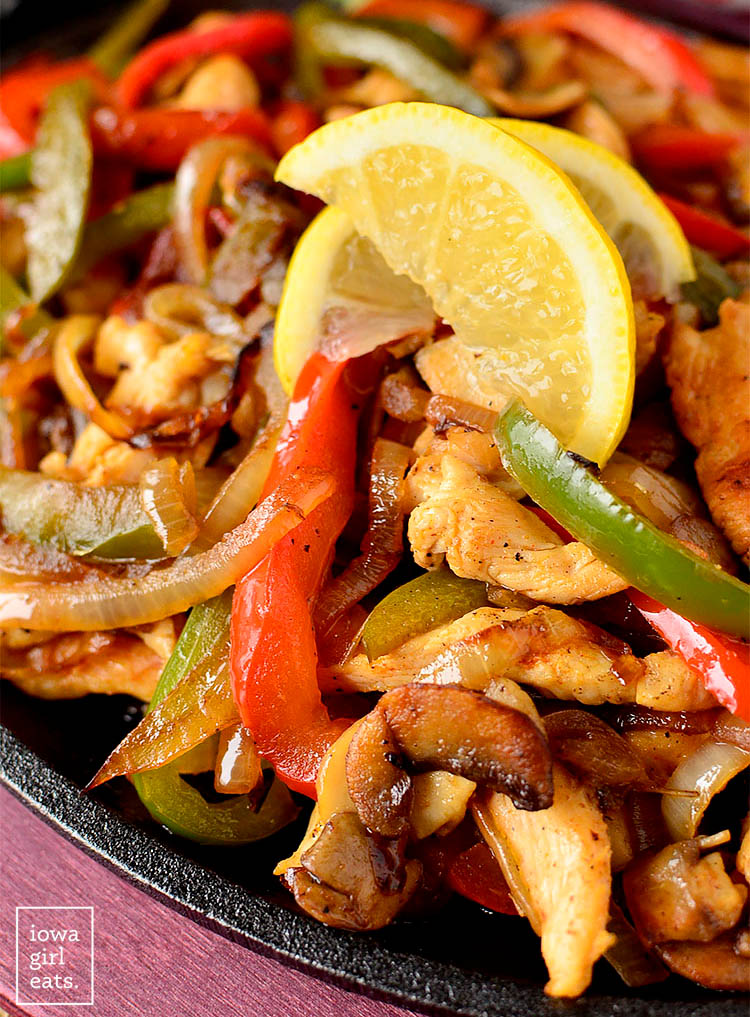 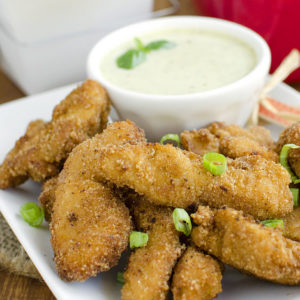 Start by chopping up all the vegetables. You’ll need 2 bell peppers, any color, 1 sweet onion, and 8oz mushrooms, all sliced thin. Tomatoes are usually included in my favorite restaurant’s fajitas, but I swapped them for mushrooms because tomatoes can easily turn to mush when seared at such high heat, and because, mushrooms. Yum! 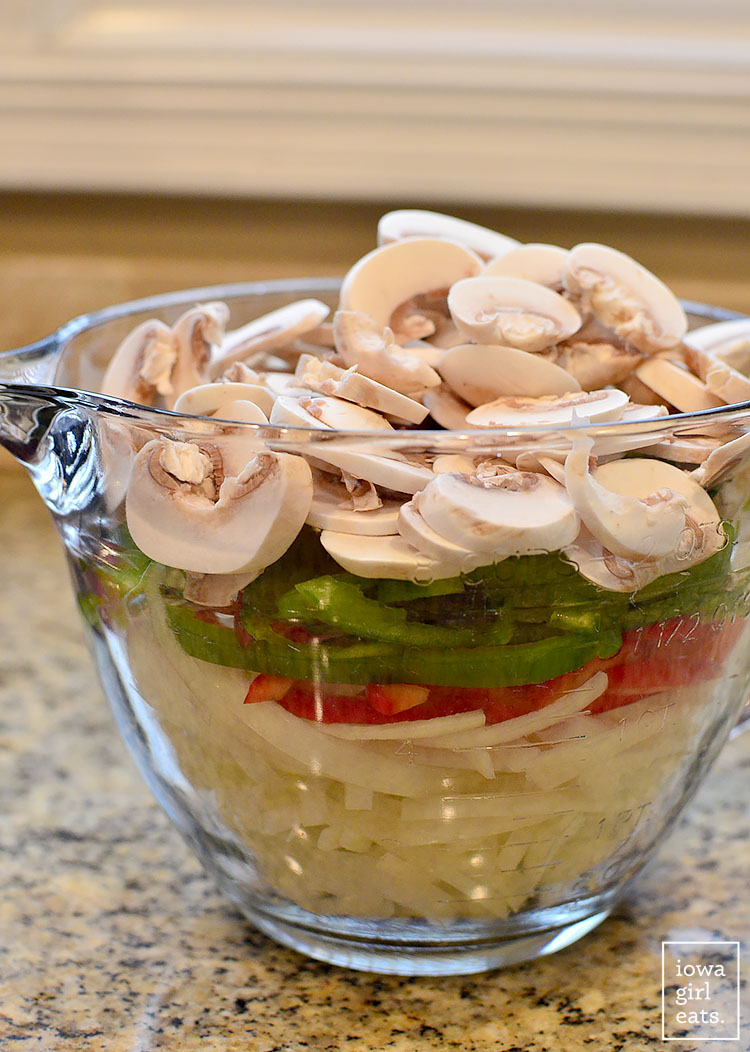 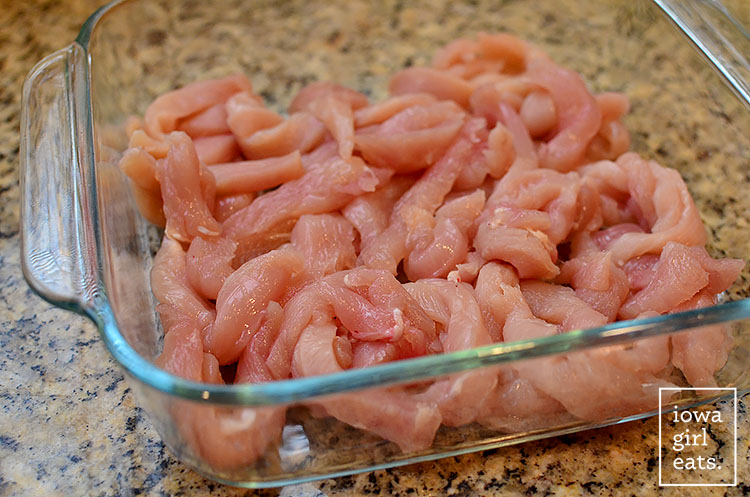 Time to get cooking! In a very large, preferably cast iron skillet heat 1-1/2 Tablespoons high heat cooking oil until it just starts to smoke. I used almond oil but you could use grapeseed or vegetable oil – whatever you have on hand. Add 1/3 of the vegetables then season with homemade seasoned salt, a dash of cumin, and a drizzle of fresh lemon juice. This combination is fresh, lively, and CRAZY DELICIOUS!!!

Let the vegetables sit in the skillet until the bottoms have seared, then mix and continue to saute until they’re crisp-tender, and then remove to a plate. Continue with the other 2/3 of the vegetables, searing them in oil and seasoning with the seasoned salt, cumin, and lemon juice. 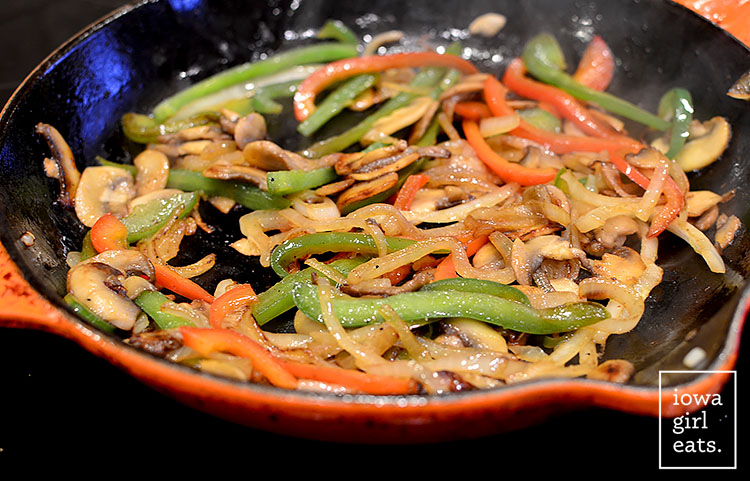 Last step is to heat 1-1/2 Tablespoons oil in the skillet then add the seasoned chicken. Add a drizzle of lemon juice then saute until the chicken is just cooked through, 3-4 minutes. 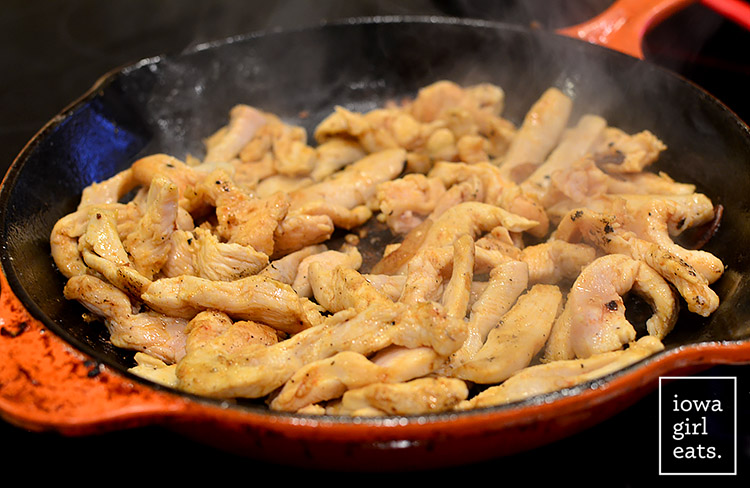 Add all the vegetables back into the skillet to heat through, then the fajitas are done! So easy, right? 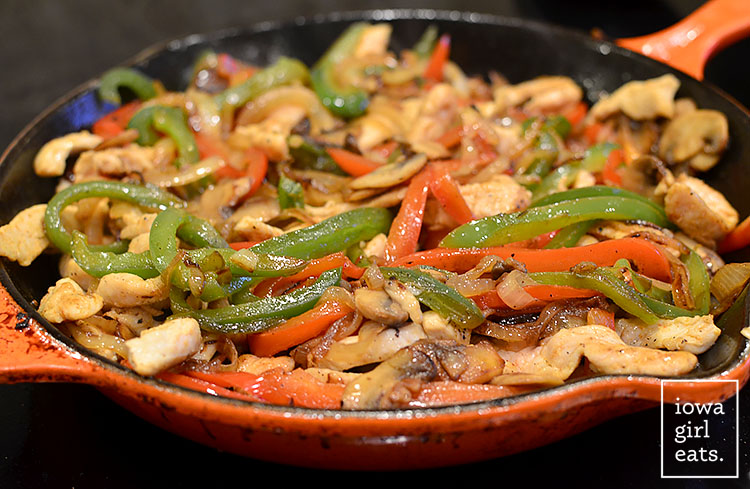 Scoop the chicken and vegetables onto plates then serve with rice, a mountain of fresh guacamole, and/or tortillas, and then dig in. I hope you love these easy, yummy, best chicken fajitas ever! Enjoy! 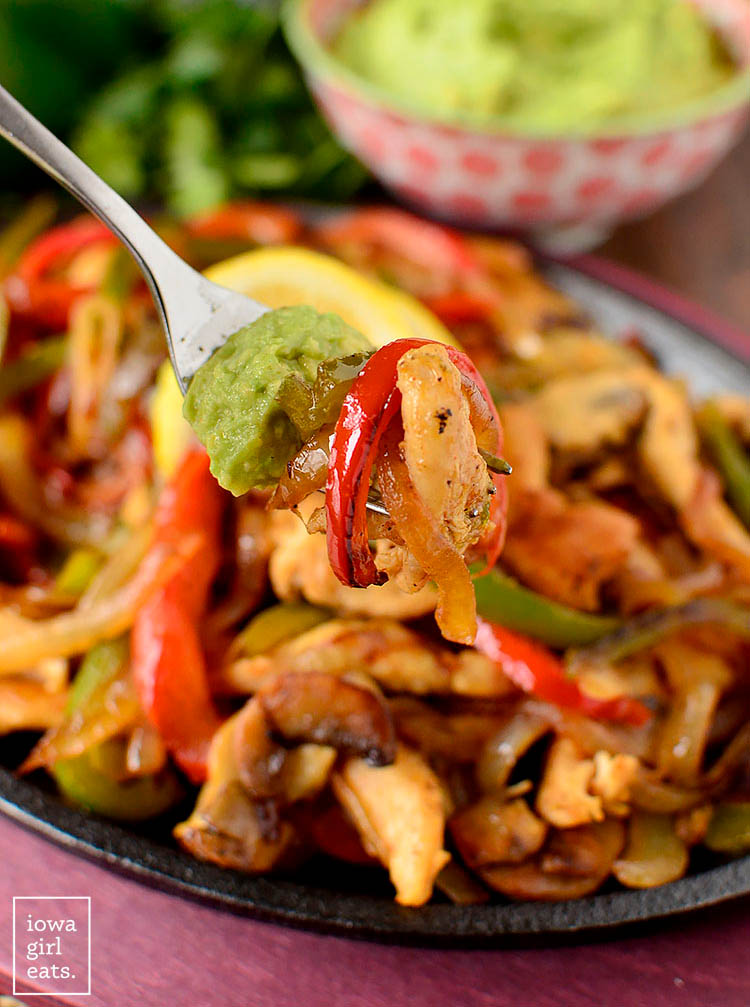 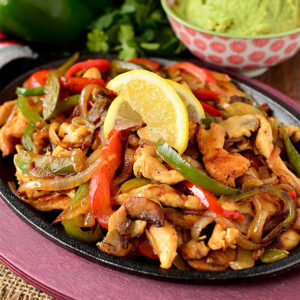 The BEST Chicken Fajitas are incredibly simple with no marinating step. Just chop then sizzle. Tastes just like a restaurant's version!